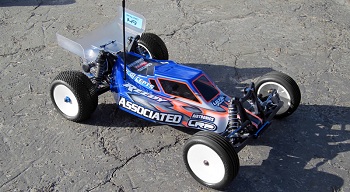 JConcepts hit the ground in Vaasa, Finland with an all new body design specifically for the IFMAR World Championships. Cleverly named, Finnisher, the unique design quickly rose to the top of the field during competition and proved effective on the ground and in the air. Designed with aspects learned from the Punisher line of bodies, the Finnisher provides an even more aggressive look with included details which remain crucial to performance. The +8mm B4.1 Finnisher body is a drop fit for a popular and World Championship winning modification to the length to the Associated B4.1 buggy.

With the evolution of race tracks, complicated circuits combining more aggressive jumps and extremely high-speed corners; JConcepts incorporated many features which provide several benefits in the most critical situations.

Increased windshield angle provides a steady force upfront during mid-flight wind gusts on large jumps. Forward cab placement changes performance / visible bias which helps steering rotation in low traction corners. The side-pods have been simplified and JC chamfered to remove unwanted changes in height to neutralize the at-speed handling. The chassis to body fit has been tightened up which eliminates empty voids that contribute to mid-flight directional changes. The rear of the cab has a new step feature which allows the placement of a secondary side window and also a louver which can be trimmed to allow air to escape at the top of the body.

In addition to the newly designed body, JConcepts has included 2 of the latest 6.5″ wide Hi-Clearance rear wings used by Ryan Maifield to take the TQ in the 4wd class and secure a 2nd place in the 2wd class at the IFMAR World Championships. 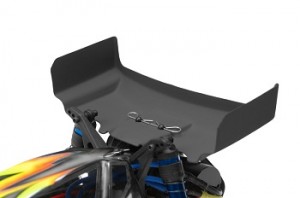 1/10th buggies are very dependent on the rear wing for traction, flight control and balance. The Hi-Clearance wing from JConcepts incorporates several important elements making it the most versatile JConcepts wing yet. JConcepts has joined the high performance new wing into a paired combination that is easier to trim, detail and finish. Each performance wing package now includes 2 wings for added value to the customer.Debuted at the 2011 IFMAR World Championships, the Hi-Clearance wing design has been used with success on medium to large sized tracks where fast, at-speed handling is required. The Hi-Clearance feature provides extra clearance for the expansion of tires during high acceleration points and especially on high speed straight-aways. The extra tire clearance also allows for full suspension movement during hard landings and full compression during corning. The 6.5” wing has multiple gurney heights to adjust straight-line stability for all conditions. The wing is marked and dimpled for quick mounting on the B4.1 and B44.1 buggies, the 6.5” wing can also be fit to almost any 1/10th buggy available.