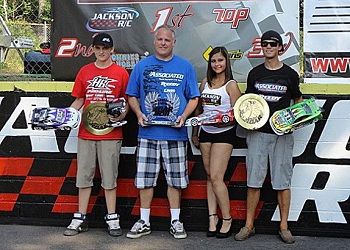 The 2011 ROAR On-Road Nationals took place July 28-31 at the beautiful Jackson R/C circuit in Jackson, NJ. Temperatures in the low ’90s and humid conditions with the occasional thunderstorm thrown in tested both the drivers and their electronics.

Driving a Team Associated TC6 powered by a Reedy Sonic 13.5 motor and 5500mAh 60C LiPo battery, factory team driver Rick Hohwart dominated the class by setting the fastest time in each of the four qualifying rounds to grab the pole position. From the pole, Rick was able to gap the field and maintain a safe advantage on his way to winning the first two legs of the final and the ROAR National Championship.

The power of the Reedy Sonic motor and LiPo battery combined with the precision control provided by an LRP SXX TC-Spec ESC allowed these drivers to drive to the top of the standings with confidence – even in the adverse conditions presented to them. Congratulations!