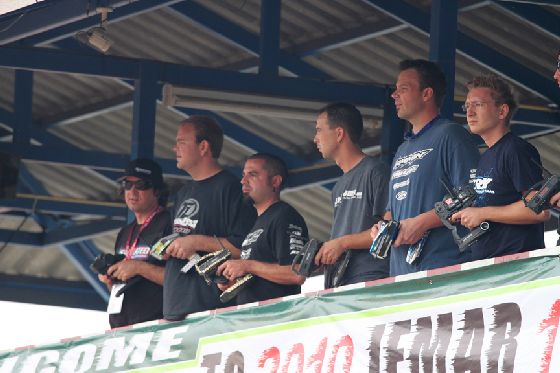 Day 2 in Pattaya was not off to a good start for many of the drivers.
The scene outside the Zign Hotel was a mob of drivers and mechanics waiting for the already late shuttle to transport them to the track. What was supposed to be a 25 minute ride turned into an 1:25 scenic drive since the driver made a few wrong turns. Many of the racers arrived a matter of minutes before their races and scrambled to grab their cars in a rush to the staging areas.

Track conditions started off well oiled but quickly deteriorated to dry and rutted. Pot holes and ruts became more and more prevalent throughout the day. Faces of jumps became rough and it showed as cars were flying in every which direction and car chassis were wearing thin. Saying this track is difficult is definitely an understatement.  The giant double in the back right corner of the track was always a spectacle to watch.

Jared Tebo threw done some unsurprisingly fast laps throughout practice and looks great going around the track. Frenchman Jarome Aigion set the fastest pace in today’s practice but many drivers are still trying out different tires an setups and not running the entire ten minute runs. Ryan Maifield, Atsushi Hara, Reno Savoya and Ryan Cavalieri were also throwing down some blistering fast laps in practice.

After watching many rounds of practice today, I must say that this is truly anyone’s championship. The only prediction that I’m going to make now is the winner isn’t going to be the fastest around the track. They will be the one who crashes the least and car stays in one piece. The track is absolutely brutal on both the drivers and the cars!

Tomorrow has another 2 rounds of practice in store for us. These will be timed rounds and determine seeding for the qualifiers.  The track will be getting some much-needed maintenance tonight. Once the racing starts tomorrow, the track will have to remain as-is for the rest of racing. This is getting good…