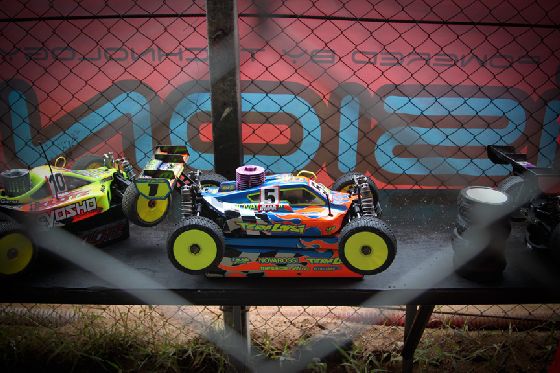 The weather this morning was back to typical. The skies are very overcast and the temperature is slightly cooler than yesterday’s sunny afternoon. The track is showing a fair amount of wear on the sweeper and the faces and landing of high speed jumps. The Dirt sections of the track look very loose and dusty. The concrete capped off camber corners are taking a darker color and have a bit of an oiled sheen.

Heat one started off with quite a few lead changes. Wheeler found his way at the top for a bit with Drake and Tebo Following. The win went to Billy Fischer creeping up from the middle of the pack with a solid run. All eyes were on Ryan Maifield in heat 2. He started off with what looked to be a comfortable pace and didn’t show any mistakes early. His second lap was a smoking fast 44.7. It looked as if we were going to see Maifield put down back to back to back TQ runs. It wasn’t until the last few laps of the race when he started to show being human after all. He made an unforced mistake on the sweeper and found himself on his lid. Its not a good place to crash as marshalls seem a little timid to jump on the sweeper as cars come through full punched.  Hara was on a 14 lap pace for most of the race and a few mistakes left him with a 13 lap run but took top honors for round 3 with a 13/10:09.99.

The order of the heats today have been running 6-15 followed by 1-5. Midway through heat 14 of round 4, the skies cracked and the rains came. Heat 15 was sent out on the track and the race director called for a 25min delay in hopes of the rain passing. This sent many of the early round drivers scrambling to mount up softer tires again.

The rains came and went rather quickly. After the 25 minute delay the track was almost dry again. One thing that has stood out to me today is that not one single driver had a flawless or even close to flawless run. Fast laps are still there but every driver has been caught at least once by the ruts in the track. I caught up with Jared Tebo watching the race before his and asked him about tire selection after the drizzle. He shrugged his shoulders and said, “I don’t even know.” His final choice was AKA soft City Blocks up front soft I-Beams in the rear. Tebo piloted those to TQ the 4th round with a 13/10:09 which also put him up top for the overall points lead after 4 rounds. Off his double TQ’s from yesterday, Ryan Maifield had a bit of a reality check today. “My car was working really good, I just made a few driving errors and had a bit of bad luck” said Ryan at the end of the day. His first round was mediocre and he landed hard in a rut during his second round which popped a center drive-shaft out of place. After the day he dropped down to 36th overall. Team Losi’s Billy Fischer had another good day and already has 4 solid runs in his bag, finding himself in good position overall. Ryan Cavalieri looks like he figured out a few things with his car, put down 2 top ten runs today and find himself 4th overall. He switched to Proline Calibers up front with Revolvers in the rear. This is a tire combination that they tested and liked in practice but just went back to it today.

More rain is expected tonight so I cant wait to see how the dynamics of the track change even more.