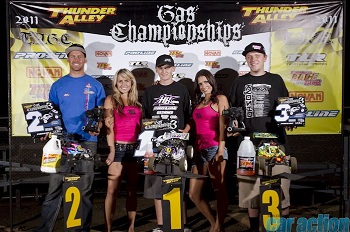 Pro-Line Team Driver Ty Tessmann Sweeps at Thunder Alley Gas ChampsThis past weekend (September 24-25) marked the 3rd annual Gas Championships held at Thunder Alley RC Raceway. This year the Gas Champs attracted top drivers from around the world for some intense competition! 172 drivers battled it out in the heads up double A-Main racing format and it was Pro-Line team driver Ty Tessmann who brought home the win in both Expert A-Main events!

“Levi Jackson outdid himself once again, building one of the most gnarly tracks!” said Tessmann, thanking the organizers for a great event.

During qualifying for Expert Truggy, Tessmann won all three of his heats setting him up with the TQ. In Expert Buggy, Tessmann won two of the three and finished second in the third heat. Pro-Line team driver and current ROAR National Champion Ryan Cavalieri had the same qualifying results in buggy so it came down to the fastest time. Ty was 11 seconds faster than Ryan earning him the TQ.

With the unique race format, the A-Mains were set up as two 35 lap events. Points were awarded for each main and the driver with the most combined points would be the overall winner.

In the first Truggy main, Ty Tessmann and Adam Drake would battle throughout. Drake, who qualified second, got off to a quick start by launching off the line. Drake took to the inside on the first corner, leaving Tessmann to follow. The two drivers battled back and forth on the very difficult track. At one stage, they both came in for fuel on the same lap, with Tessmann only a few feet ahead. They left pit lane in the same position and the battle continued until somewhere around lap 30, when a slight bobble from Drake would allow Tessmann to take the lead. Tessmann took full advantage, stretched out his lead and took the first main on Holeshot M3 tires.

In the second Truggy main, Tessmann and Drake would again battle throughout the race. Tessmann drove well from start to finish and was able to win the second main as well, giving him the overall Truggy win!

In the first Expert Nitro Buggy main, Tessmann took full advantage of his TQ by taking to the lead right away and never looking back. Tessmann dominated the race, pulled away from the pack, and finished with an impressive 17 second lead using M3 Blockade tires.

The second Expert Nitro Buggy main would be more difficult. Tessmann opted for the softer M4 Blockade tires and was challenged by Ryan Cavelieri, Josh Wheeler, Cody King and Taylor Petersen. All three kept close to Ty throughout the race, but were unable to take the lead. Tessmann would go on to win the second main, giving him the overall win in Expert Buggy, and sweeping both classes!