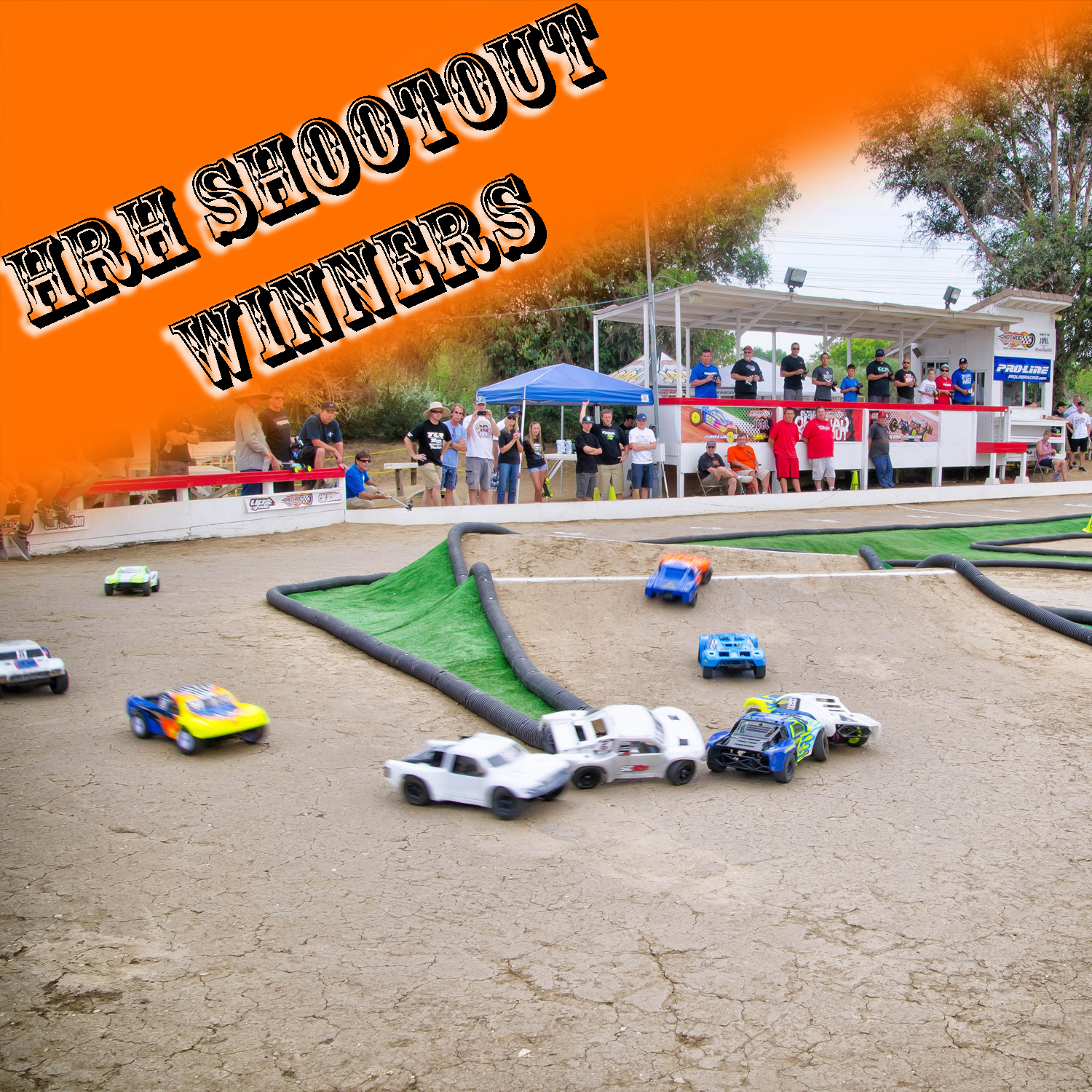 It was definitely a hot one at this year’s Hot Rod Hobbies Shootout; not just the above-average temperatures but the racing as well. The spectators that only came on Sunday to watch the mains definitely dodged a bullet as Saturday qualifying saw 100+ degree sweltering heat. With many of the world’s best drivers in attendance the racing was as fast as any given IFMAR Worlds, which made for intense racing action that was simply a joy to watch. At the start of the day the track saw a 15 degree drop in temperature, overcast skies, and a slightly lower grip level compared to the previous day, but the top pros found a way to go fast and were laying down some of the quickest laps of the weekend with the hardware on the line. 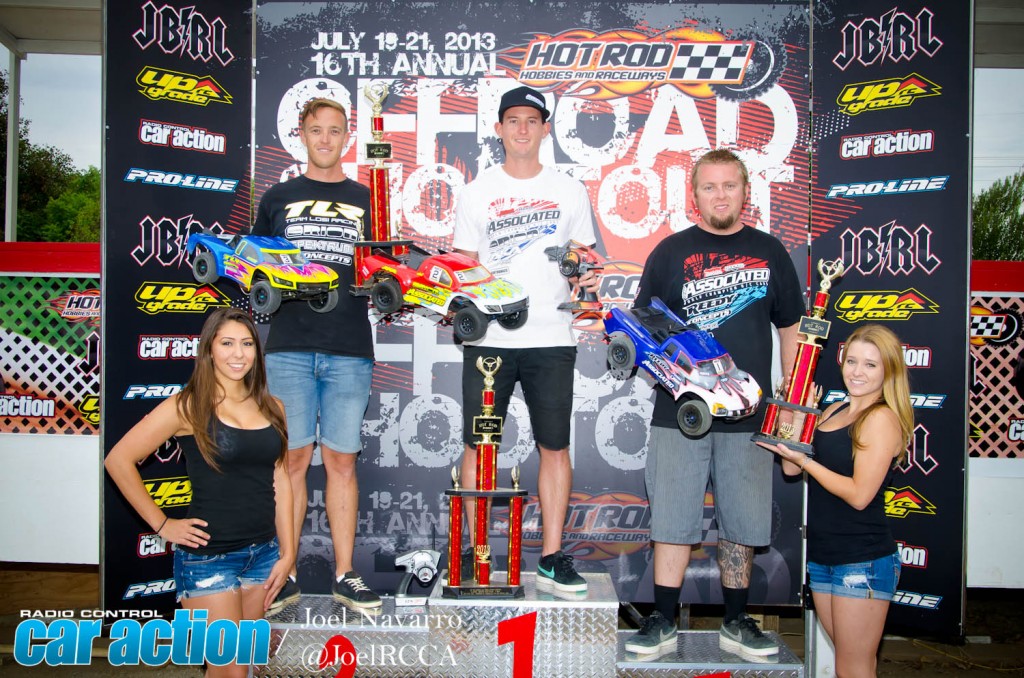 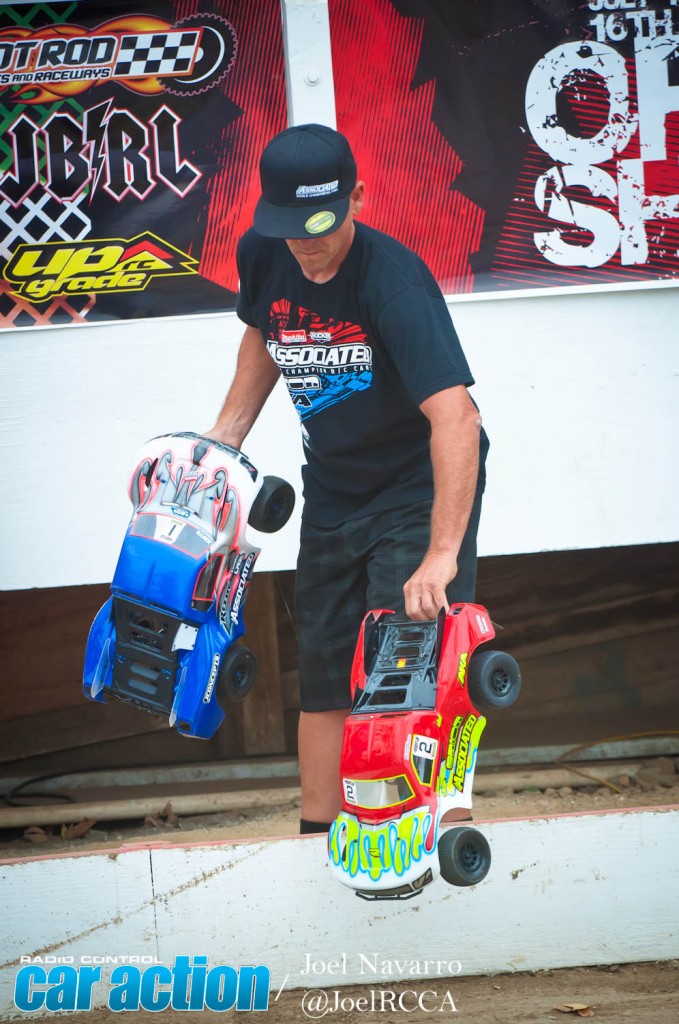 Louis Cavalieri is definitely the hardest working RC dad around. Here he is setting down his son’s car, which would eventually go on to take the overall win. 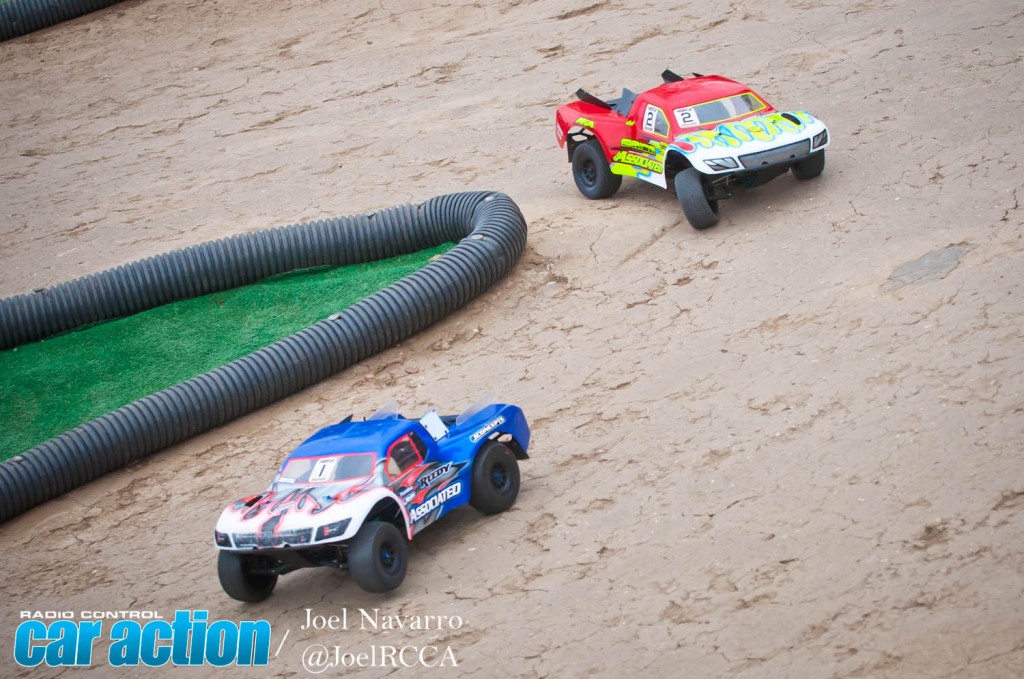 Both the Ryan’s claimed podium finishes; while Maifield is leading Cavalieri in this photo, he eventually lost the second spot on the podium to Dustin Evans.

A1
The Mod SC class was the first race of the long list of mains with TQ Ryan Maifield sitting on the pole with his Team Associated SC10.2. Luck wasn’t on Maifield’s side, however, as a few mistakes caused him to fall back a few positions halfway into the race and left him to play catch up. Meanwhile, teammate Ryan Cavalieri inherited the lead from the second spot on the grid and put a little distance between him and the rest of the pack to claim the win.

A2
The second leg started with the two AE teammates getting around the first turn with the TLR 22SCT of Dustin Evans following closely in tow. Evan’s truck was on rails allowed him to make an inside move on Maifield as he traction rolled on the sweeper after the straight. Maifield dropped to the third spot with Cavalieri taking over the lead position and Evans not far behind. As the field settled into the race, the gusty winds that had been going on all day spelled disaster for the lead battle as Cavalieri blew over on the back double-triple and Evans into the lead. Just as it looked like Evans was a shoe-in for the win, lapped traffic got in the way coming onto the straight with a slight bump causing Evans to catch the pipe and allowing Cavalieri to capitalize with a minute and a half to go. Cavalieri took the win to secure the overall, Maifield made his way back to second, and one last bobble dropped Evans to third.

A3
With Cavalieri sitting out the final main all eyes were on the battle for second overall between Maifield and Evans. Maifield drove hard from the sound of the tone and laid down some of the fastest laps of the race to build a cushion over Evans, but hit the pipe right before the back triple and let Evans slip by to take over the lead. With two minutes to go Evans suffered the same fate, catching the pipe in the sweeper after the straight and relinquishing the lead. It took just half a lap for disaster to strike again for Maifield, who flipped his truck on the double-double right before the straight leaving the door wide open for Evans. The final tone caught Maifield at the line just as it looked like they were going to battle it out for one more lap. Evans secured the overall second spot with Maifield in third. 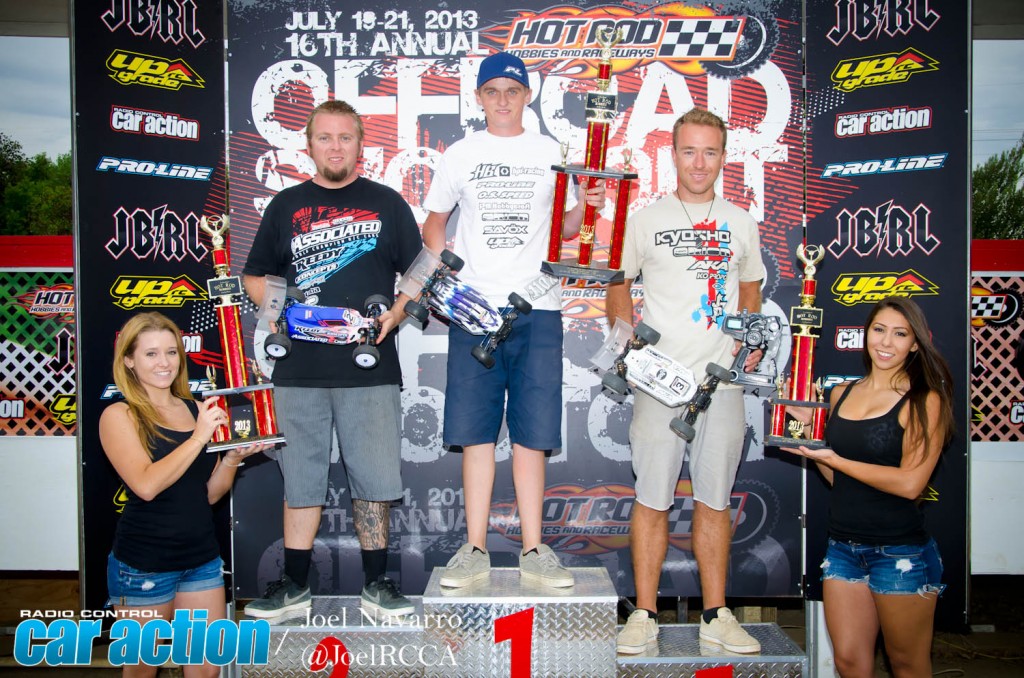 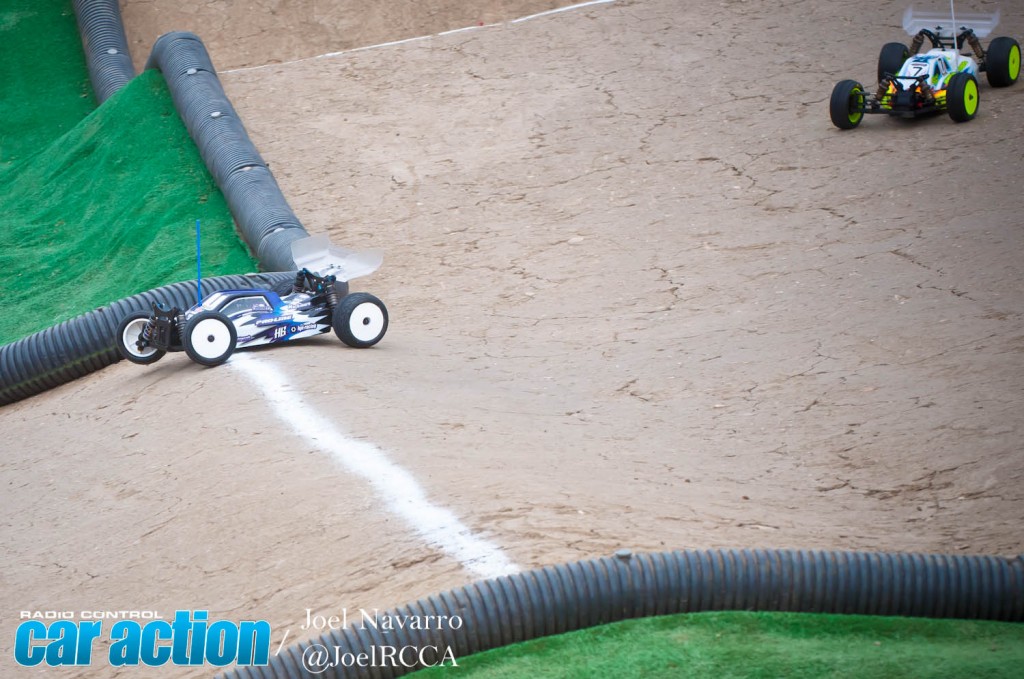 Hot Bodies‘ Ty Tessmann was amazingly fast behind the wheel of his Team Associated B44.2. 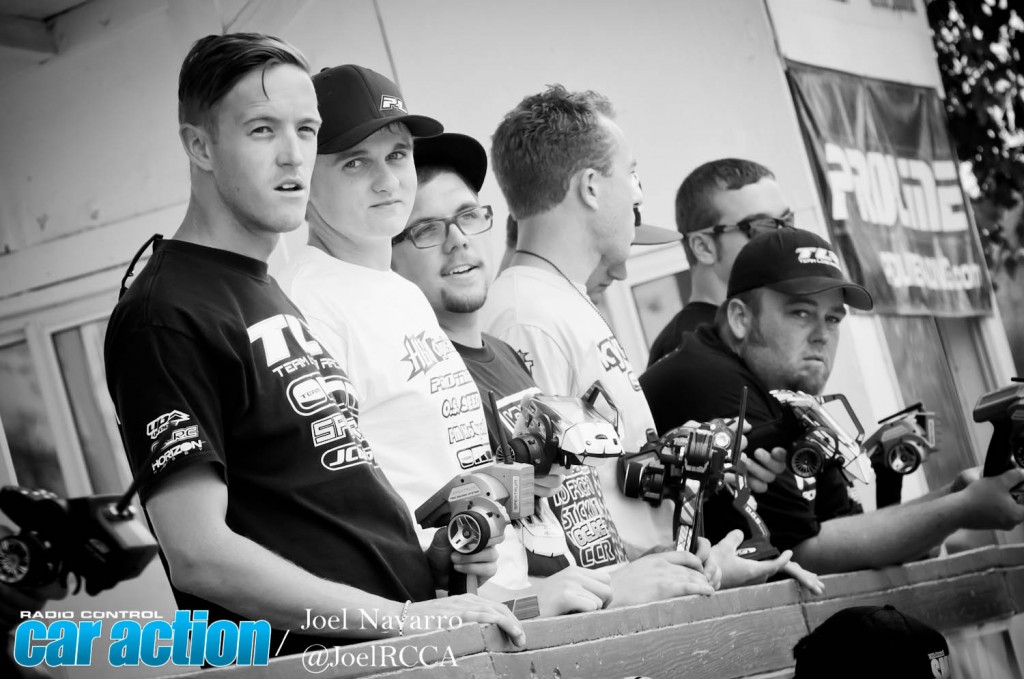 The calm before the storm. Ty Tessmann’s steady nerves scored him the overall 4wd Modified win.

A1
The 4wd Modified buggy class drew the spectators to the side of the track as it was the fastest class of the weekend. Hot Bodies’ Ty Tessmann, driving a Team Associated B44.2 FT (as Hot Bodies doesn’t currently offer a 1/10th 4wd buggy) was sitting on the pole position and looked unstoppable by laying down wicked fast lap times. It was a clean start to the race with everyone getting around the first turn in the same order in which they started. Tessmann might have been a bit overly excited and pushing too hard too early, as he caught the pipe after the back double-triple section and dropped two spots followed by another mistake that knocked him back to fifth in just one lap. Maifield gladly took over the lead and ahead of Kyosho’s Jared Tebo in the second position. Tessmann fought back and worked his way up to the third as the race wound down to its closing laps before making a spectacular inside pass on Jared Tebo to finish second behind Maifield.

A2
As the wind picked up in during the second race the field ran in order for the first couple minutes.  The top four distanced themselves from the field, with Tessmann nursing a 1.8 second lead on the battle for second between Tebo and Cavalieri.  Tebo drove hard, but just couldn’t close the gap on the hard-charging Tessman. The Ryan’s were another two seconds back from Tebo, fighting it out for the remaining podium spot swapping positions a couple of times. The finishing order was Tessmann with the win, Jared Tebo second and Ryan Cavalieri third.

A3
With a winner not yet crowned the championship was up for grabs to whoever wanted it the most. Tessmann quickly grabbed the holeshot at the starting tone and stretched out a lead over Maifield. Maifield tried to stay within striking distance of Tessmann, but the Canadian wasn’t giving up any ground running tight lines to eliminate any passing opportunities. The two beat the finishing tone and got around for one last lap; Maifield did everything he could short of attempting an aerial pass, but just could not pull off the win. The finishing order was Ty Tessmann taking the overall win, Ryan Maifield second and Ryan Cavalieri third. 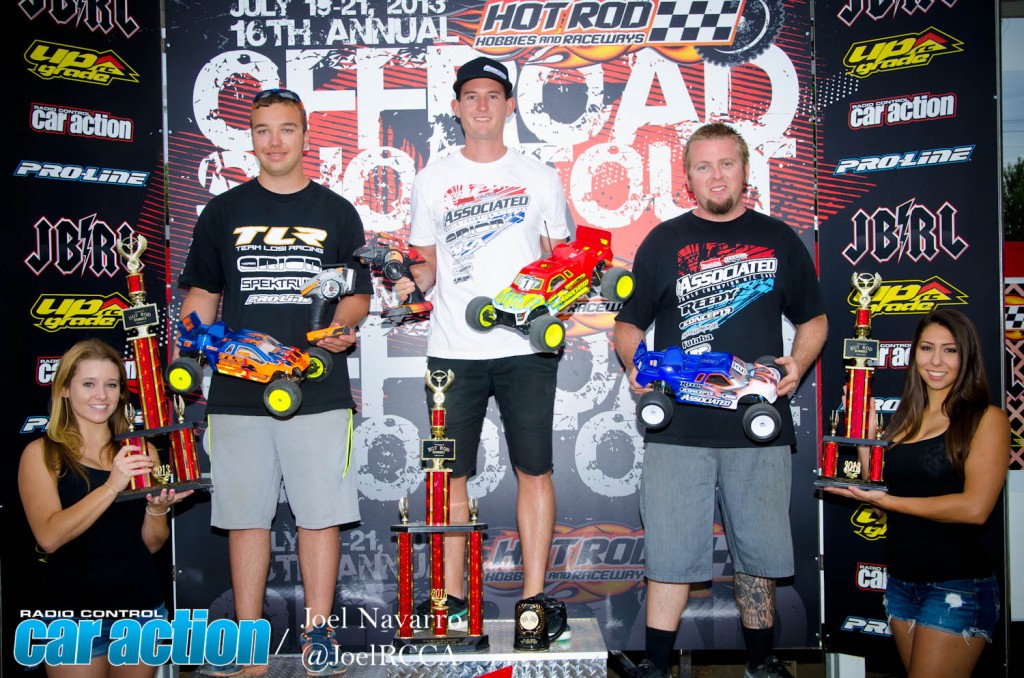 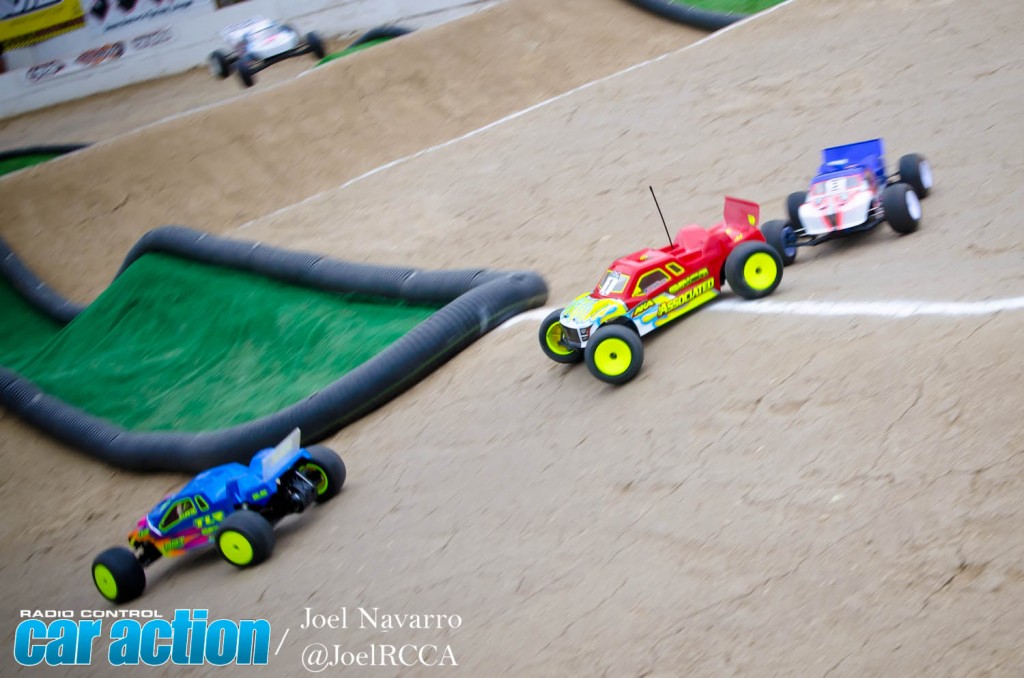 Evans, Cavalieri, and Maifield following in each other in perfect form. 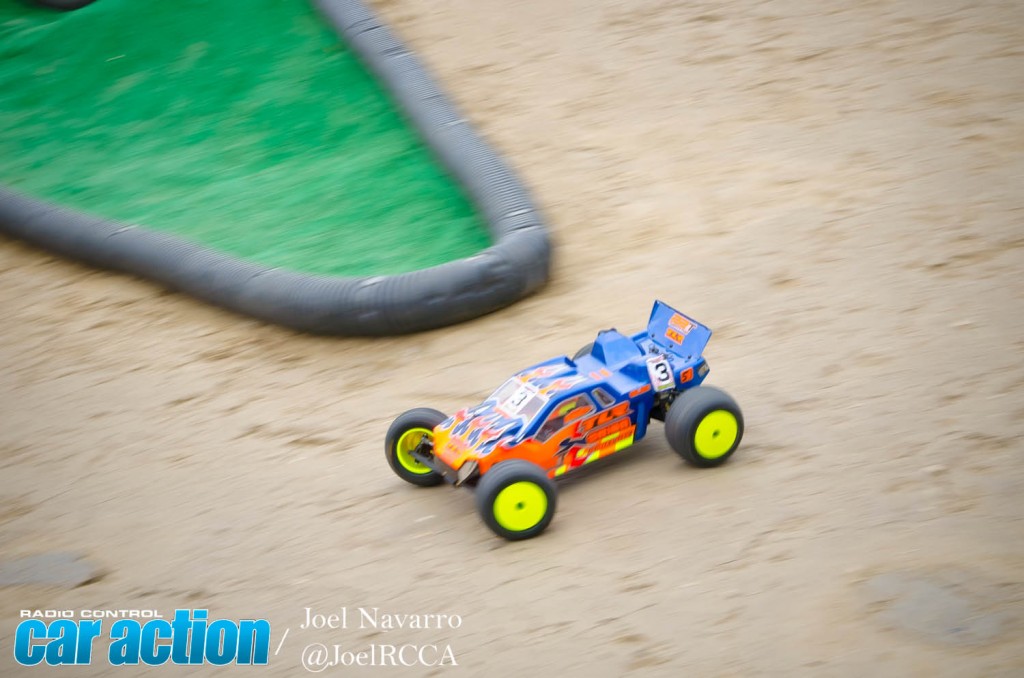 TLR‘s Dakotah Phend claimed the overall runner-up spot in Modified truck in spectacular fashion with a win and a second place finish.

A1
The two top qualifying spots in the Modified Truck class were occupied by Team Associated teammates Maifield and Cavalieri piloting their T4.2’s ahead of TLR youngster Dakota Phend driving the 22T. The order stayed the same for the first minute of the main as everyone felt each other out. Cavalieri made a small bobble about a minute into the race and let Maifield slip by and fell into the clutches of Dakotah Phend. Phend was quick to challenge and pulled off a bold pass right on Cavalieri right before the double-double. With his sights now set on the lead Phend was all over the bumper of Maifield waiting for a mistake. Instead, it was Phend who made the mistake on the double-double that dropped him all the way back to the fifth position. At the final tone, the finishing order was Maifield taking the A1 win, Cavalieri second, and Kyosho’s Jared Tebo rounding out the top three.

A2
The sun poked through at the start of the second leg, warming up the track much to the racers’ delight. The top three ran in starting order nearly all race long, until Maifield caught the pipe after the straight and dropped back behind Phend and Tebo. Phend pulled a slight gap over Tebo, but a bobble erased the advantage and brought the pack close together for a five-way battle for the second spot with just thirty seconds to go. There was a glimmer of hope for Tebo as both he and Phend beat the finishing tone to make it around for one last lap, but Phend held on for second with Tebo settling for the third spot. Ryan Cavalieri claimed the A2 win.

A3
While out front in the decisive third main, Cavalieri wheelied on the sticky track and bobbled, giving up the top spot to teammate Maifield. Team Associated fans cringed at the 3:30 mark, as Maifield and Cavalieri tangled long enough for Phend to get by and stretch out a lead. Phend kept a steady 2.5-second gap between him and the Ryan’s until the end of the race to claim the win. The overall victory came down to a tie breaker, which is the fastest combined time according to ROAR rules, as Phend and Cavalieri both had first and second place finishes. Cavalieri won the tiebreaker and the overall, leaving Phend in second and Maifield in third. 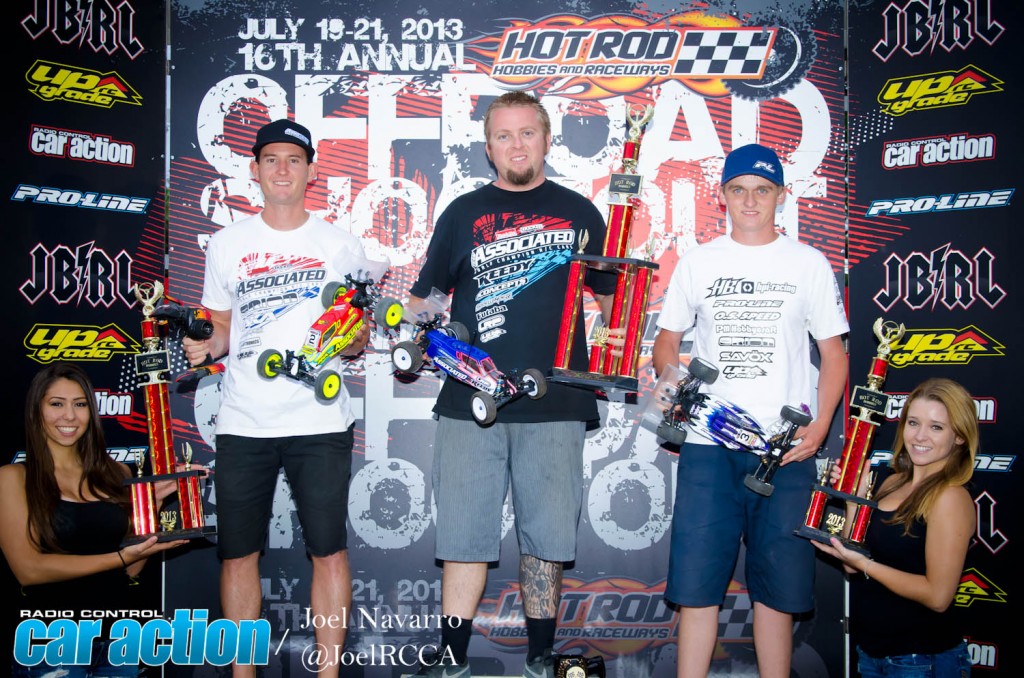 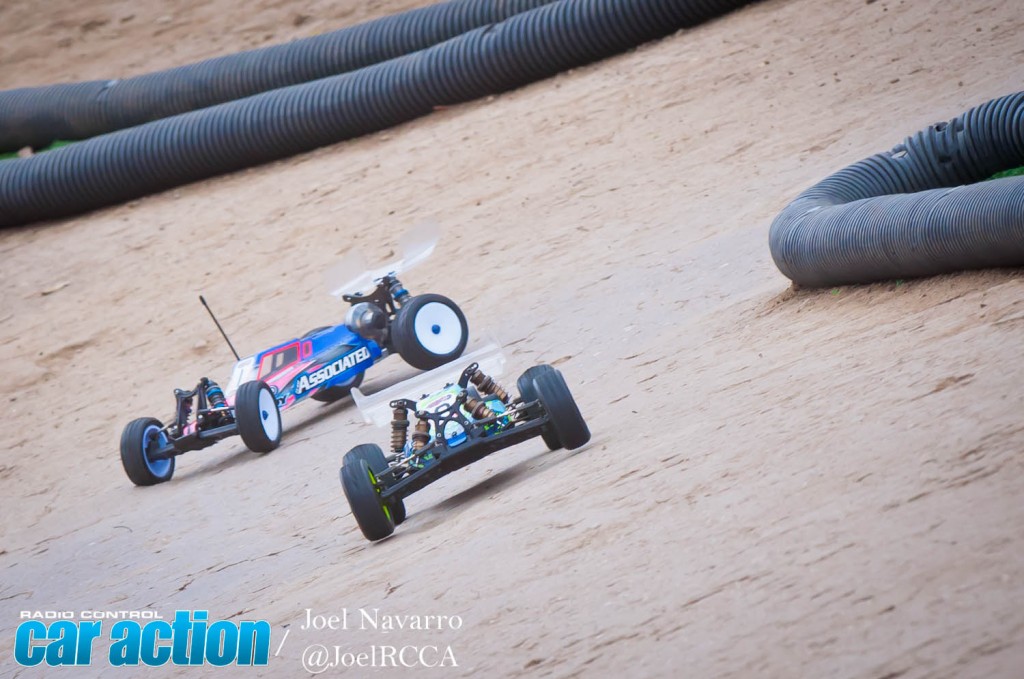 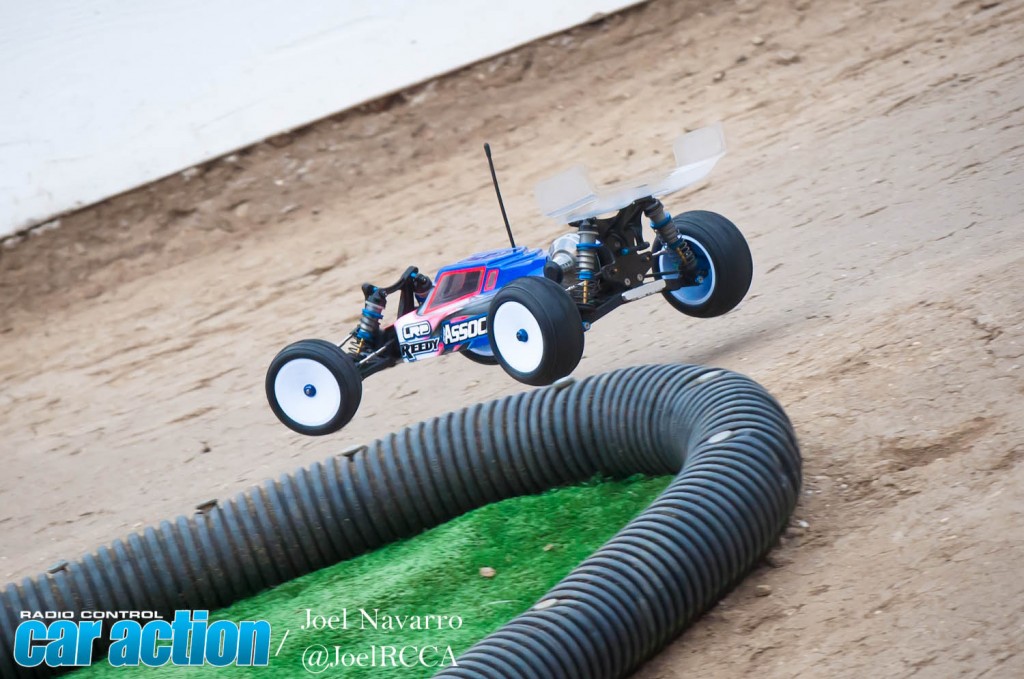 Maifield’s mid-motor B4.2 was untouchable during the finals.

A1
Team Associated enjoyed the advantage in 2WD Modified Buggy with drivers starting 1-2-3 on the grid. At the start tone, everyone got around the first turn without out incident. Kyosho’s Jared Tebo didn’t waste any time making moves as he passed Ty Tessmann in the turn before the double-triple section. Both Tebo and Ryan Cavalieri pushed a little too hard on the double-double before the straight, making contact and tumbling out of the way of Ty Tessmann, allowing him into the lead. Tessmann suffered a couple of bobbles, handing Maifield a comfortable 2.6-second lead that would hold until the end of the race. The finishing order was Maifield winning A1, Tessmann 2nd and Jared Tebo in 3rd.

A2
Everything started strong for the top three qualifiers at the beginning of the A2 final with one of the cleanest starts of the weekend. What seemed simple didn’t turn out so simple for Ty Tessmann as he cased the double-double right before the straight causing him to flip on his lid. By the time the turn marshal got to him Tessmann had dropped all the way back to seventh from the third spot. Jared Tebo had worked his way into the 3rd position driving his mid-motor Kyosho RB6, but a couple of bobbles kept him out of the battle for the lead and he eventually gave up the spot to TLR’s Dustin Evans. Maifield held onto a two second lead over Cavalieri, who kept Evans at bay on the last lap of the race. A second consecutive win earned Maifield the overall, with Cavalieri and Evans finishing second and third.

A3
Cavalieri led the first couple of corners in the final battle for second overall and it was Jared Tebo who proved not to be immune from the pressure of the quick pace as he clipped the pipe coming onto the straight, which let Dakotah Phend by. The battle heated up out front between Cavalieri, who maintained the lead, and Tessmann following in a close second. The two ran consecutive mistake-free laps while working their way through traffic, all while Dakotah Phend waited in the shadows for the two to make a mistake. Phend finally got his break when Tessmann caught a taste of the pipe after the back double-triple, and that’s how the class, and the weekend, finished.

Congratulations to all of the winners, and Hot Rod Hobbies for the sixteenth successful running of one of SoCal’s hottest races!