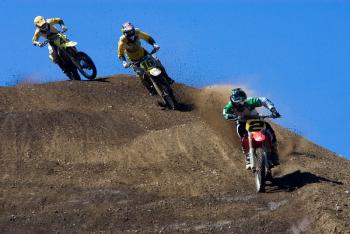 Team Associated is proud to be named the Official RC Car of the 2011 Monster Energy Mammoth Motocross for the second year in a row.

The annual Mammoth Motorcross has been a long held tradition in the Southern California motocross racing scene for pros, amateurs and novices of all ages. Set in some of the most beautiful country the world has to offer, Mammoth Motocross is more than just another race but a vacation destination focused on fun for everyone.

If you are planning to attend the Mammoth Motocross be sure to stop by Team Associated’s booth to say ‘hi’ and check out all the latest products that we’ll have on display.

Mammoth Motocross: Granddaddy of Them All

Back in 1968 Don Rake and some friends decided to put on a motocross in Mammoth Lakes, California. They built a world-class track 8,000 feet up in the Sierra Nevada Mountain range. Dave McCoy came along and offered the backing of his Mammoth Mountain Ski Area and the rest is history.

Every summer racers have flocked to Mammoth Mountain for this classic event. It is the oldest continuous running motocross in the USA. The track has changed a little over the years, but the fun hasn’t.

Many of the top racers in the world have honed their skills at this event. There have been some epic battles over the years and many racers have made a name for themselves on this track. Riders like Ricky Carmichael, Jeremy McGrath, Rick Johnson, Johnny O’Mara, Broc Glover, Donny Schmitt, Steve Lamson, Gary Jones, Kevin Windham, David Bailey, Jeff Ward, Ron Lechien, Bob Hannah, James Stewart, Mike Bell, Donny Hansen and many more. It also become one of the major amateur events in the country as well. You can see the factory riders of tomorrow racing in the mini classes at Mammoth today.