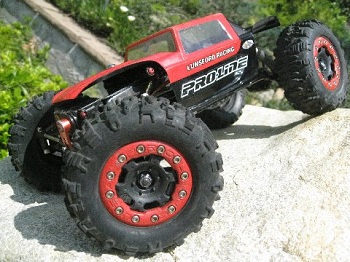 After finishing 3rd in the SoCal club series, Pro-Line team driver Don Hughes advanced his way into one of only 10 regional invite spots consisting of 3 Southern California Rock Crawling Chapters. Don took his Pro-Line equipped 1.9 Crawler out this past Saturday to “Donkey Kong” in Moreno Valley and took top honors which advanced him into the National Championships, scheduled to be held later this summer in Las Vegas, NV.

The competition was stiff and after two courses only one point separated first and 2nd place. The 3rd and final course would determine the winner. Don’s 1.9” Chisels, 1.9” Titus wheels and Rockstar body would prevail on the 3rd course. “The course was the most difficult of the day,” said Don. “Gate 7 was the toughest gate of the day and this is where I was able to capitalize and take the lead. I advanced through gate 7 cleanly and had finished run through the rest of the course. It’s my first big win in 1.9 and I can’t thank Pro-Line enough for all their support. I’m also proud to say that I was running a Reedy motor and with Mike’s recent passing I’d like to dedicate this win to him.”