by Kevin Hetmanski
If you use the term “scale truck,” most people will automatically think about vehicles like the Traxxas TRX-4, Axial SCX10, or Vaterra Ascender. But long before the Axial and Vaterra brands even existed, Tamiya was the king of scale trucks back in the ’80s. Tamiya has a long history of super-scale, metal-fortified off-road machines, and the monster-sized Bruiser gets the brightest spotlight—but it wasn’t the first in Tamiya’s family of solid-axle terrain tamers. Here’s a look at the early models that helped put Tamiya on the map as a maker of trick trucks with true-scale features and that paved the way for the scale trucks that we have today.

Toyota 4X4
Tamiya released the Toyota 4X4 in 1981, and it was the first to get a 3-speed transmission. The truck featured a body similar to the Bruiser, but this one had a step side bed. Power came by way of a 540 stock motor, and it drove a complex 3-speed transmission that with 2WD high, 2WD low, and 4WD low. Like older full-size trucks, the front hubs could be locked and unlocked with a simple pull and twist of the center hub in the front wheel. This truck used tires and rims that were designed to look similar to tires that were used on full-size trucks. The chassis was similar to the Bruiser but made out of aluminum, and the radio gear and battery were mounted in and protected by a large transparent plastic box. 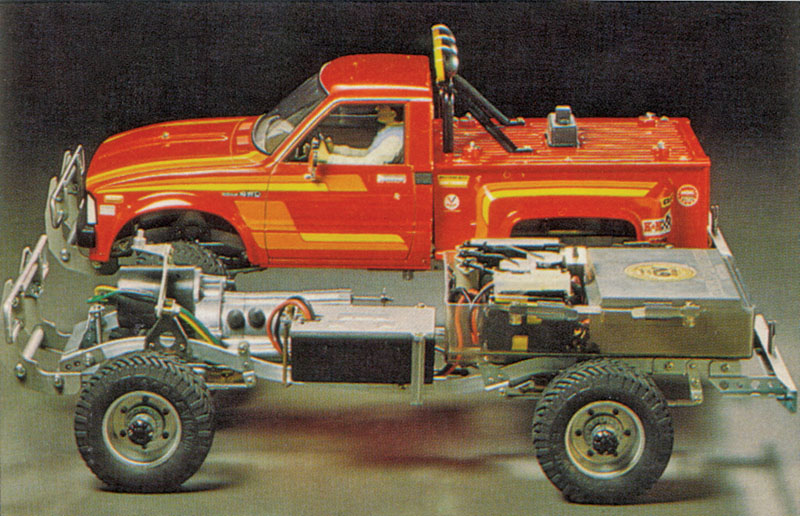 Bruiser
The Bruiser was released in August 1985 and shared the axles and transmission from the Toyota 4X4 and Blazing Blazer. For the body, Tamiya went with the 4X4’s Toyota Hilux but gave it a new rear half and cap in the bed. New items on this truck were a stamped C-channel chassis, large molded radio box, taller tires, new wheels, and a big 750-size motor. The Bruiser graced the cover of the very first issue of RC Car Action magazine. Its metal ladder-frame chassis, leaf-spring suspension, and super-scale body were unlike anything available at the time. 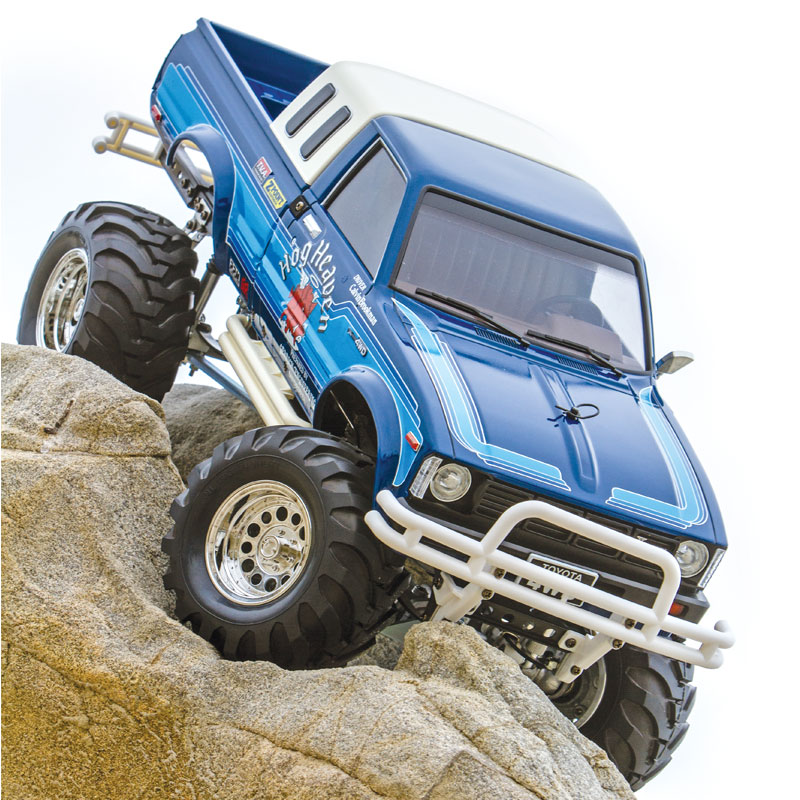 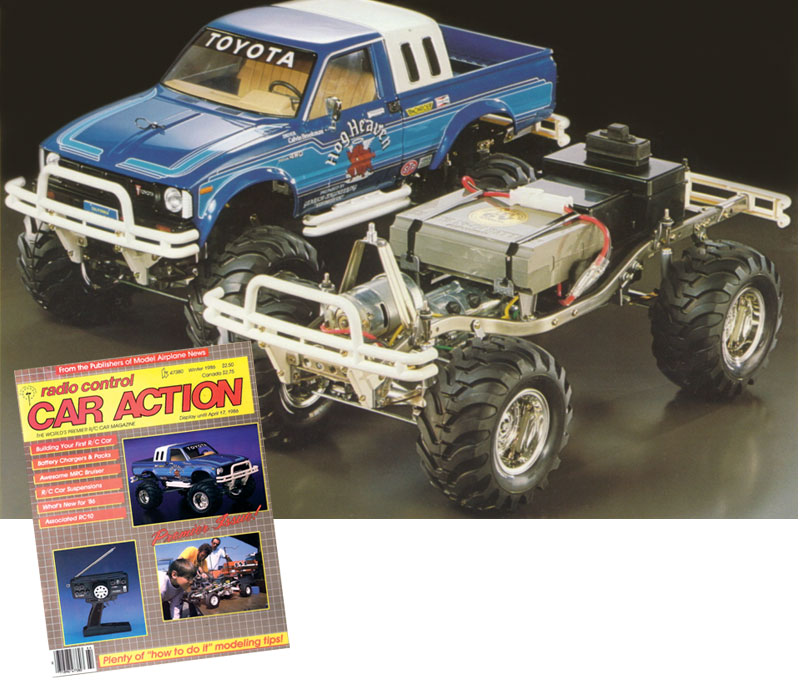 Blazing Blazer
The Blazing Blazer was released in June 1982 and was basically the same as the Toyota 4X4. The differences here were in the body and tires. This truck was designed to look like trucks that ran in the early days of the Baja 1000. The body was a modified Chevy Blazer, and sand paddle tires provided grip. 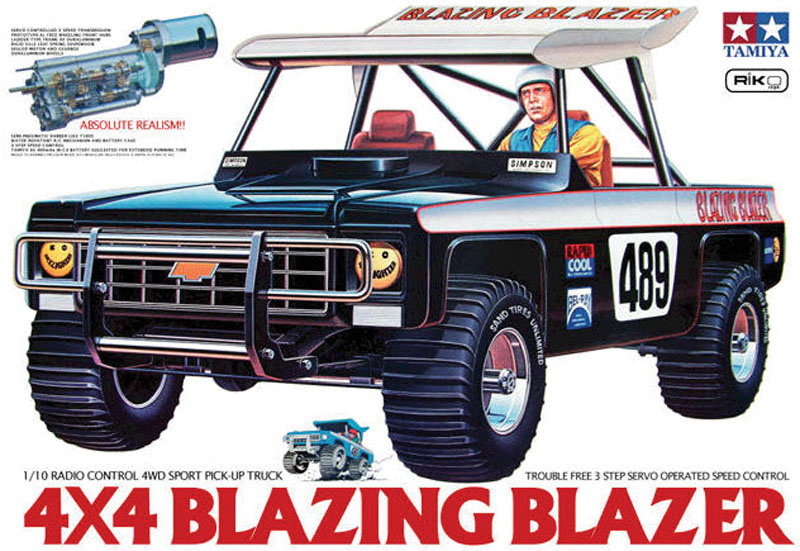 Mountaineer
September 1992 saw the release of the Mountaineer. This truck was basically a carbon copy of the Bruiser with a trim-scheme change and a roll bar with lights instead of a cap in the bed. 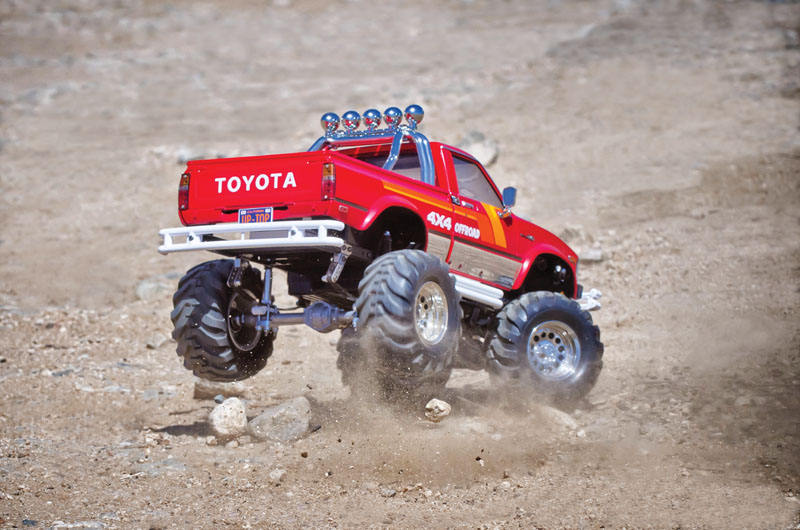 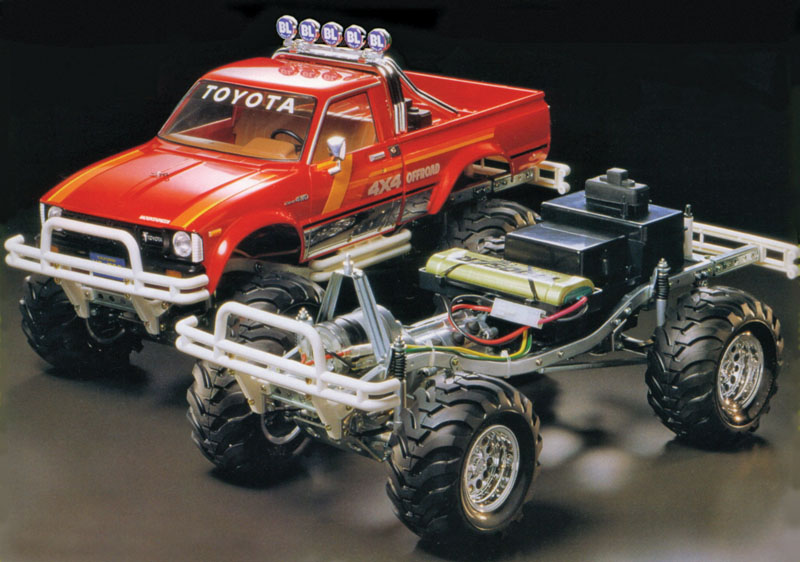 Tamiya Today: The High Lift
In addition to the rerelease version of its classic scale trucks, Tamiya offers its latest take on a scale solid-axle platform: the High Lift. Currently offered as a Toyota Tundra, Toyota HiLux, and Ford F-350, all the High Lift models have ultra-detailed “hard” bodies, steel ladder-frame chassis, and shift-on-the-fly 3-speed transmissions. The HiLux even includes a surfboard. Gotta have the surfboard. 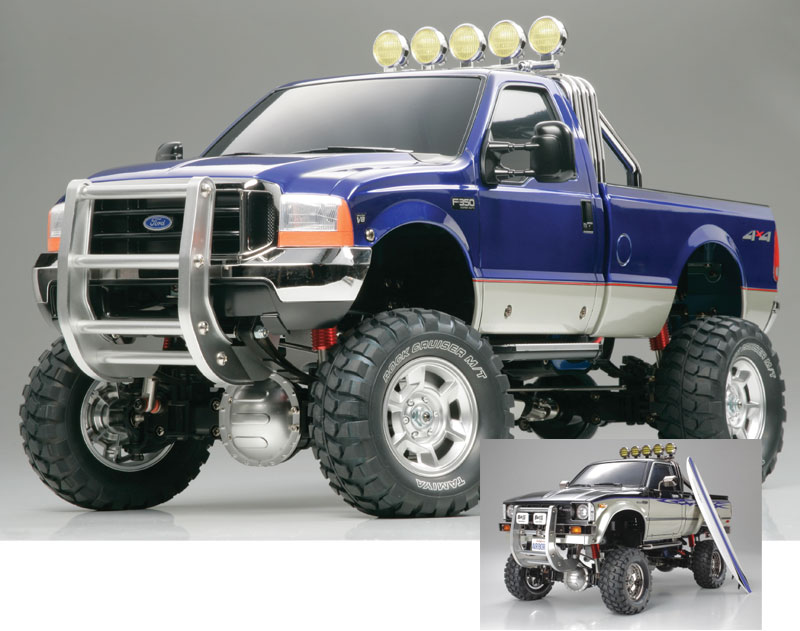