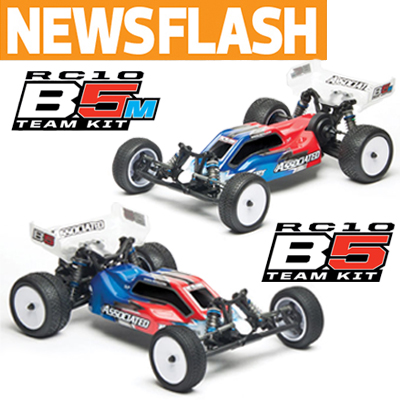 While rumors have swirled on the internet for the last 2 months with everything from printing errors in vehicle manuals, spy shots from across tracks, here say and teasers, Team Associated stunned the world on Christmas morning releasing first photos and more details about the long awaited and brand new B5 buggy platform. After nearly eleven years, three major refinements that produced a total seven versions, 10 ROAR National and 5 IFMAR World Championships and endless wins on the local level, the B4 2WD buggy is finally being retired in place of an all new buggy available in two separate configurations. The new B5 2WD buggy will be sold either as a rear motor configured B5 or mid-motored B5M version to give you, the racer an uncompromising design for total track domination. With the first images being released of this pair of hot new buggies we can finally get a glimpse at what could possibly put Team Associated back on top of the podium. Let’s take a closer look!

The B5 Team Kit features a more classic design with a rear motor setup that speculation says will have a new transmission. Our guess is that the tranny will maintain the same 2.6 final ratio and based on the shape of the gear cover, it appears to feature Team Associated’s VTS Slipper Clutch. While we await further details on the new chassis, the new Pro-Line Racing body appears to be narrower that previous B4.2 bodies with a raised section toward the rear shock tower that could possibly house a speed control mount. On the suspension side of things, Associated’s 12mm Big Bore shocks provide damping to a similar geometry  with refined shock tower designs that provide better clearance for the shocks and greater strength and rigidity. All new suspension arms appear to be thicker and feature rounded edges to save weight. Up front a set of straight arms are connected to all new front caster blocks that appear to be substantially larger, more solid and most importantly feature lower mounts that hang low beneath the arm to drop the roll center as low as possible. Brand new oversized steering blocks look to have a more rounded design and house the front wheel bearing to accept hex axles and wheels. Overall the outer steering assembly is so large that it fills the majority of the front wheel and has a more rounded and refined design that looks solid. The front shock tower looks specific to the B5 rear motor car and moves the upper shock mounts closer together with more traditional style braces inside the tower. Out back the photos shown don’t reveal a lot but what we can see is that the rear will maintain the vertically mounted inner camber links except now they appear to be mounted to a more solid piece of the chassis. The rear tower looks very similar to the B4’s piece but appears to be thicker with revised bracing and all new and wider wing mount positions. The car shown has an all new body and wing that Associated is making themselves but is also shown with JConcepts Bar Code tires all around. Only time will tell if tires will be included (the B4.2 did not include tires either). 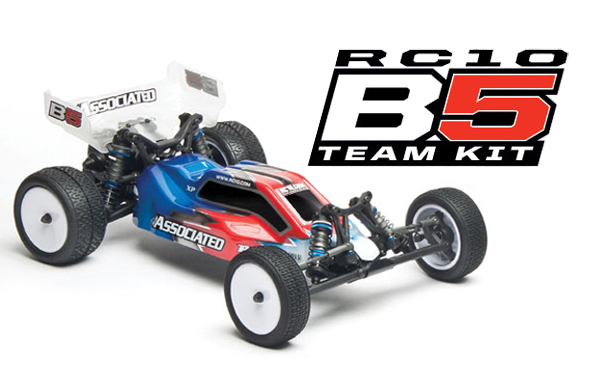 The B5M adds a new and exciting idea to the world of off-road racing, a mid-motor specific design. Rather than creating a design that compromised on performance to provide one platform that could be configured as either rear or mid-motor, Team Associated has come up with two separate vehicles with different geometry and balance tuned specifically to their specific motor configuration. The B5M Team Kit’s biggest feature is it’s mid-motor setup that puts the motor’s weight closer to the longitudinal center of the chassis for a more neutral weight distribution. with the motor moved forward of the rear suspension, the B5M is built for high traction surfaces. At first glance the new buggy looks to share a lot of its design cues from the Centro C4.2 conversion kit which makes us wonder if both new cars will follow the conventional modern buggy design and feature aluminum chassis plates. While the B5M may generally look like the C4.2, looks are where the new car steps away from anything that came before it. The front suspension utilizes the same caster blocks and steering knuckles from its rear-motor twin brother except that on this version they’re attached to a set of gull-wing style arms that lower the suspension’s center of gravity. A revised front shock tower appears to step the upper mounts out a bit in comparison to the rear-motor car, most likely to increase initial steering response. A close look beyond that gear cover lends the thought that there is in fact a new transmission with new mounts to provide added support to the rear shock tower which is held in place with a rear mounted bulkhead. The photo of the mid-motor car also shows a slightly better look at the suspension mounting points both front and rear and from the looks of it, Team Associated has stayed with the screw captured hinge pin design on their previous buggy rather than gone with a centrally located set screw style for pin retainment. The wing mounts appear to carry over from the rear car but a new tower looks narrower overall with wider upper mounts like the front geometry. Our first thoughts as far as electronics configuration is whether the speed control will be mounted in front of or behind the battery and what type of packs the B5 platform as a whole will be able to handle. With revised ROAR rules that require cars to be able to hold stick, shortie and saddle packs, anything is possible; perhaps even Reedy’s new square packs. We can’t wait to see this car with the body off! 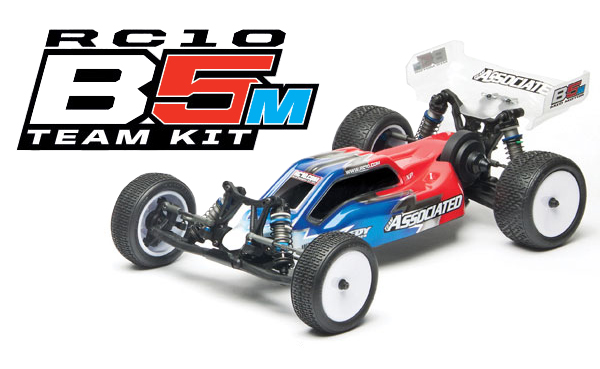 Team Associated’s sneak peek at the B5 and B5M buggies are very exciting and while they answer a lot of questions racers around the world had, there still remains a lot to be seen. The press release posted on their site has some interesting wording that lends itself to fueling the rumor mill fire but we’ll have to wait for more details. At the rate they’ve been posting on their site, we expect to have more very soon and with the quickly approaching racing season kicking off in just a couple weeks with the Reedy Race of Champions and the Cactus Classic, we’re sure we’ll have a lot more to talk about very soon. Stay tuned as we work to bring you all the details on the new B5 and B5M before anyone else! 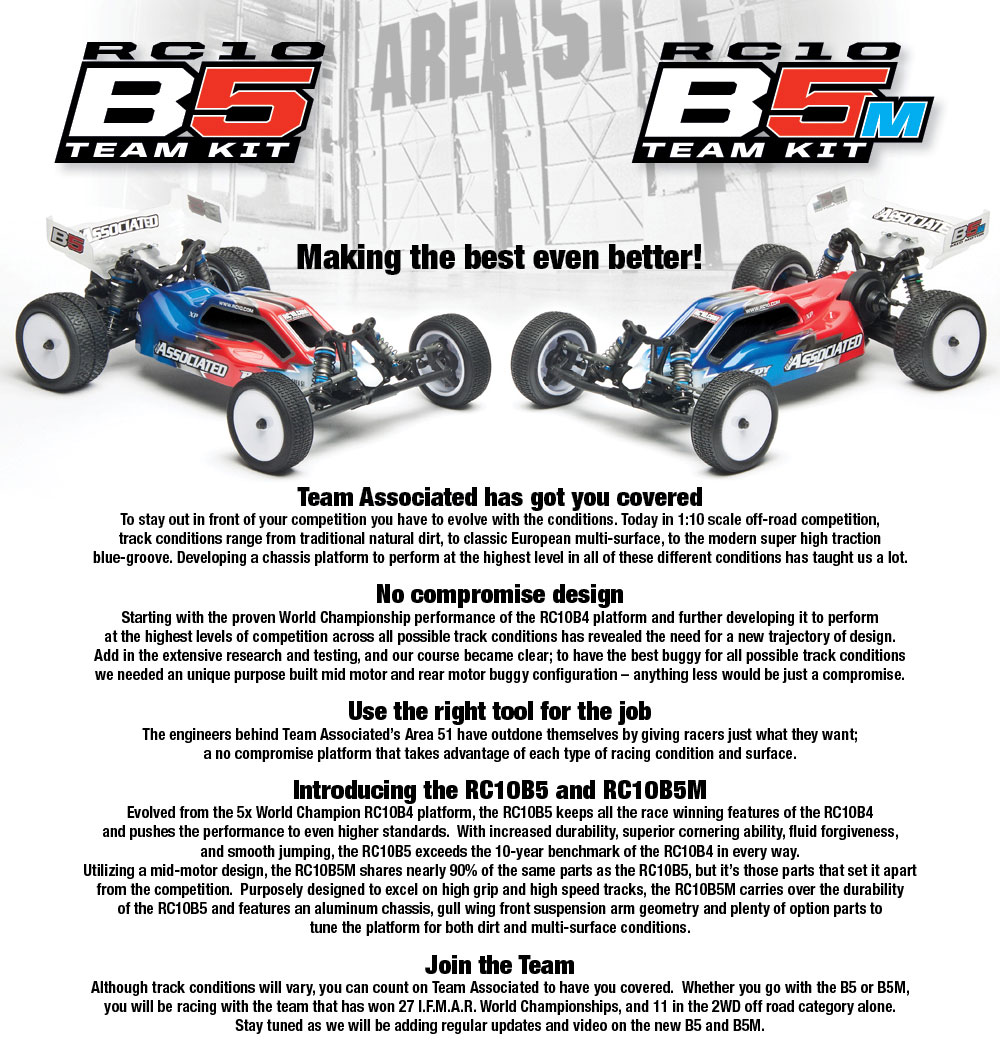