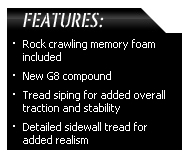 The tire has been designed for complete terrain diversity while maintaining a true rock crawling look. The large lug pattern combined with siping allows the tire to have the perfect amount of flex under throttle acceleration. In fact, in our testing, the Flat Iron’s response to throttle acceleration was unmatched.

Pro-Line is proud to announce the Flat Iron tire in 1.9” and in Pro-Line’s proprietary all-new compound called G8. It’s especially formulated to give your rig the ultimate in crawling capability on any surface you throw at it. “I actually made lines that I could never make with other tires,” says Brandon Coonce, NorCal crawler extraordinaire, while testing the new G8 compound in the 2.2” Hammer tire. He continues by saying “I’m able to make the same climbs with less momentum. This makes my rig much more predictable.”

Others are saying the same thing about Pro-Line’s new G8 compound. Mike and Dale Johnson out of SoCal reported that not only that the compound is unbelievable but that they were able to run the same tires for over an hour without any signs of wear to the leading edge of the tread.
Get ready to experience Pro-Line’s new 1.9” Flat Iron tire in G8 compound for your scaler or mini crawler.