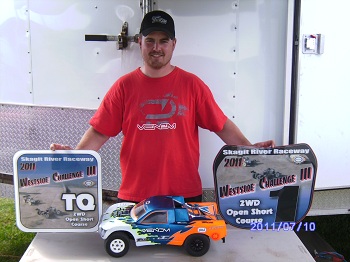 Congratulations to Venom Factory Pilot Jesse Munn for taking both the TQ and the overall victory this past weekend at the Northwest Championship Tour round three in Burlington, WA. Jesse was running Venom LiPo battery packs and his Gambler SC truck and commented, “ The truck ran flawlessly and was really fast all weekend.” Throughout open SC qualifying, Jesse’s Venom Gambler was pulling faster laps than any other trucks in the field. The first A main, Jesse pushed his gambler to a win in a close battle. The second main was a different story when Jesse put in a dominating performance to clinch the overall victory. In a showing of true diversity, Jesse also took home 2nd place in his Venom powered 2wd Modified buggy.
[nggallery id=291]