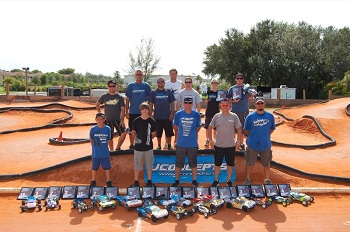 JConcepts was out in force at the 2011 ROAR region 4 championships hosted by the Coral Springs R/C club. For the 3rd year in a row, racers could not wait for the event. 175 entries lined up for this annual event which brought racers from all across Florida for a 2-day weekend event full of competition at one of Florida’s premier 1/10th off-road tracks.

Threatening weather was in the area on Saturday morning which spoiled an early start but the Coral Springs Club would not be denied. Hard-work and dedication provided by the club, fellow racers and the track surface was in race condition in just a few short hours.

JR Mitch took from the pole position and blasted out front showing his normal flare for the incredible at regional races. Paul Wynn made a more risky tire selection for the main and opted for Bar Codes in blue compound which gave him the speed to hang in second place and actually take hot lap during the main. With JR out front and cruising Paul and Ryan Eckert battled for 2nd and it was Wynn that took command and pulled a very close gap to the finish line. JR Mitch takes another regional title in first place, Paul Wynn second and Ryan Eckert 3rd. JR (1st), Paul (2nd), Josh Harris (4rd) and Zack Genova (5th)were all running on JConcepts Bar Codes in the main event. 3 of the 4 drivers also relied on the Punisher B4.1 body and 6.5” rear wing all weekend long.

4wd modified belonged to Zack Genova all weekend. After a semi-rough start Zack recovered into 2nd place and chased the leader Ryan Eckert. It wasn’t long before Zack re-took the lead which he held to the finish line. Crossing for his first regional 4wd modified championship, Zack Genova took a well deserved 1st place. Ryan Eckert finished in 2nd and Mike Barrone in 3rd. Zack’s B44.1 was outfitted with JConcepts all weekend including the popular front and rear Double Dees tire combination for the main events. Topping off the winning ride was a custom painted Kustom R/C Graphics Punisher body and 6.5” HD rear wing.

The 2wd modified SCT class was packed with competition and while TQ JR Mitch sat out front, nothing was safe in a single main format in Short Course. Once again it was JR Mitch taking a large lead in the early moments while a battle between Zack Genova, Paul Wynn and Ryan Eckert heated up. With JR out front and cruising Zack held a close battle with Paul Wynn and was able to distance himself into the 2nd position. JR Mitch took another well deserved win with Zack Genova 2nd and Paul Wynn and Ryan Eckert exchanged positions several times with Paul eventually finishing 3rd and Ryan Eckert 4th. The top 3 in short course ran JConcepts all weekend long including in the main event where everyone relied on the popular Double Dees tire in green compound for the grooved surface mounted on Rulux 12mm hex wheels. The JC Raptor SVT body was the popular finishing touch for the 1st and 4th place trucks while the Truth V2 body was the choice for the 2nd and 3rd place trucks.

Modified truck was another barn burner with 4 drivers all in contention vying for the elusive title of regional champion. TQ Leon McIntosh looked comfortable but young and confident Zack Genova had no fear and made it a wheel to wheel race with McIntosh. A few mistakes by both drivers allowed several drivers into the fray including Jader Lopez and Dave Duncan who each shared a moment in the top 3 and in Jader’s chase the lead position. Genova was strong in this one and his T4.1 was very tough to beat in the high traction main event and eventually put his stamp on the main by crossing the finishing line in 1st place with Leon McIntosh 2nd and Jader Lopez 3rd. Zack’s truck was outfitted with JConcepts Double Dees in green compound, Hi-Flow T4.1 body and Rulux wheels.

Pro 2 stock was competitive all weekend and TQ Daimon Borkowicz sat out front and looked to take his first regional title with his SC10 Factory Team. Billy Bruce had other ideas and took advantage of a well prepared and great working truck, took the lead and drove conservative and consistent all race. Daimon faced a little adversity early in the main and never completely recovered but showed his speed as he got back into 2nd place. Andre Saunders rounded out the top 3 with a 3rd place finish. Billy Bruce and Daimon Borkowicz ran the JConcepts Double Dees mounted on Rulux wheels for the main event topped off with Ford Raptor SVT body.

Stock truck was the Mike Applegate show from start to finish. Mike’s T4.1 truck was on point during the main and he was on a mission throughout to take the regional title. Jake Salvati was consistent all main long and took 2nd place and Bill Davis in 3rd. Double Dees and Carvers were the winners choice for front and rear tire combination along with Punisher T4.1 body and Rulux wheels.

Stock buggy was TQ’ed by none other than Daimon Borkowicz who also held his 11th birthday party on the same weekend. Daimon grabbed an early lead with his B4.1 buggy but over-rotated in the first turn which allowed several cars to get by him on the outside setting up serious competition for the stock buggy title. Jason Veniza quickly made his way to the front and allowed everyone else in the back of the pack to battle for position while he stretched it. Mike Applegate, locked into the 2nd position and TQ Daimon Borkowicz settled for 3rd. Jason took a small risk and it paid off with running the Bar Codes V2 in green compound along with the Rips front tire. The conditions were perfect for that combination and Jason’s buggy was on rails.

What can be said about the Coral Spring club and facility that hasn’t already been said, it’s simply a class act with hard-working dedicated members. Congratulations to Mike Applegate, Tim Moon and the entire Coral Springs club on another perfectly ran regional event.