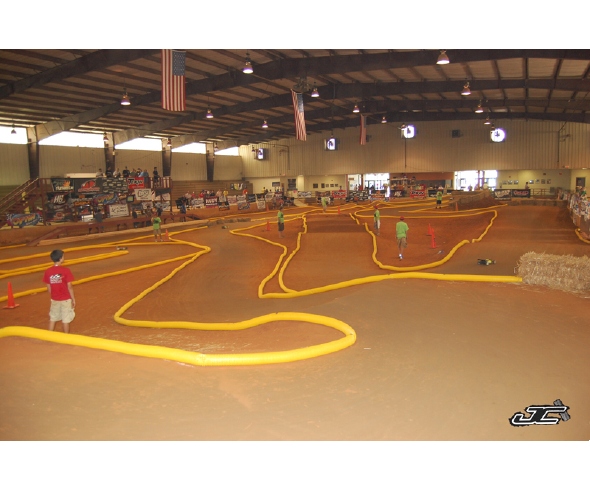 JConcepts driver Ryan Maifield was on a mission at the 1st Annual Manufacturers Shootout in Cullman, Alabama. Traveling all the way from Arizona, the speedy driver with the radical driving style took his program to Cullman to put on a display of speed while also giving his expertise to a host of local and visiting drivers. With over 370 entries and a host of the nation’s top drivers on hand, the competition was close throughout the 3 rounds of qualifying.

Ryan’s RC8T-CE topped off with JConcepts accessories qualified 1st in the 1/8th truck class. Ryan utilized the Punisher body, Illuzion wing and JConcepts Sevens truck tire to dominate qualifying. In the 1/8th buggy class Ryan had to settle for the 3rd qualifying position while tuning for the A-main. Ryan’s RC8b was decked out with the brand new Punisher RC8b body, Illuzion wing and JConcepts Subcultures tire in the brand new sticky green compound.

The 1/8th truck A-main got off to a great start with Ryan leading out. During the first pit stop an unfortunate problem sidelined Ryan for almost 2 laps. Without a flinch Ryan put his RC8T truck into top gear laying down the fastest 20 laps in the A-main while completely catching the lead group. With only laps to go Ryan was within striking distance but the consistent driving from the leader was enough to hold onto the lead for good. Settling for 2nd, a host of fans and fellow racers followed the fastest truck in the A-main back into the pits to see the details. With one of the most memorable and hardest drives in recent memory, Ryan’s RC8T was one of the few trucks remaining in the A-main with tread left on the tires. Sevens were a great choice for the 40 minute A-main.

The 1/8th buggy class was a little different, out for redemption, it didn’t take Ryan long to take the lead. With a fresh mindset and Green Compound Subcultures, the buggy was completed dialed and proved to be the difference. With precise driving and timely passing, Ryan moved into the lead on the first lap and proceeded to run away from the competition. Punishing the rest of the drivers, the lead began to grow considerably as control and caution set in around 25 minutes into the race. Letting the Punisher body breath, Ryan settled into a great rhythm and eventually lapped the entire A-main while the Subcultures tires went the complete distance with plenty of tread left over in the 40 minute A-main. Subcultures were a great choice for a combination of speed, longevity and performance.

When it comes to long lasting, high performance and competition inspired products, JConcepts is World Proven Innovation and Design.