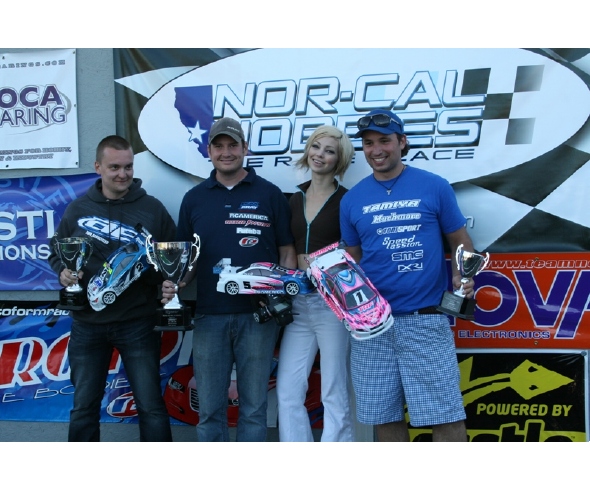 The invitational class at the 2010 Reedy Race of Champions featured ultra close competition. After 2 days of racing it all came down to one last race on Sunday evening with 4 racers capable of the overall victory, Mark Reinhard, Paul Lemieux, Victor Wilck and Juho Levanen. Paul Lemieux jumped out into the early lead. A few laps later Mark made the pass for the lead and started pulling out a sizable lead. There were comments that Paul should just “throw in the towel, the champ won’t make a mistake”, however a few minutes in Marc did make an uncharacteristic mistake clipping the inside of the corner while coming onto the straight, sending his Tamiya racer into the outside wall. Paul regained the lead, battled with Juho briefly, but then pulled away to take the win and the cup.

Tyler Vik was the “darkhorse racer” of the weekend. The local racer who is more noted for his off-road prowess was out to prove “he could do it all” and finished off the event with a surprise 4th place overall in the invitational class. Also worth noting is the fact that Paul Lemieux seems to have closed the performance gap that the pro European drivers have seemed to have when racing electric sedans on rubber tires. This might just be the first ever win at a major event win for an American driver in a rubber tire sedan event.

The 2010 Reedy Race lived up to its heritage as an extremely competitive event – enjoyed equally by the racers and the crowd that watched.