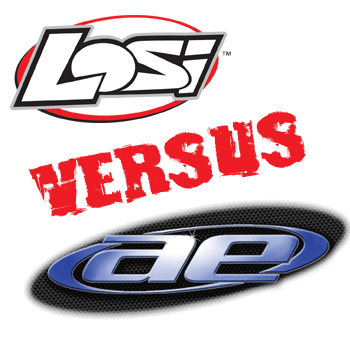 Simply put rivalries add excitement. But, they actually do far more than that. Think of the Red Sox vs. Yankees, or Giants vs. Dodgers for you west coasters. They take what is a game and turn it into a battle. In RC, the greatest and most heated rivalry of all time is Team Associated vs. Losi. During the nineties, these two companies and racing teams were so extremely competitive that it would seem they were each obsessed with beating the other. And, this rivalry went beyond the pro-level. At the local track, you were either an Associated guy or a Losi guy.  In that sense it was just like the classic Chevy vs. Ford. You ran one brand and only one brand. Club level racers rarely jumped ship and would argue the merits of their favorite for hours.

The Associated vs. Losi competition was at its peak when 1/10-scale electric off-road was also at its peak. As the hobby naturally changed and different trends such as touring cars have essentially come and gone, the once hot rivalry somewhat diminished.

It seemed like the good old days would return when these two iconic companies each finally introduced 1/8-scale buggies, but that market is far too crowded to foster a one-on-one. There are literally dozens of 1/8-scale buggies available.

4WD short course racing and an increase in the popularity of 1/10-scale electric off-road racing has, however, shown some real promise for the possible return of this once great rivalry. The all-new, and new from the ground up, Team Associated SC10 4×4 isn’t getting its wins easy. In fact, the Losi TEN-SCTE is proving to be plenty of competition. At the pro-level, a racer from either team better be on top of his game if he expects to win in this class. And there is also some stiff competition at the track from pros running vehicles such as the Durango. At the club level, there are a huge number of Traxxas Slash 4X4’s in the mix. In 1/10-scale electric off-road racing, we also seeing some increased competition from these two teams. Team Associated has what could be considered a stacked team with Ryan Cavalieri and Ryan Maifield, and the A-team has kept its 2WD buggy current and is heading to the upcoming IFMAR World Championship with a B4.1. On the racing side of things, Losi has re-launched itself as Team Losi Racing, or TLR, and unleashed the 22. The 22 isn’t just a buggy–it’s a statement. The statement is we’re committed to racing. With a new name, an all-new race machine and a firm stance on racing, the pressure is TLR to win. Going into the upcoming IFMAR World Championship guess who is most likely to be standing in their way? Team Associated, of course. Is RC’s greatest rivalry back? It sure looks like it.

What do you think? Are the gloves coming off once again? Are these two racing giants about to go at it?

Or, do you believe this is RC’s greatest rivalry?

If you enjoyed this story, you may also like this one on the demise of on-road racing.