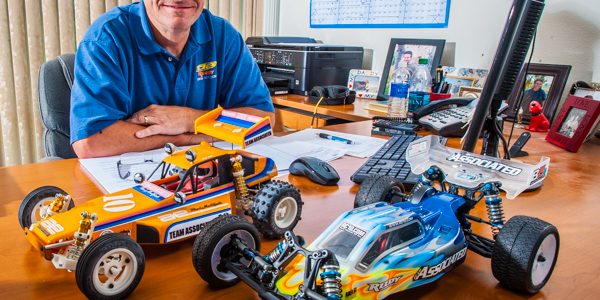 Team Associated President Cliff Lett has made a career in motorsports, both full-size and RC. Before joining Team Associated in 1988, Cliff worked in research and development with Team Yamaha. The skills he honed keeping the legendary Rick Johnson’s YZ250 on top of motocross podiums transferred directly to his work as product development manager for Team Associated. After joining the Team, Cliff helped refine the RC10 and develop the RC10B2 and all the other B cars that followed, as well as the RC10T, TC3, and other models. Cliff’s engineering expertise is backed up by his driving skills, with a resume that includes seven ROAR National Championships, three NORRCA National Championships, and the 1991 IFMAR Off Road Electric 4WD World Champion title, among other wins. With a career that spans from AM radios and drafting tables to 2.4GHz and SolidWorks, Cliff was the perfect choice to discuss the evolution of RC technology and the industry behind it. 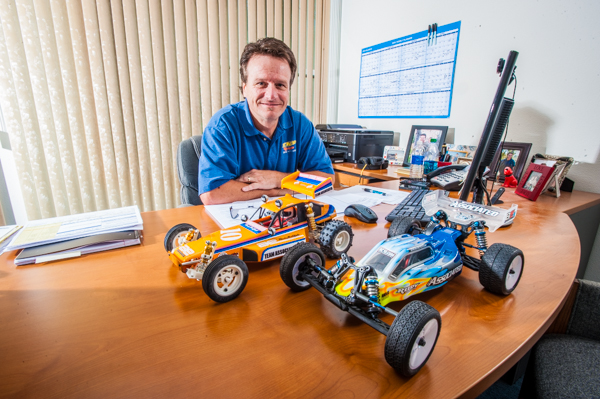 Team Associated’s President Cliff Lett at his desk at the company’s headquarters.

How did your long road in RC start?

I happened to drive by a RC event near Whittier, California, around 1985, and it was like a lightbulb turning on in my head. I couldn’t believe what I was watching—it was like a motocross track with RC cars going around it. I had to learn more. What was crazy about it was how barbaric the cars were. I got introduced to Jay Halsey at a race, and from him, I met Mike Reedy and then Roger Curtis and Gene Husting—the owners of Team Associated. By early ’88, I was offered a position and I jumped at it. It was an emerging industry with primitive cars that I thought I could have a lot of cool ideas for. I had already been racing for Associated and knew Jay Halsey and his dad, and they taught me a lot. Mike Reedy had taken me under his wing and took me to a bunch of races, so I learned the ropes and started applying what I knew. It was a completely new challenge and a big change in my life from the motocross industry. It was a way of applying what I had learned in the motocross industry, especially suspension- and drivetrain-wise.

What was your first project at Team Associated?

The RC10 had been out a couple of years, and I had already been racing it and developing it with Jay Halsey.  The base car was out, and it was very crude.  There were other cars coming to the market that were capable of being raced, and granted, all of the cars anyone would consider racing were kits and you spent hours and hours fitting things just trying to get the shocks to move and shimming things and getting it into race mode. Now, cars have changed and are perfect right out of the box. Back then, there was a lot of room for improvement, especially in suspension. So when I started with the new job, my responsibilities included getting the RC10 up to speed for racing.

And you were keeping a racing career going simultaneously?

Yes, and I went back to school at the time too. I didn’t have an engineering degree and I hadn’t finished my formal engineering education, so I went back to school. I was trying to race, be a pro, go to school full-time, and work at a full-time job in design. I was bringing the RC10 up to race level and that included longer suspension arms, better shocks, and lightening the car.

How different were the engineering objectives then compared to today?

We are all familiar with the evolution of tires and power in the cars. We are now detuning the power in the cars, and we have batteries that last longer than you can imagine and tires that actually hook the car up, so now the game and the way the cars have to work has radically changed. Back then, it was just getting them in the ballpark, and there were no computers to design anything. You were lucky if your company had a computer to do invoicing for orders. Scientific calculators were a luxury. You had a big drawing board, slide rules, pencils, and paper, and you went for it. There was a lot of trial and error and a lot of testing. Prototyping a part meant you machined it, where today we have rapid prototyping and 3D printing and so forth to actually sample the parts and get to production quicker.

And I’m sure it was much more expensive before computer-aided design and rapid prototyping.

Absolutely. The development cycle back then was extremely long, and the investment was huge because the product you designed had to last four, five, six, 10 years in some cases. Those days are gone. Today, to build a kit, you’re lucky to have it last two years. And the cars are evolving quickly to keep pace with track surfaces. Now, we have AstroTurf, we have sugared tracks—which came and went pretty quick—but people learned you could throw down some carpet and artificial jumps, and there’s a whole new set of rules now. The cars are evolving much quicker, and there’s more versions and they are more mature, which means there’s a base design and everyone works around it and cars are almost clones of each other at times.

Did you see design changes like the mid-motor buggies becoming more mainstream now, or did it just happen?

I think for mid-motor buggies to take over, other things had to change. You had to figure out how to get grip in the car, and if you go back just four to six years, the tracks weren’t blue-groove—well, there were a few, but you had a different car for those—but for 90 percent of the time, you were running on a blown- out track. It didn’t have great grip, and everyone was hunting for enough grip, so mid-motor didn’t make sense—the rear motor is what you needed. As tracks evolved into high-grip sugar-treated clay and AstroTurf, it allowed the mid-motor stuff to really kick in. We went from rear-motor to mid-motor to more mid-motor to forward-motor—the evolution is obvious; you are just shifting the weight farther and farther forward and making more or less an on-road car out of it.

What’s your take on that—is an AstroTurf track still “off-road”?

We are racing now on on-road tracks with jumps, which is a bit of a pet peeve with me because I’m kind of a purist from the old days and off-road is off-road to me. But these trends you can’t ignore, and not all of us are fortunate enough to live in Southern California where we can race on outdoor stuff all year- round. So we have to be sensitive to the needs of others around the world. We have people in Norway where they can only go outside for about three months a year, and that means they have to go indoors. If that means they have to race on carpet and have easier maintenance and have it consistent for everybody, so be it. There’s no doubt a dirt track is a lot of maintenance. When the sugar-water track thing came along, I think a lot of people saw it as the Holy Grail for tracks to stay consistent. But you can’t have sugar-water tracks indoors because you’ll have mildew and mold issues, and that is a whole other can of worms. So I think that came and went in over a month period of time (laughs).

The RC10 series has been highly successful. What do you think was the biggest thing to contribute to that?

Truthfully, I think it comes down to commitment and passion. We have a group of guys that don’t just show up at 7:30 a.m. and go home at 4:30 p.m. and check out. These guys are into it. My role has obviously changed over the years. I was the only designer at one time, and I was the assistant to Roger and his apprentice for many years. And then Curtis and I worked together, and we started hiring engineers in the late ’90s. Torrance Deguzman was our first engineer, and from there, it just kept growing and growing. We kept picking guys that weren’t just an engineer or designer but guys that were into it. That was a requirement: They had to be an enthusiast, get involved, go to the track and race, and know why we were making what we were making here. That’s a really key element around here. So that’s been kind of our formula here over the years, and it still is today.

Do you ever wish you could get back on the track at the top level again?

I would love to get on a plane and go to the IFMAR Worlds in Japan right now. I could help the guys, offer moral support… I can’t get out on the track and race with the top guys any more, but that’s OK because my job needs have changed. If I’m doing my job well, they can do theirs. Now, we have this big team of guys who are as passionate as I ever was building the top cars and racing at the highest level of competition and winning. They want to win and can work with others, because we are a team effort here, an entire effort. Now, we have guys who have been the top in their school, and many of their projects started out with them having an RC car and—bam—they were hooked and had the fever. That is the formula, and it trickles down in our product, because the goal here is to take any product out of the box and go win with it—even a World Title. I think that’s what has made Team Associated so successful. 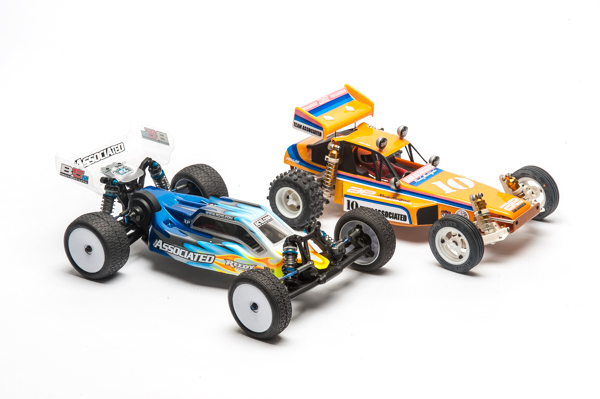 The B5M Lite and RC10 Classic; two buggies that span over three decades of off-road racing. 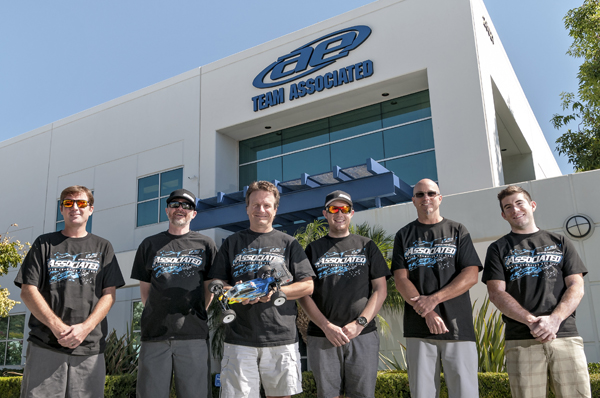