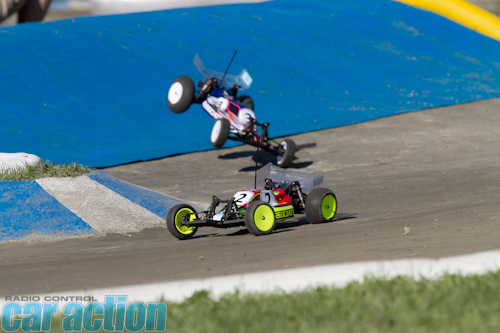 I don’t claim to be the best racer, but I’ve been around long enough to see what works and what doesn’t. Here are some timeless tips that I flat out guarantee will make you a faster racer.

1. Slow Down: The number one reason I see people going slow around a track (i.e. not winning) is that they’re trying to go too fast. Slow down! Don’t drive beyond your ability or the car’s. This is incredibly important in the corners. Slow down by either using the brakes or coasting into the corners. More than half the drivers at a club race overshoot turns. Don’t go sliding into turns. This kills momentum. High average speeds equal low lap times and consistently low lap times win races. I have yet to see a trophy handed out for highest top speed reached before flying over the pipe. Do like real race car drivers do and brake while going straight and apply increasing power throughout the turn. Slow down before you get to the corner.

2. Practice Smart: Turning lap after lap will make you better–eventually. Practice is almost always a good thing and more practice is almost always better. There is a difference, however, between practicing and practicing smartly. Step one to smart practice is having a friend video tape one of your races. Have him focus on just your car. Watch the video and actually study it. Look for every mistake you make. Did you go wide in certain corners on almost every lap. Are there certain parts of the track you crashed on over and over? Was there a certain part of the track that you consistently got passed on? Now when you go practice, focus on those areas and keep practising in those areas until you fix the problems you found.

3. Set Goals: When you ask most racers what their goal is they may say it’s to have fun and we applaud that, but when you dig deeper almost everyone admits the goal is to win. That makes sense; it is a race afterall. Now if you were running your first marathon, your goal would most likely to be to just finish. That’s what we call a realistic goal. If you’re in the B-main or bringing up the back of the pack of the A, you’re realistic goal should be to just be faster than your last run. Forget about your finishing position. After you corner marshal, go check out the print out of the timing and scoring sheet and look at your your overall lap total and time, your average lap and your fastest lap. Obviously, you want your overall time to improve, but your average lap time should be your main goal. That’s what you really want to improve. You also want to get that as close as possible to your fastest lap–that’s the sign of a good driver.

If you liked this article on racing, check out this one about the 5 best racers of all time.