It may be hard to believe, but my time spent with this edition of the Traxxas Slash 4×4 was my first time ever piloting an RC short course truck and likewise, first time with the Traxxas Slash platform. For seasoned RC-ers, this may be a shock of a confession since the Slash is one of Traxxas’ mainstay kits and is arguably one of the most popular vehicles in all of surface-bound RC. What I learned after familiarizing myself with the truck is that it is primed for bashing, racing, modification and all around fun for RC newcomers and pros alike.

The Traxxas Slash line of short course trucks has a well-earned reputation for driving fun, easy maintenance, endless modification possibilities and ultimate durability. It comes in many flavors including multiple 2WD versions, a stable of 4×4 versions like the one you see here, and there’s even one that runs on nitro fuel.

The differences between the models range from brushed versus brushless motor setups, electronic upgrades such as Total Stability Management and even scale. While most Slashes come in 1/10-scale, a smaller 1/16-scale 4×4 version is offered as well. In this review, we focus on the bread and butter 1/10-scale, brushed motor model, aptly named the Slash 4×4 1/10-Scale High-Performance Short Course Truck. 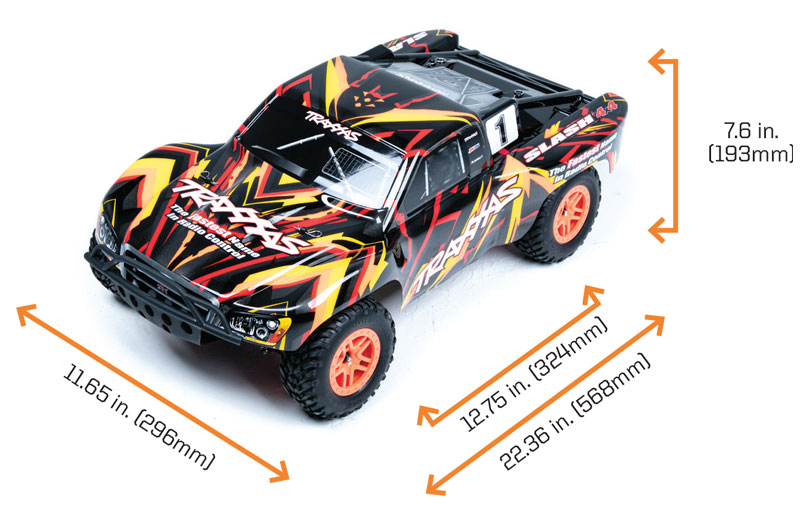 As with countless other hobbyists, the Slash journey began for me as soon as I unboxed it. This Slash 4×4 comes ready to run (RTR), and I mean ready to run right out of the box without anything extra to buy except for four AA batteries for the transmitter. The complete RTR kit comes with the pre-assembled and painted Slash short course truck, Traxxas’ venerable TQ 2.4GHz radio system, a Traxxas Power Cell 7-cell NiMH iD-equipped battery, and 4-amp DC Peak Detecting Fast Charger. After I got it unboxed, I plugged the battery into the charger to top if off and went on to examine the truck I’ve heard and seen so much about.

Traxxas’ website states that, “The Traxxas Slash set the standard for durability, performance, and fun by which all other short course trucks are measured.” One look at the Slash 4×4 and I could see that that statement isn’t just a simple boast. The 2021 edition of the Traxxas Slash 4×4 combines the most sought after elements of the upscale Slash 4X4 VXL with the impressively low asking price of $320 by outfitting it with a brushed Titan 12T 550 motor and a waterproof XL-5 electronic speed control. As mentioned earlier, this RTR kit is a true value being bundled with a radio transmitter, battery and charger to boot. 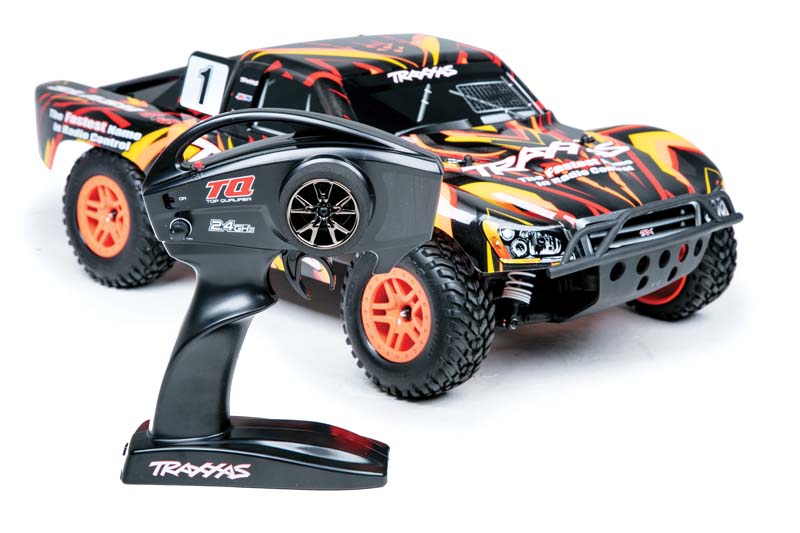 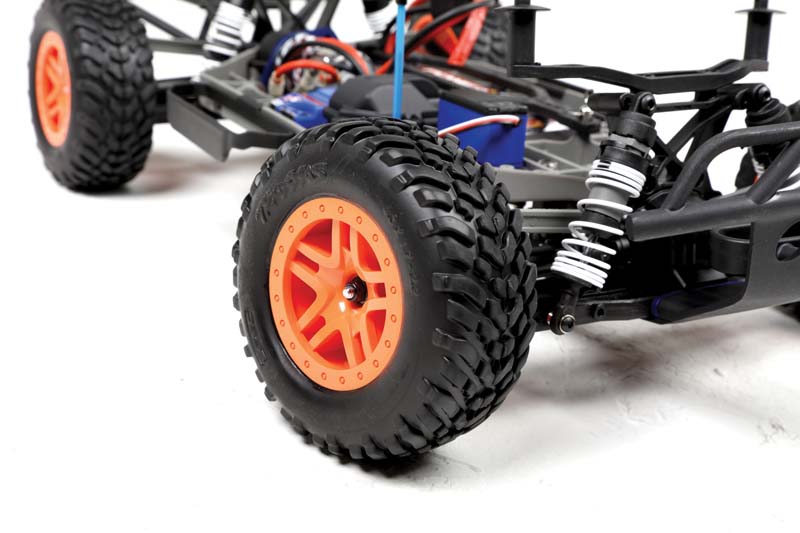 The Slash 4X4 comes equipped with a Traxxas Titan 12T 550 modified motor that is supplied with an internal cooling fan, which is an industry first for this class of truck. The integrated cooling fan lowers running temperatures for more drive time and reliability. I’m not a power monger by any means so a power derived from a 12-turn brushed motor does plenty for me in the kicks department.

The Titan 12T is controlled by the XL-5 Electronic Speed Control (ESC). This ESC features a completely waterproof design as well as many other features such as three throttle profile settings, low voltage detection, Thermal Shutdown Protection, 4-7 cell NiMH and 2-cell LiPo compatibility, as well as a built-in BEC. For beginners, the ESC can be switched to a Training Mode, which reduces the overall power output of the XL-5 by 50%, making it easier for young or new drivers to develop their control skills before unleashing full-power. 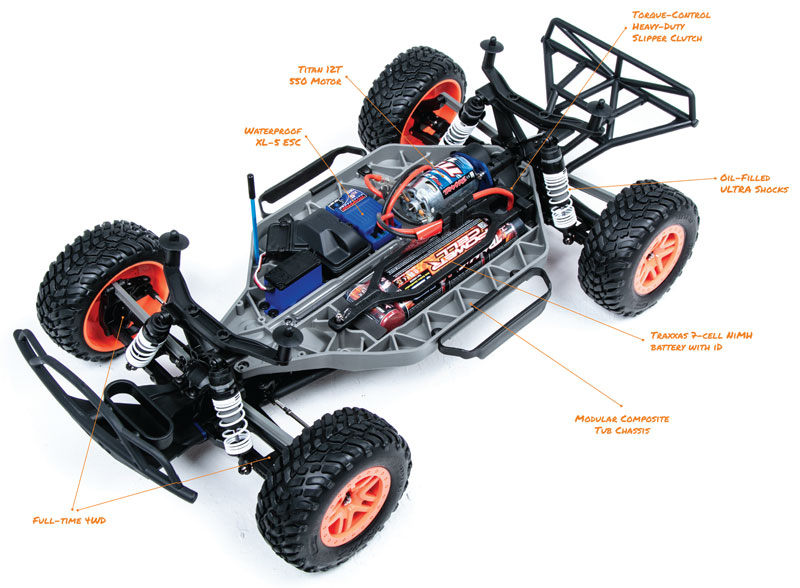 What I immediately noticed about the Slash is that the beautifully detailed body does not enclose the chassis. On one hand, that meant that dirt and debris could easily flow onto the chassis but on the other hand it made possible to plug in the battery and turn on the truck’s ESC without having to remove the body. The truth is, my experience even with enclosed bodies, dirt always finds a way in anyway so I did greatly appreciate the easy access to the ESC’s power button.

I also noticed that Traxxas made sure that the chassis did not leave much exposed to the elements so dirt and rocks entering the chassis is extremely unlikely to cause any issues. Even its driveshaft is protected under a clear windowed cover running down the center of the chassis, which is a nice touch.

The Slash 4X4 chassis features a long 12.75-inch wheelbase for added stability while offering nearly 3-inches of go anywhere ground clearance. The chassis includes drain holes and a battery tray channel for routing servo wires to the receiver. Because the Slash is so easily upgradable, Traxxas saw fit to include optional bosses in the chassis that make it easy to upgrade to Traxxas Velineon Brushless Power System if you so choose to.

On top of that, the nylon composite molded tub chassis features a modern modular design. Unlike older designs of 4×4 RC vehicles that require cumbersome and time-consuming maintenance, the Slash’s modular design allows the entire front section to be removed with just 5 screws. The rear assembly can be removed with only 4 screws. Full access for easy service and adjustment can be gained in under a minute. 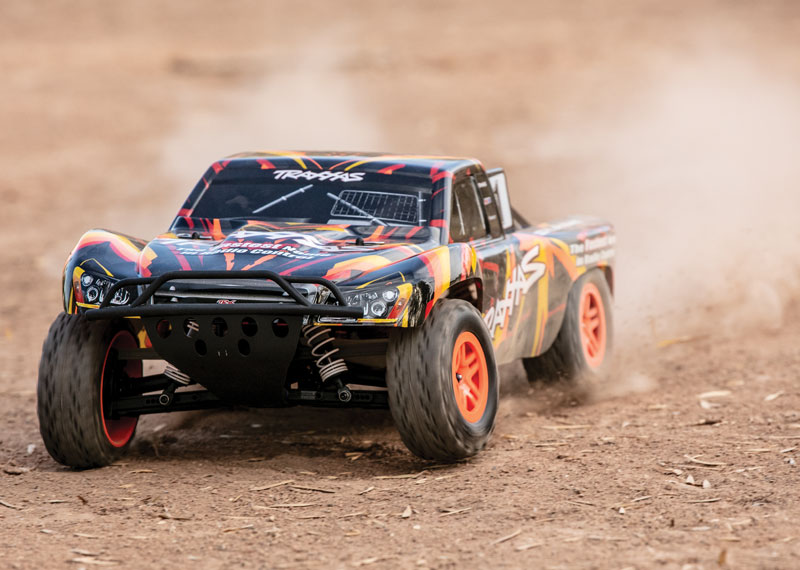 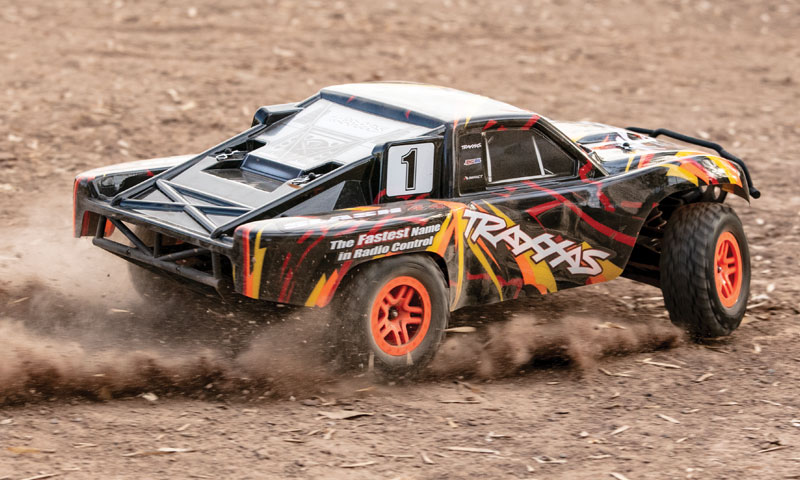 Slash 4X4 comes fully assembled and ready to run complete with pre-glued tires and an expertly painted and decaled body. What I was excited about is it’s 4×4 drivetrain. I’m an RC 4×4 fan and prefer 4×4 vehicles whenever possible. 4×4 brings about more grip and control over slippery terrain such as loose dirt and wet surfaces.

Traxxas engineers designed the differentials to be easily serviced. Simply remove the front or rear cover and the entire diff slides right out. Precision silicone gaskets and X-ring seals allow the differentials to be tuned for specific running conditions by varying the viscosity of the fluid inside them. Slash 4X4’s slipper clutch design uses special semi-metallic friction material and finned aluminum alloy pressure plates to dissipate heat and provide consistent traction control. The slipper is easily adjusted without disassembly or removal.

Regarding Slash upgrades, if you decide to step up to a brushless motor setup in the future such as a Traxxas Velineon VXL unit, the diffs’ steel gears and slipper clutch are ready to handle brushless power without requiring costly upgrades. In fact, the Slash’s driveline already uses heavy-duty 32-pitch gears, which easily accommodate future power upgrades down the road. 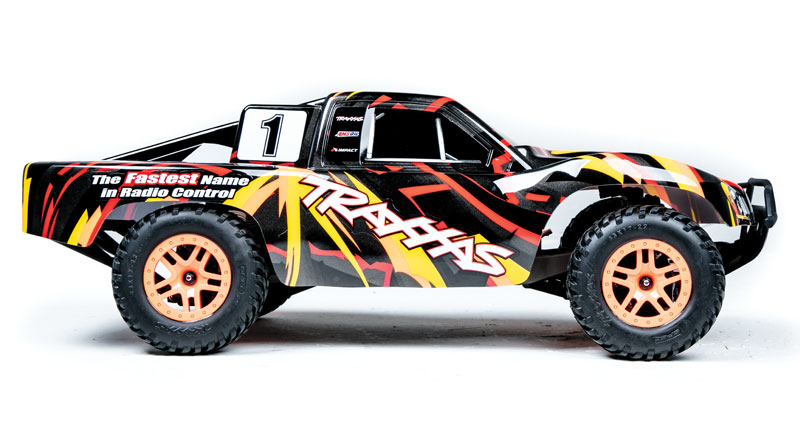 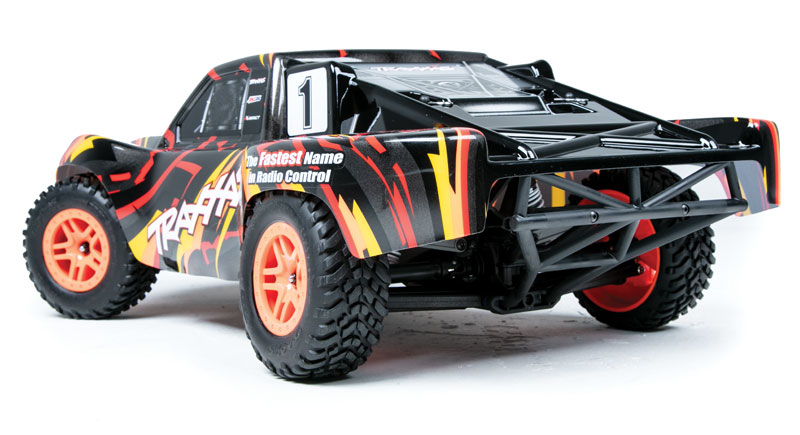 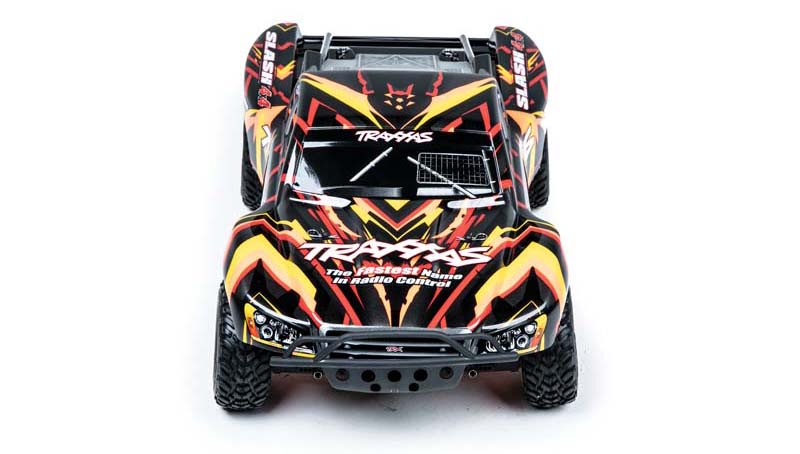 Having a suspension that can cruise over tough terrain at speed and elegantly land jumps is a trademark of real-life short course trucks. Think about a cheetah running at speed in the Serengeti plains. That’s how gracefully the Slash glides over dirt, grass and even loose gravel. Much of this remarkable performance is thanks to the Slash’s plush suspension. It absolutely swallows up jumps and delivers incredible rough-track control. All that travel gives Slash 4X4 an authentic look and handling response that simulates real-world short course racing.

The truck’s fully optimized front axle carrier is a result of computer modeling that allowed engineers to design for maximum articulation without binding or interference. Tight steering response is always there, even at the extreme ranges of the suspension travel. The Slash’s fully serviceable oil-filled Ultra Shocks are tunable with a wide range of oils, springs, and pistons. Features include pressure bladders for air/oil separation and spring clips to precisely change the ride height and spring pre-load.

After the 7-cell battery was fully topped off, I along with a couple of other younger drivers headed to our local park to put the Slash 4×4 through its paces. Don’t forget, this is my first time driving a short course truck (and Slash for that matter) so I wasn’t exactly sure of what to expect performance wise.

With the radio switched on, I reached under the body to press the ESC’s power button. Once activated, the Slash came alive. I first took a few slow runs around a baseball diamond and then onto the outfield grass. My initial thought was how easily controllable the truck was. The four-wheel drive driveline coupled with its long travel suspension truly swallowed up the terrain. The truck’s steering was remarkably confident and predictable as well. All of this is exactly what I like in a basher.

When I cranked up the speed, the Titan 12T 550 motor came alive and quickly blasted through the dirt and grass. Unlike with brushless power, the brushed power unit was respectful of the park’s terrain so I didn’t feel bad about gunning it at full throttle. It still kicked up plenty of dirt and grass but unlike with a brushless vehicle, that excess brushless power can tear up grass and dig patches in dirt so extra care should be taken on where you utilize that power. With the brushed Titan motor, you could go to full-speed without this concern.

The suspension action is fun to look at when it’s swallowing bumps on the field and the feeling of the steering while behind the wheel of the TQ transmitter is something to behold. I bashed around and drove the Slash 4×4 in figure-8s, did donuts, and searched for land features that I could jump. The thing absorbs whatever you drive it over. The Slash 4×4 gave me the feeling of what I imagine driving a real short course truck is like. Realizing that I was hogging up the controls, I handed the radio over to the youngsters I had in tow.

Both inexperienced drivers were all smiles when driving and watching the Slash run about the park. Jumping off curbs and running into the occasional tree, the Slash shrugged off the abuse and kept going. One of the young drivers even said that she enjoyed driving the Slash 4×4 much more over the more powerful brushless powered trucks that I have. At the end of our day at the park, the Slash 4×4 was dusty but showed no signs of damage or wear, even if it did see a few collisions. The battery even outlasted the drivers. I can now fully understand why the Slash is a perennial favorite. 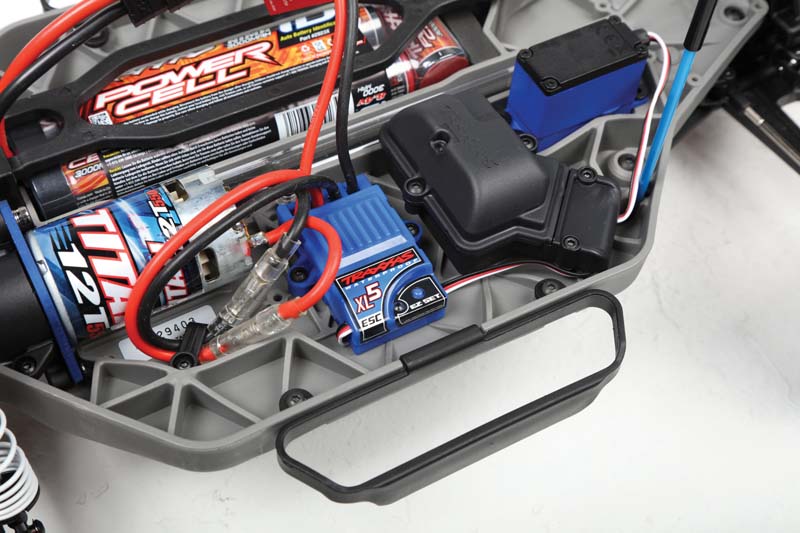 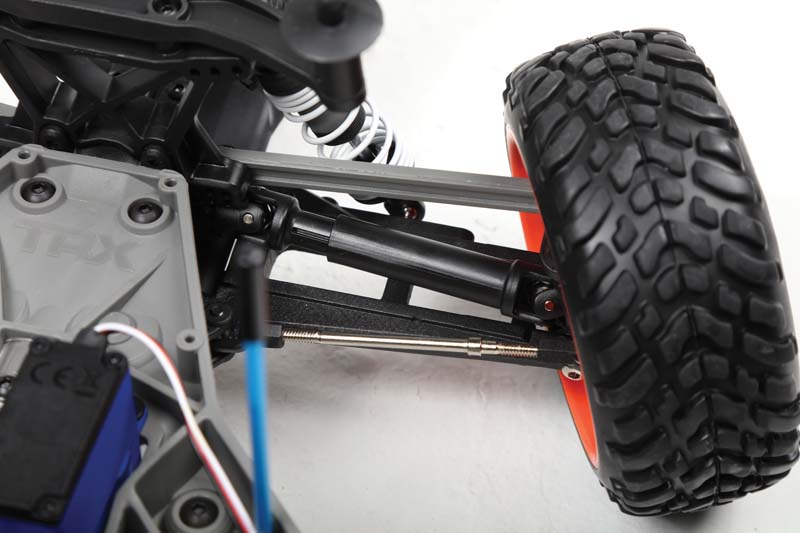 After well over 30 years playing with RC, I have never touched a Slash until now. How is that possible? I’m not quite sure. But do I regret not getting one sooner? Absolutely. The Slash 4×4 delivers in all aspects that I search for in a fun RC basher. It’s incredibly fun and satisfying to drive, it’s affordable, it’s survivability is off the charts and from what I hear, the upgradability is second to none. I’m sure I’ll soon find out more about that last one. Stay tuned to see how I modify it in a future issue of RCCA. Until then, you can find me at the park draining more than a few batteries with the Slash 4×4.

Text and Photos by Jerry Tsai