Sometimes the creative bug bites you and infects you with an energy that won’t let go until you’ve accomplished what you set out to do. Maybe you have an idea on how to better detail your overland crawler or maybe it’s trying out a new wheel and tire compound on your drag racer.

There are times when that creative bug really takes hold and compels you to make something really special, a complete custom build from the ground up. Admittedly, this doesn’t happen to everyone, but we love it when it does. In the case of Scott Lempert, the creative itch was scratched while taking on two special scratch built projects.

Lempert takes us along with him on his journey to create an incredible Winnebago Hauler and Bug combo that is sure to please you eyes. We know we were blow away to see this fantastic duo. Let’s here it in his own words, shall we? 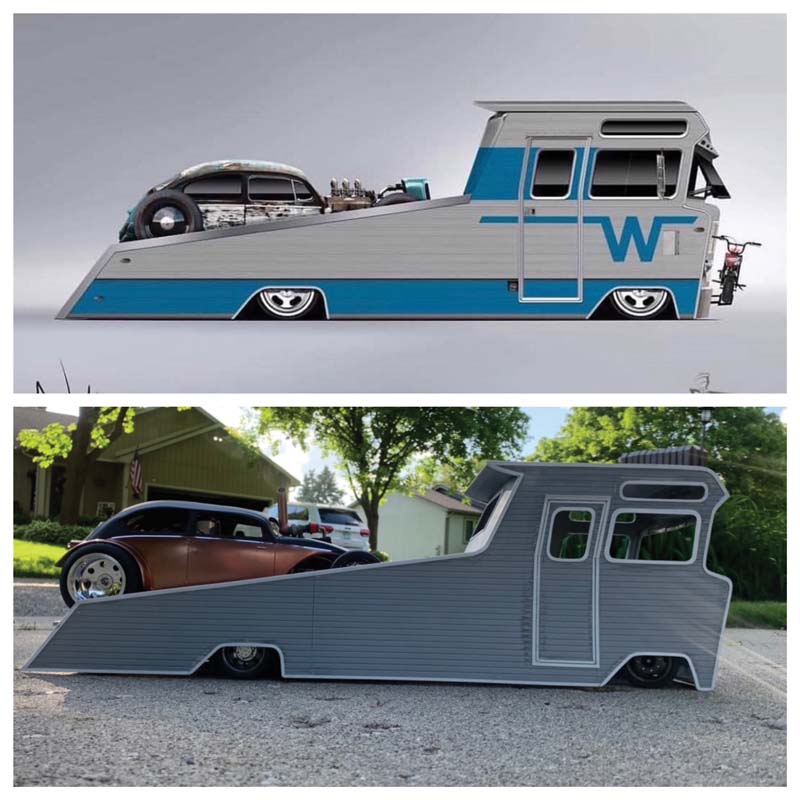 Lempert based his build on this rendering made by artist Nick “surfacenick” Crouch. See more of Crouch’s incredible works at: surfacenick.com.

A Tale of Two Builds

My name is Scott Lempert. I have been into RCs for longer that I’d like to admit. It started with a Radio Shack Golden Fox, then on to a Tamiya Fox and then about 100 or more after that! You name it, electric, nitro, on road, off road, helicopters, crawler’s and scalers.

About five years ago, I was at a local Recon G6 event and saw a Brute JK build that I thought was very well done. I have seen a few crawlers on the RCCrawler.com Forums previously that had a little custom styrene work done to them but the Brute JK at Recon G6 was more true to scale and very well done. After speaking with the owner and checking out his build in detail, I felt it was time for myself to jump into the world of styrene.
That was about 50 to 60 or so scratch builds ago. Fast forward to the subject of this story. I never know where my inspiration will come from. Some days I will have no clue nor will I be planning to build something when an idea comes to mind.

I was on Google one day, not sure what topic I had keyed in, but this rendering of a Winnebago modified into a ramp truck/car hauler that was done by Surfacenick.com for Hogie Shine’s Collision Center grabbed me. Now to step back a bit, I had just finished another build loosely based on an Ian Roussel creation. It was a scratch-built VW Bug that I thought, “WOW that BUG would look great on that Winnebago!”

So I thought, cool, let’s do this. I began looking for one of those large-scale vintage die-cast Tonka Indian all metal toy RV’s and figured I’d just cut it up. After researching the dimensions of the steel version, I realized that the BUG would not fit as it was almost 19-inches long by itself. The Tonka die-cast version was only 22-inches long in its entirety so it wouldn’t work out.

Plan B! I set off to design a scratch-built version of the rendering that I saw online. That awesome rendering only had the profile done, so I had to complete a few details on my own. I figured the length at 1:10 scale needed to be around 30-inches or so. 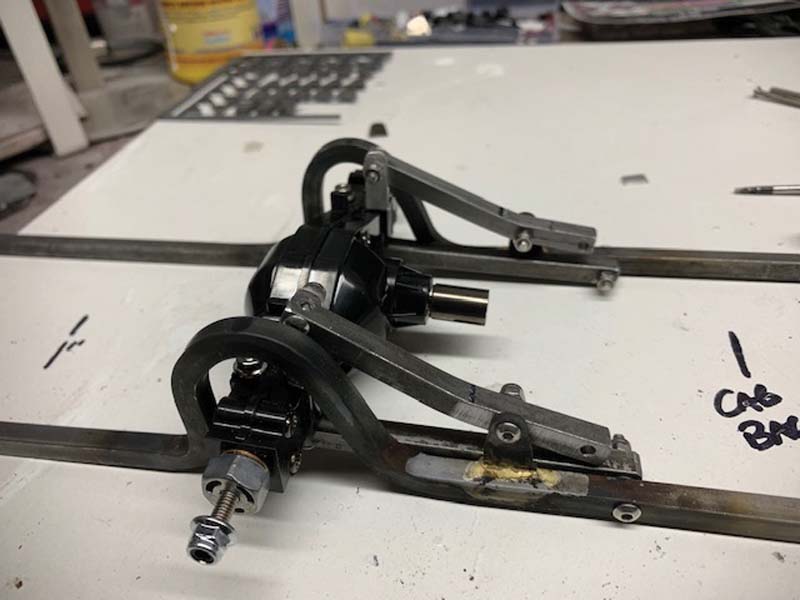 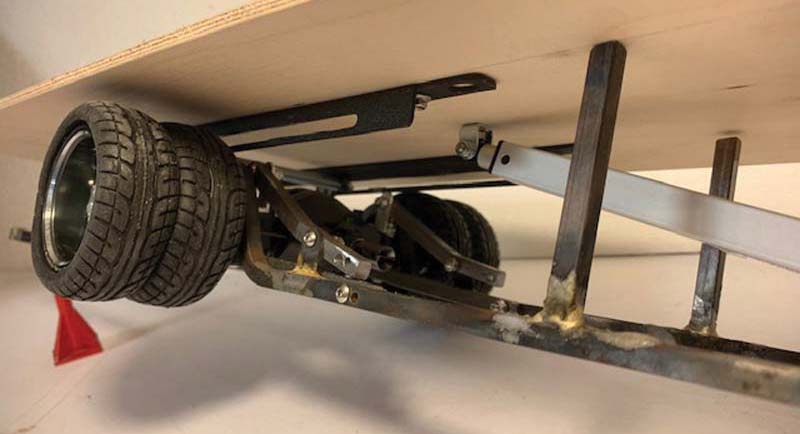 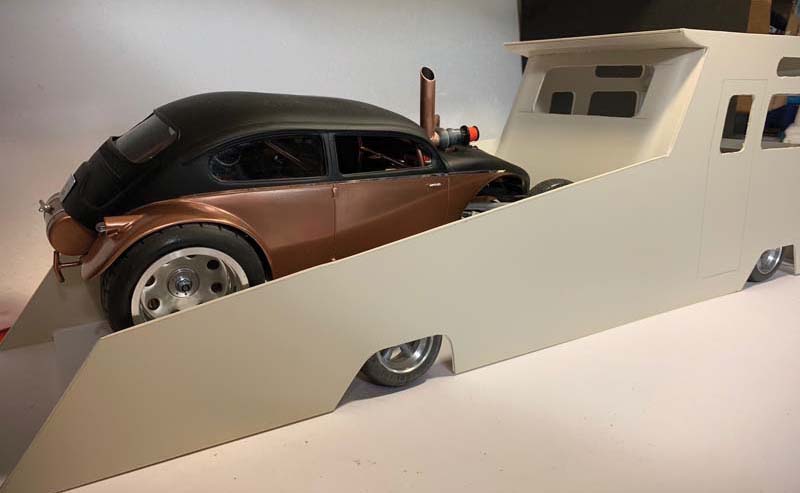 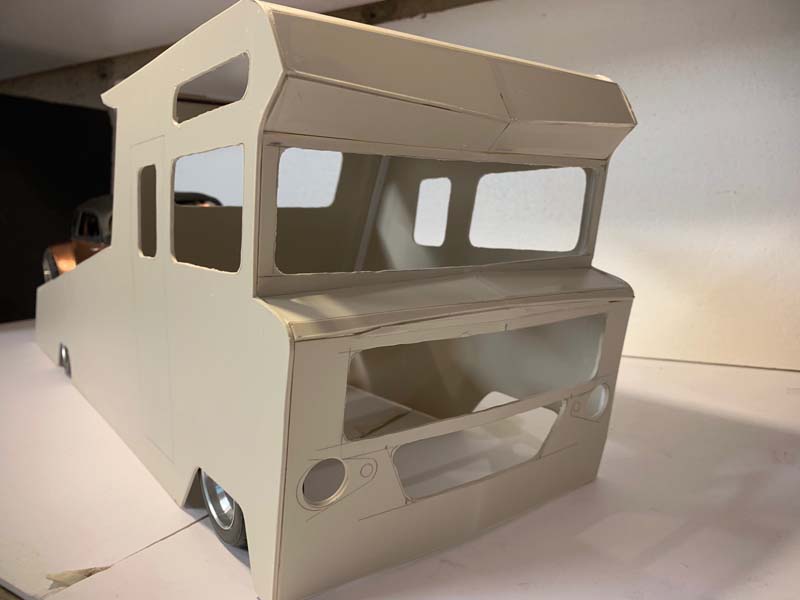 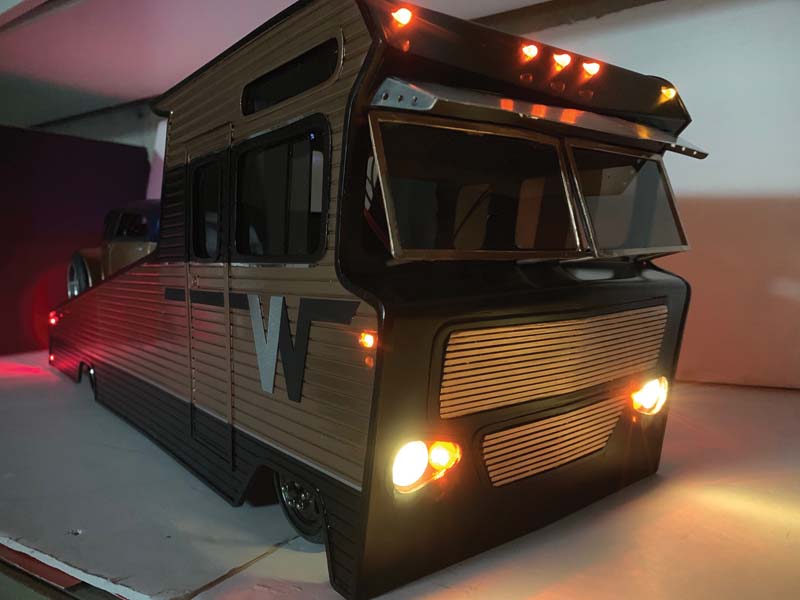 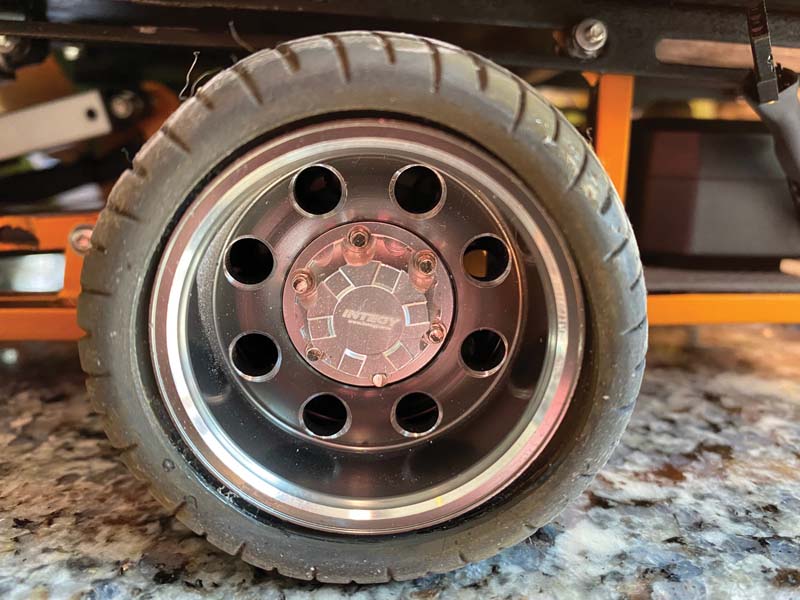 I had been experimenting with heated bent and formed quarter-inch square steel stock for the chassis. I laid out the wheelbase, which was 17-inches long. I formed the rails using an Eastwood tubing bender and Mapp gas tank that I got from Lowes. I heated the areas to a nice cherry red, then bent as necessary, added the “C” channel areas for the rear axle to reside in, added the ramp stops and other mounting points. I used stainless steel hardware from KNK Hardware.

I wanted to not just have a static ramp but one that could slide to unload the BUG. The ramp deck is made from wood that I covered with RC4WD Diamond plate. It is controlled by a Firgelli linear actuator, which slides the ramp back and tilts to unload the BUG. A winch slowly releases the BUG off the ramp. [Editor’s Note: A video of the ramp in action is available on Lempert’s YouTube channel, look him up at: /tunedtweakedandbuffe]
I also wanted the Winnebago to sit as low as possible. So, the front and rear axles are both Tamiya King Hauler units that are also actuated by Firgelli linear actuators. It only raises about 3/8 to half-an-inch, just enough to not rub while driving it.

One challenge to this chassis design was that the actuator for the ramp was dead center of the chassis, since the motor and transmission are in the front, I needed to offset the driveshaft to go around the actuator mount. The motor is an “import” special 17T that is controlled with a 60A Brushed ESC and fitted with a powerful 5:1 planetary transmission. For the steering servo, it uses a Tower Pro 996R. For an extra touch of realism, it also has an ESS-One sound box. The sound system adds sound to your RC and includes as much as 25 different engine sounds and over 20 auxiliary sounds such as horns, sirens, and turbo noises.

I did run into a few obstacles on the chassis build, I originally used dual servos for the rear axle and one front but given the weight (with BUG on its back, it’s about 20-pounds) they would not work so the actuators that were used. That’s why I went for Firgelli linear actuators instead. The wheels on the Winnebago are Integy Gun Metal SEMI, duals in the rear and singles out front. Tires are just rubber on-road pieces I found in my spares stash.

When it came to tackle the body part of this project, I knew that I wanted a one-piece design. I did not want any seams in the sides of the body, so I found styrene .080 cut-offs that were 12” x 36” long on eBay. I made a full-size template by enlarging the rendering and traced it onto the styrene. After cutting out the sides, I began to connect the dots! I filled in the nose, added the roof, and closed in the back of the cab. I added the rear section to drop over the frame rails. After cutting out the window openings, I realized that I would need to create the corrugated siding, I needed it to look super straight and was not sure how I would do it.

I found the solution in Plastruct part number #91512, which is a ribbed roof material for HO-scale model train builds. It is ribbed like a metal roof, so I inverted it and was surprised how close it was to the RV siding I was looking for. I tried to replicate the rendering as closely as I could, so I added the tilt out front windshields, made the bumper mount “pit bike” holder, added working marker lights, headlights, and taillights. There are 20 LED’s in all on the build.

The BUG, was actually something I had wanted to build ever since seeing something similar on Ian Roussel’s Full Custom Garage. As I mentioned, it was built before the Winnebago and wound up being an integral part of and an inspiration for the Winnebago build. I started with the body first, which is a Tamyia Super Beetle. I extended the hood, shaved the front fenders and chopped the roof. Once I was done, I built and tailored a custom chassis around the customized body.

The basis for the BUG’s chassis design is an all-custom fabricated quarter-inch square steel chassis that features Tamiya King Hauler front and rear axles. The rear end is a 4-link with 1/16 scale Traxxas E-Revo shocks. I wanted something different for a front suspension, so I set up a set of quarter-inch elliptical springs and connected them with radius rods to the chassis.

The steering servo is a Hitec Micro unit concealed alongside an Exclusive RC 5.9 3D printed Cummins Diesel engine. I used a generic brushless system on this with a 3:1 planetary transmission. I made a front bumperette with headlight brackets and added the rear gas tank and nerf bar. The BUG uses all KNK Hardware for the assembly. 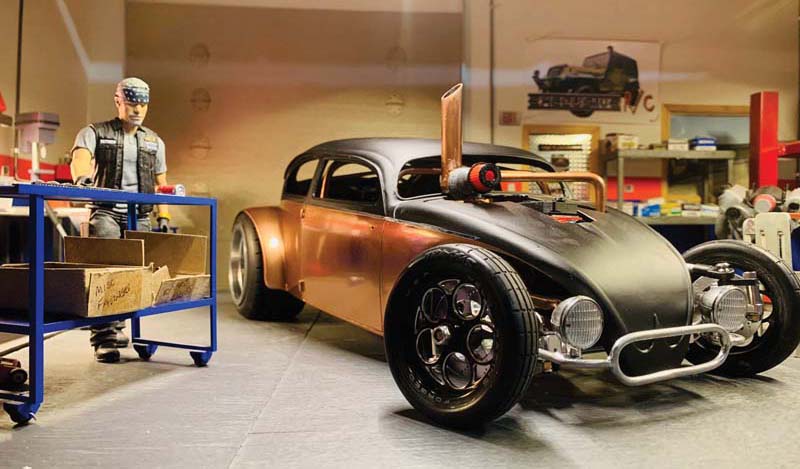 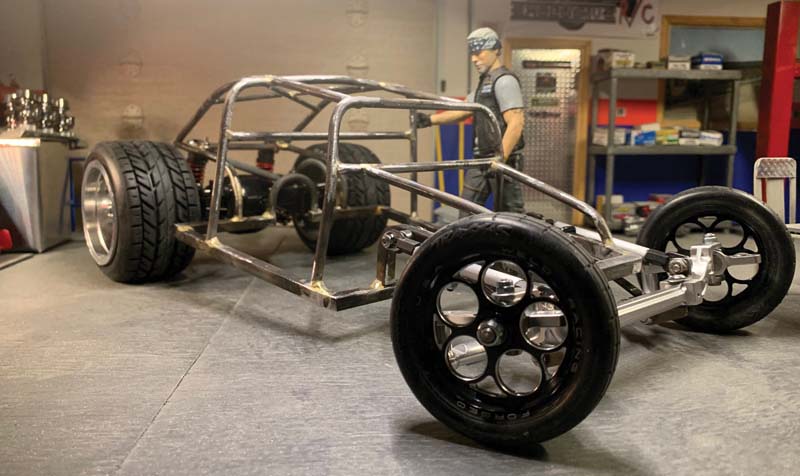 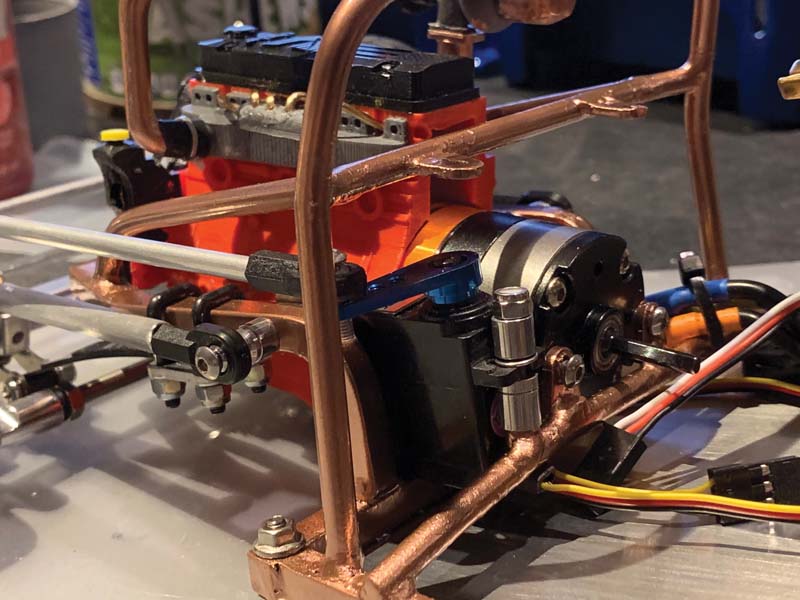 Lempert’s fully custom Winnebago Hauler and chopped BUG are truly something to behold. Inspired by seeing the builds of other RC enthusiasts is how many custom builders get their start. We love seeing scratch builds like Lempert’s and hope that seeing his creations will have the creative bug biting you too.