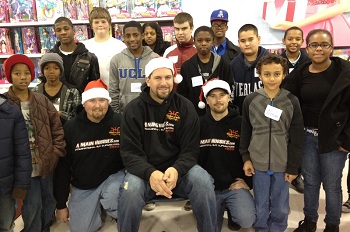 Brad Miller, founder of BMiller Racing (http://bmillerracing.com), recently hosted a Christmas shopping spree for 21 kids enrolled in the Sacramento-area chapter of Big Brothers Big Sisters. Team drivers Terry Wickum and Lou Figueria were on hand to assist in the festivities, which provided each of the 21 kids with a $300 gift card at Toys-R-Us to spend on anything in the store. Widely recognized as one of the most charitable players in the NBA during his 13-year professional career, Brad has hosted the Sacramento Big Brothers Big Sisters shopping spree for the past 10 years.

Brad’s overall national contribution to Big Brothers Big Sisters has totaled nearly $1 million over the years. For the past eight years he has hosted the Brad Miller Golf Outing, Gala & Auction. This past Fall the event raised more than $150,000 for the local chapter of Big Brothers Big Sisters in his hometown of Kendallville, Indiana. More than 600 community members came out to participate in the two-day extravaganza.

Brad has a special place in his heart for Big Brothers Big Sisters due to the fact he was mentored by the program as a youth. In 1985, a then eight-year-old Brad was matched with Big Brother Dewey Forbes in the Big Brothers Big Sisters program. Although their official match in the program ended when Brad turned 18 years old, their relationship remained strong as Brad’s career advanced him from Purdue University to the NBA. 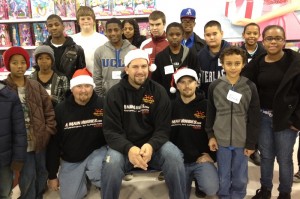 If you like this article, check out this additional article on BMiller Racing.