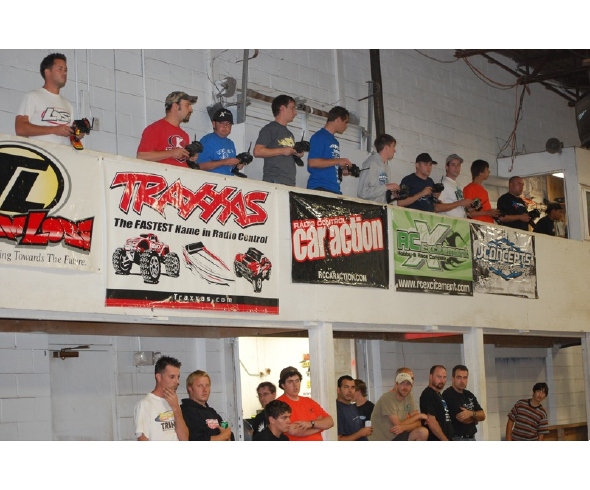 With a cool break from the hot Florida weather, we could feel the season changing and the competition heating up inside R/C Excitement for the 1st annual Northeast Championships. An amazing weekend for racing in Fitchburg, Massachusetts was upon us and with racers traveling in from 17 different states including Steven Hartson (California), Brian Kinwald (Arizona) and Jason Ruona (Florida); there really was new feeling in the Northeast on this weekend.

Friday started with drivers arriving early for practice and some test and tune before qualifying on Saturday. The track layout was challenging and with a thin layer of dust toward the outside a very technical approach was needed to drive the track consistently and to produce the best lap-times.

4 rounds of qualifying were scheduled for Saturday and they started promptly with Chris Cristo and Jason Ruona getting off to a quick start in the Short Course classes by TQing the early rounds.

Ruona, utilizing the new Bar Codes tire in SCT Pro Modified looked like a favorite after round 1 but with Brian Kinwald and home-town hero Mike Wilder in the mix, it was destined to be a close battle all weekend.

Cristo remained in control of the stock classes all weekend with his X-Factory converted 2wd, truck and SCT and would sit on the pole position in all 3 classes.

Steven Hartson with his Associated B4.1 and B44 quickly rose to the top of 4wd and 2wd modified with perfect scores after rounds 1 and 2 securing the front position on the starting grid. Flying in from California, Steven ran his “go-to” tires all weekend, the reliable Bar Codes in Gold compound.

James Schlick took to the top spot in modified truck looking smooth and consistent all-day Saturday. James, one of the quickest drivers in the Northeast, also qualified 2nd in modified buggy.

A break in the schedule Saturday night gave an opportunity for an “Ask the Pros” session. Steven Hartson, Paul Sinclair, Jason Ruona, Brian Kinwald, Kevin Hetmanski, James Schlick, Rob Betts and Johnny Logiudice participated in the Q&A session giving advice to anyone in need. With questions ranging from driver control, tire selection to ride height and speed control settings just about everything was covered in the brief meeting.

Sunday started with the A-main drivers prepping their vehicles for the feature mains, while other drivers sitting in the lower mains were looking to bump up to that elusive open spot in the A-main. Track conditions started to groove up on the inner 2′ of racing line which seemed to create even better racing and judging from the opening few mains, racing was extremely close.

The mains started with Chris Cristo picking up big wins in all the Super Stock Classes. Chris was challenged early but eventually pulled away from the field to secure the highly sought after victories. The X6 squared, X-60 and SCX-60 were on rails all weekend and with consistent and smart driving from Cristo the combination proved too much for the competition.

The Short Course 2wd Pro Modified class was up quickly and TQ Jason Ruona got off to a great start with Kinwald and Mike Wilder following closely behind. With Kinwald and Wilder battling, Ruona stretched his lead and looked comfortable. With a comfortable lead Ruona began to cruise until an unfortunate accident where the turn-marshal placed a vehicle right on top of Ruona as he was making the small double coming off the straight-away. The race was now on as Kinwald took a small lead over Ruona with Wilder clearly in-sight. Ruona made up the lost distance and was now right at the back of Kinwald coming onto the front straight-away. The 2 vehicles touched with Ruona overtaking and driving into the lead. The last several laps were exciting as the 3 drove very close with Ruona pulling a big enough lead on the last lap to secure the victory with Kinwald taking 2nd and Wilder in 3rd. Ruona’s Factory Team SC10 was covered with JConcepts all weekend including the Manta body, Rulux wheels and SCT Bar Codes in Green compound.

4wd modified, the fastest cars on the track lined up in order for the 8 minute A-main. TQ Steven Hartson took off in the lead and was completely checked out on the field. Hartson, pulling some of the quickest lap-times of the weekend was out and gone by the 4 minute mark and the only battle was between 2nd and 3rd. Mike Gay (Pennsylvania) who had been very quick all weekend held a slim 5 second lead on Jason Ruona who was in 3rd. A few mistakes by Mike allowed Ruona to close in and overtake for 2nd. The 2 drivers remained within a car length for the last several laps and after a last turn desperation was unsuccessful for Mike, Ruona took home 2nd place behind Teammate Steven Hartson who crossed for the win. All 3 drivers, Hartson, Ruona and Mike Gay were driving the B44 utilizing JConcepts Bar Codes in Gold compound with Illuzion bodies and wings.

Modified truck started off with TQ James Schlick in complete control with a sizeable lead. Catching up into traffic caused some issues for James which tightened the race considerably and now Mike Wilder was in great position in 2nd. With a great battle on his hands, James was now a little more cautious around traffic and racing along side of Mike. The hometown crowd was clearly behind Mike and while the race was on, it wasn’t clear who had the advantage. Toward the finish a back and forth battle was shaping up which came down to the last-lap. The 2 drivers got together on the final laps a couple of times with Mike eventually coming out on top, thrilling the home crowd. Finishing order was Mike Wilder 1st, James Schlick 2nd and Andrew Parente 3rd. Mike was running JConcepts Bar Codes in Gold compound all the way around on his X-60 truck all weekend.

2wd modified was easily one of the most competitive races of the day. TQ Steven Hartson appeared to be very quick but a few mistakes early cost him the lead and James Schlick led for many laps. Steven, running the quickest laps pulled right up on the back of Schlick but could not make a clean move without a mistake, ultimately dropping back again with another mistake. Meanwhile Brian Kinwald and Johnny Logiudice were making a run into the 3rd and 4th position and Kinwald looking strong and confident was pressing and pulled in to the lead group. Hartson finally moved into the lead and looked to be checking out when a blocked view of a turn caused him to run into a back-marker which gave the lead to Kinwald. With only 2 laps remaining with Kinwald leading, Hartson made a desperation jump / block / pass on Kinwald on the next to last jump which gave Hartson the lead. Not wanting to win on a block pass or tangle, the 2 drivers waited not wanting to take the checkered flag with guilt. Unexpectedly Johnny Logiudice was so close that he drove around the outside of the 2 lead cars, taking 1st place. Hartson took 2nd with Kinwald in 3rd.

The 1/8th electric class was tight and competitive all weekend. The track was just as much a challenge for the 1/8th as 1/10th which seemed to create great racing. At the front of the pack all weekend were Scott Furtado and his Losi 8ight-E buggy. Scott maintained his edge throughout the race with a steady drive on his way to capturing the victory. Finishing in 2nd was Steve Obrian with Nelson Sousa finishing in 3rd.

A huge thanks and congratulations go out to Todd Anderson and R/C Excitement and crew on a fantastic event. 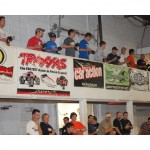 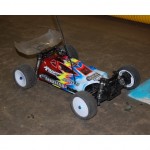 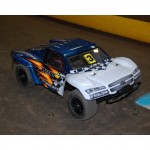 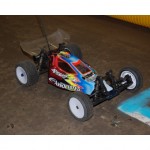 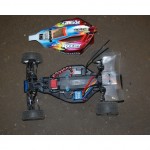 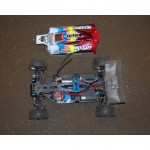 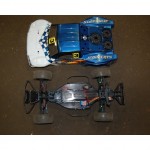 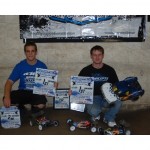 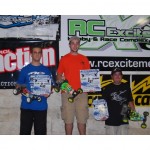 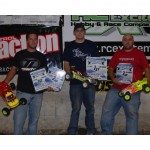 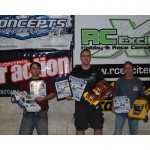 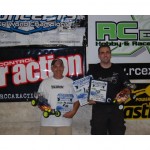 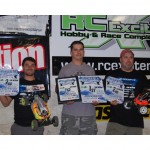 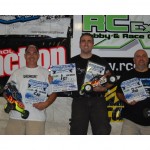 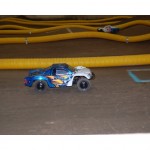 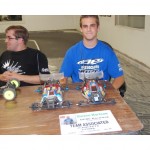 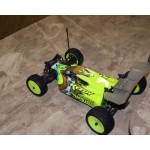 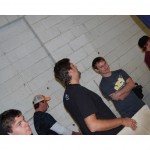 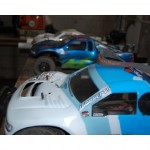 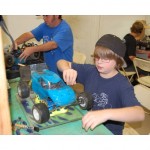 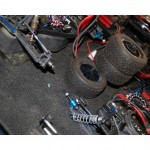 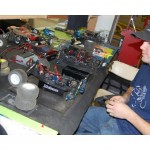