RC Excitement in Fitchburg, MA hosted the latest event in JConcepts off road racing event series. The JConcepts NE Championships features drivers from not only the northeast but all around the country. TQ Factory team drivers took on drivers from four other chassis manufactures including former World Champion Brian Kinwald, Team Associated’s Steve Hartson and JConcepts Owner Jason Ruona.

The showcase event was 2wd Modified class with five different chassis’ in the A Main. TQ had the most with three SX10 2w’s qualifying 3rd – James Raupp (who won the third round of qualifying), 5th- Johnny LoGiudice and Kenny Ferris was 7th. As the main started it was an incredible display of driving, many battles including the one for the lead with drivers inches apart, lap after lap. The unique JConcepts format of 8 minute A Mains, started to take its toll as the race when on. Johnny stayed with the leaders (Hartson, Kinwald and Losi’s James Schlick) the entire event, never falling further back than fourth and moving up to third as others had accidents. On the last corner of the last lap Kinwald and Hartson tangled. Johnny drove through the incident and down the main straight to take the surprise victory. Everyone was stunned and some, who were in the race, did not know who won until several minutes later. The consistency of his SX102w kept Johnny in the race to make the pass when it was needed most. His chassis was equipped with stock shocks, graphite shock towers and rear brace, as well as aluminum hubs and arm mounts. James and Kenny fought long and hard, sometimes with each other, during the main to come home in 5th and 8th place.

Johnny and Kenny qualified 4th and 6th in the 4wd Modified class A Main and unfortunately while Team Associated Steve Hartson ran away with the win, Kenny was locked in a three car battle for second place that moved back and forth as the race went on. Kenny was in 3rd much of the run, but fell back to 4th the last two minutes of the race. He finished 3 seconds behind second place and second behind third to just miss the podium. Both guys ran the box stock SX10 4w, with no modifications from the factory.

In Truck Modified, new team driver Justin Lopes was on fire in early qualifying, winning one round and placing second in another. Ultimately he would qualify second overall with Pete Davagian qualifying 8th and James Raupp qualifying 9th. The start of the main was an ugly one, as an immediate accident off the start left the SX10 T’s towards the back of the field. After 3 minutes the running order remained stagnant and positions were hard to come by. Justin finished 7th, Pete 8th and James 10th.

In Truck Super Stock, Nick Malato qualified 6th and had a great start to be 2nd after the first lap, but a string of unfortunately laps moved him back to 5th for a final result although he had the third fastest lap of the race. Once again, all the SX10 T’s were being run in stock form with some drivers using aluminum options like hubs and arm mounts on the rear.

The only SX10 SC at the race was run in Short Course Pro Modified by Mike “Zippy” Ziolkowski. Zippy qualified a very strong 5th behind factory Associated and X Factory drivers. But like the truck A Main, got caught in a big first lap pile up and was stuck way back in the field. At one point race winner Jason Ruona had lapped Zippy, but he spent several laps just following Jason around the track before moving over to allow Brian Kinwald a chance to battle Ruona for the race victory. Zippy was running a stock SX10 SC Pro Roller kit with some option parts being tested for our short course program.

A special thanks to Jason, Allison and J Concepts for sponsoring a great event. Todd and the RCE staff for a great show. Also to an extended thanks to Steve Hartson and Brian Kinwald for putting on a great show for all in attendance and for showing incredible sportsmanship in the end. 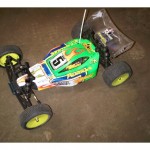 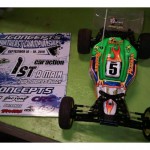 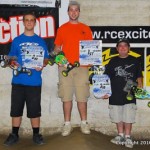