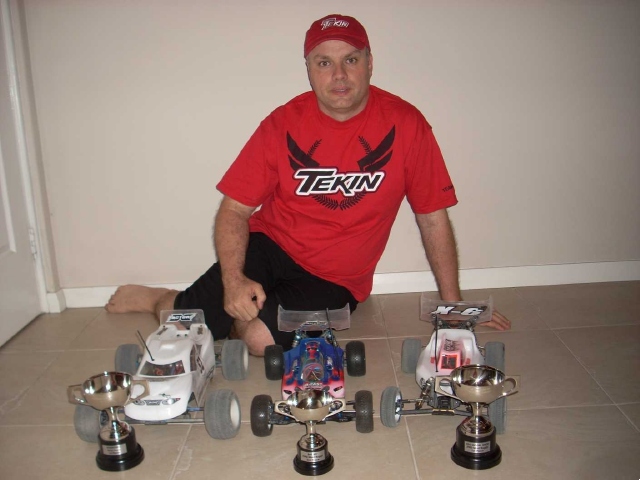 The 2011 Electric offroad nationals were held in the sunny Hawkes Bay on the East Coast of New Zealand over the weekend of April 1st ,2nd and 3rd. In total there were approximately 125 entries which is very good by New Zealand standards.

“I arrived early on Friday morning for practice and there was already alot of people there. The track looked very good. After running my cars in practice it was obvious the track was also going to stay very very slippery all weekend as well. In fact it was probably the slipperiest track I have ever run on.

Qualifying went ok but I was never quite on top of my driving and ended up 2nd in Truck Mod , 2nd in 2WD mod and 5th in 4WD mod. After a long night wrenching and changing a few more things it was finals day. I was quietly confident I could do better than qualifying. Each class had three finals with the best two counting towards your points and your throw out race being used as a tie breaker.

In Truck mod things did not go well in the first final and I had to pull out after two corners with a broken front arm. But luckily for me things went very well in the final two finals and I won them both setting fastest race and fastest lap time along the way. I also had the only 12 lap run of the meeting in Truck Mod in the second final giving me the National Championship in Truck Mod with Tekin Power!

In 2wd mod things were going to be very very close between myself and two other drivers. In the first final I had a second after struggling with a bad start and fighting my way back through the field. In the second final there was an early three way battle for the lead but by the half way mark the other two drivers had made errors and fallen back so I went onto win. In the third and deciding final I sat third all the way and in the end only missed 2nd by 0.08 second. The other top three driver Steve Oyston ran away with this race driving a faultless race. So that meant there were three of us tied on 19 points. However because my throw out race was a third and the other two drivers throw out race were much lower results I became the 2WD modified National Champion with Tekin Power.

In 4WD modified I had had two good results in the first finals but neither of them were wins. I had a mathematical chance of winning my third national title for the weekend but I would have to win and some other results would have to go my way. My car was now as quick as the other two drivers that were in with a chance and in the third final we were running nose to tail for a while. In the end I finished a couple of seconds away from first in a mistake free run. So I was third overall.

It was a great weekend for me my Tekin motors and speed controllers performed faultlessly. And it was the versatility and adjustability of the Tekin Speed Controllers that helped me adapt to a very slippery track.” words by Darren Johnston.