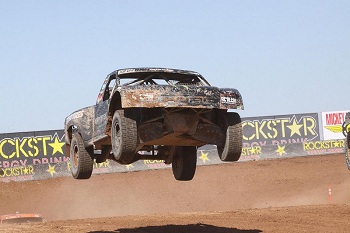 This past weekend kicked off the beginning of the 2012 Lucas Oil Off Road Racing Series (LOORRS) at the Firebird International Speedway in Chandler, AZ. After a long off season the drivers, teams, and fans were ready for some high energy racing to take place.

Team Associated’s Kyle Leduc came out of the gate throwing blows, posting a lap time that would place his newly sponsored Monster Energy #99 Pro-4 on the front row. After an inversion of 4, it gave him a starting spot in the second row. When the green flag dropped on Saturday afternoon, Kyle wasted no time picking apart the field in front of him. Once Kyle got into the lead, he ran away from the other racers showing that his hard work in the off season paid off huge. When the checkers flew, Kyle was still on the top followed by Adrian Cenni and brother, Todd. Along with the race win, Kyle also was awarded the “N-Fab Fastest Lap” award for turning the fastest lap in the race.

Sunday morning, Kyle picked up where he left off the day before. During qualifying, he laid down a blistering lap to claim the #1 qualifying spot, and another second row starting spot once the inversion was pulled. Racing that afternoon was much like a replay of the day before. After the start of the race, Kyle again worked up into the second place and threw down an epic battle with Adrian Cenni, which at one point had Kyle looking at the racing surface through the side window. Kyle made the pass and continued to stretch the distance between him and his fellow competitors. At the checkers, the finishing order was the same as the day before, with Kyle on top of the podium followed by Cenni and Todd Leduc in the third spot. Along with his second win of the weekend, he also doubled up with his “N-Fab Fastest Lap” award.

In the Pro-2 class, Team Associated’s Robby Woods caught the invert and gained himself the front row starting spot. Robby fought hard to keep the incredibly talented and fast Pro-2 field behind him. After a slight bobble, drivers Marty Hart and Rob MacCachren were able to get by and show how tight the field was. Robby showed his heart for racing and was able to hold on and get his Team Associated Lucas Oil/Slick Mist Pro-2 on the podium in the third spot behind the talented Hart and MacCachren. At the end of the race, Team Associated driver Carl Renezeder was also awarded the “N-Fab Fastest Lap” award, but unfortunately Carl had to retire early from the race due to mechanical issues.

The Pro-Lite class also had some fireworks to show off to the crowd, displaying their improvements from the long off season as well. With the largest field to date, 28 trucks went to battle in hope of being able to stand on the top of the podium. During qualifying, Team Associated’s Cassie Currie piloted his #2 Monster Energy Pro-Lite to the #1 qualifying spot, and pulled a 6 for the invert, giving him a third row starting spot. After the start, it was a free for all battle. Fenders were being torn, mud was being thrown, and the smell of smoke filled the air. Being able to survive the carnage that was happening all around, RJ Anderson, Chris Brandt, and Cassie were able to get a buffer between the field and put on a battle between the three of them. When the checkers dropped, mere feet separated the three of them. Cassie Currie battled hard and grabbed a third place finish and the “N-Fab Fastest Lap” award for turning the fastest time.

As the season comes into full swing, be sure to check out the racing action as it makes its way back into southern California and the unveiling the new Lucas Oil Off Road Racing complex in Lake Elsinore, CA for rounds 3 and 4 on April 21 and 22, 2012. The intensity and heart pounding action is sure to continue throughout the year, as there are still plenty of rounds to battle in hopes of claiming the elite title of “Champion” in the Lucas Oil Off Road Series. We hope to see you all out in Lake Elsinore, and be sure to check out www.rc10.com for more photos, video, and up to the date stories in the world of RC cars and off road racing.