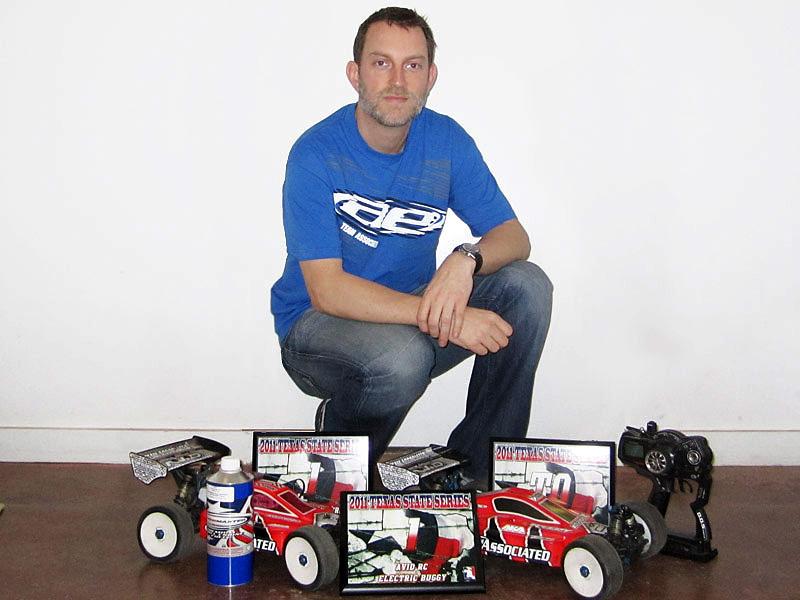 Round 1 of the RC Pro Texas State Series was held this weekend at Mike’s Hobby Shop in Porter, Texas. The Texas series is the largest state series of all the RCP’s and highly competitive. Not to mention it was held at the facility where the finals will be this year for the National Titles! What makes this race interesting is that it is all done in a single day with 17 filled heats.

I (David Joor) got to the track on Friday to practice and make sure my RC8B’s were good to go from the win the previous week at the Icebreaker. The cars were extremely consistent but were not making much mechanical grip on the slick surface, nor was any car, for that matter. I tried going down in oil and in spring but nothing would make the car roll. But the car was so easy to drive that I started off qualifying this way.

I go into the first round, and with a 5-second wreck I was 8 seconds off TQ. Now that doesn’t sound bad but the laps were just a few inches off every pipe. You couldn’t get any closer or faster with the car so I would have expected to be no more then 5 seconds off TQ. I made some changes in the tire compounds and that was the speed I was needing – the car was gripping and ran identical times in electric and nitro with a 12 5:02’s, which was enough to TQ the round in electric but was only good for 2nd in nitro behind Branham, but at least I was only a few seconds behind him this time. With qual points being used (2 out of 3), I had TQ wrapped up in electric and Branham had it wrapped up in nitro. Made another tire combo change and it was the missing link to the perfect setup car. I went on to TQ round 3 in electric and nitro and this time it was 4 seconds faster then any run of the day in nitro buggy, so I knew I had found something here. To top it off, I once again had matching run times in electric and nitro like I did in round 2 (13 5:15’s).

I won the first two A mains in electric wire-to-wire, with some extreme pressure from Jake Dillenger running an RC8Be as well who finished 2nd overall. I just kept my head into it and made no bobbles, which allowed me to stretch the lead out by the 5-minute mark in both mains. I opted to run the third to see how the tires would wear and surprisingly enough they were only .2 a lap slower from the 25-minute mark and on, so I was going to run them in nitro.

At the buzzer it was Branham, myself, and Mike Battaile breaking away from the pack. Branham started pulling a tenths on me here and there and I was pulling a gap on Battaile. My game plan was to win in the pits by going one less pit than Branham and just drive a smooth pace behind him. Unfortunately I was having some issues with a throttle servo which was blipping the throttle open a hair when I would lift for sweepers making it hard to be as tight as I wanted. This gave Branham more of a lead than I had planned and he was on his game. On his first pit he came out a few feet in front of me and for my strategy to work I needed to be in front of him by a few seconds. At this point we had pulled away enough from 3rd so there was no pressure on either of us. I started to put my head down but I just couldn’t match Branham’s pace in order to pass him in the next pit and it would look like he was going to come out in front of me again by a few feet on his second pit at 16 minutes in, when he flamed coming out of pit lane. It was too late then – I drove a calm run after that even, letting Branham by a few times for his frustration management laps. I went on to take the win and ran out of fuel on the last lap but I had almost 2 laps on second so it was all good.

I look more and more forward to running my RC8B’s. This is the most confident I have felt in years with such a balanced vehicle.

Special thanks to David Joor for this report.