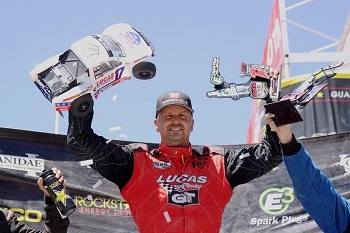 The Lucas Oil Off-Road Racing Series made its way to the prestigious Miller Motorsports Park just outside of Salt Lake City in Tooele, UT for rounds 7 and 8. The points series has been heating up all season and as it reaches the half way point, teams are looking to finish strong in hope of grabbing the championship in their respectable classes.

After a short practice and a 5 minute qualifier on Friday, the fields were set for Saturdays races. Most fans and race teams were watching to see if Team Associated’s own Kyle Leduc could continue his domination in the Pro-4 class and drive his Monster Energy Pro4 to the front and capture his 7th straight win of the season. Kyle’s brother Todd would lead the pack all the way to the competition yellow. With the track now dry and Kyle Leduc limping around with a wounded truck, Todd got a good restart and was able to put some space between himself and Carl Renezeder in the Lucas Oil/ Team Associated #1, but it would not last long. A few laps later, Todd drove too deep into turn one and allowed Carl to sneak the nose in and take over the lead. Carl made the pass stick and never looked back picking up his 98th career short course win.

Sunday morning qualifying, Kyle came out swinging running the fastest time but, would start from the outside of row 3 with the top 6 trucks being inverted. Travis Coyne, starting from the front, lead the field in his #5 Pro Comp/ Team Associated truck for several laps, but was passed by Eric Barron when a mechanical issue caused Travis to fall off pace. A few laps later, a right rear flat forced Carl to pit and give up his position and make the race a three truck brawl. Eric Barron was able to hold off the threat of Kyle and Todd as Kyle found himself with the same suspension issue that hurt him Saturday. Eric picked up his first career win and was followed closely by Kyle in second, and Todd in third.

Later that afternoon, the Pro-2s took to the track and showed why the class is the prestige of the sport. Carl Renezeder was looking to grab his 99th career win, and put a good fight trying to do so. Along with Carl, Team Associated’s Robby Woods unveiled his new truck, hoping that he would be able to put the new truck up front and claim his first career win as well. When the flagman turned them loose, the roar of 15 tucks and thousands of horsepower filled the air and drowned out the screaming fans cheering for their respectable drivers. Carl had a third row starting spot and was in a hurry to get back to the front. Rob MacCachren and Brian Deegan were at the front of the pack and showed why they were champions the past two seasons. Carl did all he could to get his way up to Rob and Brian but, a flat tire would force him to slow his pace. Carl decided to stay on the track and hope that the tire would hold long enough to get him to the checkers. His gamble paid off and Carl was able to get his Lucas Oil/ Team Associated #17 to the finish in third position and pick up his second podium of the weekend.

The teams all head home and begin to prepare for the next race, which will be held at Glen Helen, CA under the lights August 4-5, 2012. If you are going to be in the Southern California area, be sure to you make your way to the track and check out the only night race of the season. Also be sure to check out Lucas Oil Off-road Racing (www.lucasoiloffroad.com) for up to date results, schedule, and news pertaining to the series, along with Team Associated (www.rc10.com) for all your r/c car needs.