The second stop of the JConcepts Indoor National Tour descended upon the popular OC/RC Raceway in beautiful Huntington Beach, CA, and many of the top So Cal pros were in attendance vying for the title of Spring Indoor Champion. Team Associated/Reedy/LRP was in full support as was title sponsor JConcepts with most racers competing on Gold Barcodes. The fluid layout challenged racers to maintain a sharp focus as lap times dipped in to the 16- second range with speeds reaching 30+ mph on the straight-a-way. Combined with the high-grip and low-dust surface, some racers chose to compete on full slick tires while others used a combination of used tires that resembled slicks.

The premier class of the event was 2WD Modified. With a stacked field including the current ROAR National Champion and other full factory-sponsored racers, qualifying was close to make the triple A mains. Team Associated/Reedy/LRP’s Josh Numan proved to be the class of the field. Patiently stalking Mike Truhe for the first two A mains and claiming the prestigious 2WD Modified title with his Factory Team B4.1. Numan also took his Factory Team B44.1 to the winner’s circle in 4WD Modified for a nice double victory and Team Associated’s 1st and 2nd of the event.

Making his 4WD Short Course debut with the SC10 4×4, Team Associated/Reedy/LRP/JConcepts’ Jason Ruona showed his versatility by earning Top Qualifying honors in “Pro 4.” Ruona delivered on his TQ by leading every lap of the 10-minute main event taking the 3rd victory for Team Associated, just ahead of teammate Chris Jarosz. When asked about driving the SC10 4×4, Ruona had only one word, “Dialed!”

Team Associated/Reedy/LRP driver Nick Wautlet, an employee of OC/RC, was the dominant force in the 17.5 Short Course and 17.5 2WD classes with his Factory Team SC10 and B4.1. Wautlet TQ’d and won both classes at his home track, claiming victory 4 and 5 for Team Associated.

All in all, the seven wins at one event were quite impressive for the Team, and with two more rounds left of the JConcepts Indoor National tour, it sure won’t be the last. Look for Team Associated/Reedy/LRP representatives Brent Thielke, Jason Ruona, Tanner Denney, and others to continue the four-race series with the next stop in Northern California at Outback Raceway. 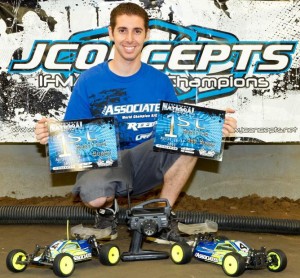