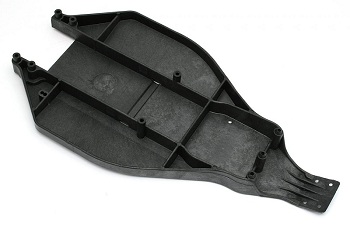 We spotted this chassis recently on a trip to Team Associated’s office and now they have officially released it to the general public.  This chassis was used by Factory Team driver Ryan Cavalieri to capture the 2011 IFMAR 2WD World Championship and will increase stability in your buggy. Read the official press release below for more info:

Team Associated debuted the new +8mm chassis in prototype form at the 2011 I.F.M.A.R. World Championships with stunning results, taking the World Championship title, TQ honors, and the top two steps on the podium!

Now, racers world-wide can upgrade their B4 or B4.1 to the latest specs with the new B4 +8mm Conversion Kit. The additional 8mm of added wheelbase helps make the B4 easier to drive and more stable without sacrificing the critical traction needed for lower-grip tracks.

Fits B4 FT, B4.1 FT, and B4 RS RTR. Body required. Some bodies may fit the longer chassis with little or no modification. Racers can purchase a +8mm B4 body from our racing partners Pro-Line and JConcepts. Bodies made for the B4 +8mm chassis are: