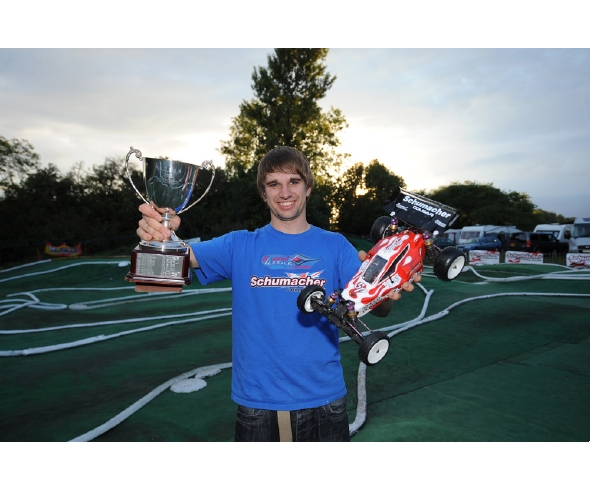 In its debut season the Schumacher Cougar SV has won the BRCA British 2WD Off Road Championship!!!

Congratulations to Tom Cockerill who secured the title at the last round of the series at the Stotfold track this weekend. In spite of having an off day and only making the B final Tom’s main championship contenders failed to improve on their points scores so Tom watched on and won the championship from his marshalling post!!

However the Cougar SV was working extremely well on the wet slippery track, 5 Cougar SV’s made the final. With Simon Moss finishing an excellent 3rd and congratulations to Dave Poulter and Lloyd Storey who both made their first national A finals with the Cougar SV. Grant Williams and Jonathan Palmer rounded out the 5 cars in the A, in what was an excellent team performanceTom’s championship winning car was powered by Speed Passion V3 motors, GT2.0 Pro ESC and Speed Power lipo’s.

Congratulations to Tom and the rest of the team for a great debut season with the car.

Thanks to oOple for the photo’s.