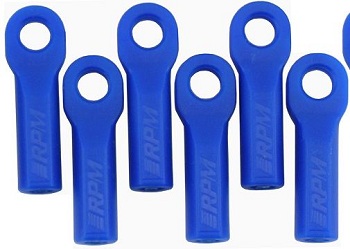 RPM Rod Ends for Associated and Losi vehicles have been some our best selling RPM parts for over 2 decades! That same engineering, combined with RPM bulletproof materials, has gone into the creation of RPM Rod Ends for Traxxas 1/10th scale vehicles. These rod ends are tough! The area around the ball stud is thicker than the stock rod end while still allowing a full range of motion of the pivot ball. Additionally, the shank has been redesigned with a pair of flats, making the rod end much easier to work with (versus the stock, round shank). RPM rod ends are sold in sets of twelve to complete most vehicle needs.