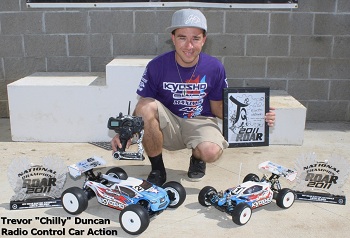 The finals for the 2011 ROAR 1/8 Electric Off-Road Nationals were held Sunday at the HobbyTown USA HobbyPlex in Omaha, NE.  Kyosho pilot Jared Tebo swept the ROAR 1/8 Fuel Off-Road Nationals last year in Colorado Springs, CO and he has done it again, but this time on the electric side.

In the Pro 1/8 Electric Truggy class Team Losi Racing driver Mike Truhe set the TQ pace with Tebo qualifying second.  In the 1st leg of the triple A 10 minute mains Truhe wrecked on the 1st lap which allowed Tebo to slip into first place and he never looked back as he led the rest of the race.  In the second A main Truhe got out to the early lead but at about the three minute mark he ran into a lap traffic pileup in the middle of the infield which gave Tebo an opening for the lead.  Tebo continued to lead as Truhe kept up pace right behind him.  But with less than three minutes to go Truhe stripped out a spur gear and Tebo cruised his way to his first national title that weekend.

Tebo was the TQ coming into the Pro 1/8 Electric Buggy class and in A1 he fought off a hard charge from Team Associated driver Ryan Maifield to take the win.  In A2 he and Maifield battled once again but Tebo had slightly pulled away to build about a three second lead.  However, on the last lap Tebo made a mistake and got hung up on the pipe allowing Maifield to cross the line first.  So it came down to A3 and once again Tebo and Maifield duked it out for the national title.  Tebo built a comfortable lead again but Maifield started to click off some fast laps and with 2 minutes to go he was right on Tebo’s wing.  A small mistake by Tebo allowed Maifield to take the lead as they sprinted down the backstretch.  As they came around the infield in front of the driver’s stand Maifield caught a pipe which allowed Tebo to take back the lead.  But Maifield was still within striking distance and continued to look for a way around Tebo.  With the loop just past the straight away the two drivers sprinted to the finish line and Tebo was able to cross the loop one second ahead of Maifield giving Tebo his second title that weekend.

Right behind the loop was a table top jump and Tebo had so much speed that he aired it out over the jump and landed off the front side of the announcer’s booth.  This was the first race in the HobbyPlex’s new 15,000 square foot building and the impact actually left a small dent.  Race director Alex Sturgeon had Tebo leave his John Hancock right next to the small impact to mark the occasion.  So it was an exciting finish to a great weekend of racing and an awesome way to break in the new facility.  And since Sunday was the 10th anniversary of 9/11 it only seemed fitting that a driver with a red, white, and blue paint scheme would take home both U.S. titles.