The legend returns! After a 25-year hiatus, Ford is debuting an all-new Bronco this year. The sixth generation mid-size SUV was conceived to rival Jeep’s perennial off road darling, the Wrangler. The burgeoning rivalry is exciting news for real world off road drivers, overlanders and rock crawlers alike. Many in the RC world, including us, are chomping at the bit to carry on the Bronco versus Wrangler rivalry into the 1/10-scale world.

To say that the return of the Bronco nameplate to Ford’s vehicle line-up is highly anticipated can be considered a tremendous understatement. The excitement in the truck enthusiast and off road communities has reached a fever pitch for the all-new go anywhere truck. Sensing the hysteria that the 4×4 was generating, Traxxas went ahead and beat out the others to the punch by brining the 2021 Ford Bronco to life as a 1/10-scale RC off roader.

Based on the familiar Traxxas TRX-4 platform, the scaled-down well-detailed 2021 Ford Bronco body lends an entirely new look and feel to the acclaimed chassis. In fact, this is arguably the most scale detailed TRX-4 body that Traxxas has ever released for the TRX-4 line-up. Being one of the most important releases that Ford has had in recent years, it says a lot that Ford itself has placed its stamp of approval on this accurate RC recreation. The Bronco is certainly a handsome design, we’re glad that it gets the scale treatment that it deserves. 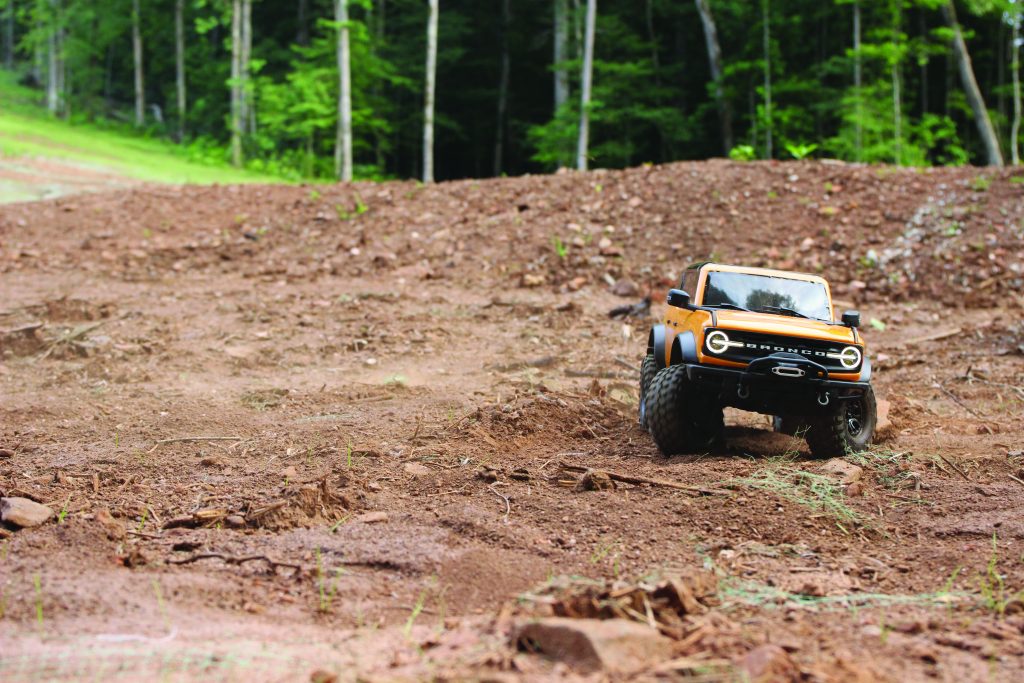 On the hood where it meets the front fenders, you’ll find scaled down “trail sights,” just as you would on the real Bronco. Ford has placed trail sights on each corner of the Bronco’s hood, which are used to help the driver see each corner on the front of the vehicle while maneuvering through technical off-road trails. These trail sights extend and meet up at an LED-ready grille. On the very front of the Bronco, you’ll notice replica bumpers that feature a fairlead for an optional winch. Also located on the bumper are tow hooks and a receiver hitch at the rear.

Keeping things looking as scale as possible, you’ll notice that the Bronco is free of body posts and pins. Traxxas is implementing a clipless body mounting system in their latest releases and luckily for us, the Bronco receives this treatment too. Gone are clumsy body clips and posts in favor of a much better looking, easier to mount and dismount clipless system. (You can read more about this tech in this issue’s Test Bench found later on in this issue.) The hidden quick-release system provides a sturdy hold on the body yet can be released and then locked back in in seconds.

We’re big fans of this feature. What we also appreciate is the TRX-4’s molded inner fenders and factory stock rock sliders as both elements add to the overall scale realism of the Bronco. All in all, the SUV looks tremendous right out of the box.

Like other Traxxas RTR kits, the Bronco is a fully ready to run model that only requires batteries and a charger to get going. The proven steel ladder frame TRX-4 chassis features high-clearance portal axles that allow it to easily crawl over tall obstacles that would stop other trucks in their path. When compared to regular straight axle equipped vehicles, these portals allow for an extra inch of clearance. Another bonus to the portal set up is the virtual elimination of torque twist. Gear reduction at the wheels translate the 550 motor’s torque into a straight, forward motion, rather than a twisting energy that sends your truck wayward off the rocks. 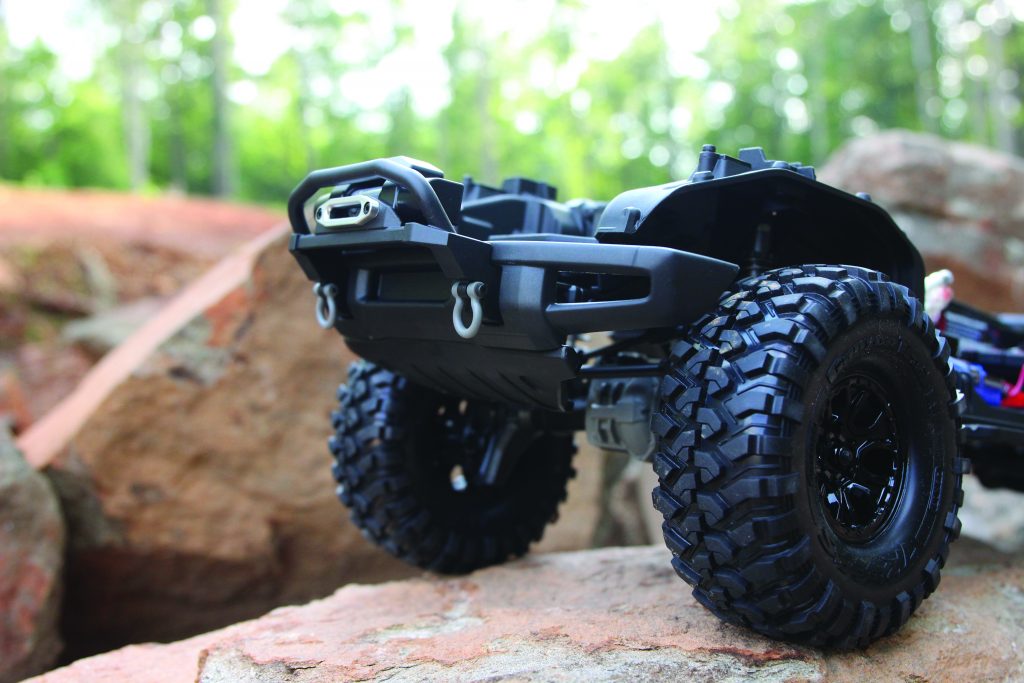 Traxxas Canyon Trail 1.9 tires give the Bronco plenty of grip where it needs it the most. 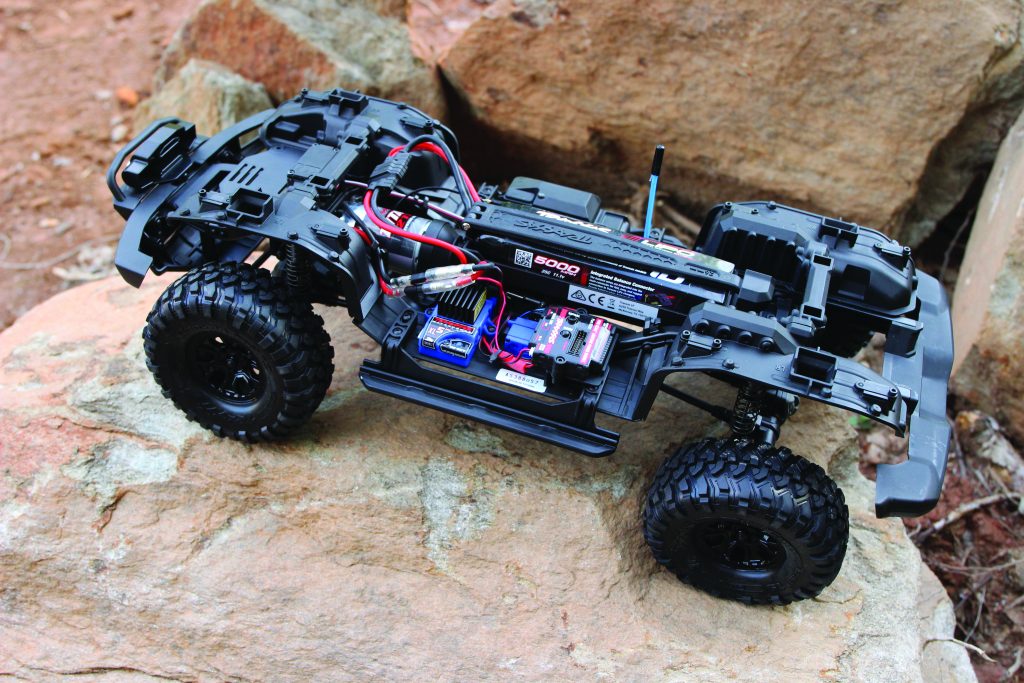 Eagle-eyed enthusiasts will note that the Bronco features aluminum GTS shocks. The threaded aluminum shock bodies of the GTS units deliver smooth dampening and allow for easy ride height adjustments. It is also equipped with a TQi radio transmitter system that can activate its T-lock differentials remotely. Also switched on the fly via the transmitter is a two-speed transmission. Go high between trails and flip a switch to get into low gear when looking to gain massive traction when negotiating rough terrain.

To properly match is life-size cousin; the TRX-4 version of the Bronco is powered by a reliable Traxxas 3s power system. Its XL-5 HV speed controller can handle up to 3s LiPo battery power to fuel its Titan 21T 550-size motor. This combination is rated to power the Bronco for up to a full two-hours with a 5,000 mAh capacity battery.

There are plenty of upgrades already available for the Bronco including LED lighting that will give the 4×4 front and rear lights with brake, turn signal and reverse light capabilities. We installed the Bronco’s Pro Scale LED kit and were delighted at the extra scale look that it provided. The kit even has hazard light functionality and the turn signals that auto-cancel just like on a real vehicle. It’s really something to behold, especially when you’re driving it around. An optional functional Pro Scale Winch made by Traxxas has also been recently released. That’s an accessory that is certainly on our want list. 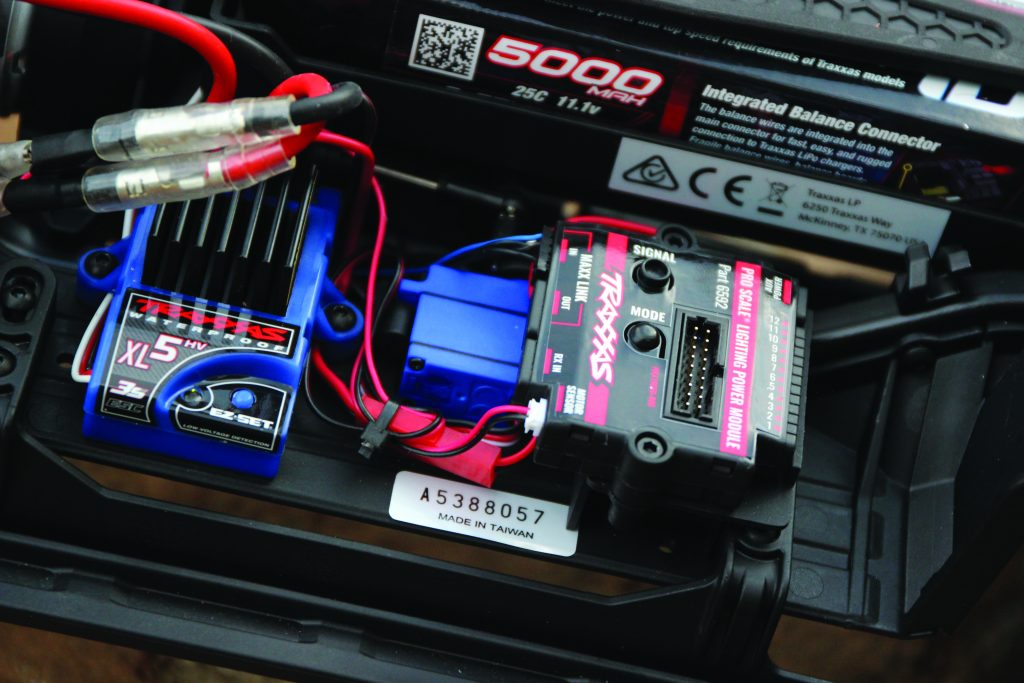 The Bronco is equipped with a host of waterproof elecronics including a XL-5 HV speed controller. An optional Pro Scale Lighting module has been installed onto this example.

After admiring the beauty of the Bronco and taking a mental picture of how we intend on mod it out, we decided to take it out to the tails in its stock form. Like other TRX-4 releases, we found the SUV to be extremely competent and easy to drive on most paths and trails that we encountered at the park. To put it simply, the TRX-4 is a fun vehicle to drive. Its inherent capabilities really put amongst the best RTR crawlers out there. The capabilities it’s armed with such as portal axles, switchable transmission gearing and lockable front and rear diffs make driving the TRX-4 in most any situation a breeze. That said, if you intend on taking the Bronco to a double black diamond trail, you’d probably want to make some mods to get the most out of the platform.

We also have the Traxxas release of the 1979 Ford Bronco, which also rides on the TRX-4 chassis, and for some reason, we found that this 2021 version didn’t tackle the trails just quite the same. Perhaps its heavier body made it a bit top heavy, but overall we were willing to sacrifice the out of the box performance for it’s out of the box great scale looks. We can always adjust the suspension to suit the terrain. 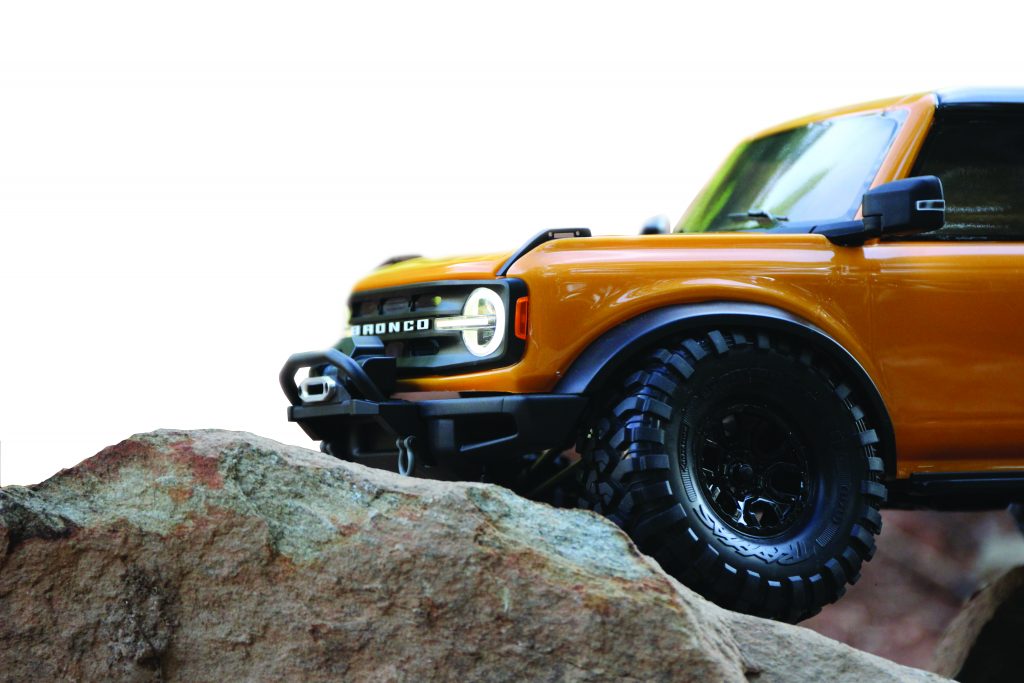 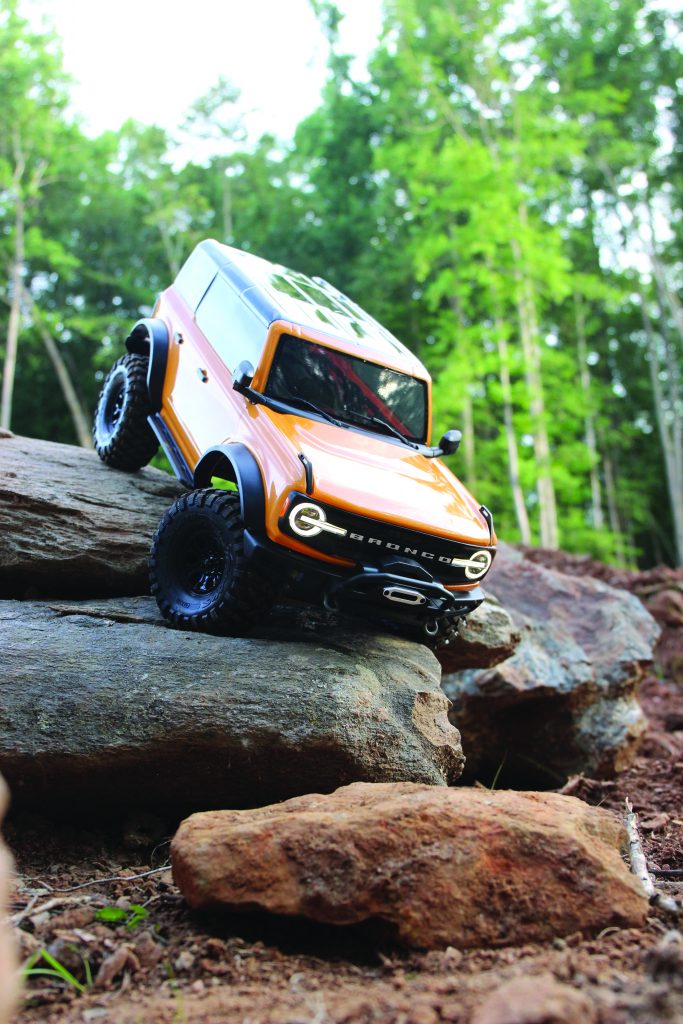 The real-life Ford Bronco may be the SUV that everybody is clamoring over, but we’re just as jazzed on its scale cousin. Traxxas is making an effort on improving the scale details of their vehicles and it shows and this 2021 Bronco is certainly an exciting addition to the TRX-4 line up. For a ready to run model that recreates the look and off road prowess of the newest Ford, we’d say that the team at Traxxas has delivered on a vehicle that continues the Bronco legend. 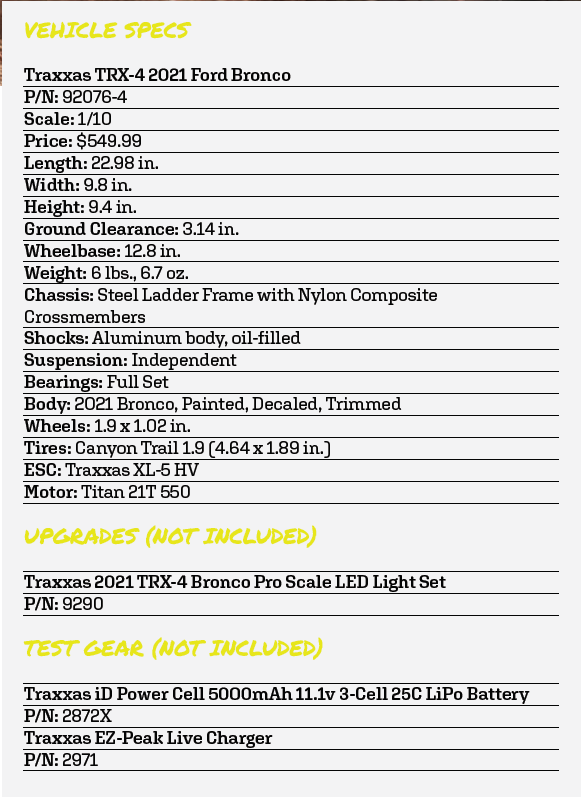