Every build has a backstory; maybe it’s inspired by a real car that the builder saw on a racetrack once or perhaps it’s built to replicate a dream car. The backstory can be as fascinating as the build itself sometimes. As for the car you’re looking at now, the story begins a long time ago. Buckle up because you’re about to ride along and learn the story of how this creation came to be.

Growing up in an automotive household and having a cousin who builds full-scale custom street and drag cars, Leigh Guarnieri was bit by the race car bug at an early age. His cousin Rocco DeAngelis, owner of the speed shop Mild to Wild in Milford, Connecticut, has been building go fast street cars for over 30 years.

In the early days of the shop, there was a Chevy Nova that seemed to always be the test mule for ride-alongs. Getting to ride in a real-life muscle car that would regularly rumble his insides made a deep impression in him. Serving as his inspiration, Guarnieri embarked on creating an RC drag car that would harken back his childhood experiences riding in the Nova.

Now the father of a five-year-old daughter, Guarnieri wanted to share his love for both radio controlled cars and the Nova from his childhood with her. He thought, what better way than to build an entry-level custom build to have her drive and build along with him? Guarnieri adds, “Every time you hand a kid a controller, they immediately pull the trigger to full speed. With that in mind, it seemed logical that a dragster for her was in order.”

REFLEX DB10
Already the owner of a Team Associated Reflex DB10, Guarnieri figured that he could use it as a base for a dragster build. The versatile DB10 has been used by Guarnieri as a basher, race vehicle, sand buggy and now it will become a drag racer. Last used to romp around the sand, the vehicle clearly showed signs of use on it. After a good cleaning and a fresh set of bearings from RC Screws, it was ready for the transformation.

Early on Guarnieri zeroed in on using Pro-Line Racing’s 1969 Nova body for this build. With that in mind, he knew that he would have to narrow up the width of the DB10 to properly fit the body. Reaching out to John Schutz, brand ambassador for Team Associated, he filled Guarnieri in on what parts were needed to make it happen. He used Team Associated’s B5 hard rear A-arms, B5 flat front arms as well as Team Associated 65mm dog bones, also from the B5. Team Associated makes B5 turnbuckles as well but the local hobby shop happened to have a set of B5 titanium turnbuckles from Lundsford in stock so he grabbed those instead. The DB10’s stock gearbox comes with a heavy-duty sealed-gear differential and externally adjustable V2 slipper clutch so you can adjust to traction easily based on conditions. He liked the unit and decided to leave it untouched. 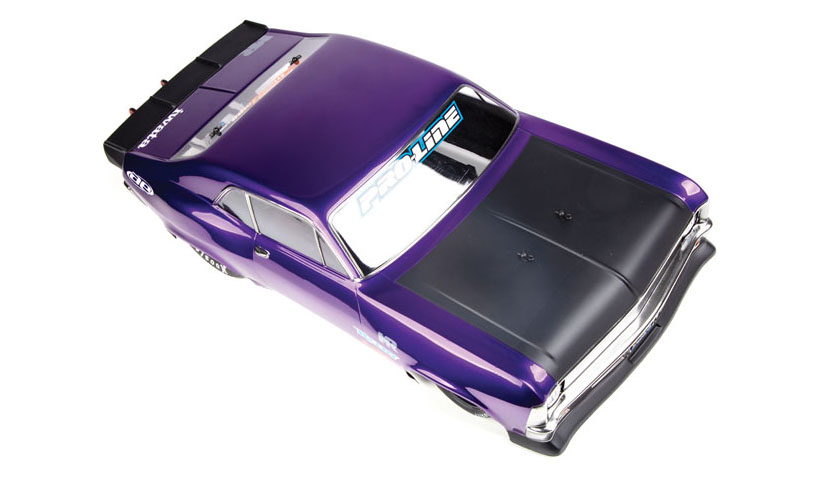 The Reedy Electronics 3300kV brushless motor and waterproof ESC that come with the DB10 are great and bulletproof for an RTR so he left them installed as well. He did bump the pinion up a few teeth and made sure he had a capable battery to match. By opting for a MaxAmps 2s 6500mAh true 150C LiPo, the set up could handle the draw and also provide enough capacity for a long day of uninterrupted runs.

Team Associated supplies a very user-friendly transmitter with the DB10 that’s got plenty of adjustability. But knowing that kids like to turn knobs, Leigh swapped the stock radio for a Futaba 3PV transmitter and the Futaba R324SBS 4-channel receiver. Its an upgrade for sure and without exposed knobs, he thought there would be less chance for his daughter to accidentally change settings. The stock servo worked great and was left in place. 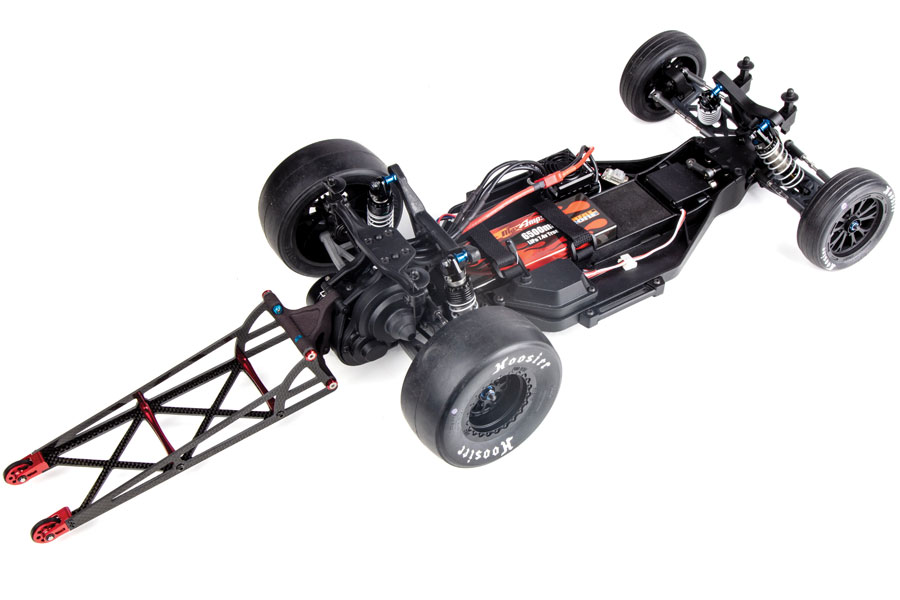 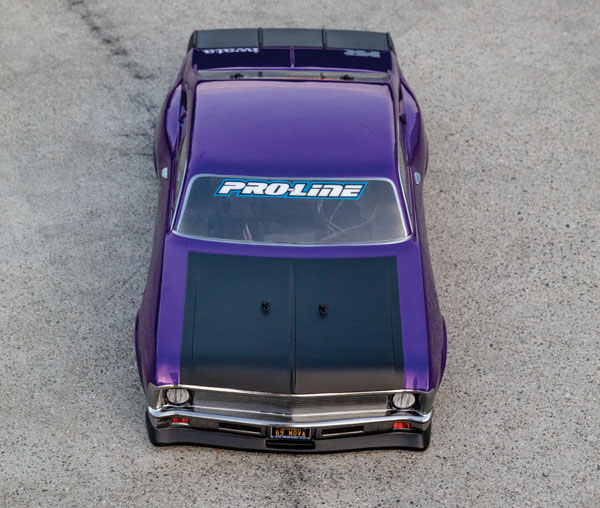 Since there are not many bolt-on wheelie bar options available, Guarnieri reached out to Ken Lupi at Drag Race Concepts (DRC) to get some solutions. Lupi suggested that one of the wheelie bars he makes could work for the DB10 set up if an adapter was used. Guarnieri then spoke to Tyler Zavadil at RC Drag Talk who informed him that a DRC adjustable wheelie bar could be mounted to the DB10 by using a 3D-printed mount from Shapeways. He ordered one up and reports that, “It looks sweet and functions as it should by allowing the wheelie bar to stay low and straight.”

The Reflex DB10 has a lot of travel since it was originally designed as an off-road buggy so Guarnieri installed some Pro-Line Powerstroke front shocks in the front and back using fuel tubing as limiters inside the shock body. Guarnieri explains, “Sticking fuel tubing over the shock shafts inside the shock body let us get the correct suspension height by limiting its movement. This allowed the car to still be within the Street Eliminator rules of using four shocks.”

Now that the chassis was squared away, it was time to move on to the looks of the drag car. Guarnieri went ahead and mounted up Pro-Line Racing Hoosier drag slicks on Pro-Line Racing Pomona Drag spec rims. Being that it was winter when he built the car, he opted for the soft compound to help out with grip.

As mentioned earlier, Guarnieri opted for a Pro-Line Racing Nova body of which he says, “It’s awesome, the looks and lines are very realistic. I asked my kid what color she wanted the car painted in and just like that, Pro-Line Purple was chosen.” The body was sent out to Matt at MR Custom Painting with no direction other than to use the color purple. He whipped up a sleeper for sure. Having some fun with the body, Matt freehanded the applied logos and also added chrome bumpers and grill to keep the street car look. Matt also painted the hood on the outside with a Flat Black giving it a great two-tone scheme. 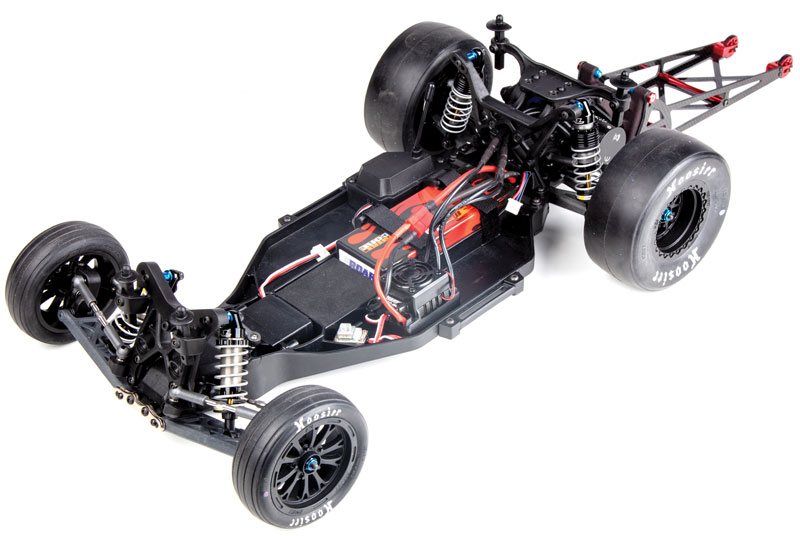 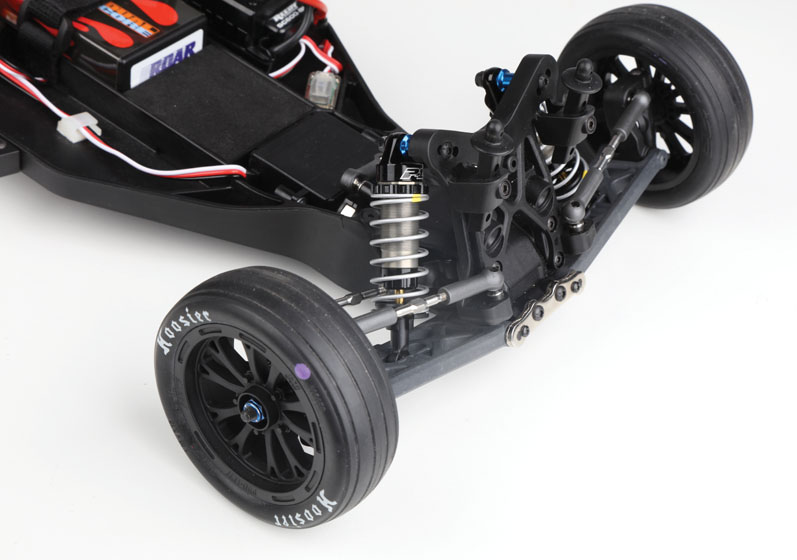 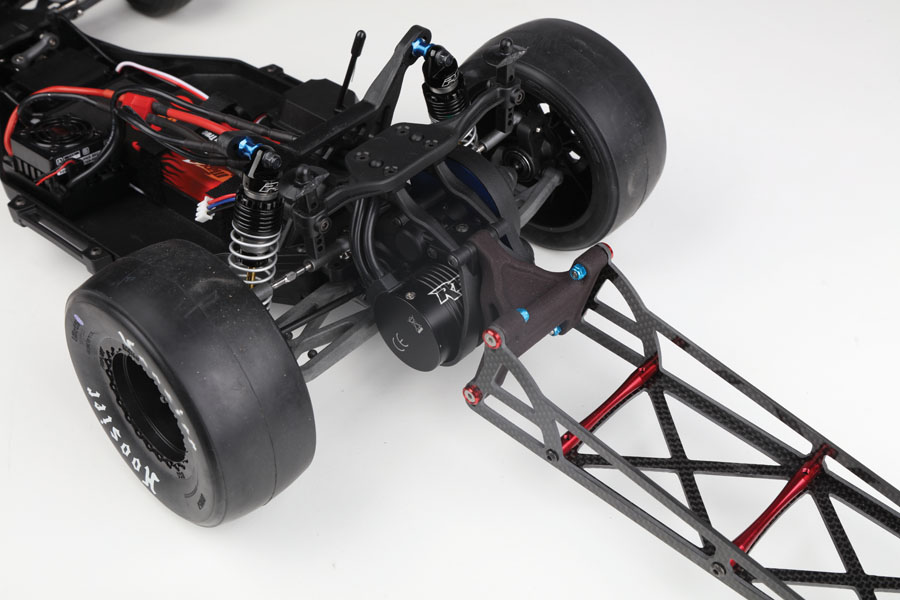 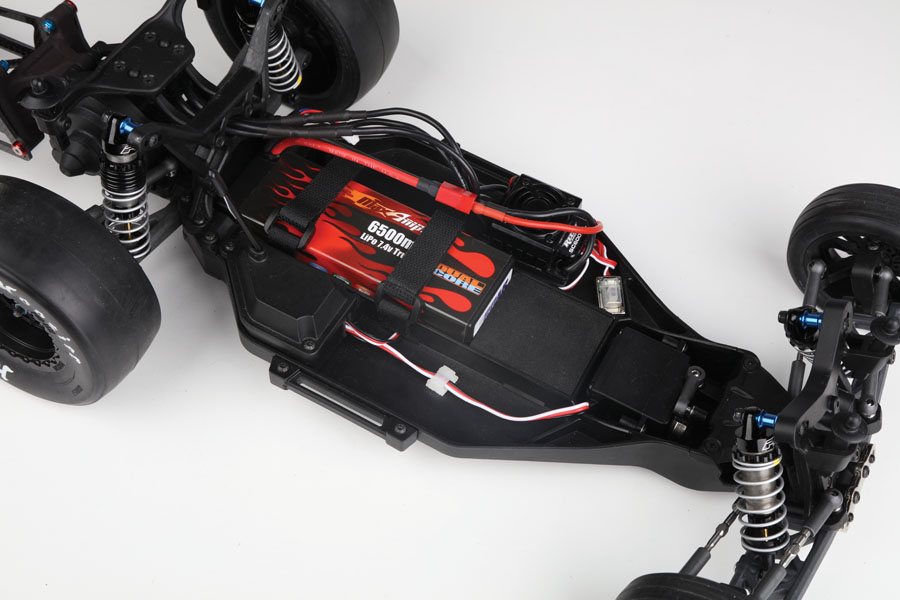 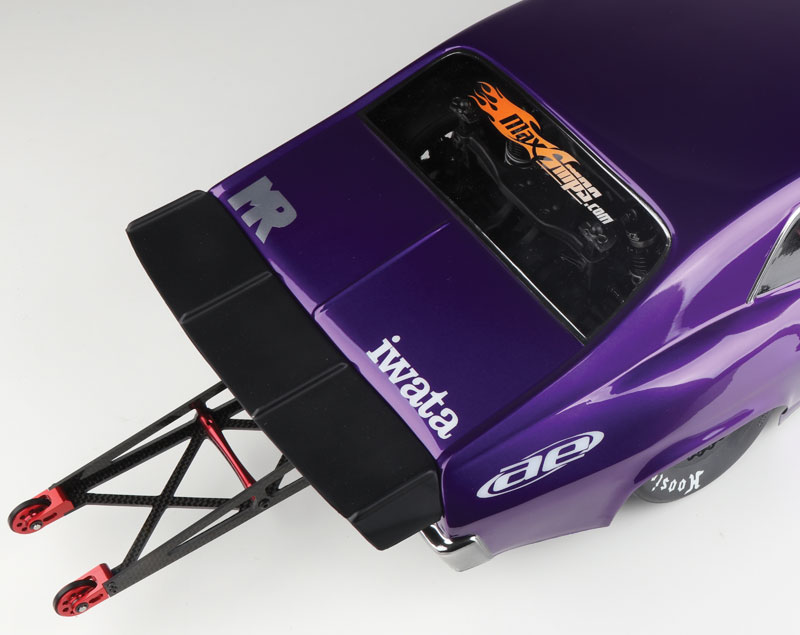 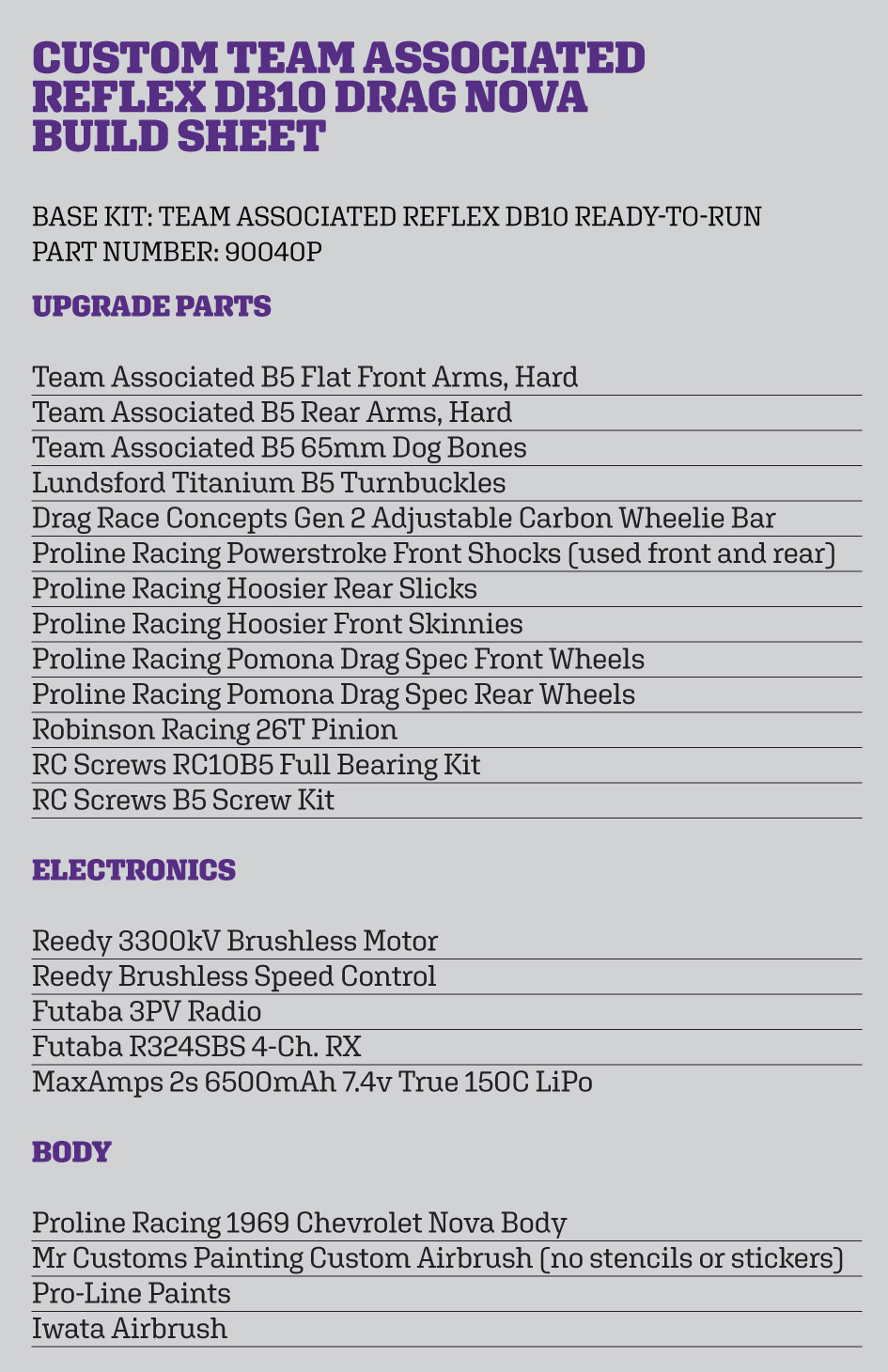 With the body mounted and car finally complete, all he needs is to take it out for a few shake down passes and tuning sessions at a nearby parking lot before he and his daughter head to the local RC drag strip for some serious racing. His five year old is excited to get behind the transmitter to slam that trigger home. Reminded how excited he was to ride in a Nova when he was a kid, Guarnieri can’t wait either.