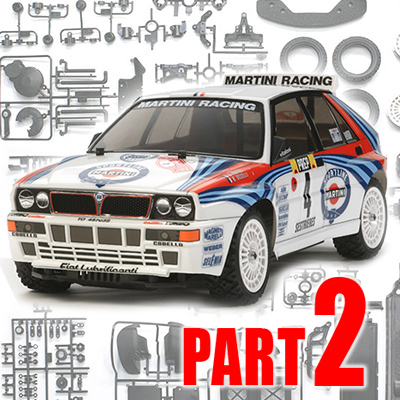 Now that we’ve seen what’s in the box, let’s get down to business and start spinning screwdrivers on the Tamiya XV-01 Lancia Delta Integrale.

As is the case with many Tamiya models, assembly begins with the differentials. The XV-01’s gear diffs are a departure from most 1/10 scale Tamiya models in that they are sealed (via o-rings on the output shafts and a gasket between the case halves), and  because their internal gears are plastic–not the familiar metal parts we’ve seen on so many Tamiya kits before. How will they hold up? We’ll see. The parts fit together well and the silicone-filled diffs are leak-free once assembled. The 2x8mm screws that clamp the diff cases shut were a bit of a chore to tighten, however. My MIP 1.5mm driver didn’t quite fit properly, nor did the included 1.5mm “L” wrench. Both were just slightly too big, and barely engaged the fastener’s socket. Much pressure while turning the screws was required to keep the driver engaged, but I got ’em in. 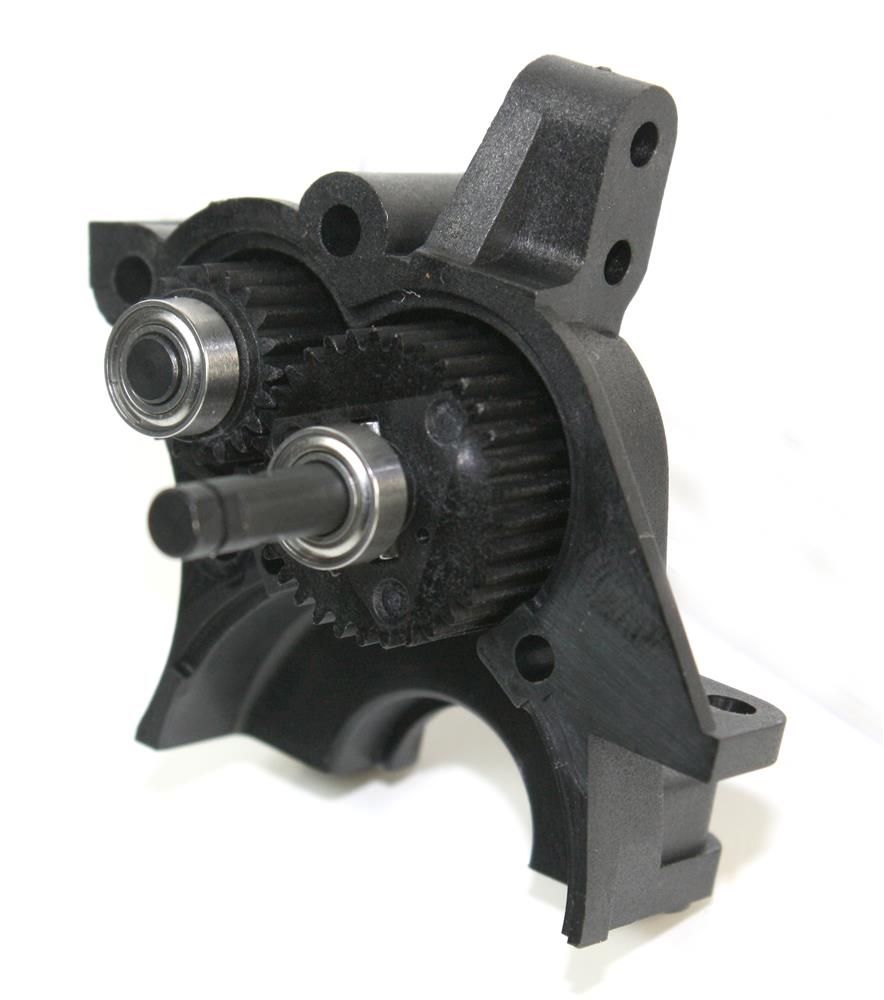 The front gearbox goes together next. The smaller top gear is the input gear, while the larger gear’s long shaft protrudes from the gearbox to accept a pulley. 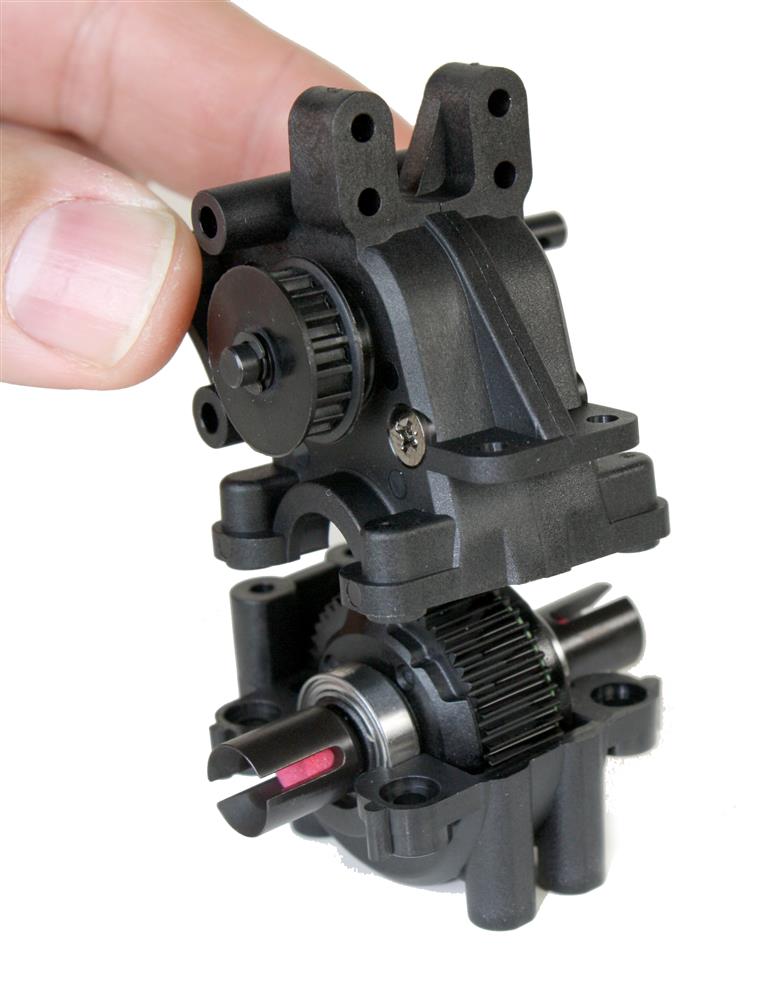 Here’s the fully assembled upper gearbox with the aforementioned pulley. The lower gearbox is one piece and the diff is sandwiched between the upper and lower halves. Sponge pucks in the outdrives pad the ends of the dogbones that will be installed later. 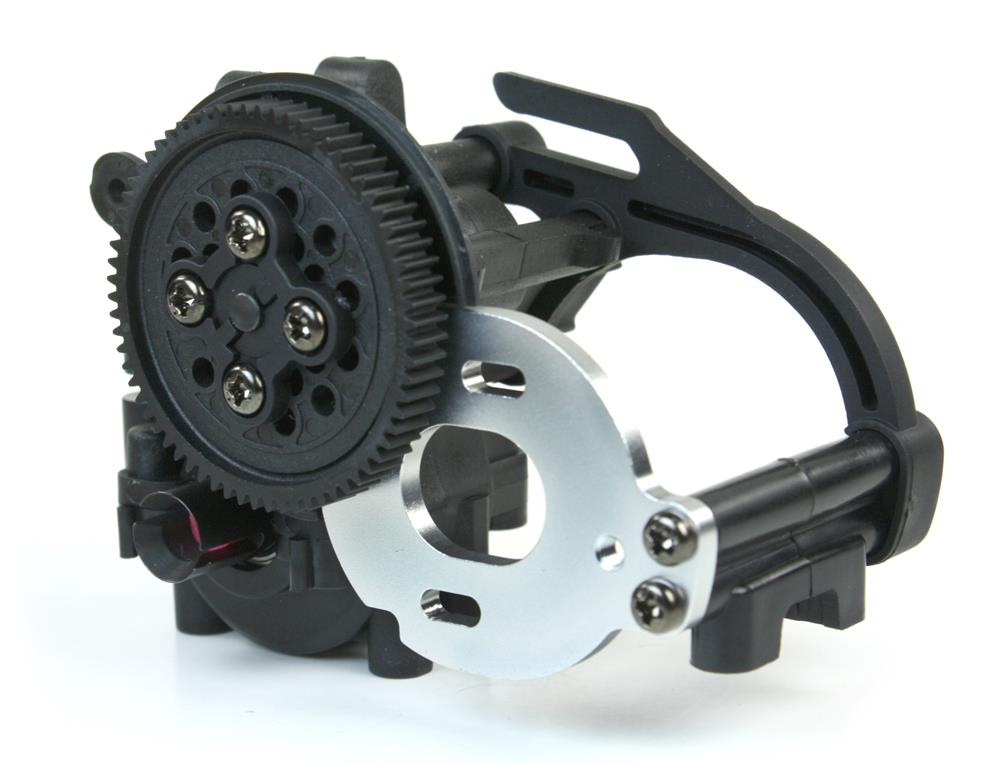 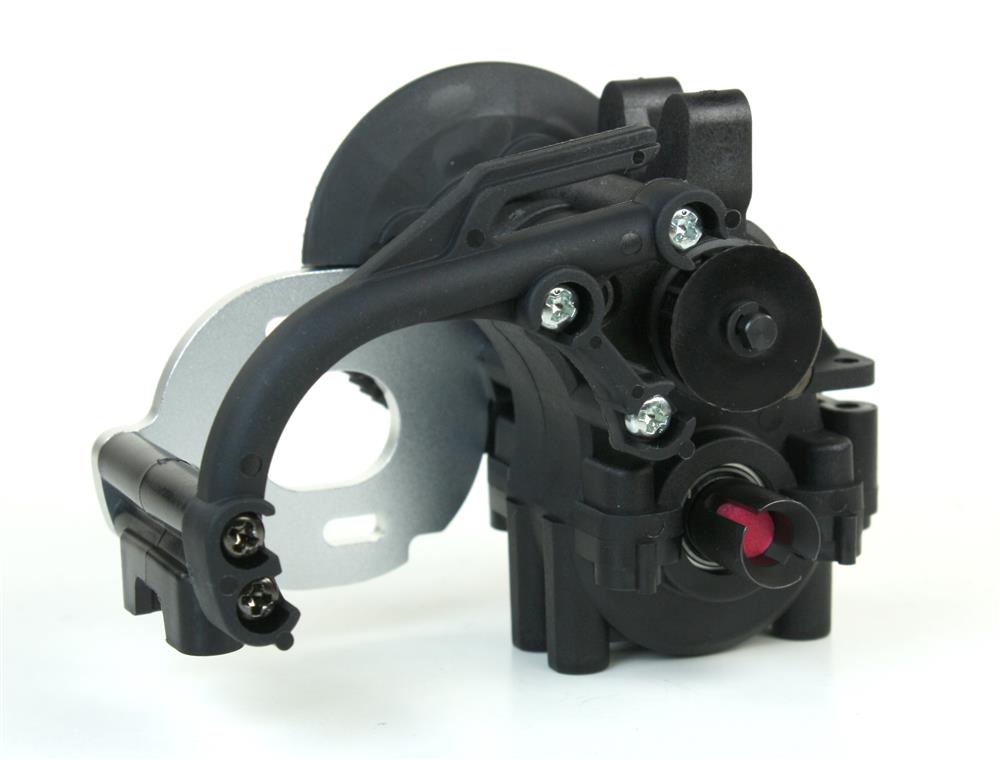 Here’s the reverse side, with drive pulley for the belt that will spin the rear gearbox. 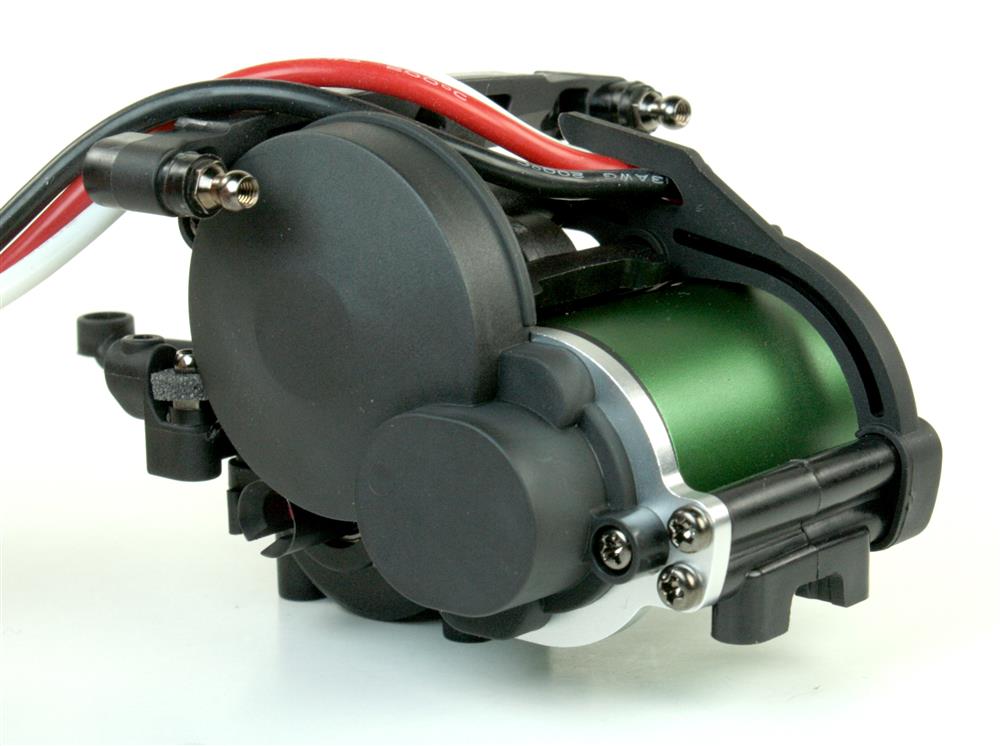 Motor installed. Tamiya includes their traditional 540 closed-endbell stocker, but I’m opting for a Castle Creations Sidewinder 3 setup with 5700KV motor (if you’re interested, you can read my review of the system here). Note the wire guide built into the assembly–nice touch. 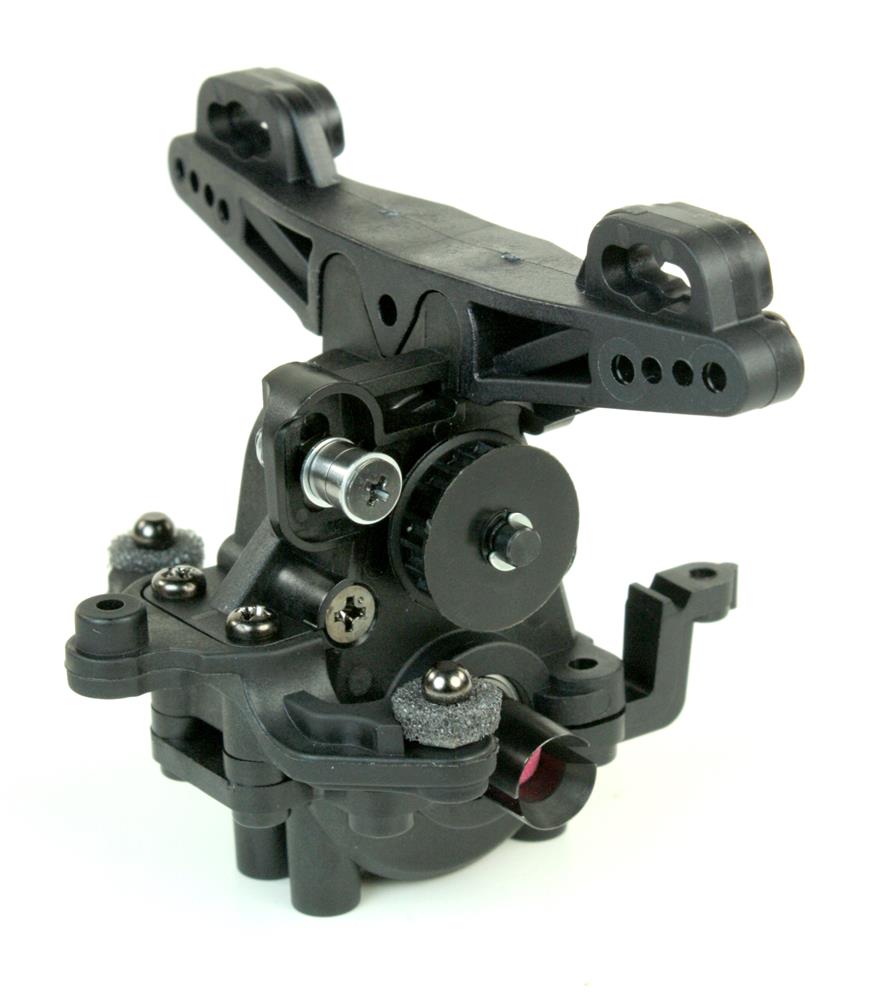 The rear gearbox goes together much like the first, but has just two gears: the pulley-equipped input gear and the differential. It also wears a belt tensioner. Note the foam gaskets on the ball studs, which are there to help keep dirt out of the camber link’s ball cups. 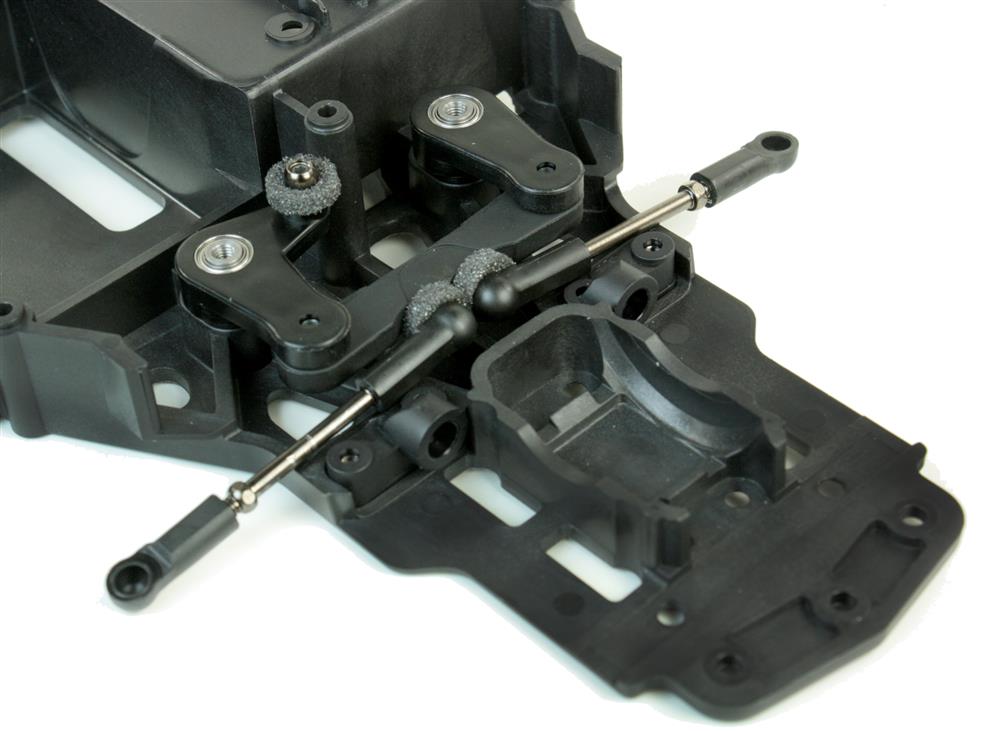 On to the steering assembly. A pair of bellcranks do the job, each supported by a pair of ball bearings. There are bearings in the steering bar as well. Just beneath the steering tie rods are the sockets for the front suspension arms’ hingepins. Shims are provided to alter the height of the sockets, and thus hingepin angle. I can guarantee you I’ll never exploit this feature, but I like it… 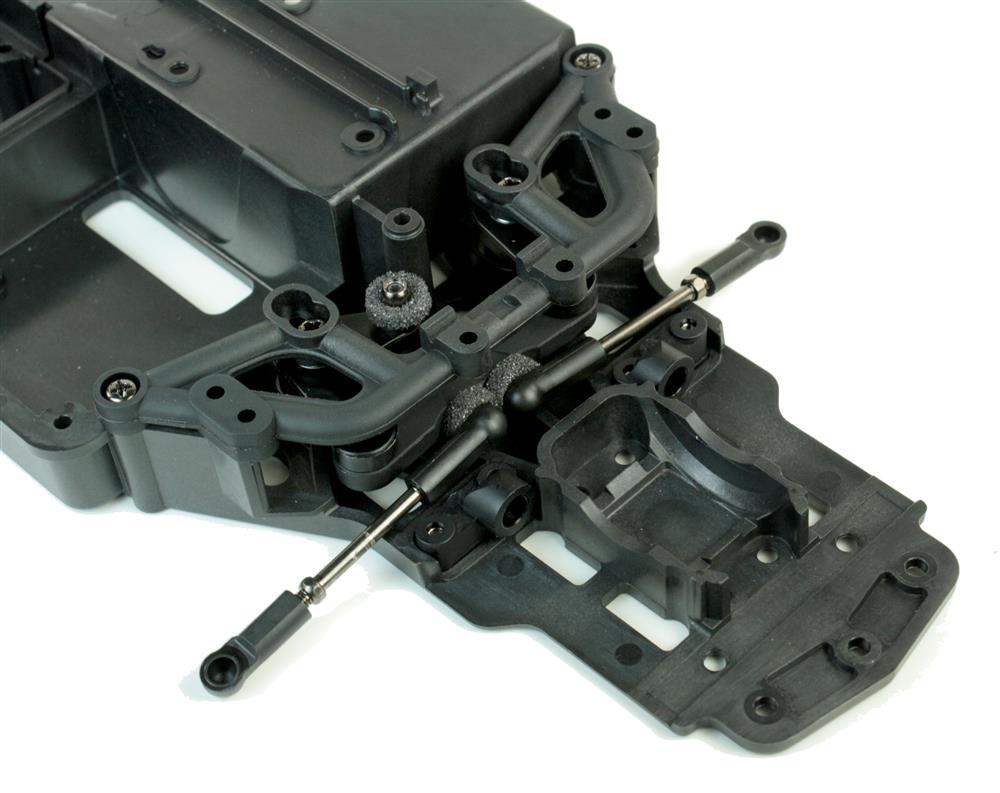 A chassis brace caps the bellcrank assembly…and that’s all I’ve got for today. I’ll be back at it tomorrow!