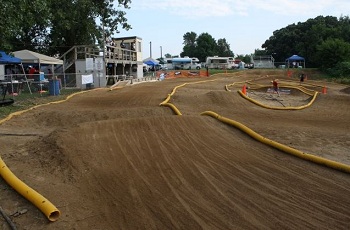 I made my way over to Fort Dodge, IA this past weekend for the inaugural Midwest Short Course Nationals held at the Fort Dodge RC Offroad Raceway, http://www.fortdodgerc.com/.  Some of the Midwest’s fastest short course drivers battled the intense heat and each other this last Saturday.  The track is located at the Webster County Fairgrounds and the county fair was also going on that weekend so there was plenty to see and do between rounds.  The temperature was in the upper 90’s and once you factored in all the humidity it felt like 110 degrees, even in the shade.  Due to the heat the race program was modified for the driver’s safety and we ran 3 qualifiers and single A mains instead of 4 rounds of qualifying and AAA mains.   There were 4 titles up for grab that weekend in the Novice, 2WD Stock, 2WD Modified, and 4WD Modified classes.  Thanks to the race’s many generous sponsors there was a ton of giveaways to hand out and everyone left the track with something.  By far the best prize you could win that day was a t-shirt since after a few hours in the sun you needed a new dry one.  🙂

After the mains were all in the books, the racers got together for a dash 4 cash race with no marshals to see who could run 5 laps 1st without crashing to take home the big money. But by far the best race to watch this weekend was the kid’s Hillbilly run were all the young drivers ran 1 lap around the track on foot.  Check out the video of it below!