Depending on whom you ask, the golden years of RC can arguably be nailed down to the era when RC vehicles were being raced, developed and manufactured at a breathtaking pace. During the 1980s through the 1990s an RC arms race so to speak helped usher in developments in design, materials, electronics, motors and also gave birth to some of the most iconic names in the industry.

Casual hobbyists, professional designers, engineers, racers and even garage tinkerers from all over the world were getting into and further developing the hobby to how we recognize it today. Growing along with the bourgeoning RC industry were the young minds that were influenced by what they saw.

One such person was Nigel Villeneuve Ratcliffe. Hailing from Glasgow, Scotland, Ratcliffe is a professional car designer that has been into RC-ing since he was only nine years old. He was so into RC that we can’t help but think that his choice of profession was influenced by it or at least helped point him down the path towards it. The Exterior Design Manager at Bentley Motors knows a thing or two about vintage RC since he’s been driving and working on them well before they were considered vintage. 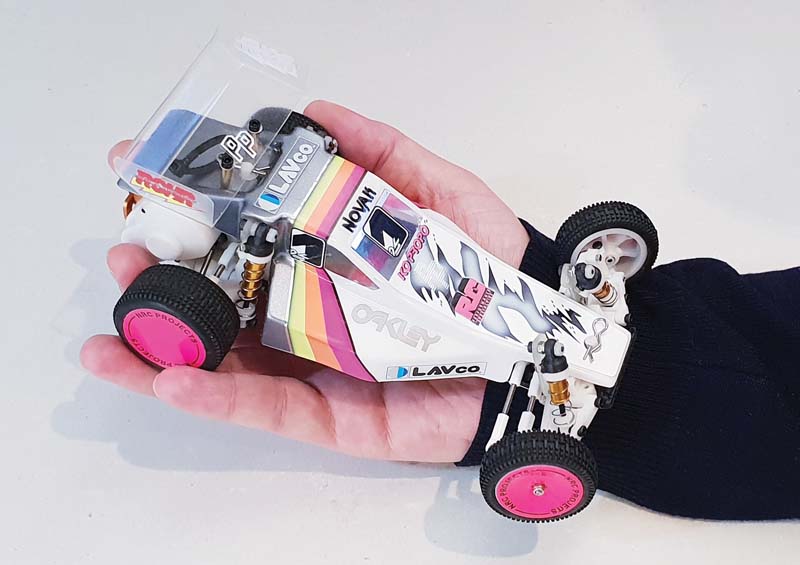 Ratcliffe’s first hobby grade RC vehicle was a Kyosho Optima Mid Custom and he counts a fine collection of 80s and 90s greats such as Yokomo Works ’92, RC10 Championship Edition, Traxxas TRX1, Losi Micro-T, Losi Mini-T, Losi Jrx-Pro SE as some of his all-time favorite RC cars.
We got to speak to Ratcliffe about his pet project, a small-batch company he named NRC Projects. NRC Projects specializes in creating replicas of iconic RC vehicles of the past with a tiny twist. Some readers may already recognize that name as the group behind some really cool micro-sized builds. NRC has produced a truly remarkable 1/32-scale replica of the RC10 as well as a version of the YZ10 in 1/24-scale.

The vehicles are made in very limited numbers out of a cottage industry that includes in-house 3D printing and vacuum forming as well as outsourced machining. What NRC Projects doesn’t skimp on is quality and enthusiasm. Let’s get to know Ratcliffe better and hear from him in his own words about what he’s up to and what NRC Projects has been up to lately.

[Editor’s Note: The following text is presented in Rattcliffe’s own words.]
My passion for RC first started as a child – my dad took me to local RC clubs and races and I was mesmerized by it. RC magazines from that era further fuelled the obsession with the hobby. Since childhood, the appeal of RC has been very strong both in terms of racing and design. From the fascinating design of futuristic looking Tamiya and Kyosho buggies in local hobby shops growing up to the ‘golden years’ of RC in the late 80’s and early 90’s with epic races between RC heroes such as Masami Hirosaka, Cliff Lett and Brian Kinwald.

One of my favourite things about micro scale RC is that it doesn’t require a lot of space to set up a track, so the fun of racing can also be had at home, in the kitchen, living room or in the garden. Growing up I collected the Tamiya 1/32 Mini 4WD cars powered by two AA batteries; I always wished they had been fully radio controlled for races at school and at friend’s houses. 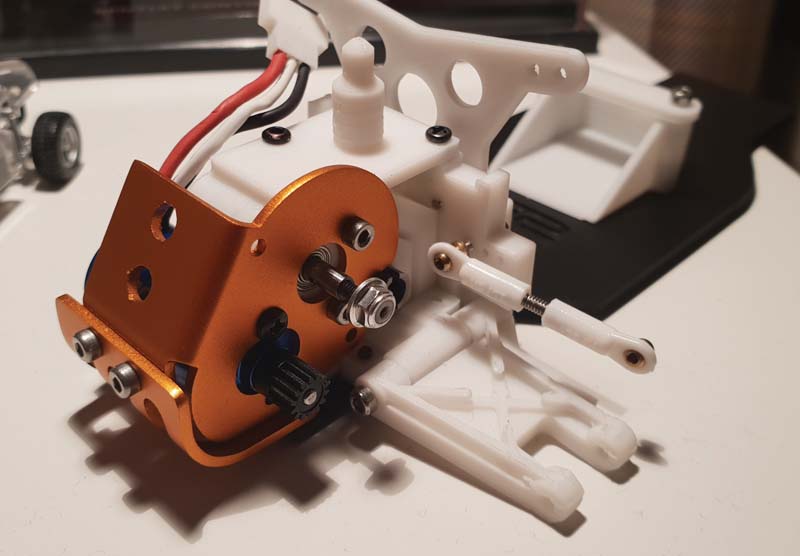 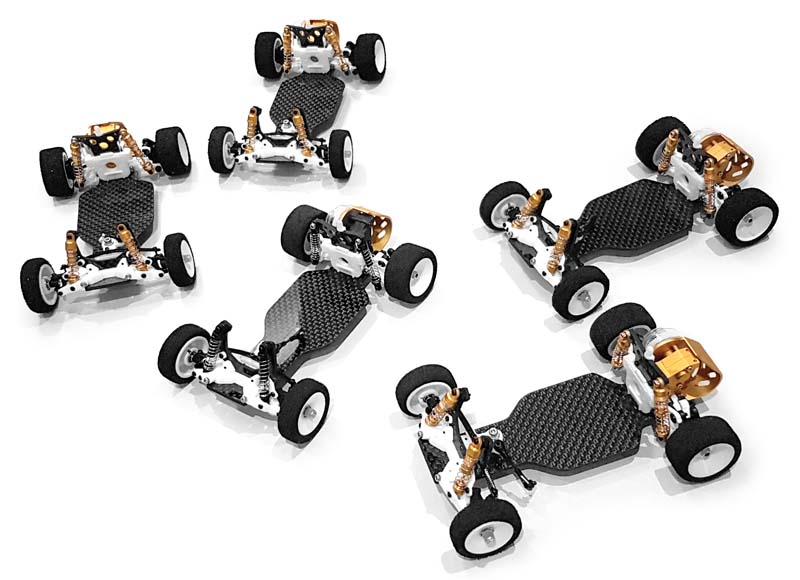 In 2015, I embarked on a personal project: a 1/32-scale vintage style buggy that would be a micro-sized tribute to the legendary RC10 Graphite. This was a dream project for me as I was excited to create something small enough to race around in the house that felt and looked so nostalgic. I named it the NRC-32.

It was via social media that the project gained lots of interest, and it became apparent that others shared the passion for my micro vintage project. It soon made sense to create a Facebook page, to keep all the updates in one place, and so NRC Projects was born.
NRC Projects has always consisted of me in my hobby room at home.

Anything I do is created in spare time and weekends outside of a busy and demanding day job. The NRC-32 was an exercise in sourcing donor parts from cars such as the Losi Micro-T and Kyosho Mini Z. Some of these parts became rarer and progressively harder to find.
It was the first time I started using CAD programs to design and 3D model parts (a steep learning curve!) and I had them 3D printed by the Swedish company, Shapeways. What started as designing one part quickly became many parts and the project really started to grow.
I then bought a vacuum former to form my own bodyshells. I would 3D model these in my hobby room, and send the data to a local friend, who machines the molds on his CNC machine. Ultimately, only a very small number of cars were made and sold as donor parts became very hard to find.

It was then time to move on to the next project, staying with the theme of micro sized vintage nostalgia. Named the Y24, it was a conversion kit for the Carisma GT24B/Rally to create the look of the 1994 Yokomo YZ10 in 1/24 scale. The advantage of this conversion kit was the sourcing of individual donor parts was no longer an issue. Having spoken at length with Ivan Carisma, who supported the project, we collaborated to make a small-run of combination kits, which included his Carisma GT24B, stripped back and ready for our conversion kit. This was aptly named ‘4Y24’. We started making kits available and saw popularity in the conversion, with many people recreating Masami’s iconic 1993 worlds winning YZ10 bodyshell and wing.

Whilst popular, I continued to receive enquiries about the NRC-32 car. I knew that I had to go back and re-visit the concept of this car and address the issues that had prevented them being produced in greater numbers. So in 2019, I went back to the original concept of a micro sized tribute to the legendary RC10. The CAD software I started using, Fusion360, was more advanced and combined with taking the plunge into 3D printing for myself, opened up more possibilities for developing and experimenting with designing parts. 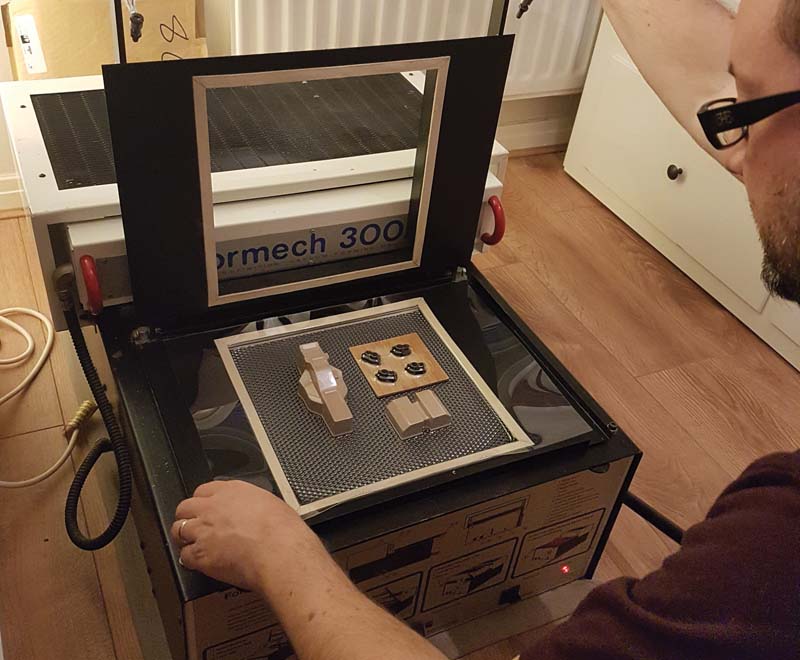 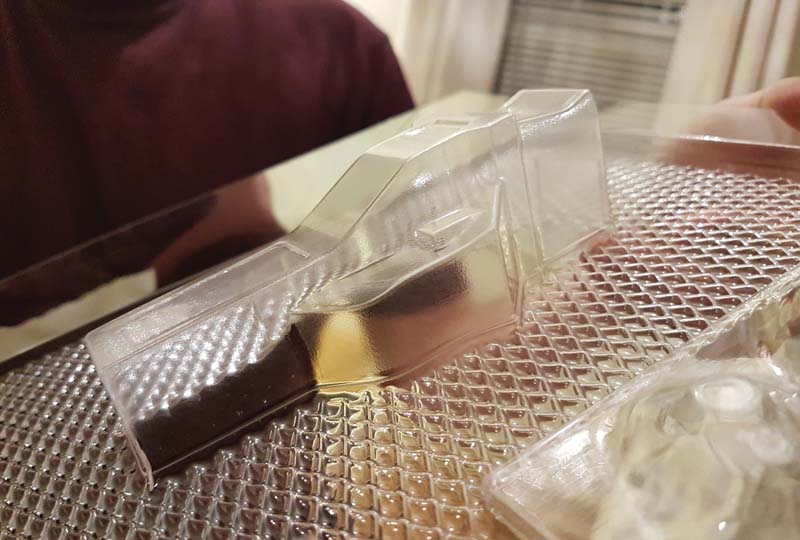 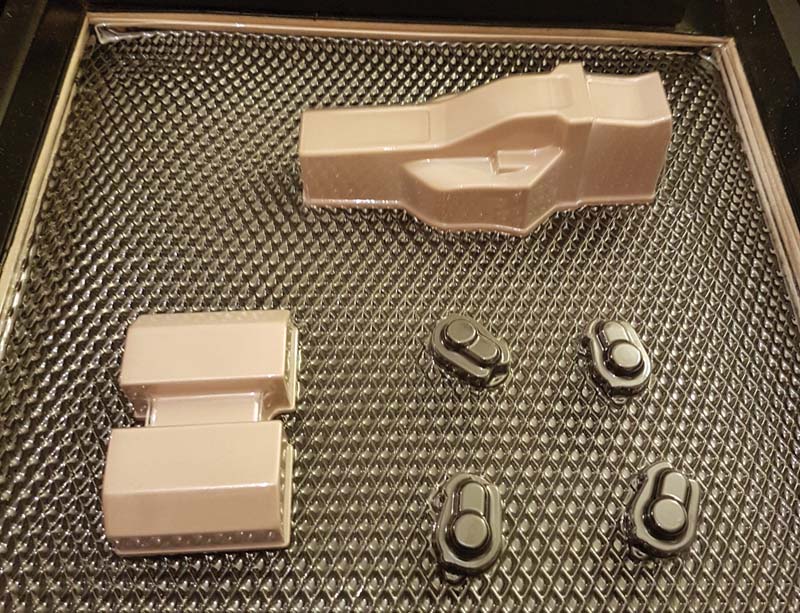 I designed the buggy to be as faithful as possible to the legendary RC10 Graphite, with a 2.5mm matte finish carbon chassis beautifully machined by Fibre-Lyte in the UK. I tested various 3D printers and filaments to eventually achieve a great combination of strong parts and a nostalgic colour.

The colour of most plastic parts is a shade of off-white to match the white nylon parts used for components in the late 80’s and early 90’s. The shock towers are machined from natural colour GRP, looking very authentic and period correct.

The car is suitable for 1/27 micro sized electronics used in Mini Z size class. Companies such as GL Racing, XRX, Ensotech, Surpass and Atomic make highly advanced motors, ESC’s, servos and receivers that are perfect for the NRC-24. A small 2S 300 mAh LiPo provides huge power and long run times. The car drives amazingly like a 1/10-scale RC10 Graphite and is so much fun to drive. Watching the suspension work over bumpy surfaces is reminiscent of watching 1/10 buggies from the late 80’s and early 90’s. 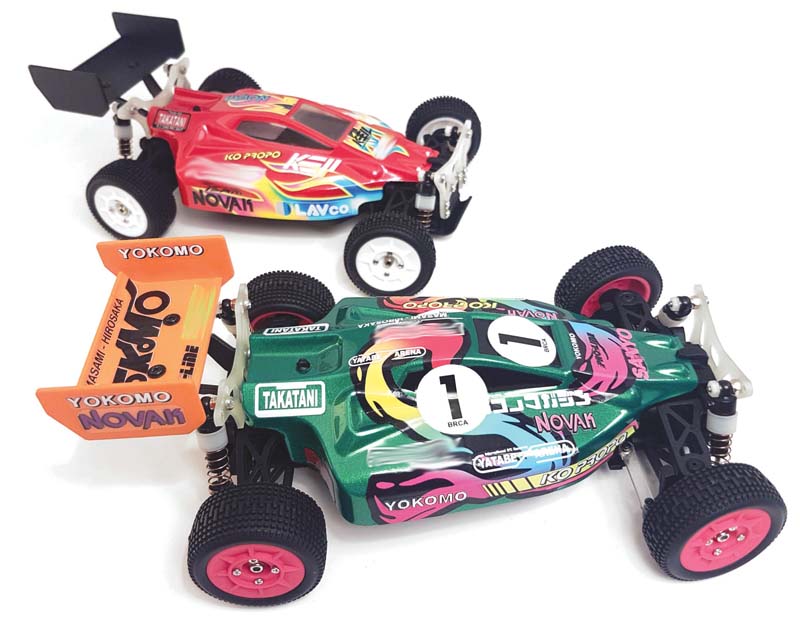 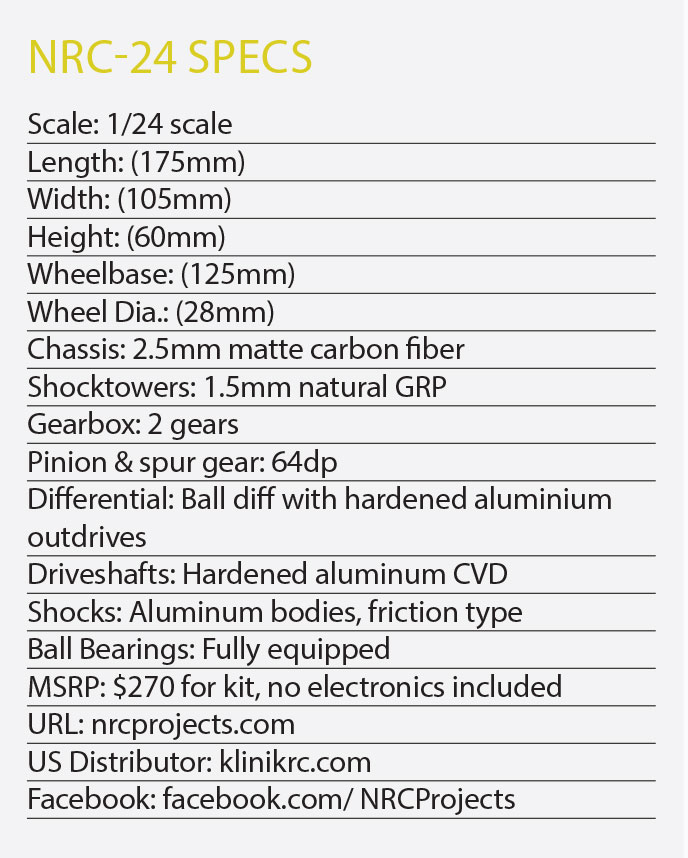 After we start shipping the first batches of kits, the focus will be what optional extras to offer. I would like to design and make 1/24 period correct options as well as some more contemporary options. Our US distributor, Klinik RC are looking into titanium screw sets and turnbuckles in a variety of colours and finishes as one area of optional extras. I will be looking into new tires and wheels along with different body styles in the future and maybe even some different chassis options. There’s an almost endless list of cool new products for this buggy to try, so please let us know if you have any preferences! 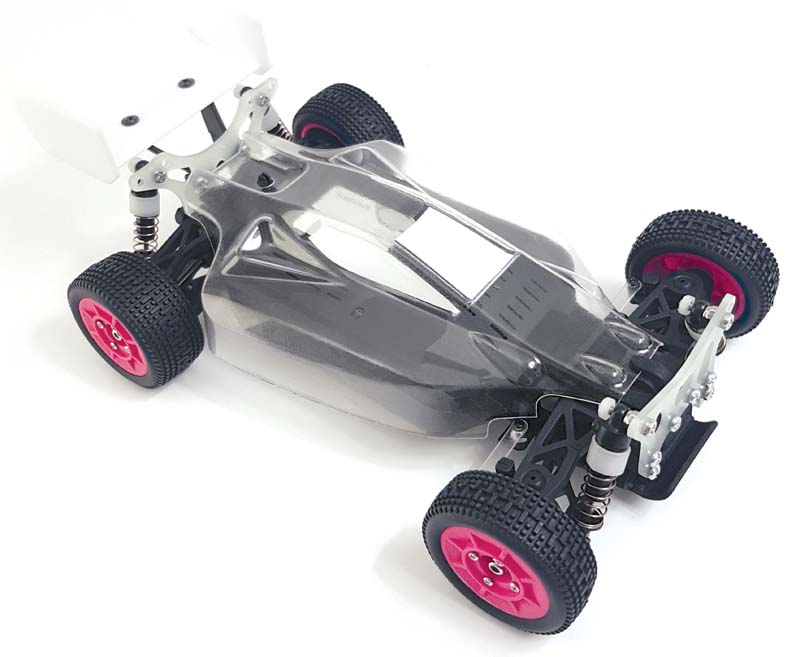 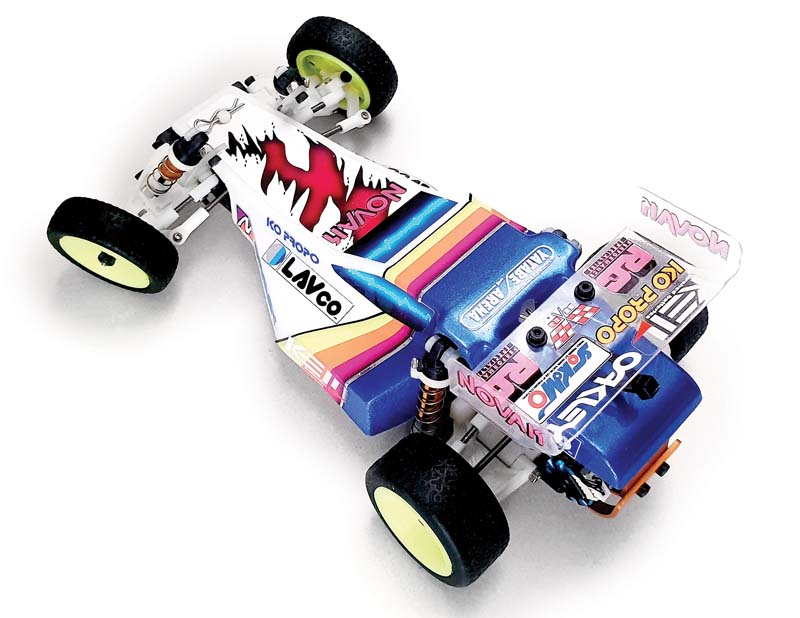