Editor’s note: Lane Riggs, aka @scale_nerd on Instagram, builds some truly eye-catching overland-style RC rigs. His creations are so realistic, in fact, that the pictures can sometimes trick you into thinking what you’re seeing is a life-size overlander while scrolling through his IG account. We’re fans of his work and are thrilled to share one of his creations in our Special Projects department. Lane walks us through the creation of one of his latest builds in his own words, so read on to see what went into this great-looking, super detailed build. We’ll let Lane take it from here…

I’m Lane and I’m from Crooksville, a small town in Ohio. This is the story of my RC4WD Trail Finder 2 (TF2) Toyota 4Runner. This special little build holds a dear place in my heart. It was inspired by my late sister, who was in love with 4Runners and mud. When I first saw RC4WD’s Limited Edition 1985 4Runner, I knew what I had to do. I snatched one up as soon as they hit my local shop, Smoke Stack Hobby Shop in Lancaster, Ohio. I had this truck for months, just buying bits and pieces, before I even touched it. I started with the wheels and tires, which are both made by RC4WD. The tires are 1.7×4.19 Mickey Thompson Baja Pro-X and the wheels are 1.7-inch Dirtylife Roadkill in black. The stock wheels were also 1.7 so I knew I wanted to retain that size. 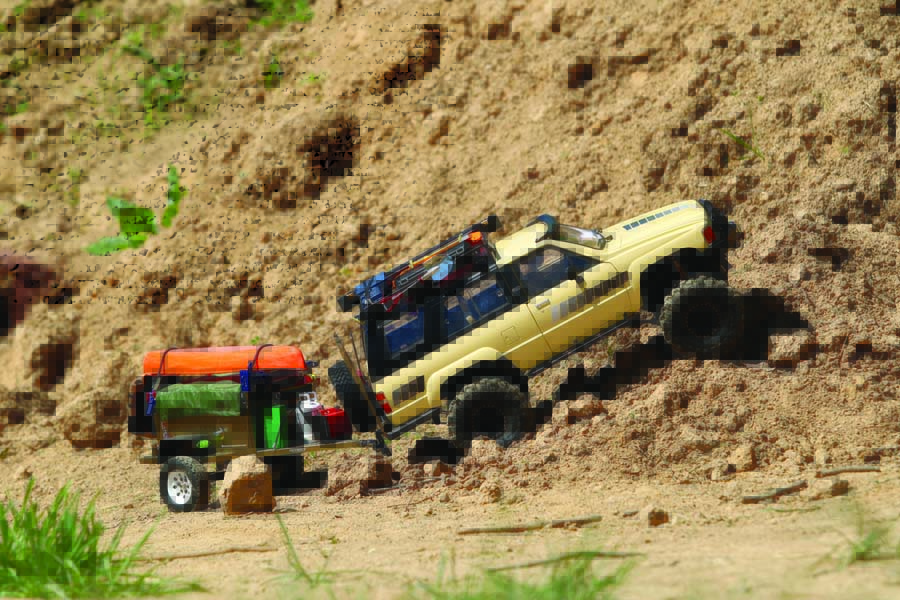 Next, I upgraded the gears in the axles with the RC4WD bevel gear set and slipped on aftermarket red Rancho diff covers. I’ve never had this rig on a scale, so I’m not exactly sure of its overall weight—but it’s heavy. To balance the truck’s load, I removed the smallest leaf spring on the front and left all three on the rear. I also upgraded from the stock scale shocks to a Rancho-branded set in order to match my Rancho steering stabilizer and diff covers.

Soon after I received the shocks I removed the springs, but I did not leave them bare. Once again, this truck is heavy, so I decided on putting 70mm springs in the 80mm shocks and 80mm springs in the 90mm shocks, all soft-rate springs. I also knew I needed to upgrade the stock driveshafts from the original plastic ones to Vanquish Incision metal units. But when you use the upgraded driveshafts, you have to modify the transfer case in a RC4WD TF2 by cutting the front and rear output shafts so the holes will line up. They’re just a little too long from the factory for the Incision driveshafts to fit. 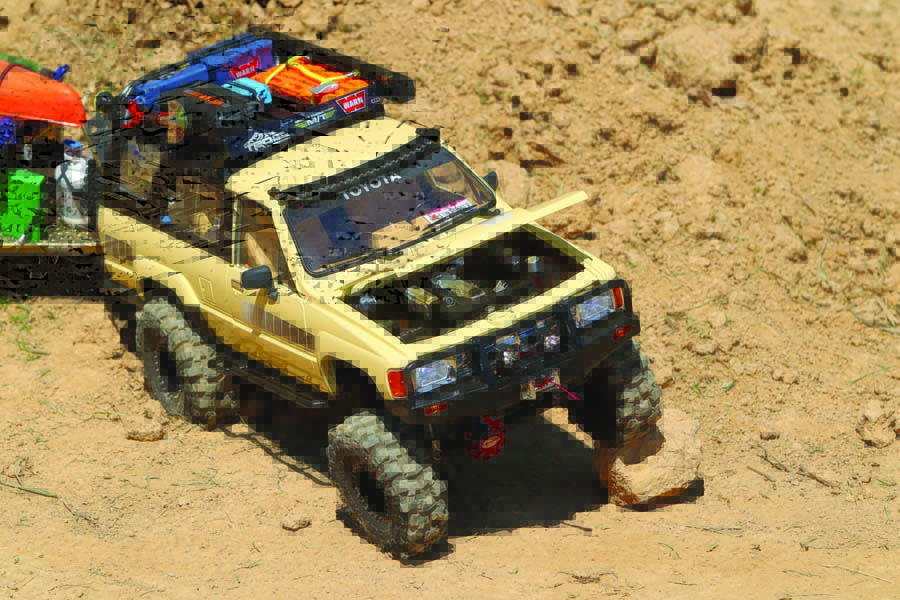 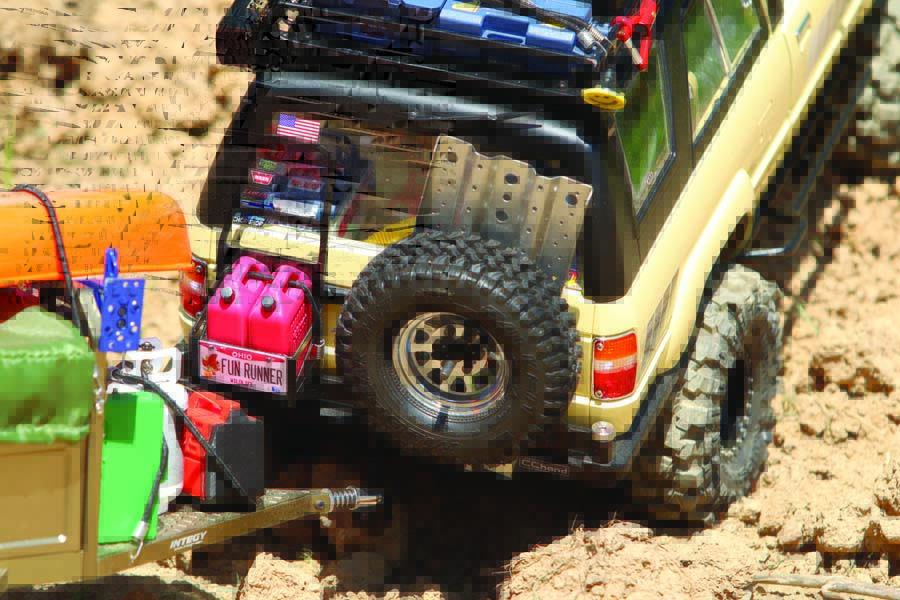 The 4Runner’s host of details includes plenty of scale accessories. 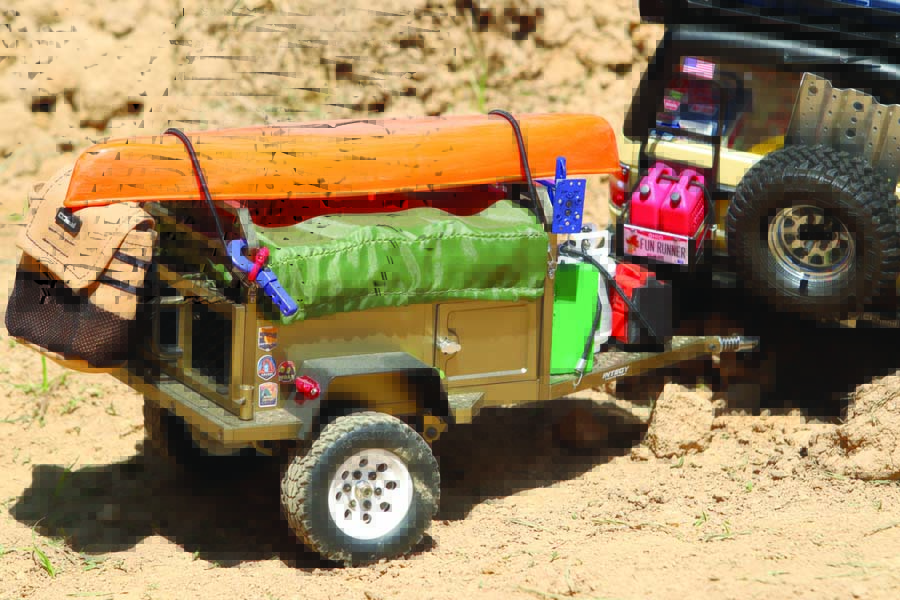 This meant a lot of trial and error; there were times I wouldn’t touch it for days. That’s better than burning yourself out on a build, which I’ve found out is easily done. Patience is key to any project. As I waited for certain parts to come back in stock, this project ended up taking 8 months to complete. The next things on my list were bumpers, sliders, roof rack and a winch.

The CCHand Thrust front bumper only fits a specific Warn winch that RC4WD makes. I know this because I bought the wrong winch the first time. The CCHand Velbloud rear bumper with rear tire carrier adorns the back. Both bumpers are designed to fit RC4WD’s 4Runner body. The truck’s RC4WD sliders combine with the same brand’s Quick Release Body Mounts to form a quick-release system that works together to do away with traditional body posts. They are specifically made for the RC4WD 1985 4Runner body and were a perfect addition to my setup. I’m happy with RC4WD’s system of mounting; the 4Runner’s body isn’t going anywhere.

The roof rack on the other hand was a whole new battle. Wanting this truck to look as perfect as I could make it, I just wouldn’t settle. It had to be straight. So I picked up another CCHand component, the Choice Roof Rack with rails for 1985 4Runner. I wanted to be able to remove the topper and not have a roof rack mount on the cab, so I mounted the whole thing above the topper. The lighting system was up next. I ended up choosing RC4WD’s scale Baja Designs pod lights to mount on the front bumper and a Baja Designs light bar that will sit on the cab’s roof. RC4WD makes specific light bar mounts for the 4Runner, so it was an easy install. The lights used in the body itself were from RC4WD’s basic lighting system for 1985 4Runner. 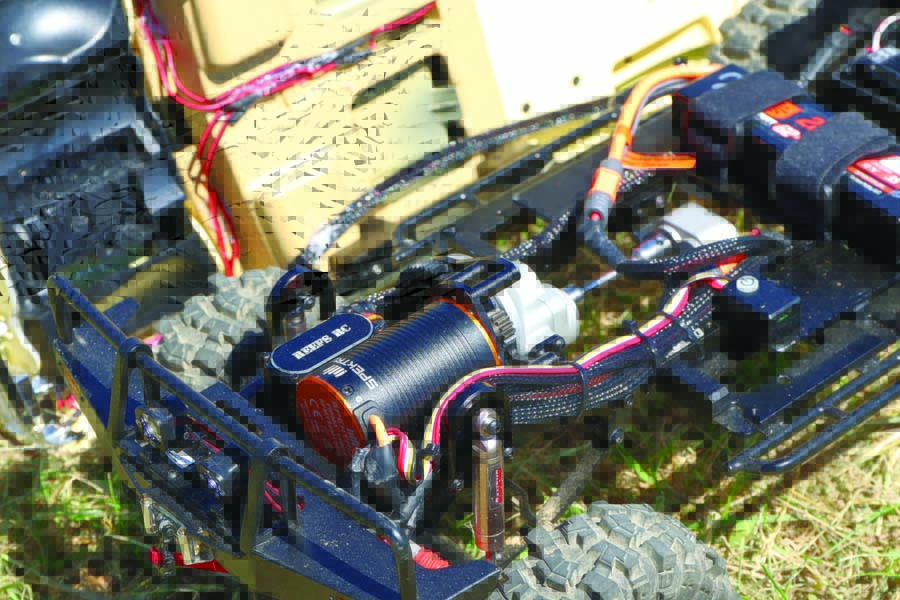 Spektrum and Reef’s RC components provide the rig with plenty of crawling capability. 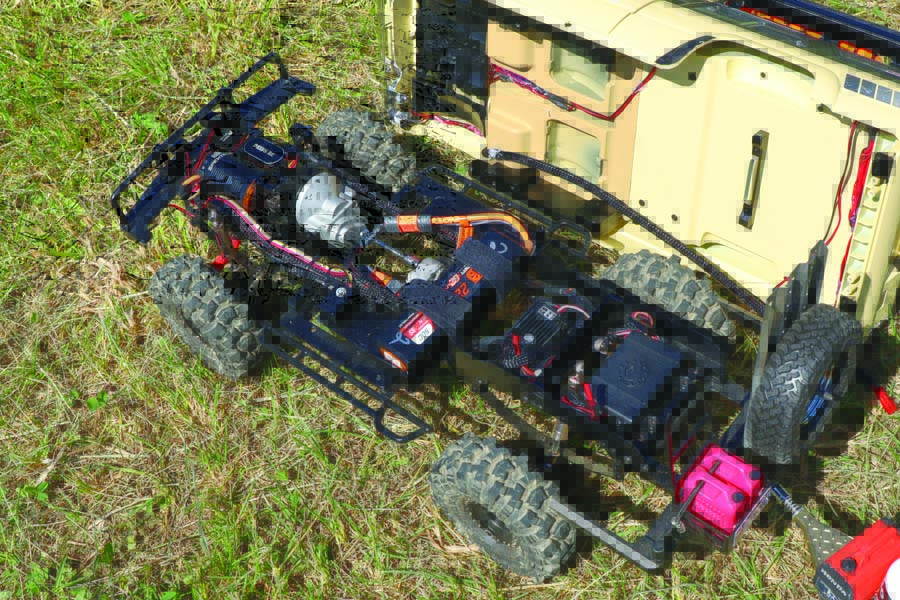 With the body off we get to see the tidy chassis and electronics setup on this build.

It’s like a spy game of all the scale goodies on this truck since I acquired them from all over. Some of the scale accessories come from AMain, Scale by Chris and Exclusive RC. A lot of parts come from RC4WD, such as the scale Warn PullzAll tool and a Warn Snatchblock (both of those are located in the back of the SUV). If you look closely, you’ll also see ARB tow straps and an ARB fridge freezer in the back, too. I found the ARB awning on eBay; that really made the overland theme. On top of that, I sourced a chainsaw and a metal sand ladder. Anything that I could find that was metal, I chose it over plastic. And that’s not all, as you can see. This 4Runner is crammed with scale accessories. It’s got some big subwoofers in the back seat, and I added some Pelican-style cases I found on Amazon on the roof, as well as some water containers.

I use a Spektrum DX5C transmitter to run all my rigs, so I knew I needed a Spektrum 5-channel receiver for all my lights and winch. It was hard to choose a motor that the TF2 drivetrain could handle. Ultimately I ended up choosing the Spektrum 2-in-1 1400kV brushless sensored crawler motor even though there was a two-month waiting period for it to come back into stock. Impatient, I dug deep and luckily found one at a shop in Pennsylvania. Moving on to the steering servo, I knew I wanted something strong but not too fast. The TF2’s leaf springs are easily bent by powerful servos. I decided to go with a REEFS RC 444 steering servo, which has plenty of torque at 7.4 volts.

You might notice the ESC is on the battery tray and you might remember me saying the motor is a 2-in-1 unit, which means it has its own ESC built in. Well, this little black ESC is a Power Hobby 1040 ESC and it’s wired straight to my battery lead for power and then plugged into an auxiliary channel on my receiver. This allows me to power my winch and operate it through my DX5C without the need of a second battery and winch remote, which is recommended when installing a scale which from RC4WD. After I had the truck ready to be wired, I set it aside and started on the trailer. 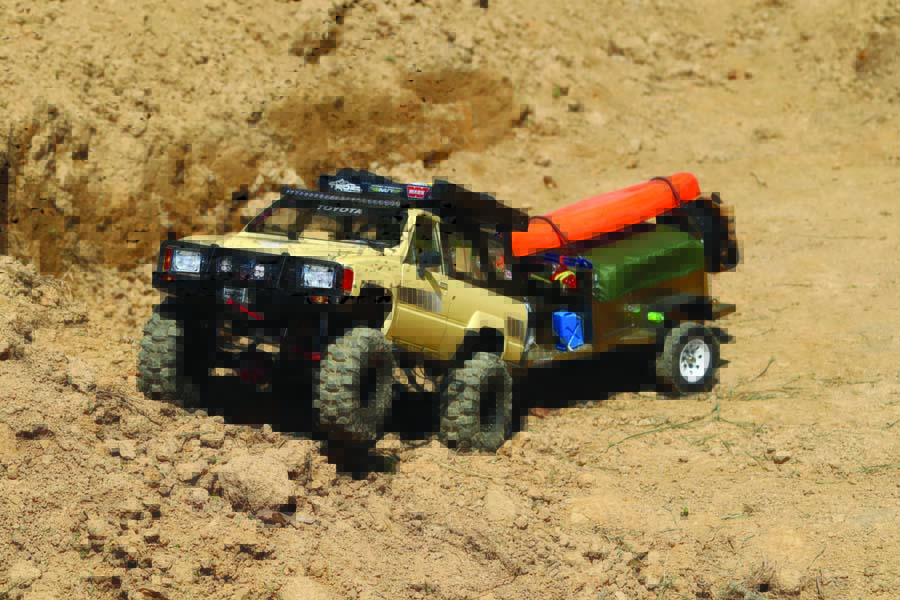 RC4WD’s TF2 takes on rugged trails with ease, even with a trailer in tow. 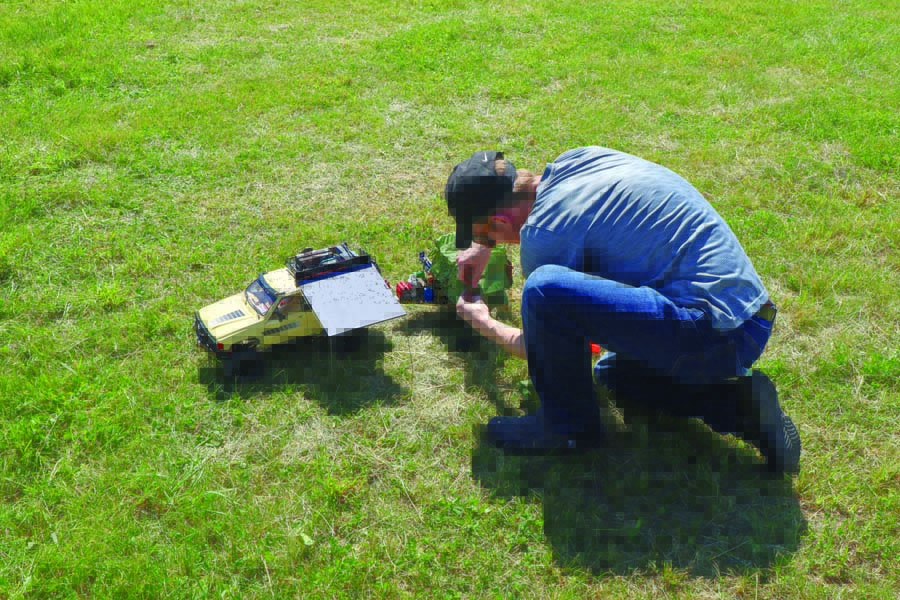 Riggs putting some finishing touches on the adventure rig and trailer. 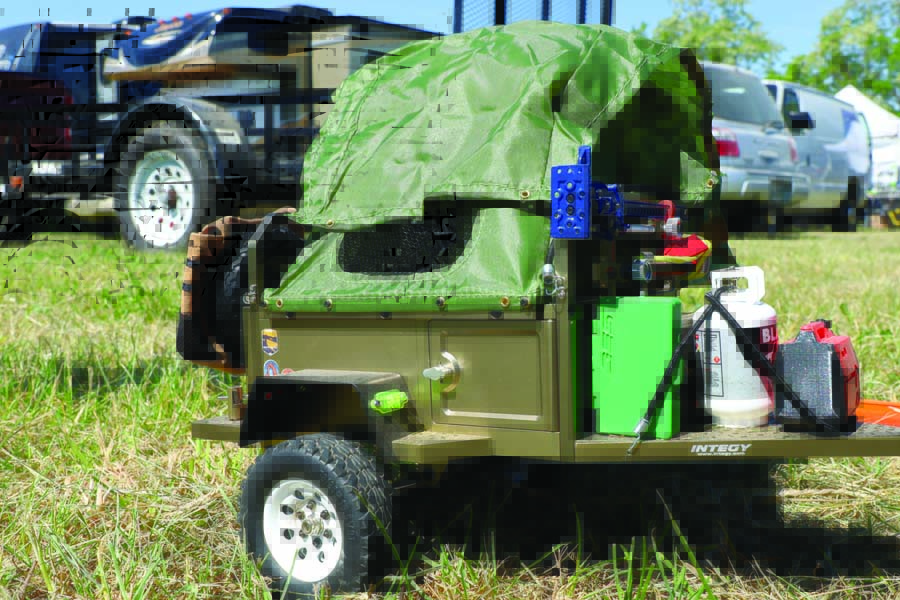 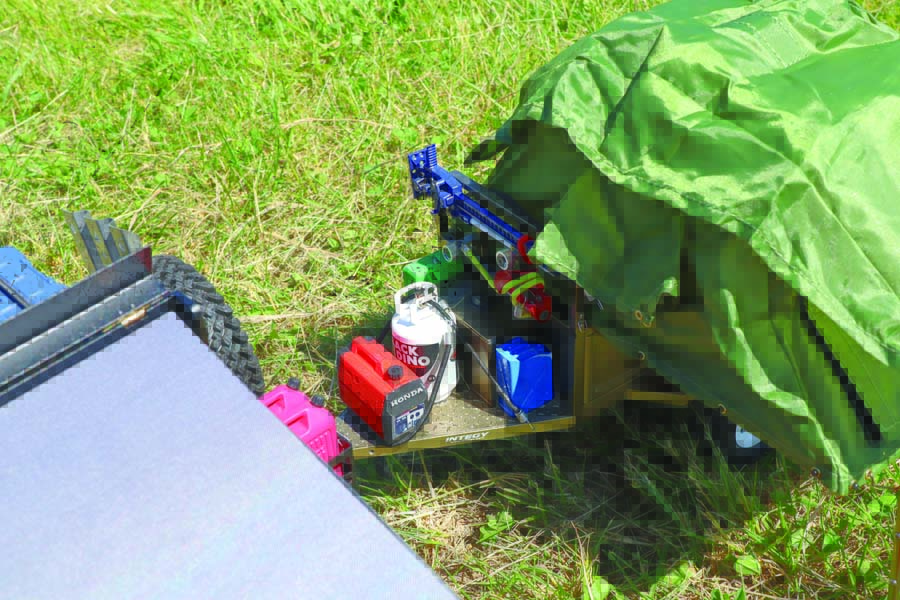 We really dig the details that Riggs added to the trailer.

The Integy Camp Trailer is a fully functional aluminum overland trailer. I gave it its own spare tire and CCHand Trasharoo bag. I also threw some scale goodies in the bottom storage which include a scale oil pan and a toolbox. The posts for the tent are also kept inside. On the outside I have an SBC camp stove and a lot of aluminum goodies from RC4WD, including a Hi-Lift jack and foldable land anchor. I have a propane tank for the camp stove along with a generator, all to make the overland adventure that much easier. I scavenged the canoe and a couple fishing implements from a Walmart toy and added them in too. 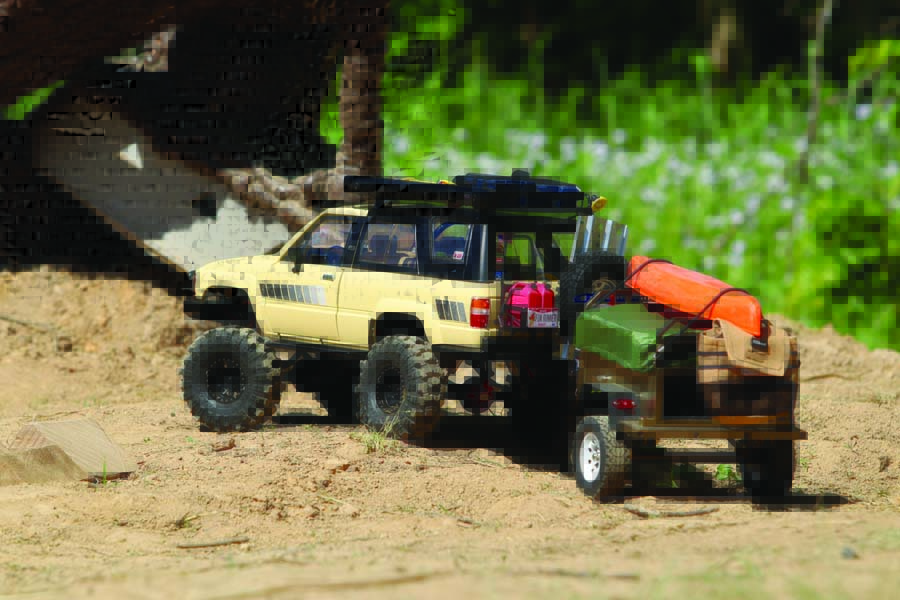 This scale rig is ready for its next adventure.

The trailer lights run off of a 9-volt battery hidden in the box on the front of the trailer. I decided I needed some help to clean up the rig’s wiring. I took it to the RC Chop Shop and enlisted their help in working some magic with a clean wiring job. They used black wiring loom and made everything as pretty as he could, keeping everything inline inside the inner fenders, and it all functions as it should.
This overland build turned out amazing, and I couldn’t be happier with the responses I’ve gotten from the people who see it. I hope you all enjoy checking it out.

Text and Images by Lane Riggs