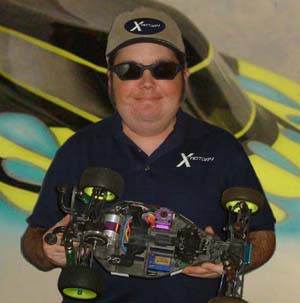 The Dirtinator is Trinity-powered again, but Brian Kinwald won’t be going old-school with a return to former sponsors Team Losi or Associated. X-Factory cars will remain Brian’s weapon of choice in 2008, with a truck on the way. We’ll keep you posted on the truck news; for now, here’s the official PR from X-Factory.

“Driving The New Math is like cheating,” said Brian Kinwald as he re-signed with X Factory for the 2008 season.   “I’m so happy with both the  X – 5 and  X -6  I can’t imagine doing anything else.   And now we’re starting to work on a truck!  Amazing how far this little company has come in such a short time.

“I’m looking forward to running the entire 2008 off-road season. Chazz and I are writing this from Trackside Hobbies in Milwaukee where I’m racing this weekend.  Next weekend we’ll be in Tampa for the Clash, then CRCRC MidWinter after New Year’s and up in Portland Oregon the last week in January.  X Factory will have me racing all over the country all season long. My health is back and I’m so pumped to be running full blast with these great new cars.”

X Factory will be adding to the Dirt’s Dialed Parts line shortly in 2008, with three new parts in the pipeline, some of which will fit the Associated B4. For more information, check out www.4wdrc.com and www.2wdrc.com .