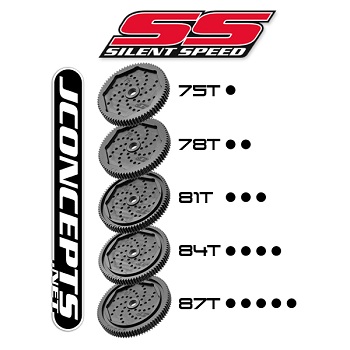 The heart of any R/C vehicle is the transmission, at the top of the transmission lies the spur gear; an integral part of racing performance. Designed with several key aspects in focus, JConcepts introduces the Silent Speed line of spur gears for select Team Associated vehicles.

Spur gears or straight-cut gears are some of the simplest forms of gears; however they directly influence the ratio, speed and sound of R/C vehicles and they are extremely important. These gears when meshed together correctly provide the transfer of power from the motor to the transmission and are one of the key elements in the versatility and sound of the vehicle.

Silent Speed spur gears are precision machined making them uniquely concentric over standard or molded gears giving the user a consistent gear mesh allowing a more precise adjustment and more “silence” on the race track. The detailed machining provides a pattern vented area and secured slipper pad on both sides giving more consistent slipper performance. The gears are marked for size in 2 different ways so they are identifiable either assembled within a slipper assembly or as a stand-alone part. Silent Speed spur gears are also branded with the small JC logo for brand identification and authenticity.

Already a winner, the Silent Speed Spur Gears scored a victory at the 2011 ROAR Off-Road Nationals in the 2wd Short Course Class in the hands of Ryan Maifield on his Factory Team SC10. Gear-up or Shut-up, Silent Speed by JConcepts.

Machined, recessed dots on the outer edge indicate size while assembled within the slipper assembly for the easiest identification.