From JConcepts:
The JConcepts team continues to drop high-performance body shells for the RC drag racing enthusiast. Since 2017, JConcepts has dedicated the drag racing line-up to scale likenesses while utilizing official licensing from full-scale automakers. The Chevrolet Copo Camaro is targeted to the driver looking for the real thing, the scale side to drag racing which focuses on vehicles which customers want to replicate in the RC world. Since the arrival of many dedicated RTR vehicles to the market, there is always need for a change of scenery in the body shell department.

One of the baddest production cars on the market, the Copo Camaro is a special-order item from General Motors outfitted to get down the track in a hurry. The 2022 Chevrolet comes off the assembly line featuring high horsepower, astute forward handling, and racing wheels and tires. The design team at JConcepts dedicated this project to classes which focus on scale features, may or may not mandate wheelie bars and restrict power to level the playing field. Simply stated, the 2022 Chevrolet Copo Camaro is about scale street drag racing.

The Camaro is a legendary name at Chevrolet, the styling requires on-point specifics and must carry a legacy with it. The designers went very heavy on chiseled and scowling front-end features which always trace back to the headlights. Under-cut sections with sunken grille and wedged headlights gravitate focus toward the center of the nose. Low and centered, a large decal completes the lower grille and has a massive appearance. Cut back into corners of the front-end are louvers which provide a lot of air channeling at high-speed. The front-end also features a built-in splitter which blends nicely into the front-end.

The hood-scoop is a defining feature with inlet which can be trimmed or cut to promote more airflow through the front-end. The cab is placed just behind the front-wheels for front bias down-force glazing off the front windshield. Channeling on the roof provides increased stability and runs over the hood-scoop also providing centered placement for Copo specific decals. The cab drops off in the rear to a short rear deck which whisks through the air with ease. Fully detailed rear bumper and valance area support included decals for taillights, and license plate and Chevrolet logos.

A heavy body line in the rocker panel area supports rigidity, shows a slight hour-glass shape, and compliments the scribed door location lines. Recessed side windows are a large part of the design giving some structure to the cab allowing it to hold shape during high-speed runs. The 2022 Chevrolet includes large decal sheet with “off the assembly line” graphics blazed with 572 engine identification, Copo, orange / black racing stripes, and Chevrolet name plates along with an array of JConcepts logos.

The JConcepts body includes overspray film on top of the body, window mask for quick paint and prep and detailed decal sheet. The product is built, formed, and printed in the U.S.A. and always backed by JConcepts customer service, supported, and developed by professionals with style and authenticity. Look for reputable dealers and distributors and demand authentic and licensed products – choose JConcepts. 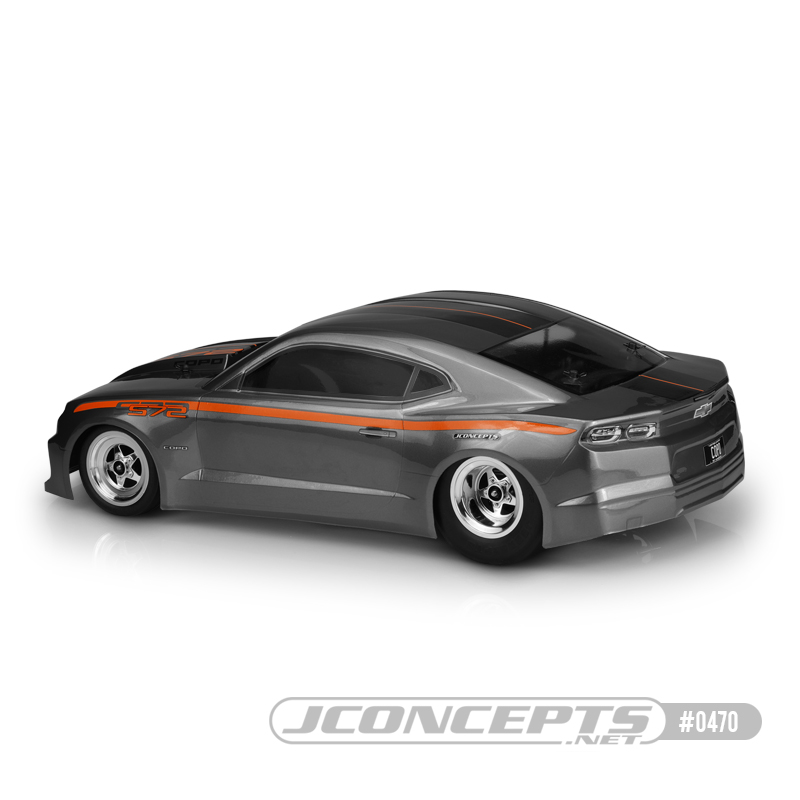 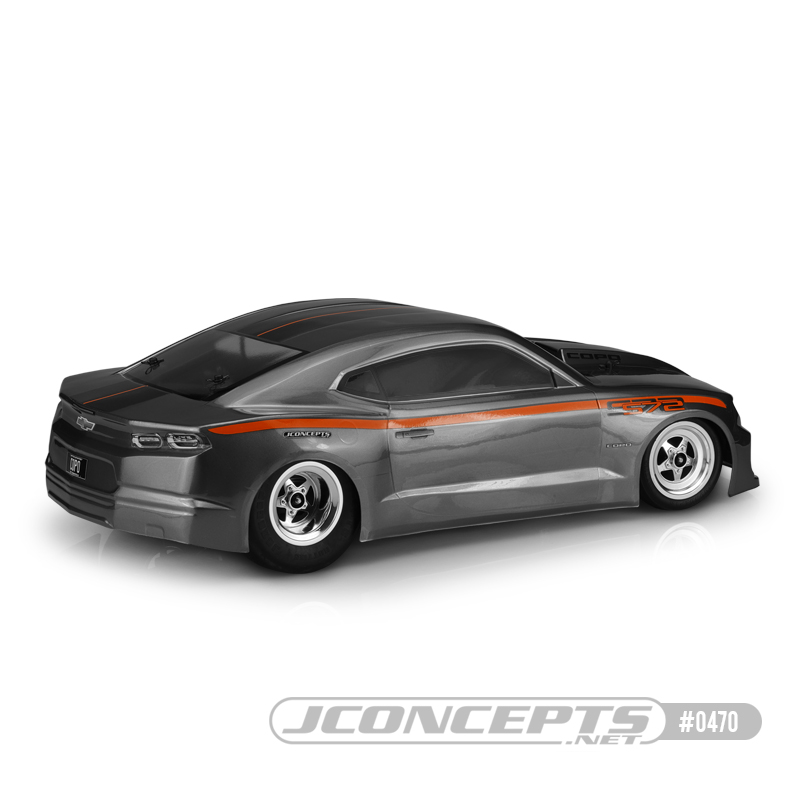 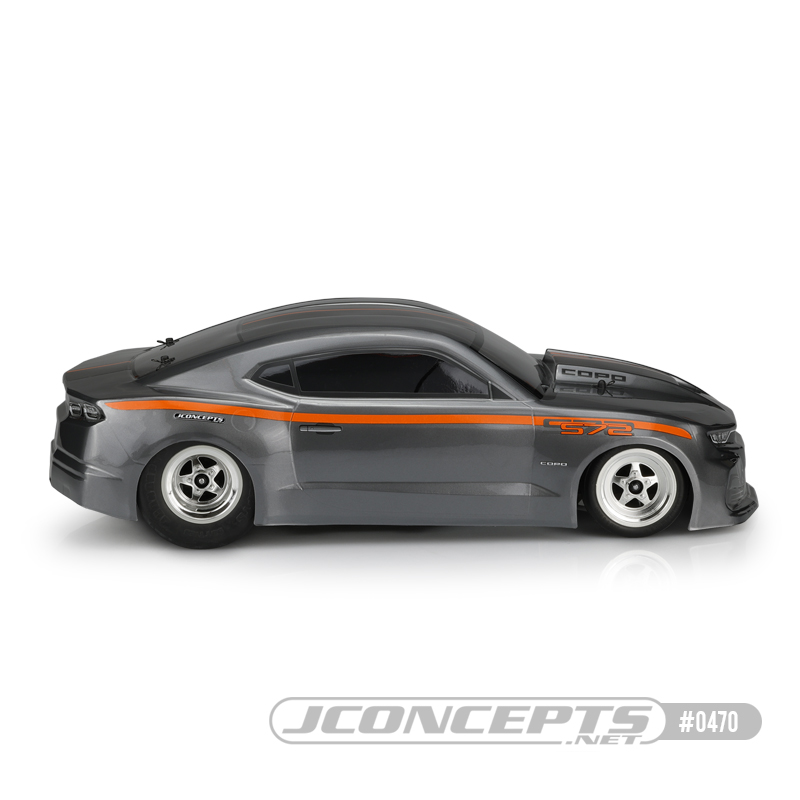 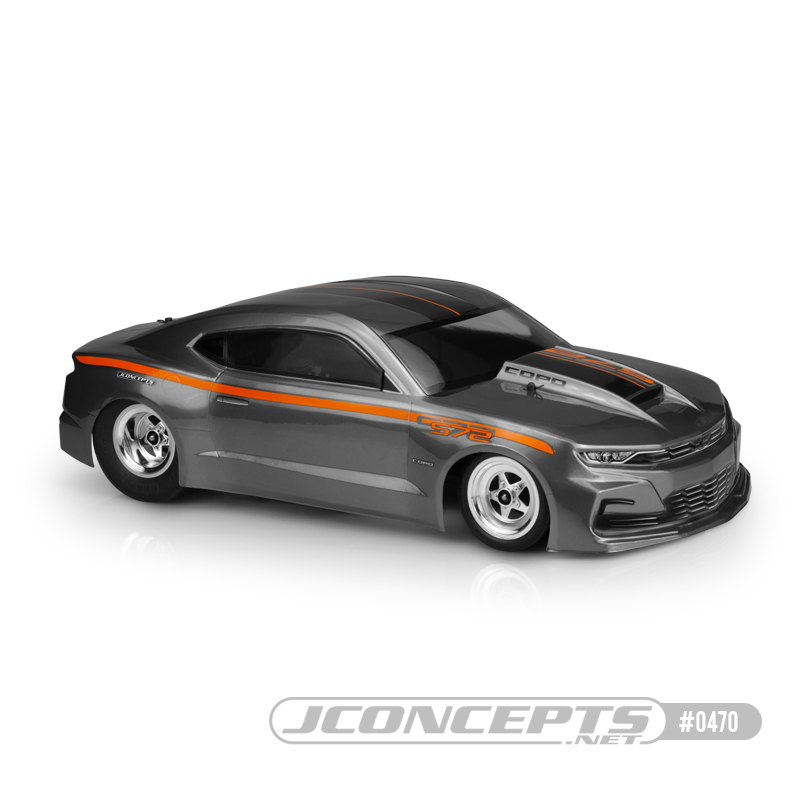 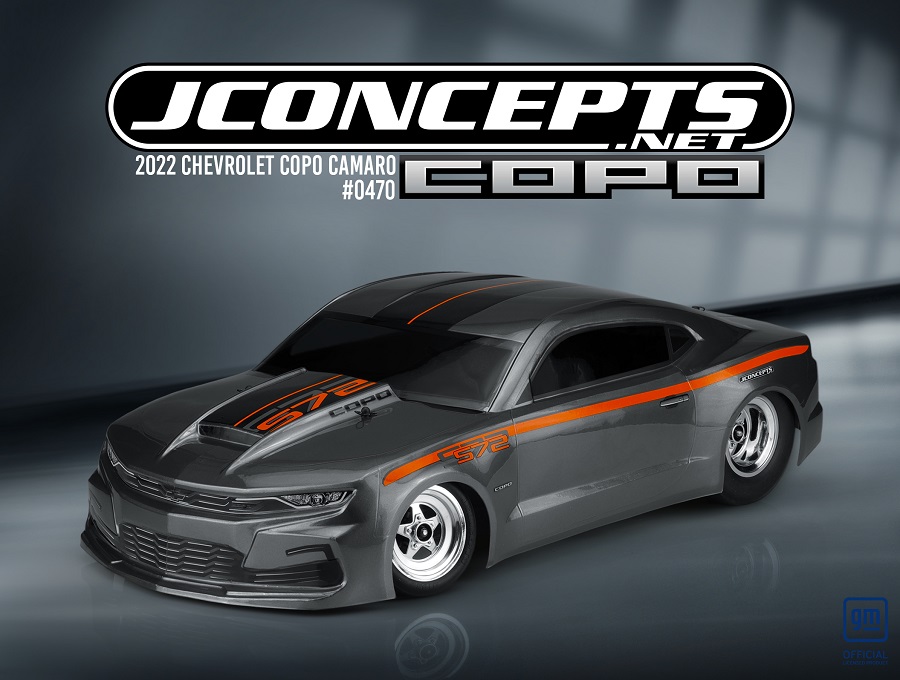