Sourced twin turbo V6, vaporizing its giant 20-inch diameter tires immediately into billowing smoke clouds, all while doing it Hoonigan style. It was quite a big deal in the automotive world. The trickle down effect from real world automotive creations to RC replicas is real. It’s what has inspired every RC ever and it’s what also inspires me to build RCs.

Let’s take a step back in time from the last issue of RCCA (December 2020) which featured Fresh Squeezed RC’s replica Hoonigan ShartKart. Way back to my very first attempt at a scale replica RC build. The Hoonitruck.

When the real Hoonitruck was unveiled, it broke the internet. The AWD Ford F-150, shrieking and blasting flames from its Le Mans race car sourced twin turbo V6, vaporizing its giant 20-inch diameter tires immediately into billowing smoke clouds, all while doing it Hoonigan style. It was quite a big deal in the automotive world. The trickle down effect from real world automotive creations to RC replicas is real. It’s what has inspired every RC ever and it’s what also inspires me to build RCs. 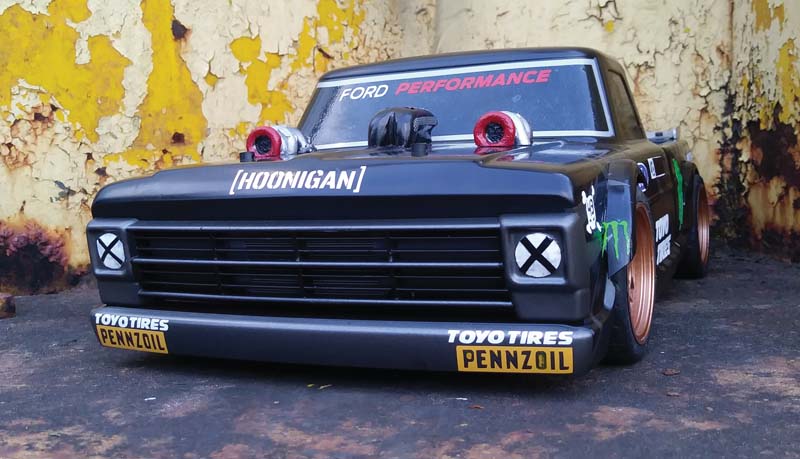 Seeing the full-sized Hoonitruck rip around was one of those instances in your life when you just know that you have to do something in the momemt, and that’s what I did. I could imagine lots of rad builders sitting there at the bench, dreaming up how they were going to do their version of the truck. Fully inspired, I also got busy on my own version of the machine. 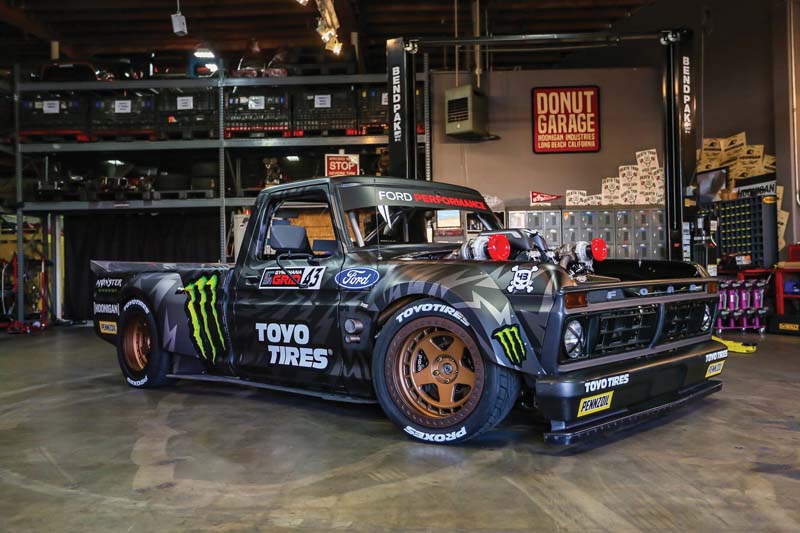 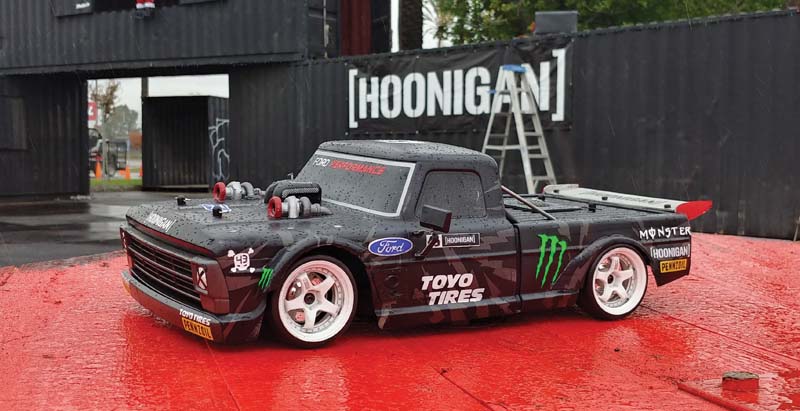 Did I mention this was going to be my first scale replica? I was certainly a little apprehensive about how it would come together, but you never know unless you try! I already had the chassis I wanted to use, an HPI RS4 Sport 3 Hoonicorn. It made sense in a lot of ways. Mostly because I felt that HPI would certainly make a production version of the Hoonitruck and my guess is that it would most likely be based on the RS4 Sport 3 chassis. My plan was to compare my version and the would-be factory version side by side after it eventually came out. Unfortunately that never materialized. HPI never released their own version of the Hoonitruck.

With my chassis decision made to press forth with the project, I had to figure out what body to use. On my lunch break, I went straight to my favorite local hobby store, Victory Hobbies. I knew my only hope was to find a Vaterra V100 F-100 body, although the real Hoonitruck is years newer it was as close as I could get. When I built the truck, there were very few options for a 3D printed body and even fewer that fit into a realistic budget and time frame. I was in luck as the shop had just one clear body left. I grabbed that, a set of Traxxas TRX4 Bronco mirrors and some black and graphite paint from Duratrax and headed out. To say that I couldn’t wait to get home was an understatement.

I immediately trimmed and fit the body to the chassis but I soon realized that I had run into an issue. The Hoonitruck is crazy wide and my RC replica would require fender flares to get the right look. I had no idea how I was going to make the flares. What I did have on hand was a damaged Mercedes touring car body that was endowed with wide fenders. So a quick snip and I had my donor flares ready to go. In hindsight, I wish I had made them from styrene… but at the time I didn’t really know what styrene was and much less how to really use it. This was my first scale build, remember?

Back to paint. I painted the outside of the body so i could ensure that the finish had the perfect semi-flat sheen. I started with the charcoal color and once that was dry, I hand masked all the lightning bolt graphics and sprayed on a coat of black. After peeling the mask I was relieved to see a presentable likeness to the real deal. This in itself was a huge relief and motivator to finish the rest of the project.

I called my friends over at Pushrod3d.com for help. They whipped up the 3D printed turbos, fuel cell, and exhaust parts for me in record time. I called upon other friends to help me with the rest of the graphics and they got the vinyl cut for me faster than I could have ever hoped. (Thanks Megan and Jason!) 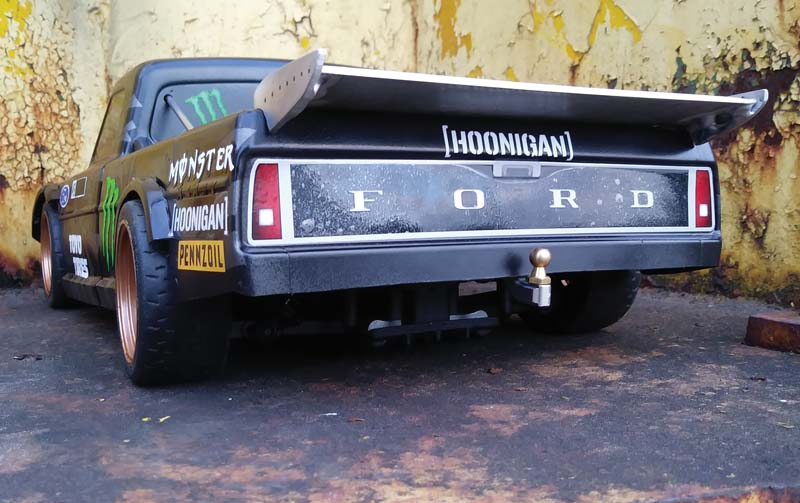 With materials in hand, the next day saw that the truck progressed quickly.

Once again on my lunch break, I cut and welded the wing out of sheet aluminum and fastened it down to the bed. After I added the HOONIGAN sticker and a trailer hitch from Yeah Racing, the rear end of the truck looked complete. I bent up a roll bar from 3/16’’ solid stainless steel, reamed the body and used some E6000 glue to hold it in place. One of the last pieces of the puzzle was the intake. I took a solid chunk of aluminum and a die grinder to make it happen. Ironically, the real Hoonitruck has a 3D printed aluminum intake, which at the time was the largest 3d printed automotive part ever. Fun facts.

I had done what I set out to do, and with the exception of the 3D printed parts I was pretty much done with the build in only two days! Within a couple more days I had my turbos, exhaust and fuel cell. I couldn’t finish, paint and install those pieces fast enough. Once I did, it was complete and I was stoked, as was everyone else it seemed. I snap a few pictures and hurried to share my creation online.

Within days it caused a stir with reposts from Ken Block and the Hoonigans, I was blown away to say the least. I am still amazed at the big things this little truck has done. With it, I was inivited to visit Hoonigan HQ, the Donut Garage. This RC Hoonitruck can be seen on the same Hoonigan YouTube episode that also features my ShartKart build. The episode name is “Hoonigan RC Takeover” in case you want to check it out on YouTube. It was absolutely unreal to be able to drift the truck around the real Donut Garage, full circle stuff for sure. 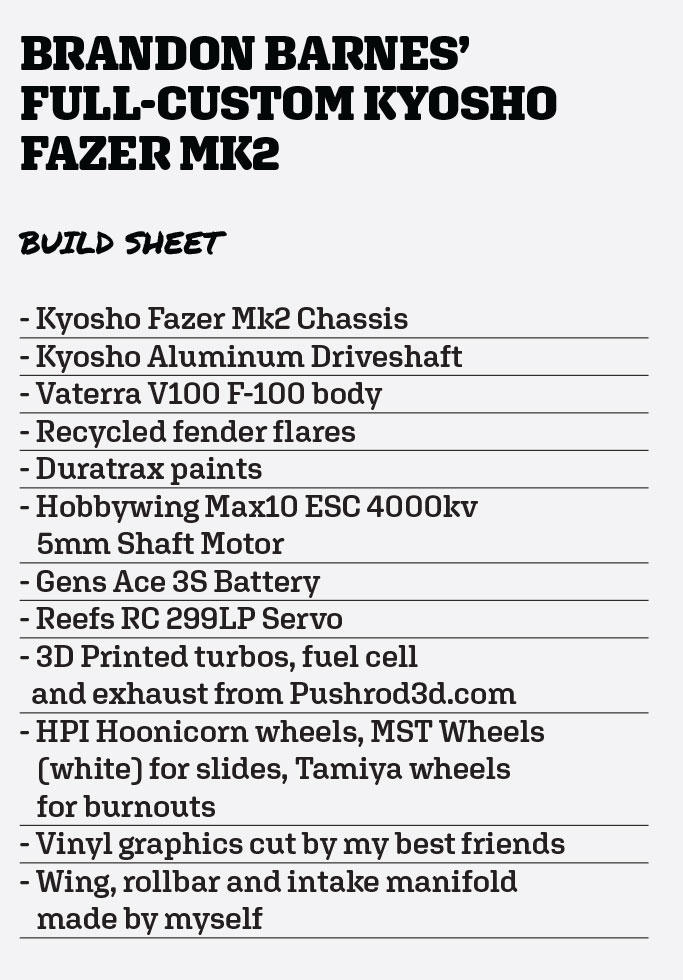 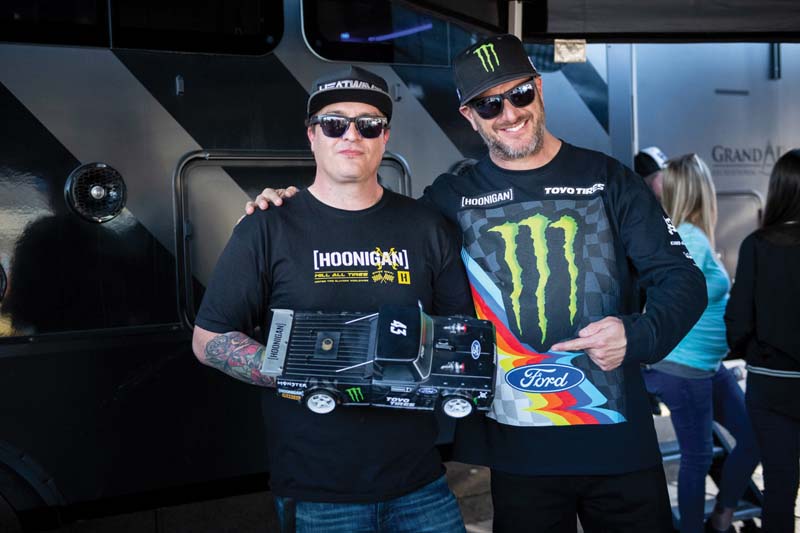 ”I was also fortunate enough to
meet and talk with Ken BLock and his crew at the last BurnYard event.”

In so many ways this build has helped to catapult my Instagram page and my confidence to tackle more replica builds. With that being said, don’t be afraid to try new things. Try those things that you want to accomplish and try them as hard as you can. Sharpen your skills and build your confidence. When you achieve it, it’s a truly great feeling. You just might think to yourself, “I never would have thought” as well.

I would like to dedicate this article to my dad. I miss you, I love you Pop.

Text and Images by Brandon Barnes