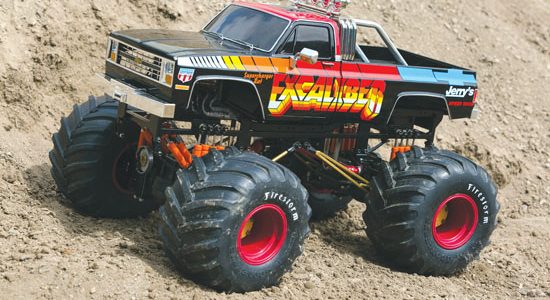 The retro segment of the solid-axle scene is growing at an explosive rate. People are building ’80s-style monster trucks using old-school Clod Busters, custom chassis and more, then finishing them to look like popular trucks from that time, such as Bigfoot, Casper, and Stomper. One of the most popular trucks being replicated—and one of the coolest-looking trucks out there—is the Excaliber monster truck, which was the first monster truck to be designed using CAD software (sorry, it wasn’t Bigfoot 8). Scale Excalibers have been built, but none stand out like Matthew Mortillo’s built. Matt says that he always wanted to work on a scale build, and since trail trucks aren’t his thing, he decided to build a replica of his favorite old-school monster truck—and we’re glad he did. Check out Excaliber! 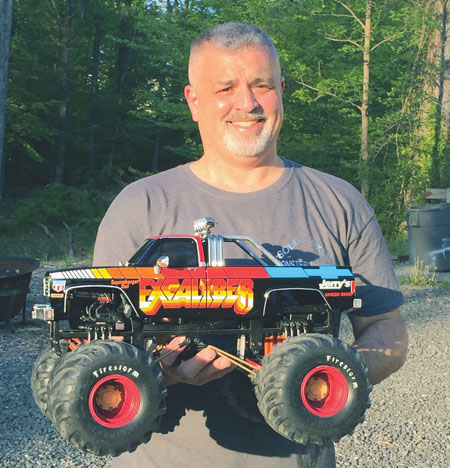 Realistic Drivetrain
Matt’s goal was to make this truck as close to the real deal as possible, but it still had to run. He had to find a realistic drivetrain to put under the chassis, and chose the axles from a Tamiya Juggernaut. Matt used Extreme RC servo mounts to get the servos mounted directly to the axles, and put them behind the axles to maintain a scale look. The ends of the axles were fitted with machined outer knuckles for a Tamiya Clod Buster from Hess Machine. Custom steering links were used to tie together the knuckles and the servo. Matt even added a scale brake disc and caliper to the front of the axle, just like you would find on a full-size truck. A Freestyle RC transfer case was used to get the motor’s power to the axles because it’s strong and looks similar to what is used in a full-size truck. Heavy-duty MIP driveshafts complete the drivetrain 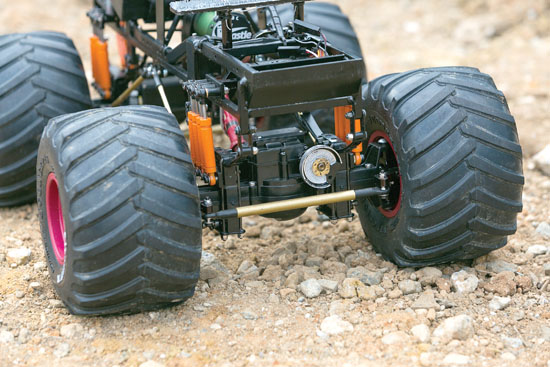 Tamiya Juggernaut axles and Hess Machine Clod Buster hubs were used to create the axles for the build.

Tribute Wheels and Firestorm Tires
Part of the look of the retro trucks is due to their large blocky tires, so Matt went to JConcepts to get some for his rig. The wheels are Tributes, and Matt colored them using red Rit dye and painted the center caps gold. Matt also took the time to paint the lettering on the Firestorm tires, which adds a
nice final touch. 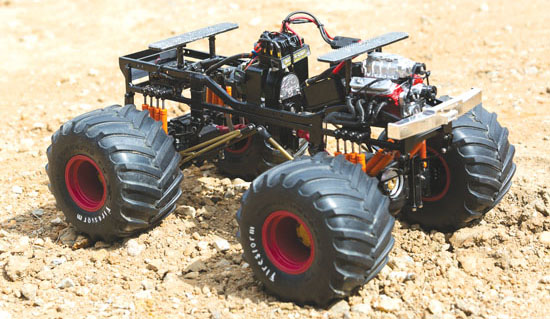 Here, you can see the completed chassis. Matt included a 3D-printed engine from Exclusive RC to make it look more realistic. 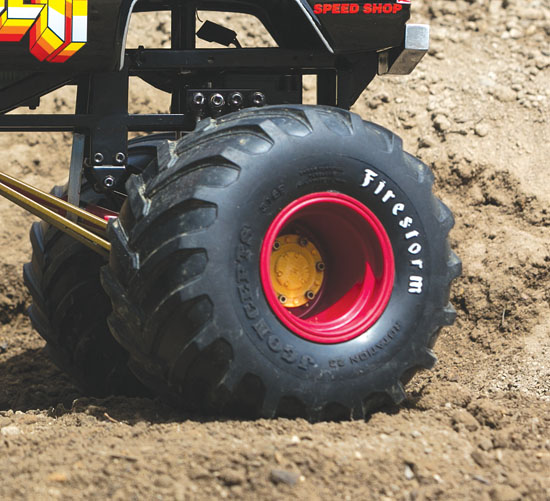 Real Steel
1980s-style monster trucks often used chassis from street trucks, which were heavily modified to be able to hold up to the abuse that those large monster truck tires and powerful engines gave them. Matt did the same thing for his build. He started with a chassis from an Axial SCX10 and had his buddy Jamie Weir use it along with Matt’s specifications to make the final product. The frame was cut up, and several pieces of steel were welded to it to strengthen it and make it more realistic. Once the chassis was done, it was sent off to get powder-coated with colors that matched the real truck. The leaf springs, ladder bars, and shocks were also done at the same time. He added a 3D-printed motor from Exclusive RC, custom driveshaft loops and fuel cell, and printed disc brakes. 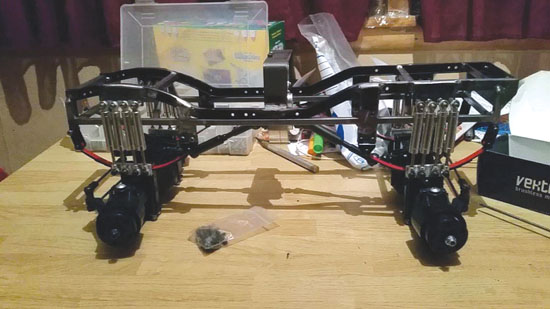 Here, you can see the modifications made to the SCX10 chassis. Lots of time was spent cutting and welding to get it this way.

Retro Paint
Matt turned to David Stellfox to take care of the body, which was sourced from a Tamiya Clod Buster. The full-size truck has a bed that is slightly longer than the one on the Clod Buster body, so it was extended using a donor body to suit the truck’s 12-inch wheelbase. Dave also took the time to fill in holes that weren’t necessary, such as the one in the hood for the stock Clod blower. He painted the truck using automotive paints, and after applying custom stickers, a coat of clear was applied. Details such as windshield wipers, mirrors, triple single roll bar, and a custom grille were added to make the body more scale. The front bumper is from the Tamiya Clod Buster, while the rear bumper was custom-made by David out of plastic sheet. 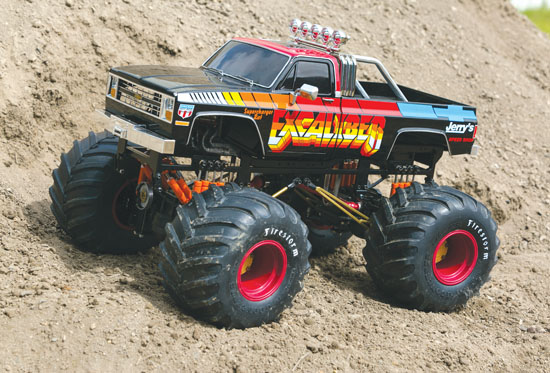 After some custom body work, the body was painted, stickered, and cleared. Accessories like windshield wipers, mirrors, and a roll bar bring it to life.

Leaf-Spring Suspension
Trucks in the ’80s used leaf-spring suspen­sion with a lot of shocks, and Matt went the same direction. Each corner of the truck has a single leaf spring from an RC4WD Trail Finder 2. Damping is done through RC4WD 80mm shocks. Custom aluminum mounts were made to attach the shocks to the axles. Ladder bars were made out of steel square stock that was welded together, and rod ends connect it to the chassis and axle. 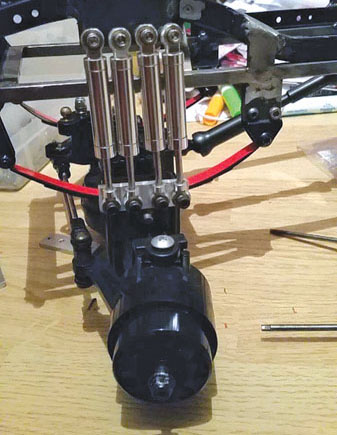 Just like the full-size truck, the mini Excaliber has leaf-spring suspension and lots of shocks.

The Real Deal
Excaliber was the first CAD-designed monster truck, with emphasis on the suspension. Dave Marquart and Mike Nickell, former motocross racers who knew how important suspension was while going over obstacles, used this knowledge to come up with their design. The guys took Mike’s street truck and transformed it into Excaliber in 1984. That version of the truck was sold shortly after the team built their race truck. 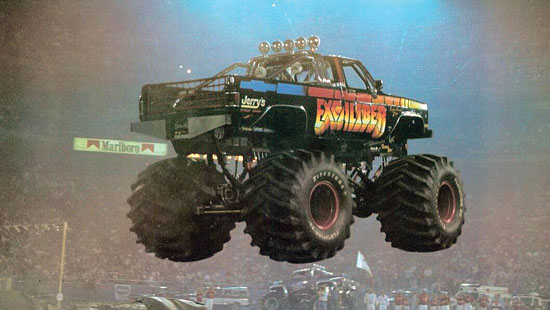 Final Word
Matt debuted the truck at the No Limit R/C World Finals at Diggers Dungeon, and before putting it down for the Show N Shine, he had to finish it on his pit bench. He ended up winning first place in Show N Shine—and the hearts of many, as this truck blew up all over the Internet. Thanks for sharing your awesome build with us, Matt. We’re fans too!