Growing up in the 80s, much of my time was spent sprawled out on the shag carpet of the living room floor watching a ton of television. It didn’t matter which genre, I soaked it all in. Everything from Popeye and Smurfs cartoons in the morning to sitcoms like The Brady Bunch, Happy Days, and Gilligan’s Island in the afternoon. I ate it all up. Plenty shows shown in those days were reruns from the 60s and 70s.

One series of movies that I was delighted to run into whenever they appeared on the seven or so available television channels (there was no such thing as on demand streaming back then mind you) were Disney’s series of Herbie movies. For me, Herbie is always a strong source for childhood nostalgia. 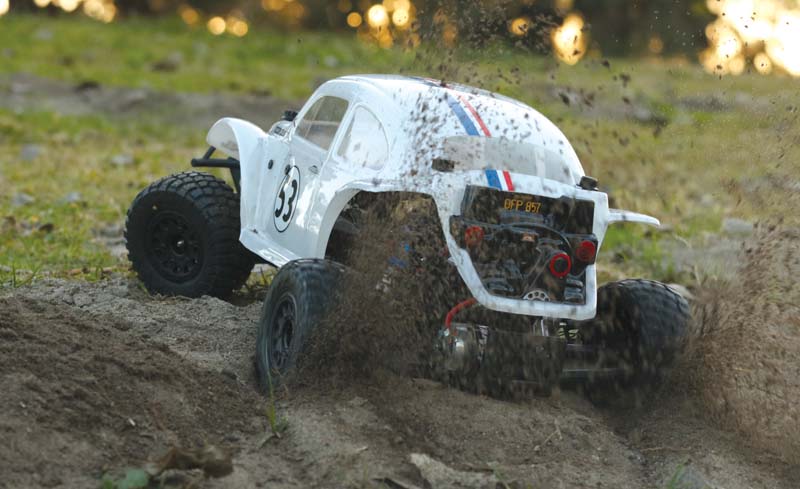 Herbie was a modified for racing 1963 Volkswagen Beetle that had a mind of its own. Little did its hapless driver know that many times Herbie actually drove itself around in the races it was entered. Movie magic delighted this child’s imagination and I couldn’t get enough of the car that seemed to be alive. The Bug appeared in six movies beginning from 1968’s The Love Bug clear through the 70s and on to 2005’s Herbie: Fully Loaded.

Suffice it to say, Herbie has since become an automotive icon, one that has helped elevate the legend of the VW Beetle to even loftier heights. Its red, white and blue stripes, off-white color and large “53” racing numbers are recognizable the world over. Herbie happens to also be the inspiration for the Traxxas Slash 2WD that you see before you.
You may recall in last month’s RCCA, I confessed that up until that point, I never had any experience with the Traxxas Slash. It was my review of the Slash 4WD that opened up my RC experience to the legendary platform. I quickly became enamored with the electric short course truck and wanted to get one for myself to fully deck out. I can’t help but modify anything I get my hands on.

As I looked around, I realized that Pro-Line Racing, a company well known for its incredible line of RC tires and bodies also offers a robust selection of Slash performance upgrade parts. I jumped into the rabbit hole that is the Pro-Line website (prolineracing.com) and started adding parts to the shopping cart.

During this visit to Pro-Line’s website, I noticed that the company makes a VW Baja Bug Clear Body for the Slash 2WD. I imagined how a short course Baja bug would look taking jumps and careening through dirt trails and immediately thought back to the classic Herbie movies I loved as a kid. It was then that I decided to swap the RTR’s stock truck body with a Herbie recreation using the Pro-Line body. A laundry list of parts later, I realized that I was getting way ahead of myself. I still needed to buy a truck to mod out to begin with. 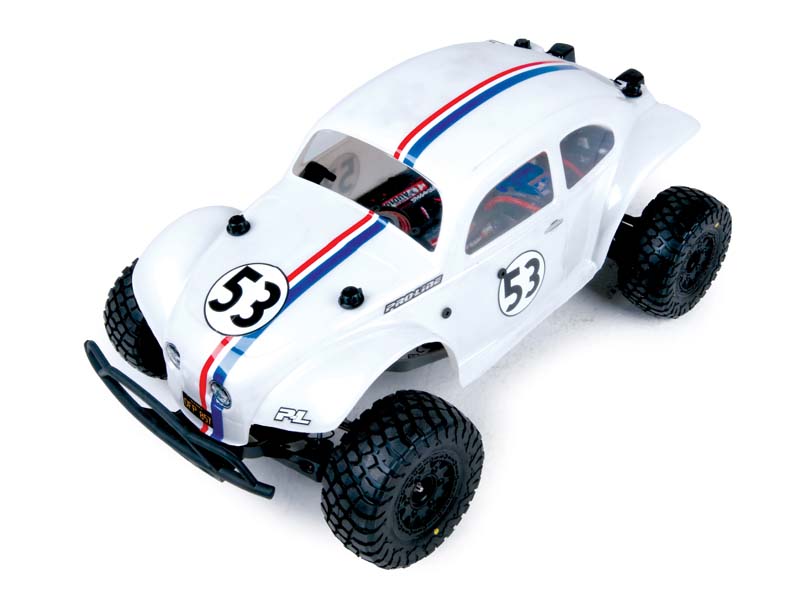 After searching around the net for all the different models of Slash that are available, I decided to buy a 2WD model with Traxxas’ intriguing and fun looking On Board Audio (OBA) technology. OBA is essentially a speaker system that allows the RC truck to sound like a rumbling 900 horsepower V8 short course racer. It may sound gimmicky, but I have to tell you that it’s great fun. The realistic rumbling engine sound is linked to throttle control so the OBA’s sound module produces prodigious amounts of engine noises that are timed to your throttle inputs. I absolutely love this feature.
I quickly realized that the Traxxas Slash 2WD OBA model was unavailable from traxxas.com at the time I looked, so I did a local hobby shop search for it. Luckily a few phone calls later, I located one at a store about a 45 minutes drive away. I quickly headed over there to nab it.

The Traxxas Slash 2WD OBA I bought is a ready to run (RTR) kit that comes with the OBA equipped Slash complete with a pre-painted and detailed short course truck body, a TQ 2.4 GHz radio transmitter, Power Cell 7-cell NiHM iD battery, and 4-amp peak detecting DC fast charger. Everything I needed to get running was included in the box. After unboxing it, I placed it on a shelf and impatiently awaited the bevy of Pro-Line parts I ordered to arrive.

I began disassembling the Slash as soon as the Pro-Line upgrades arrived at my doorstep. Never having modified a Slash before, I have to say that I can see why the vehicle is so popular. Its design is intuitive and its materials are top notch, which makes the truck incredibly friendly to work on.

Using Pro-Line parts, I revamped the truck’s suspension as well as steering components. As great as the stock Traxxas parts are, Pro-Line’s upgrade parts do help beef up high stress parts and help bump up overall performance as well. Pro-Line’s Pro Spec aluminum shocks were installed, as were ProTrac shock towers. These units give the already smooth riding Slash even more dynamic dampening characteristics. Further strengthening the suspension and steering are a set of front and rear PRO-Arms and aluminum caster blocks.
Another major upgrade was done to the transmission. A Pro-Line PRO-Series 32P Transmission was swapped in place for the stock unit. The pre-built PRO-Series includes a 32P 56-tooth spur gear that makes stripping gears a thing of the past. All the internal gears inside the transmission are made from hardened steel to handle upgraded power. The transmission also features an updated case for enhanced strength and an aluminum motor mount with clear gear cover. A Robinson Racing 32P 15T pinion gear completes the new transmission set up.

All along the way, I replaced some of the standard hardware with stainless screws from RC Screwz. I also swapped out any plastic bushings I came across with shielded ball bearings. Both the screws and bearings are offered as Slash 2WD specific kits by RC Screwz.
One cannot go with a Pro-Line build without also mounting a set of its legendary wheels and tires. For Herbie, I chose a set of Pro-Line’s pre-mounted BFGoodrich Baja T/A KR2 SC, which is designed for short course truck applications. The tires come in Pro-Line’s popular M2 compound and come pre-mounted to Raid Black 6×30 removable hex wheels. The scaled-down BFGs feature large tread blocks with swooping cuts and sidewall treads for impr4ssive grip.

Now that the Slash was set up how I wanted it, I turned my attention to making it look more like Herbie. I ordered up decals from a custom decal maker in Canada called MCI Racing. If you haven’t had the pleasure of using their high quality decals yet, you’re missing out. I was in luck and saw that they offer Herbie-style graphics already in 1/10-scale.
I looked up the original color of Herbie and from what I could figure, the Bug was originally finished in pearl white. I soon realized that I wasn’t going to get the color completely screen accurate, but I did locate a couple of cans of pearl white spray paint from Tamiya.

After trimming and painting the Pro-Line VW Baja Bug body, I applied a few of the detail decals that came with it such as its headlamps and door handles. I then proceeded to apply the custom printed MCI Herbie decals. Once the iconic red, white and blue stripes were laid down along with its racing numbers, the look really came together. When completed, the body was installed and the short course truck became a short course Bug.

The original Slash OBA truck body has two speaker mounts with speakers attached to them that are factory mounted to the body. Since I wanted to retain the speakers I had to find a way to relocate them to the Beetle body. Due to the different contours of the bodies, I was only able to transfer one of the speaker mounts to the Volkswagen body. The other speaker was double stick taped to the chassis without the use of the original mount. 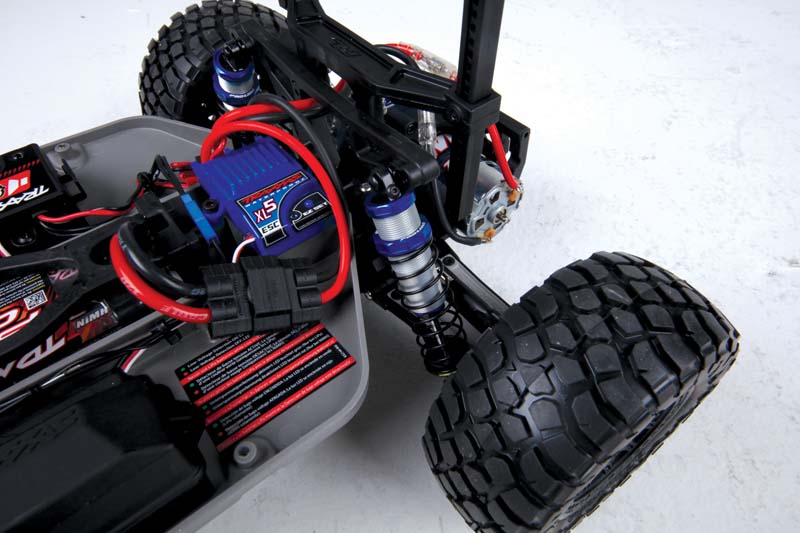 Pro-Line’s Pro Spec aluminum shocks were installed, as were ProTrac shock towers for effortless running over rough terrain. A Traxxas brushed system including a Titan 12T motor and XL5 ESC provide
the power. 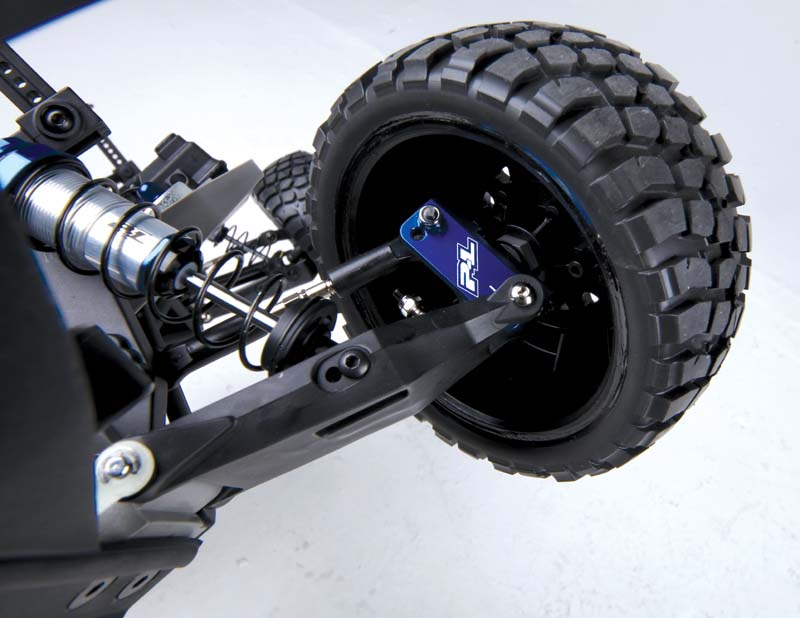 Suspension and steering stengthening are provided by Pro-Line’s PRO-Arms and aluminum caster blocks. 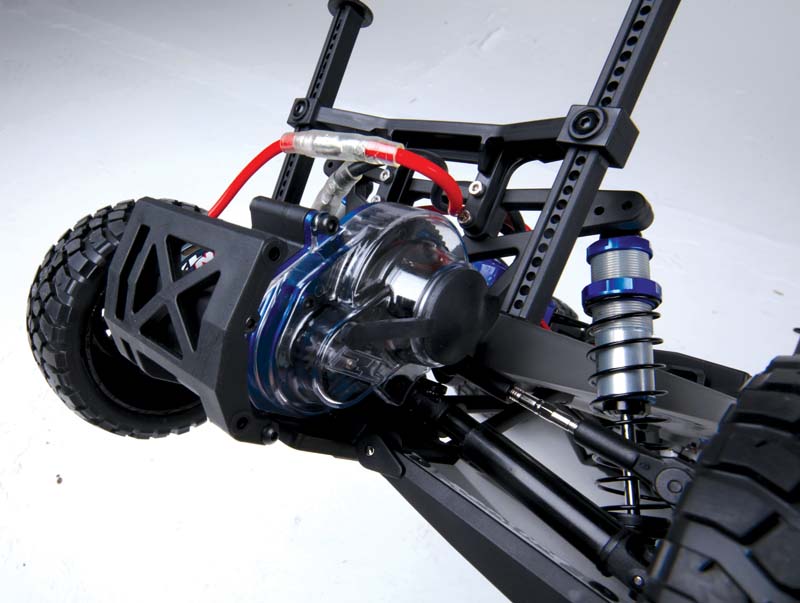 With Herbie the Short Course Bug complete, I headed to a local park to see what it could do. With its OBA rocking and rolling, the Bug really made heads turn. Sounding like every bit the 900 horsepower racer, Herbie blasted through the grass and tarmac and jumped over dirt berms with as much gusto as its big screen inspiration.

It was immediately evident that the Pro-Line upgrades turned what would otherwise be a base model Slash into one that is even more capable and durable than it was before. The smooth riding shocks and robust transmission really give you the confidence to take on most any terrain and driving situation.

The OBA control module has a volume control and I cranked it up to maximum. Talk about head turner, people who came across Herbie instantly smiled and even walked up to me and started reminiscing about the different Herbie movies to me while I was bashing about. All in all it was a fun, problem free first outing with the Herbie-fied Slash. 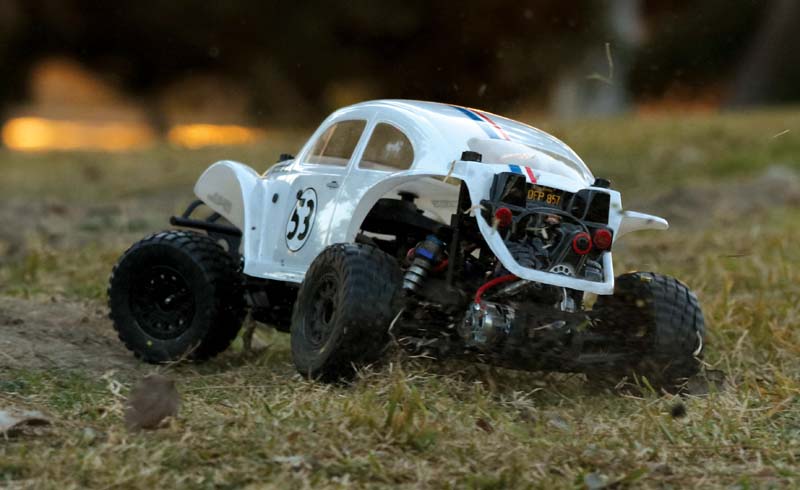 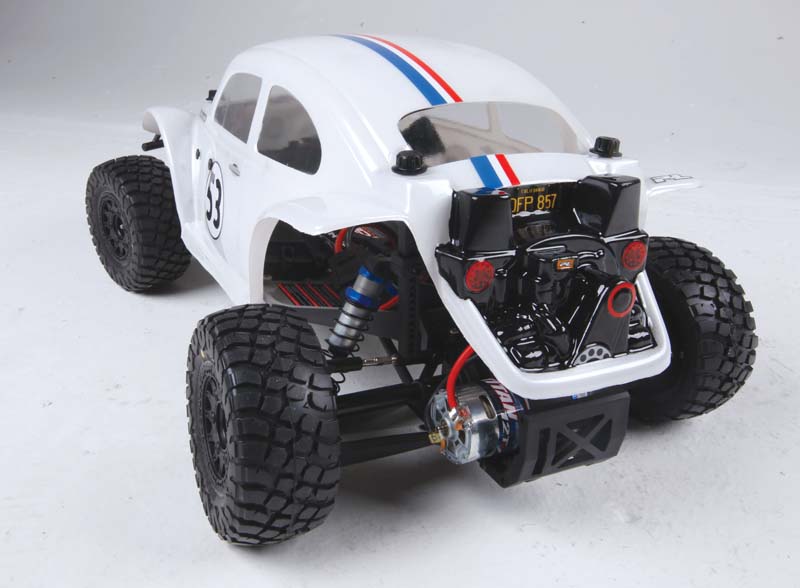