If you’re into off road racing, there’s little doubt that you’ve heard of the rocky mecca known as The King of Hammers. The famed annual race held in Johnson Valley, California is home to a unique kind of competition known as Ultra4 Racing. Ultra4 (U4) vehicles are built to purpose for extreme off road competition and are capable of speeds over 100 miles per hour over rough and unpredictable desert terrain and are still capable of the most technical rock crawling one can encounter.

Suffice it to say, U4 vehicles are the ultimate expression of off road power and technical expertise. Being both real life and RC off road enthusiasts, the team at Losi felt that it only made sense that they brought the U4 experience to RCers. We gladly concur with them. Losi teamed up with U4 team Lasernut Racing to scale down their real life off road competition machine to 1/10-scale. The Losi Lasernut U4 2.2 is a ready to run (RTR) off roader that takes off road performance and scale looks as serious as it is fun to drive and look at. 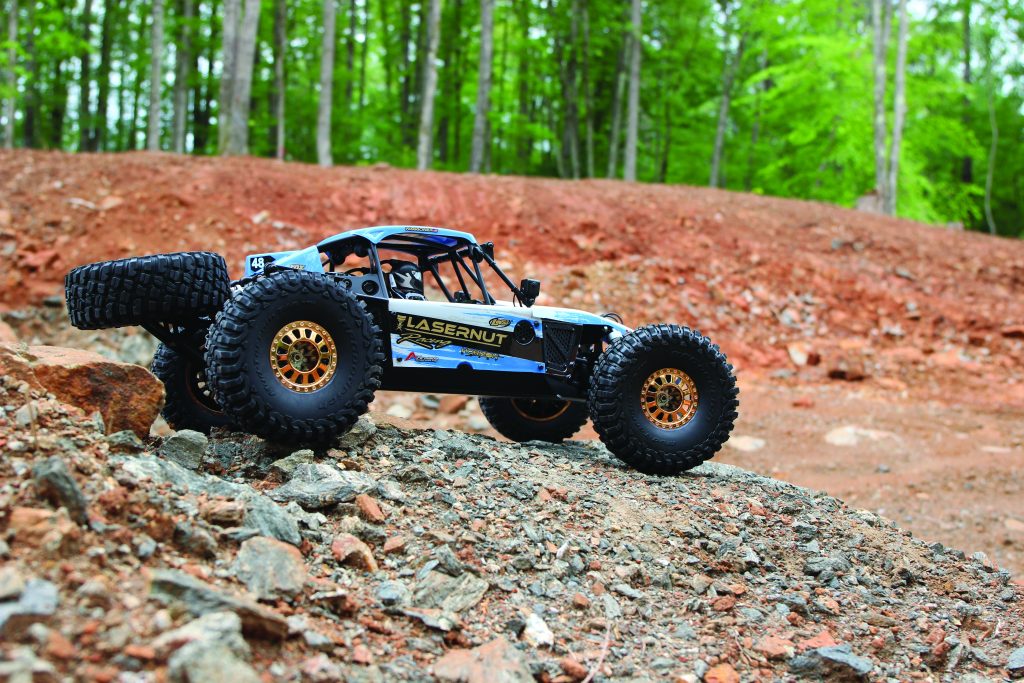 By basing it on Losi’s capable TEN platform, the Losi designers had a bit of a head start on the development of the Lasernut, but they still had some way to go before it would see the light of day. It would’ve been too easy and unfair to consumers to simple slap on a U4 style body on the TEN chassis and go to market. No, that’s not how they do it. Losi worked to make the Lasernut not only look scale correct, but also wanted to incorporate features that make it unique and a true (albeit smaller) U4 performer.

In order to get the correct dimensions, the designers stretched out the chassis so that it drives just like how a scaled down U4 racer would. The stretched look also keeps the Lasernut looking scale correct and allows it to rock giant 145mm tires, which we’ll get into later on. The result is an impressively big 1/10-scale rock racer. It’s long, measuring over 2-feet in length and endowed with a wheelbase of 14.75-inches. We have to say that unboxing it was fun to do due to its sheer size. 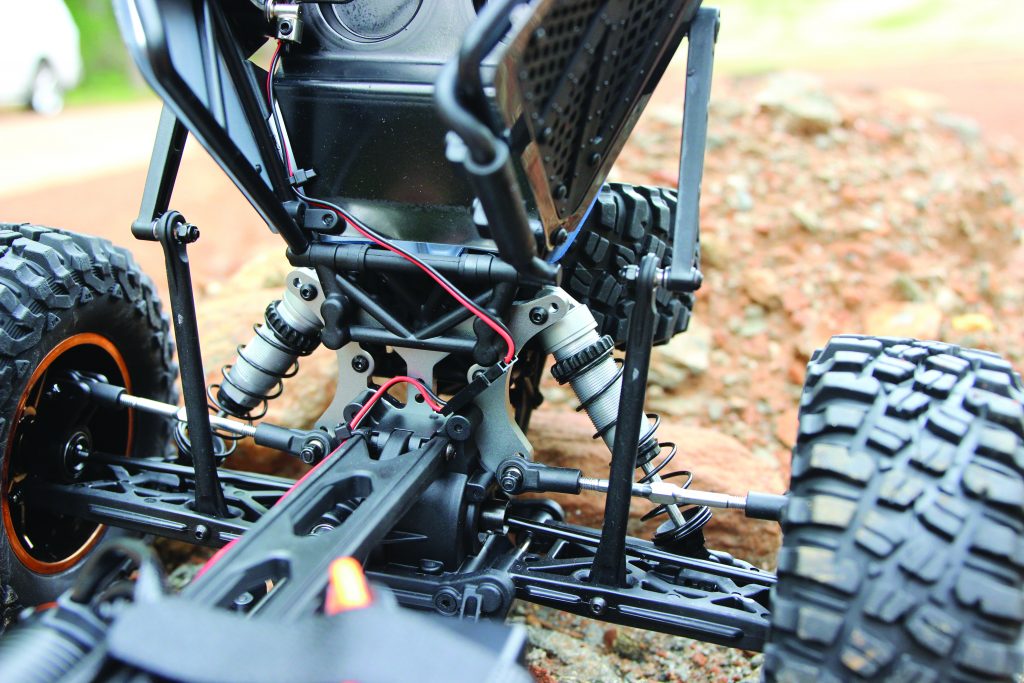 Lasernut’s chassis isn’t only stretched, but is made of a tough and 3mm thick sheet of aluminum that can deflect rocks that it glides over. The high-performance chassis has the ability to adjust its independent suspension and drivetrain for any trail or course condition. Surrounding the chassis is a Lasernut race inspired scale roll cage that has a neat flip-up cage feature for easy access to the battery. By undoing the two body clips at the front of the Lasernut, the body pivots up from its rear straight up to reveal its inner workings. This is

of note because it makes battery changes so easy. It also keeps lighting wires tucked away with nothing to unplug when the body is released. Did we say lighting wires? Yes, we did.

The Lasernut hits it out of the park in terms of scale features. Not only does it have a working LED light bar on its roof, but it also has amber colored light pods just forward of the cockpit too. Lights always look cool on an RC. Speaking of cockpit, you’ll notice that it is fully detailed and includes a pilot and co-pilot figure replete with flexible air hoses for their helmets. This is a feature that real Ultra4 racers require when racing in the dusty desert. We love that the Losi designers included that neat feature in the Lasernut.

Lexan body panels are attached directly to the roll cage; similar to how real life U4 vehicles have their body panels mounted. On top of all this scale-ness, hard plastic details are also mounted throughout the body to give it a true scale appearance. We found that thanks to its cage based body, any superficial damage is hard to visually detect and the Lasernut keeps looking new even after more than a few rollovers.

Under its skin, you’ll find this rock racer is capable of accepting 4S power LiPo batteries, which means this desert racer is made to be quick. The included Spekturm ESC is waterproof, completely programmable and comes pre-wired with a high-current IC5 connector. For those who like options and upgrades, the ESC will work with most sensorless brushless motors and is 3S and 4S LiPo compatible. The Lasernut comes loaded with waterproof electronics including a Spektrum branded receiver, servo and the aforementioned ESC. Everything is sealed against the elements allowing you to splash in the rain, spin in the mud and make tracks in the snow. It’s full-throttle freedom to run anytime, rain or shine.

Handing all the uneven terrain is a set of proven coil-over oil filled shocks with pre-load adjustment. The vehicle’s adjustable oil filled coil-over shocks can be found on all four corners in order to soak up even the toughest of terrain. The aluminum threaded 12mm oil-filled shocks are fully adjustable and allow you

to tune the handling of the Lasernut U4 to maximize suspension performance. The shocks are mounted to 4mm thick 6061-T6 aluminum shock towers that are adjustable and built to withstand tons of punishment. Keeping the racer stable over big bumps and extreme turns are front and rear sway bars. These sway bars

are fully adjustable and help you push the Lasernut U4 to its limits. We like how it comes with adjustable turnbuckles for added adjustability and tune-ability.

One of the most eye-catching features is also one of its biggest performers too. We’re talking about its oversized wheel and tire combo. Lasernut sits on a set of scale licensed Raceline 2.2 racing wheels and BF Goodrich M/T tires. The legendary BFG tires feature an aggressive tread pattern that handles any terrain at any speed. Looking to go flat out over some dirt? These tires can handle it. Need to take on a technical rock crawling section? Look no further than these giant BFG M/T’s to do the job. If you’re wondering why the wheels are finished in a rose-gold chrome look, it’s because the real life Lasernut U4 racer sports the same wheels in that color. We dig it.

Driving this beast is a full-time four-wheel drive system that provides increased traction and handling. It utilizes three oil-filled differentials, located in the front, center and rear. Each of the differentials can also be tuned for various conditions giving the Lasernut incredible off road flexibility. Motivating the entire endeavor is a brushless Spektrum Firma 4-Pole 1900kv 550 motor that is rated to take the Lasernut up to an incredible 50 miles per hour on a 4 cell LiPo.

With all this power, it can be said that the Lasernut can get squirrely when its throttle is mashed wide open. This is where Spektrum’s Active Vehicle Control (AVC) comes in to save the day. Included with this ready to run vehicle is a Spektrum DX3 Radio System. The DX3 radio offers advanced features like AVC, a 3-position throttle limiting switch and travel adjust. The receiver’s built-in AVC traction control system works behind the scenes, making hundreds of throttle and steering adjustments per second, so more of the motor’s power is translated into ballistic speed and acceleration instead of just flying dirt. Like traction control in your full-scale vehicle, you can activate or deactivate the system on the fly and adjust the level of stability based on driving conditions. Any RC vehicle can go fast and with AVC you can go faster while maintaining optimum stability in all driving conditions.

The DX3 remote also has a switch that allows the driver to limit maximum throttle input from 100 to 75 and 50-percent. This helps when driving in low traction terrain such as snow or in small areas such as the backyard. We love this feature when allowing the little ones to drive the vehicle. Limiting the max throttle output to 50-percent allows us to rest easier, that and running a 2S battery in it while doing so. 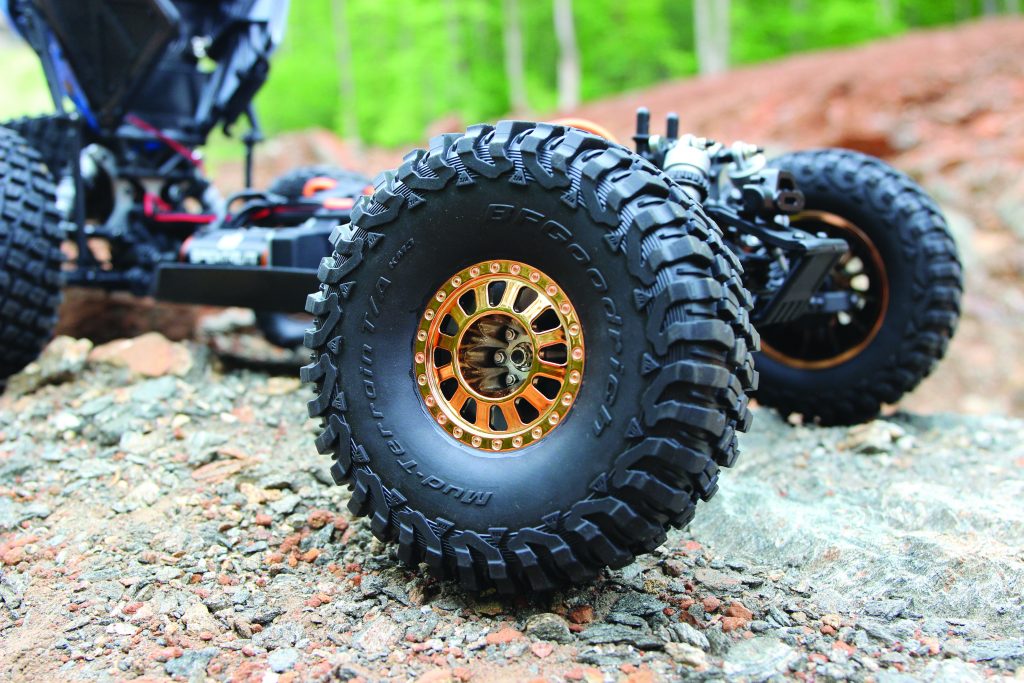 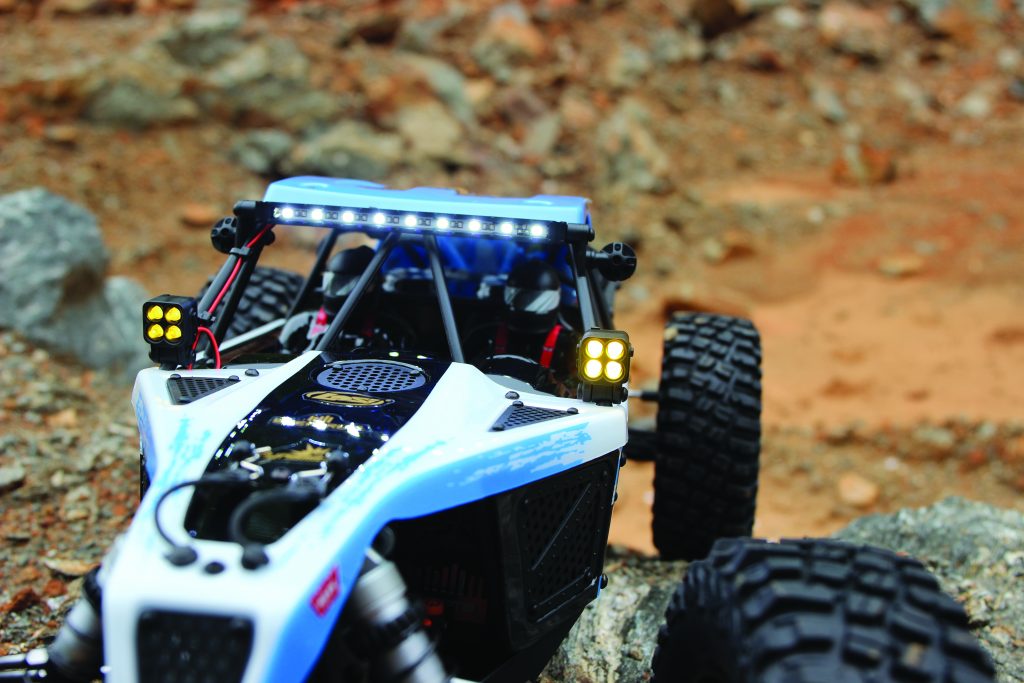 With a working LED light bar on its roof and amber colored light pods just forward of the cockpit, the Lasernut’s built-in lights really add to its scale looks. 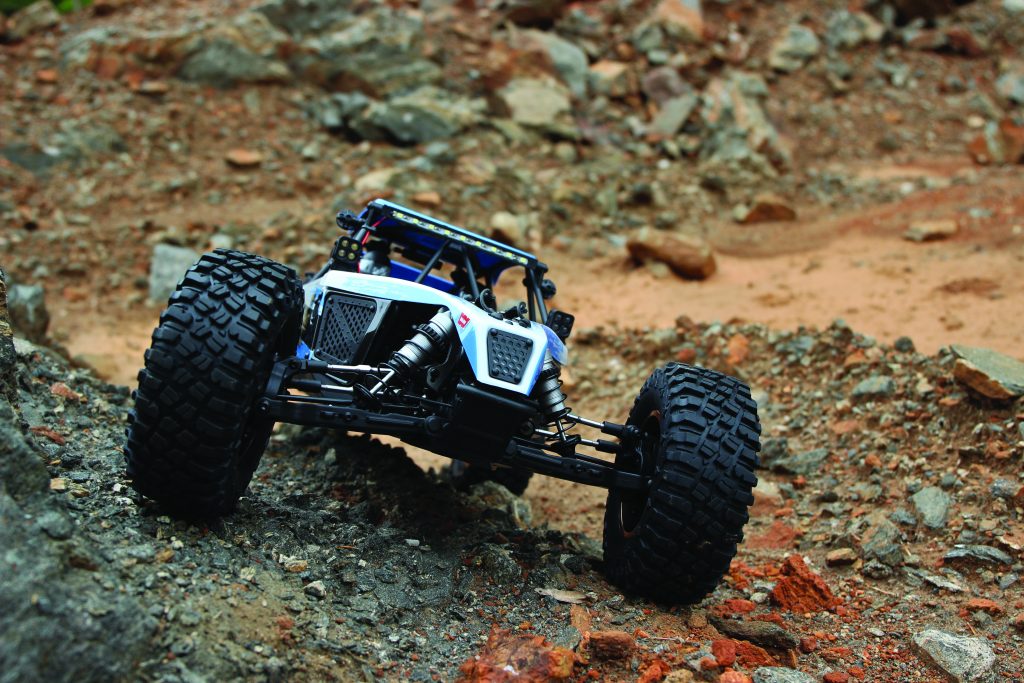 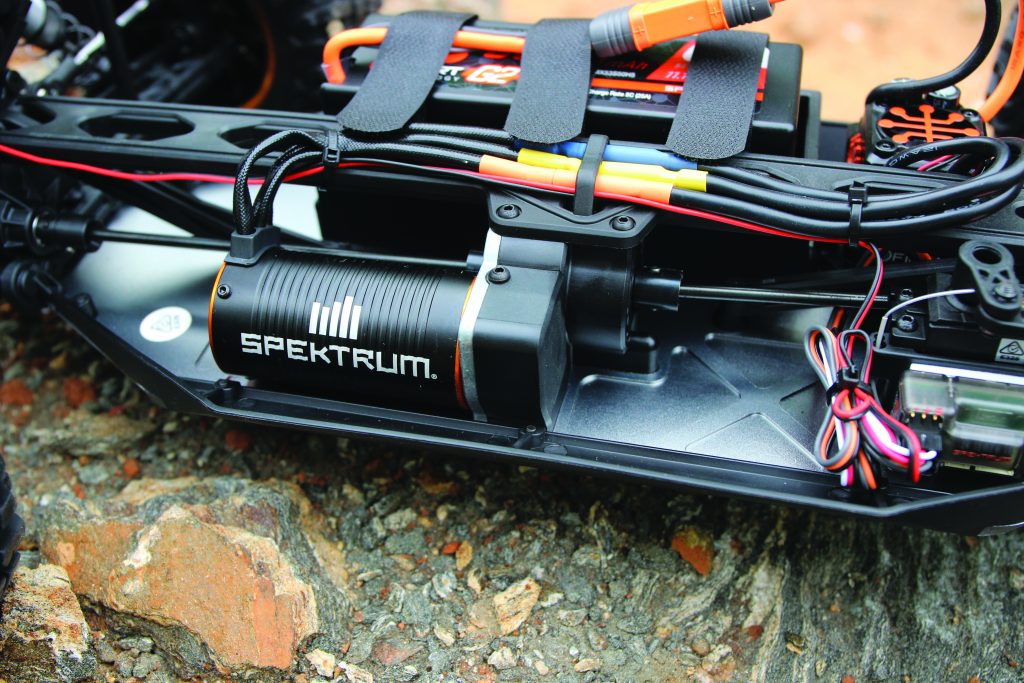 This rock racer is powered by
a brushless 19000kv motor and can handle 4S LiPo power.

The chassis layout is efficient and well-balanced.

We headed out and found some off road terrain to see how the Lasernut U4 2.2 ran. We brought along both 3S and 4S batteries to allow for plenty of run time. As we figured, the Lasernut is a powerful beast. Powered by a brushless 19000kv motor and rocking 145mm diameter tires right out the box, it’s an impressive RTR kit for sure. At distance we swear that we were looking at the real thing and its LED lights made it look even more real.

This rock racer easily jumped and glided over rocks of even moderate size even at speed. Even while using the 3S, it was very quick, but when fed the 4S battery, the Lasernut found another gear. This thing is seriously fast. Both batteries lasted longer than the 45 minutes we drove on each battery. Thanks to Spektrum’s

Smart technology, we were able to monitor battery life directly from the controller. We did note that there’s a trade off between speed and handling. We would like the Lasernut to be able to turn a bit sharper when taking fast sweeping turns but that wasn’t in the cards for us. Perhaps if we made a few adjustments it would have helped, but we were having too much fun to bother.

After plenty of full speed blasts, we brought it in for some technical work. We wouldn’t replace our traditional crawlers with the U4 racer, but that’s not what its all about. While we found it very capable on some technical trails its main strength is powering through wide open spaces quickly and we found that very satisfying. The stretched out wheelbase is great for keeping it stable. 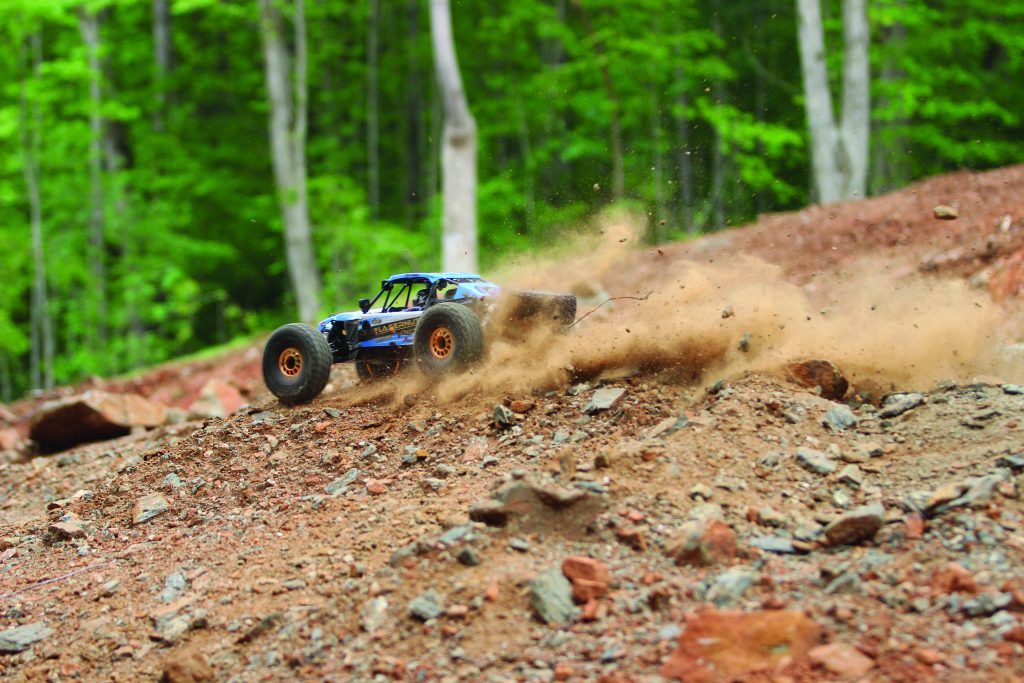 We wouldn’t replace our traditional crawlers with the U4 racer, but that’s not what its all about. 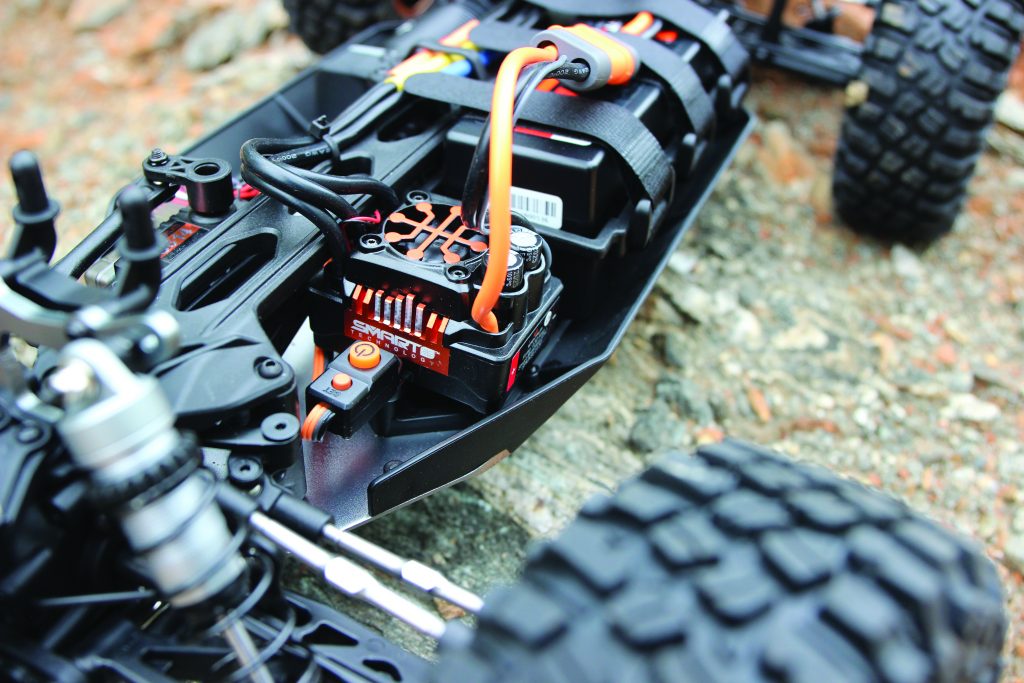 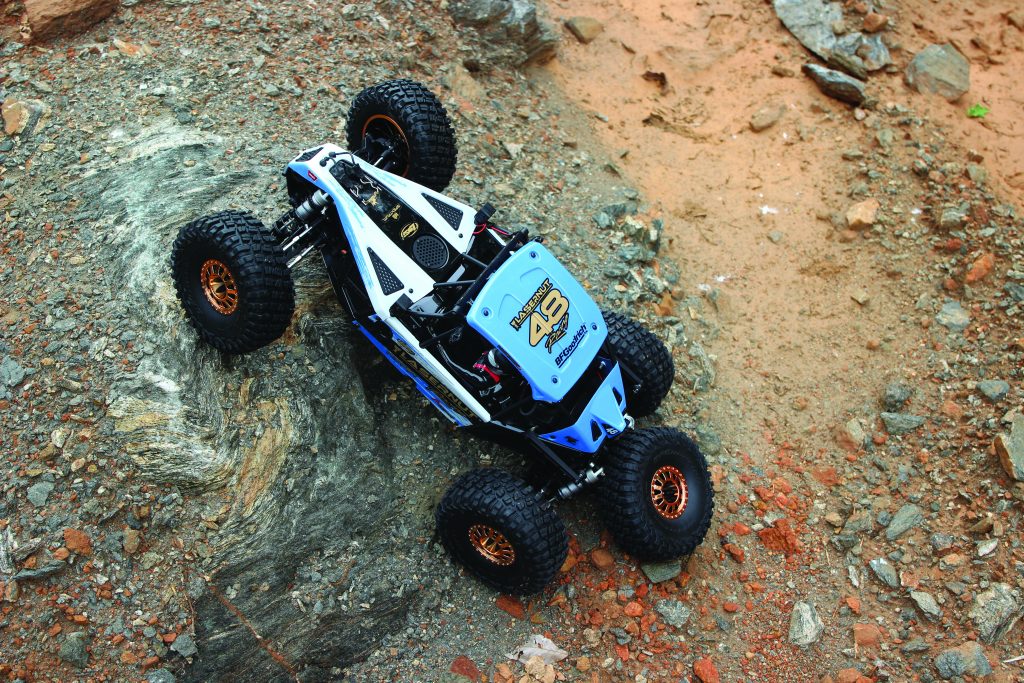 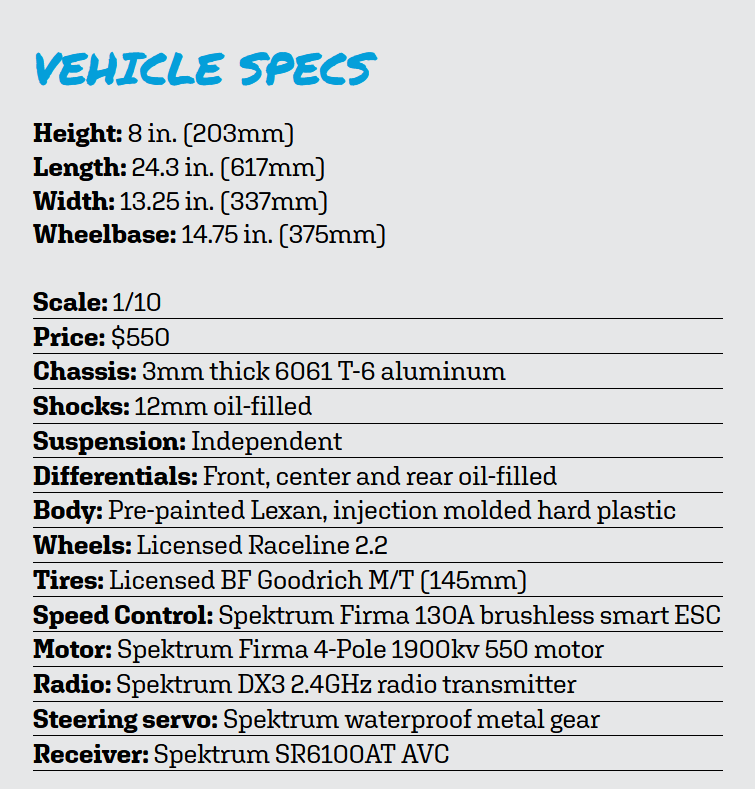 We love this thing. The Lasernut not only looks great, but it is powerful, stable and is packed with many driver friendly features such as Spektrum’s AVC traction control system and a pivoting body that keeps wires at bay. We are impressed with the lengths that Losi went to keep this scale version of the famed desert racer as accurate as they did. If you’re looking to recreate your own U4 race, you’ll want to take a good look at this purpose built rock racer.