RC boats look fast and fun from the shore, but they can seem foreign if you’ve never run on water before. But don’t worry—we’re here to demystify marine RC for you. We’ll explain a few basic concepts about boats—the different hull types, and how and where they work best—to help you pick your ideal first boat. We’ll also give you some essential tips that are good with any hull style to help it perform its best from your very first time out. If you’re just getting into marine RC, you’re probably going to want to start with a ready-to-run (RTR) boat, so that’s what we’ll focus on here (but these principles apply to DIY kit boats as well.)

You can divide almost all performance boats into one of three categories: deep-V monohull, cata­maran (cat), and hydroplane (hydro). Technically, a cat and its smaller cousin, the tunnel hull, are types of hydro, but for our purposes, we’ll talk about them separately because they look and handle very differently. Just like when choosing the type of RC car or truck, deciding which hull type is right for you is as much about the type of “terrain” you’re going to run it on as it is about the styling.

This type of boat gets its name from the shape of its hull, which looks like a V when viewed in cross-section from the front. That V shape slices deeply into the water, providing lots of stability in rough conditions, making this the most versatile and forgiving boat to drive. It can be trimmed to skim the surface to go fast on smooth water, but it is usually a tick slower than a cat or a hydro in those conditions. Think of a deep-V hull as the boat equivalent of a monster truck: good over bumps but a little slower on smooth surfaces. 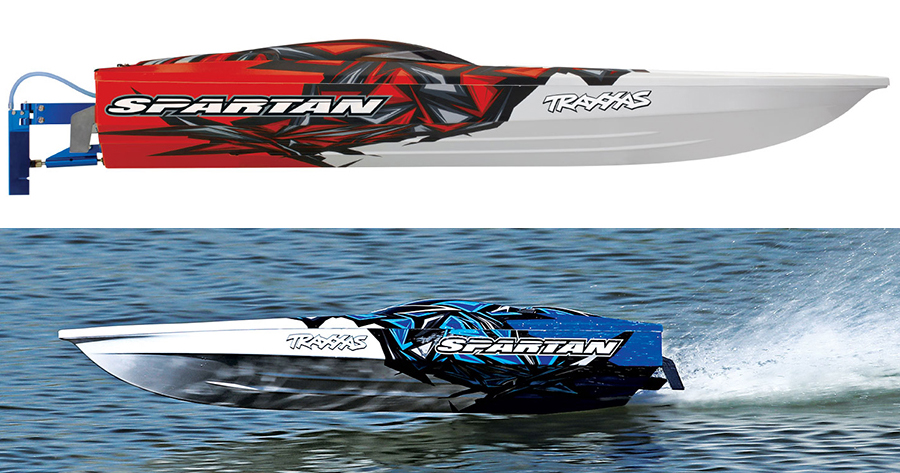 The Traxxas Spartan is the quintessential example of a high-performance deep-V monohull. The sharp angle of the bow can cut through choppy waves effectively, but it can be trimmed out to run fast on smooth water.

In cross-section, a cata­maran looks like two hulls connected by a bridge, forming a tunnel down the middle. That tunnel reduces the amount of surface touching the water and helps lift more of the boat up out of the water (called “getting up on plane”), further reducing friction. A cat doesn’t handle rough water quite as well as a deep-V hull, but it turns better, and it is still quite forgiving thanks to the two outer hull sections—called “sponsons”—which are set wide apart to enhance stability. Think of a cat as a short-course truck or rally car: pretty good on a variety of surfaces. 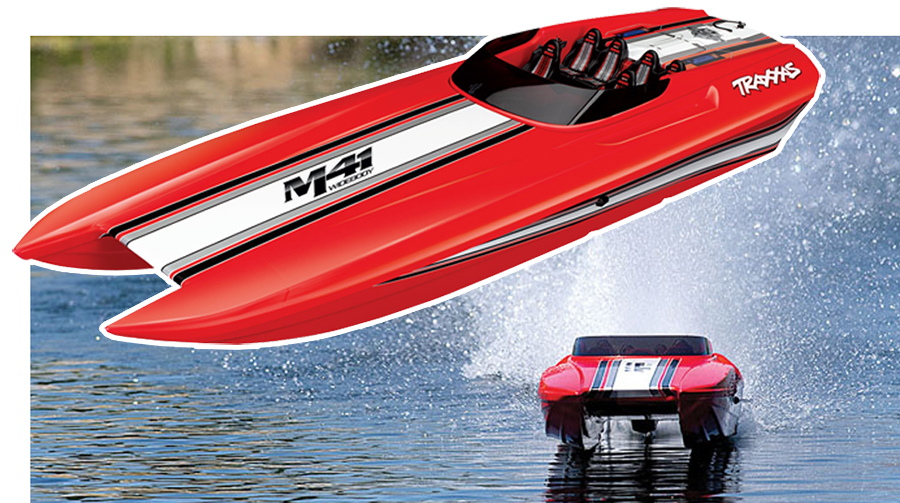 The M41 catamaran from Traxxas demonstrates the advantage of a cat design. The full-length center tunnel gets much of the mass of the hull up out of the water to reduce friction and maximize speed.

A hydroplane looks cool and is, by far, the fastest hull type, but it is also the most sensitive, so you’ll want glassy-smooth water to get the most out of it. It is sometimes referred to as a “three-point hydro” because, when trimmed out correctly, it will glide over the water seeming to balance only on three points: the back edge of the two sponsons and the prop. This requires careful tuning to get it balanced, so it tends to be better suited to boaters with some experience. Think of a hydro like a competition touring car. 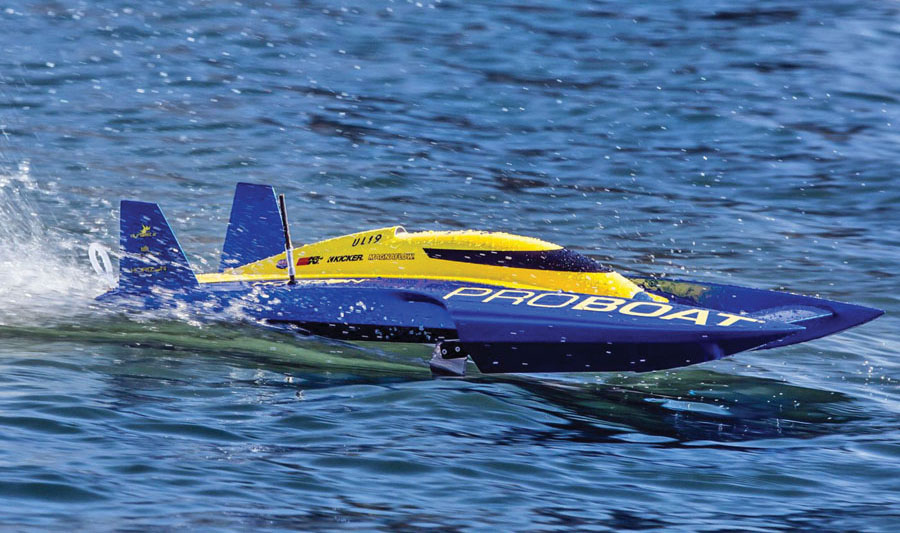 A hydroplane, like this Pro Boat UL-19, looks great and can be very fast, but it is sensitive to tuning and water conditions. This is about the roughest water in which you’d want to run a hydro.

RC boats are made out of a variety of materials, but they generally fall into three groups: plastic; composites, such as fiberglass or carbon fiber; and wood. Wood is usually reserved for scale boating, so we’ll focus on the other materials here.

Plastic (typically ABS) hulls are the most common type for RTR boats and perform well. Plastic hulls are lightweight and durable, and more affordable than fiberglass. For general fun running, ABS hulls work great, and some of the fastest RTR boats on the market (such as the Traxxas Spartan and M41 catamaran) have plastic hulls. 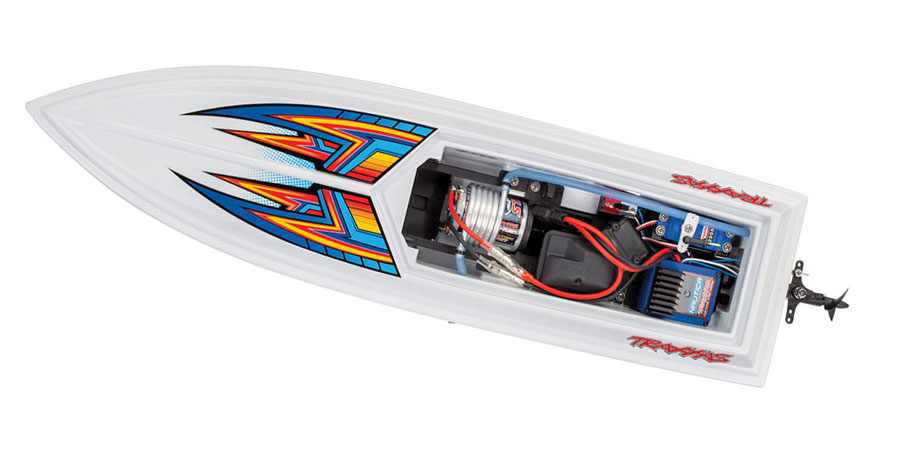 The Traxxas Blast is a good example of a thermoformed plastic hull. Thin plastic is reinforced with a foam layer between the inner and outer hull,
adding strength and also internal flotation.

Fiberglass is strong and provides the best-quality finish for paint, and it holds up the best against fuel spills, which are inevitable when running nitro or gas. Fiberglass can range in thickness—thin is light but can flex, and multilayer fiberglass is stronger and more rigid but can be somewhat heavy. Fiberglass also has the advantage of being repairable.

Carbon fiber is very strong and light, but also expensive. It’s most appropriate for race boats, where lightweight strength is critical, but can be found on high-end RTRs. It is not repairable in most cases. 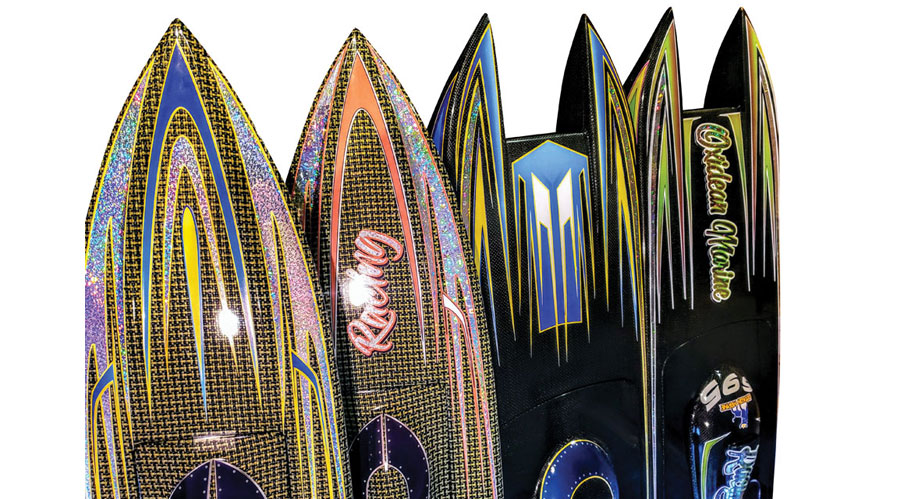 Carbon fiber is a favorite material for race boats because of its lightness and extreme strength, but it is expensive. Some companies do offer it on high-end RTRs, like these hulls from Oxidean Marine.

Just as with RC cars, when it comes to powering your boat, you’ve got three choices: electric, nitro, and gasoline. The advantages and drawbacks are also pretty much the same.

• By far the simplest and most affordable type of power system
• Reverse capable—adds maneuverability, which is even more important when you cannot walk over to your vehicle like you can with an RC car
• Power density—the fastest boats on the planet are electric
• Run time is limited even with large-capacity batteries
• Electricity and water don’t play well together, so careful waterproofing is more important than with RC cars and trucks 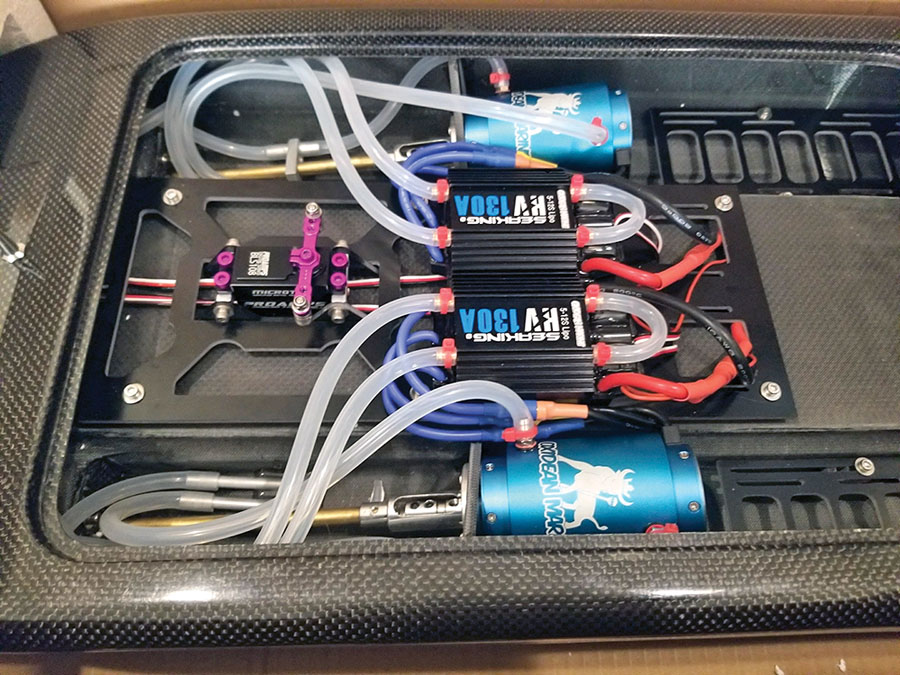 Marine electric motors provide huge bang for the buck, being the fastest and most affordable type of power system. For boat duty, motors and speed controls are often fitted with water-cooling jackets.

• Screaming sound to go with screaming speed
• As powerful/fast as electrics in many RTR applications
• Run time exceeds that of electrics
• Proper tuning is essential—a flameout on the water can require complicated retrieval
• Nitro boats don’t like to idle—coolant flow requires velocity; a stationary nitro boat can overheat quickly 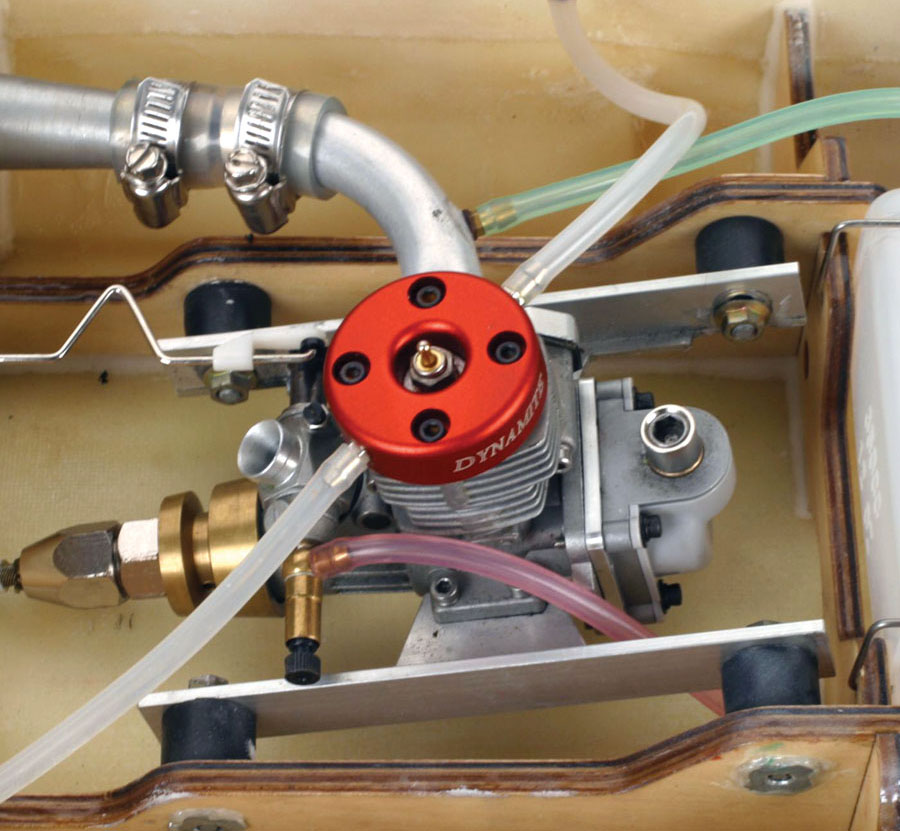 Nitro engines match the speed of electrics in many RTR applications, and the run time is better. Tuning can be challenging, and nitro boats need to keep moving to maintain coolant flow or they can overheat.

• Tried and true—boat pioneers have been running ultra-reliable 23–30cc “weed-whacker” gas engines for decades
• Easier to tune than nitro, and fuel is much less expensive
• Sheer size, deep-throated sound, and low-rpm grunt make gas boats the most realistic driving experience
• Big boats = big $$
• You need a big pond to get the most out of a gas boat 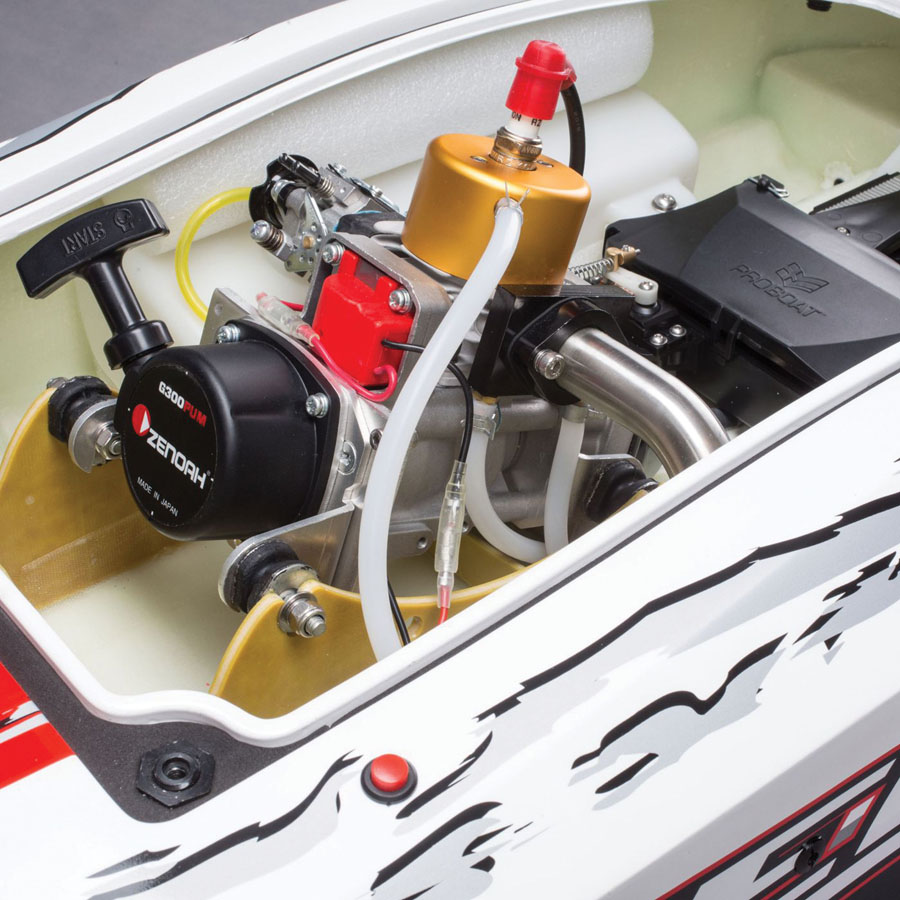 Gas engines, like the 30cc Zenoah in this Pro Boat Zelos, are super reliable, and driving gas feels the most realistic to full-size boats. But gas boats are big and pricey, and need a lot of open water.

Just like a car, many boats can be adjusted to handle better according to water conditions and driver preference. In general, when water is smooth, you want the boat to run at a flatter angle for maximum speed. When water is rough, you want to run a little nose-high to add stability and help the boat bound over waves and chop. There are three basic adjustments to achieve that:

This obviously applies to electric boats, but shifting the weight balance by moving batteries fore or aft is one of the easiest ways to adjust ride angle: Forward brings the nose down; back brings the nose up. 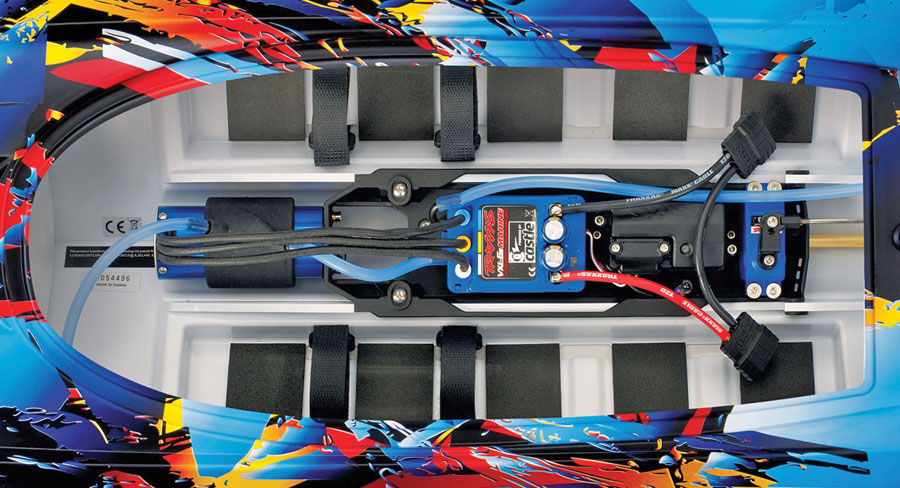 Long battery trays, like the ones in the Traxxas Spartan, leave lots of room to move the packs fore and aft to get the weight balance just right.

Think of these as spoilers for the water—except in reverse. Mounted on the bottom edge of the hull’s rear end (transom), they push down on the water to raise the back of the boat and drop the nose, causing the boat to ride at a flatter angle. A little goes a long way, so make small, progressive adjustments until the boat rides like you want it to for the conditions. 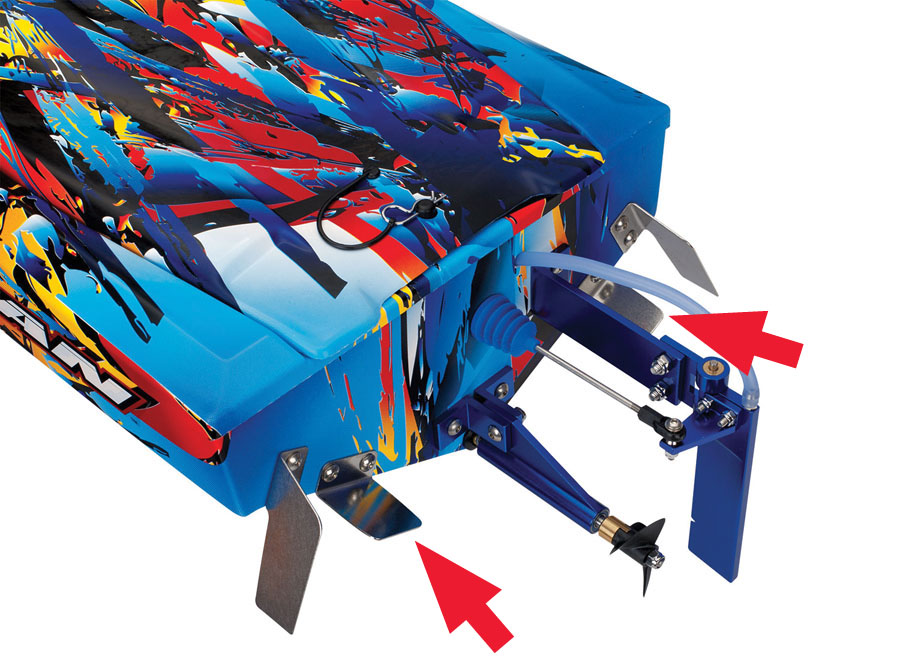 Angling trim tabs downward deflects water to help the rear of the boat ride slightly higher, bringing the nose down and increasing speed on smooth water.

Some boats allow you to change the angle of the prop itself. This can be in combination with, or in lieu of, other tuning methods, and changes to the prop angle have an effect similar to the trim-tab angle. It is generally better to keep the prop angle as straight as possible to minimize stress on the driveline, so do minor adjustments first with the trim tabs or battery placement. But if the handling is way off, a subtle adjustment to the prop angle may help. 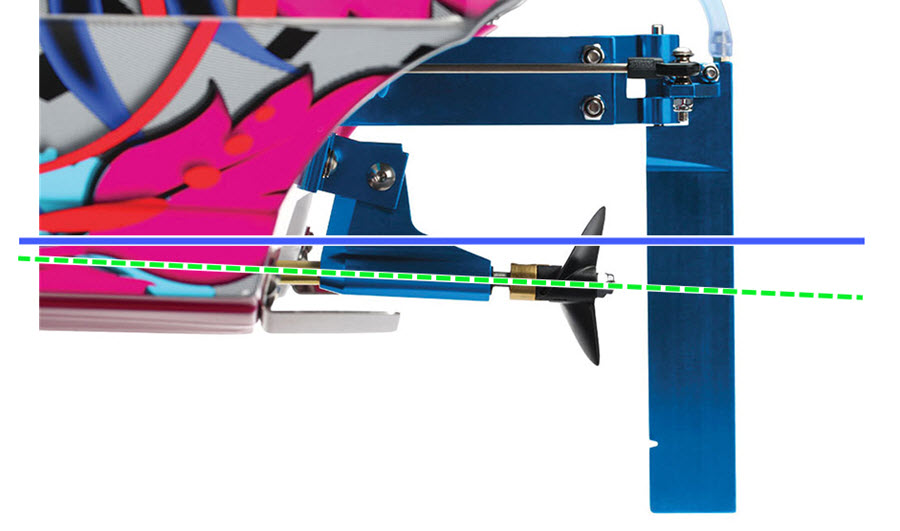 The prop angle works similar to the trim-tab angle: Downward helps raise the boat, while upward raises the nose. Changing this angle can put stress on your drivetrain, so use this adjustment only after you’ve tried the others.