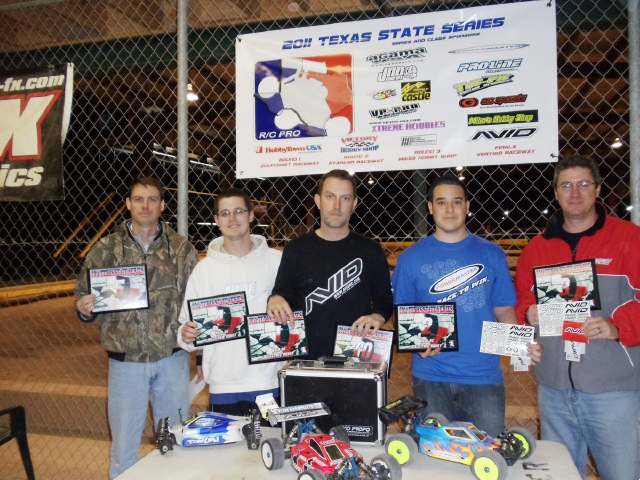 The first round of the RC Pro Texas State Series held at Mike’s Hobbyshop in Porter Texas had some of the fastest drivers around coming to compete and kick off the series right!

This was David’s second outing with his RC8B’s and continuing with his success from the previous week at the Icebreaker, David Joor took home 1st place in both electric 8th scale buggy and nitro 8th scale buggy. Qualifying went very well taking TQ in electric and 2nd in nitro. It wasn’t till the last round of qualifying that David found the correct tire/foam/wheel package where he ran the fastest qualifying times of the race by 4 seconds over Xray/Avid’s Jason Branham. To show the consistency of the RC8B’s, in round two David ran 12 5:02 in both buggies and in the final and 3rd round in which he ran 13 5:15 in both buggies! With qual points used out of 3 rounds, Branham had TQ’d secured from his dominate runs in R1 and R2 in nitro buggy. David had this to say :

“It felt great to have all my mains run with no bobbles and equipment running flawless and to have a home with AE/REEDY/AKA/TEKIN where I feel the most confident I ever have.”