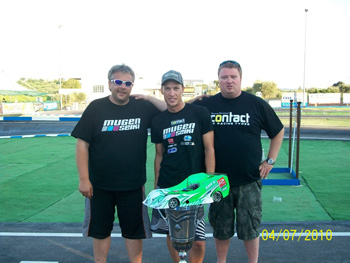 Robert was using the Contact tyres line and always looked the fastest on the demanding track.

For the final Robert chose to start with brand new tyres straight out of the box because his car worked really well with large diameter tyres. This strategy proved to be the right one and Robert led the race from the first lap, completing a tyre change after 24 minutes and at that point he had a lead of one lap over Dario Balestri.

After the 45 minutes of hard racing Robert became the new European champion in 1/8th on road with his Mugen MRX-5 powered by Novarossi and gave Contact Tyres its first European Championships title at its first international race.

Congratulaion also to Felix Robert’s mechanic and to Stefan Habbecke of MSE Mugen.

Also present at the European Championship using Contact Tyres was Robin D’Hont. Robin suffered a few technical problems solved only in the last 2 qualifiers only allowing him to qualify in the semi.

After a good start Robin’s car was hit by another car during the close fight and he was not able to restart.

Big shame for Robin as he looked really ready to make the final.

Robert and Robin used Lightweight Contact rims which we will add to our listings.