Having recently reviewed Axial’s new 4-wheel-steering Capra, I was inspired to convert our test Capra to mimic its newly improved sibling. Four-wheel steering, or 4WS as I’ll be referring to it, is just what it sounds like—steering at both the front and the rear wheels of the vehicle for improved turning capability and maneuverability. This is especially handy for a crawler, which benefits from the exacting precision of the 4WS design. What I found when researching the conversion is that it is actually quite simple and only requires a handful of necessary parts along with a couple hours of time. Follow along as we go over the process.

We will need a mirror copy of the front axle, along with the associated steering components. Below you will find two lists—one for required parts, and another for parts that can be reused from the original rear axle, along with a full set of reference photos and associated part numbers. This collective parts list will build an entire steering axle that is ready to bolt on. 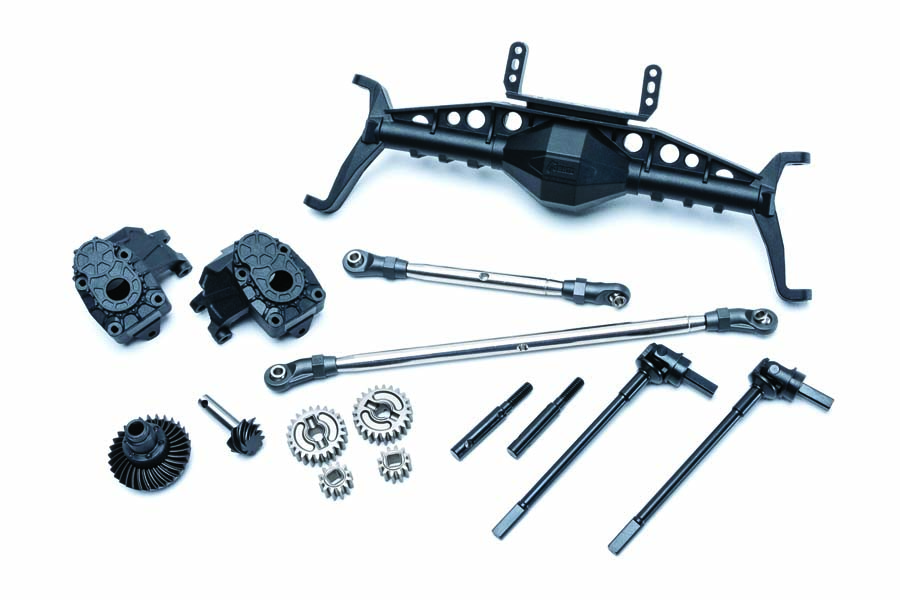 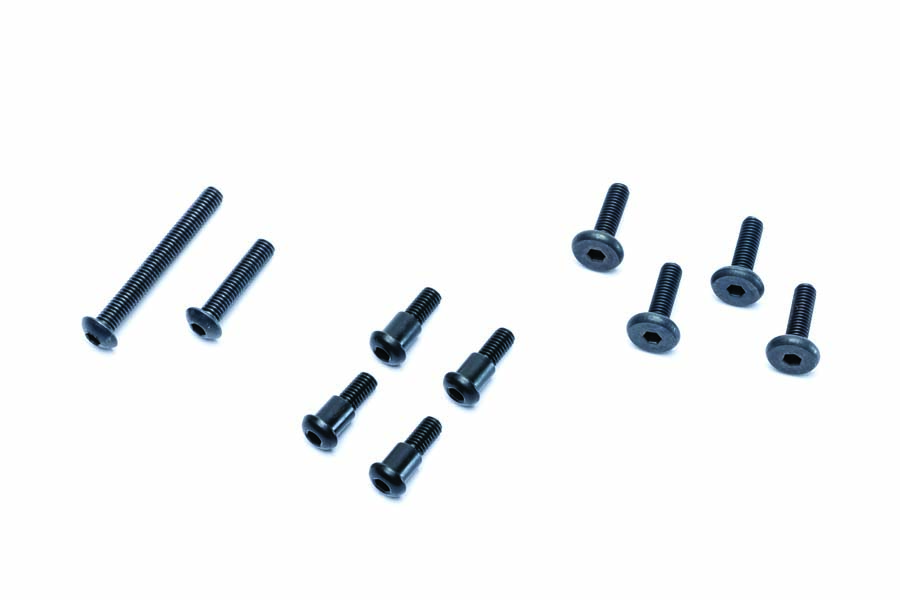 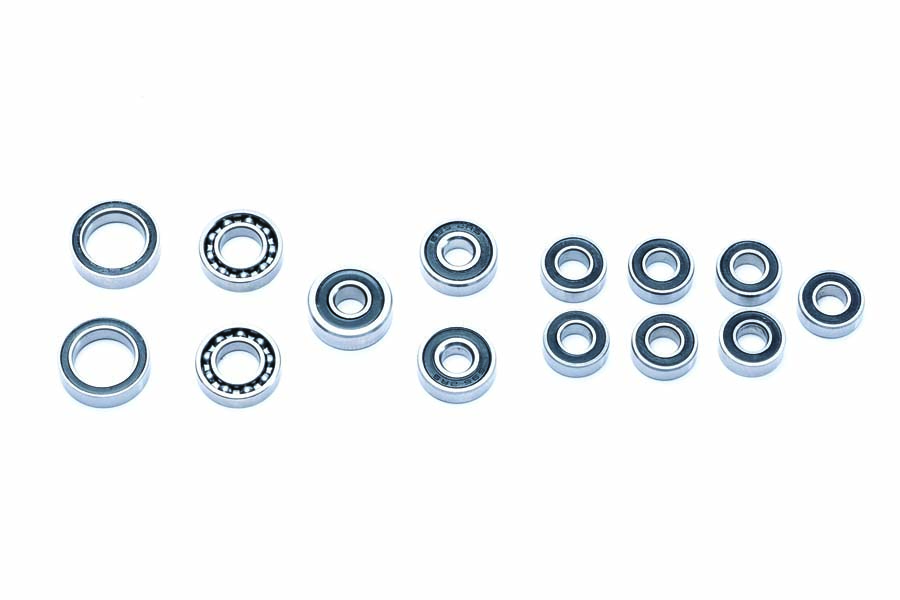 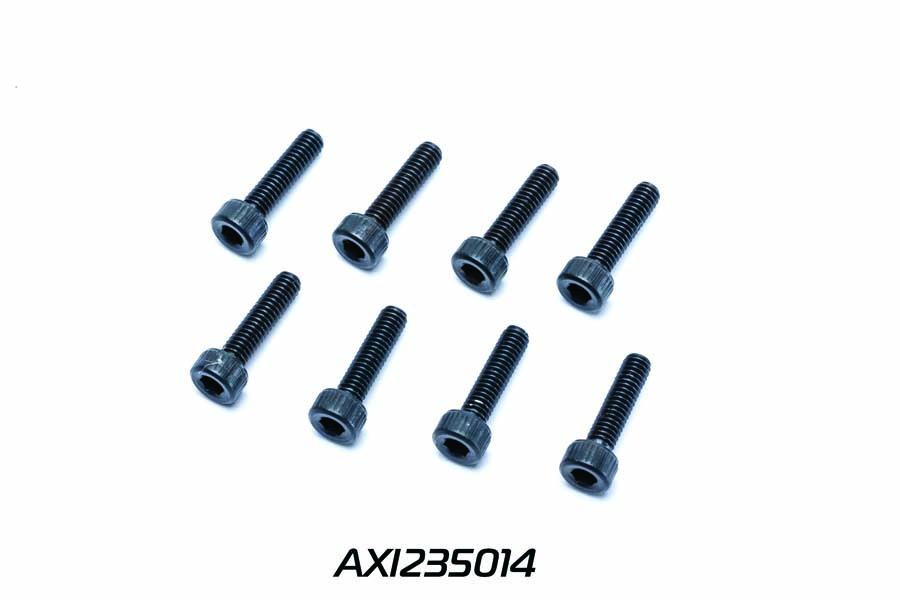 To accommodate our newly added 4WS capabilities, we will need a transmitter that’s up to the task. Many mid-range and high-end radios will have built-in 4WS capability. All you need to do is go into your radio’s menu and dial in the proper settings. I personally use a Spektrum DX5 Pro (shown in the photos), as well as a KO Propo EX-II, both of which have 4WS steering capabilities. You will also need a 4-channel receiver to accommodate the new rear-steering servo alongside the Dig transmission servo.

Assemble the axle just as you did with the original front part. Take care to properly grease the bevel and pinion gears as well as the portal gears before assembly to ensure a long and reliable service life. Reuse the original wheel hexes and spacers from the rear axle. 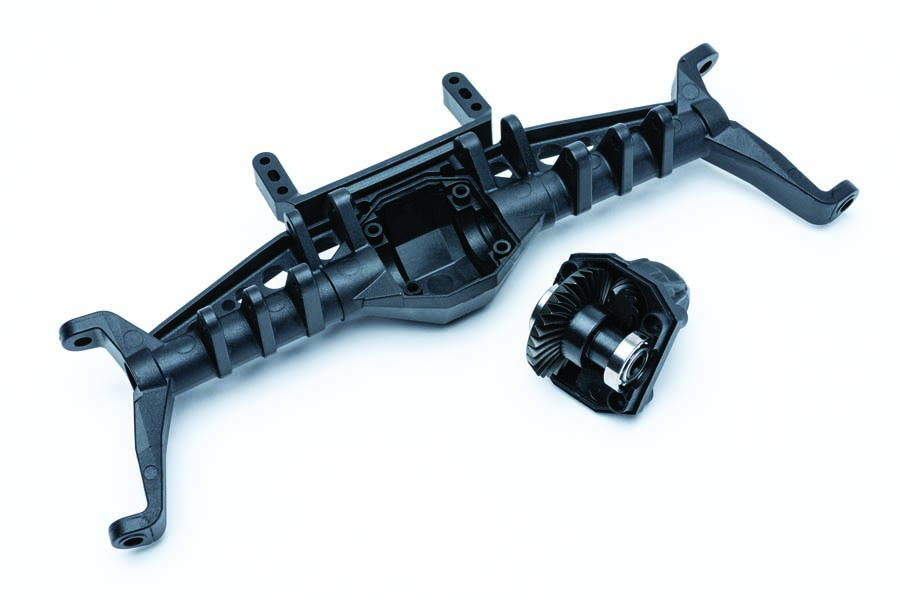 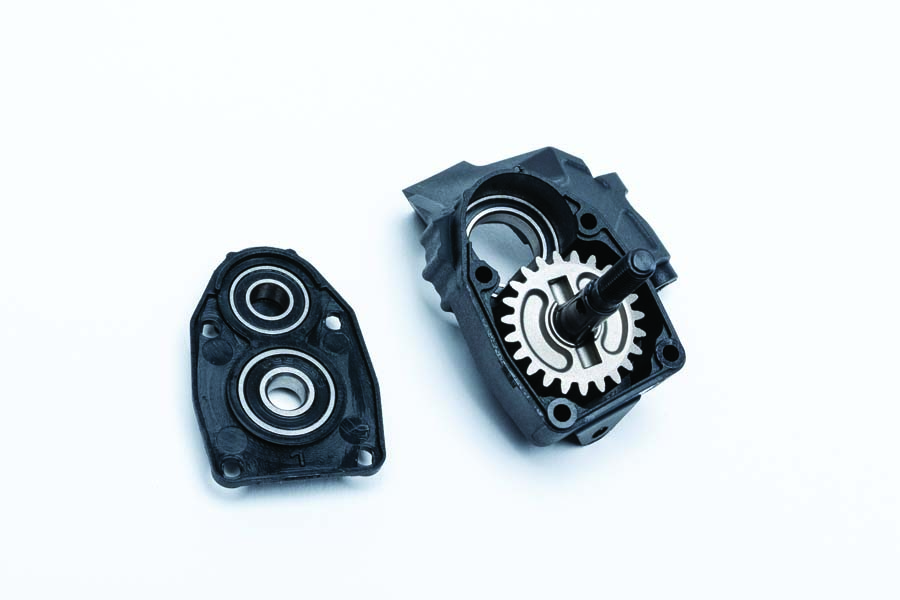 Thanks to the symmetrical design of the front and rear suspension links, swapping the original rear axle with the new unit is as simple unbolting the old part and installing the new one. 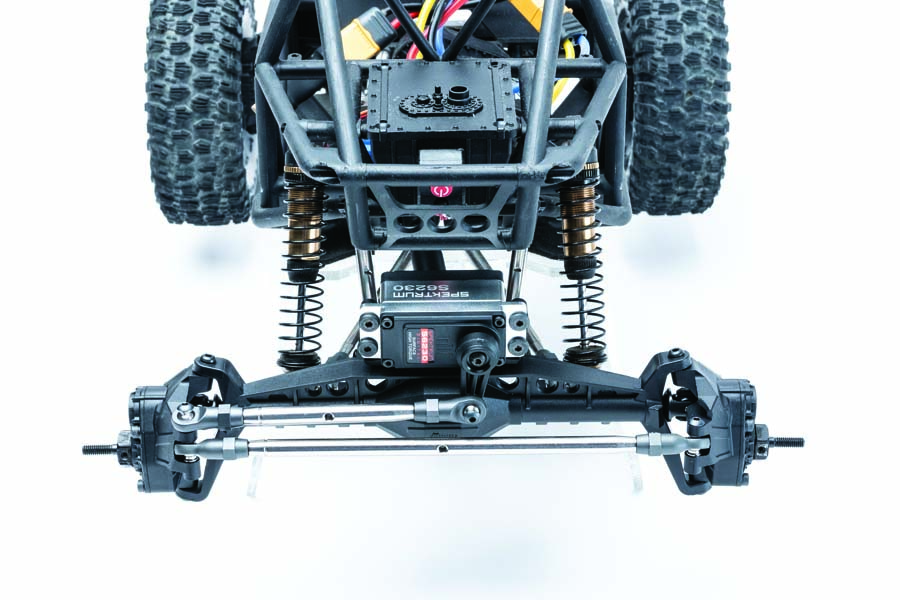 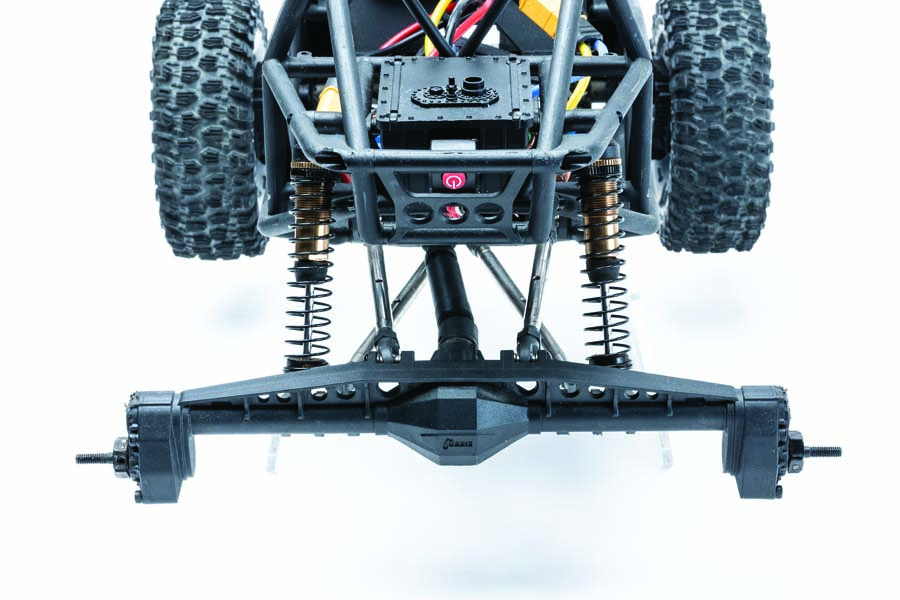 Since the original roll cage was not designed with enough clearance for a rear servo, the back portion of the cage hits the top of the servo and limits suspension travel. To remedy this, we need to make some space by trimming a couple points of the rear cage. 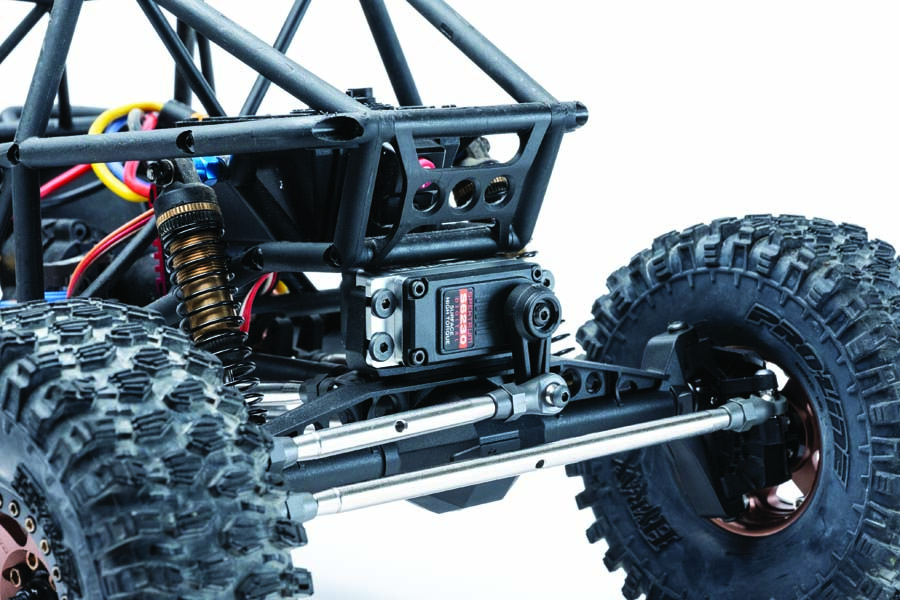 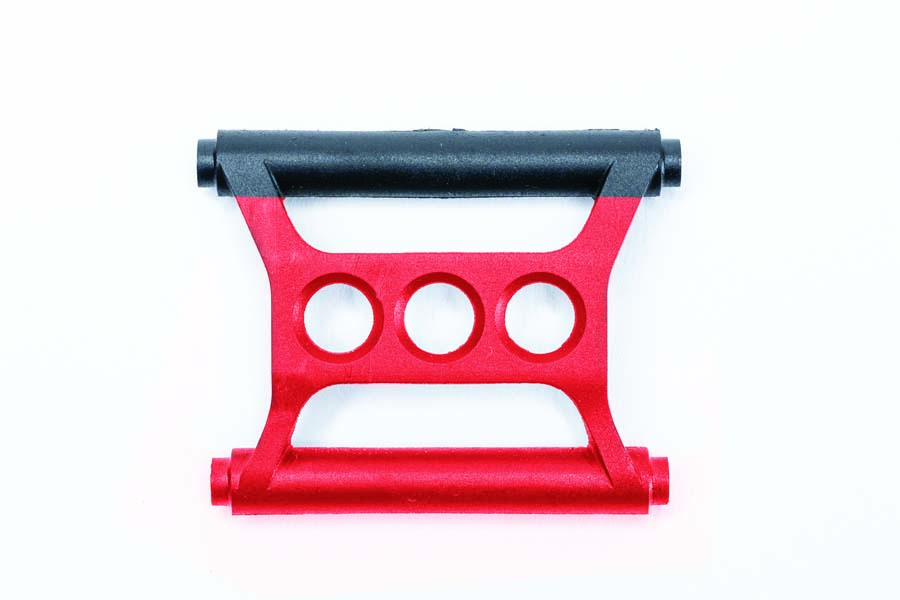 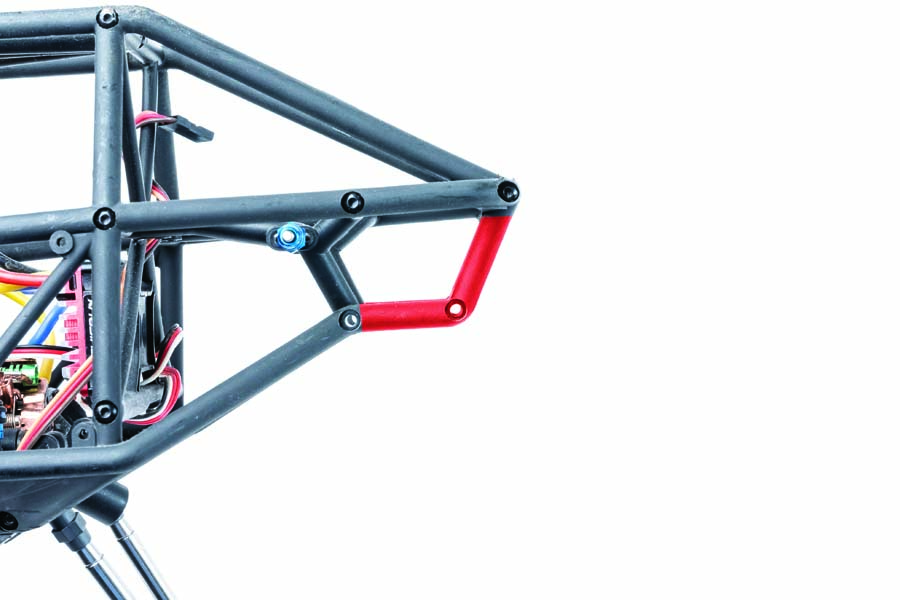 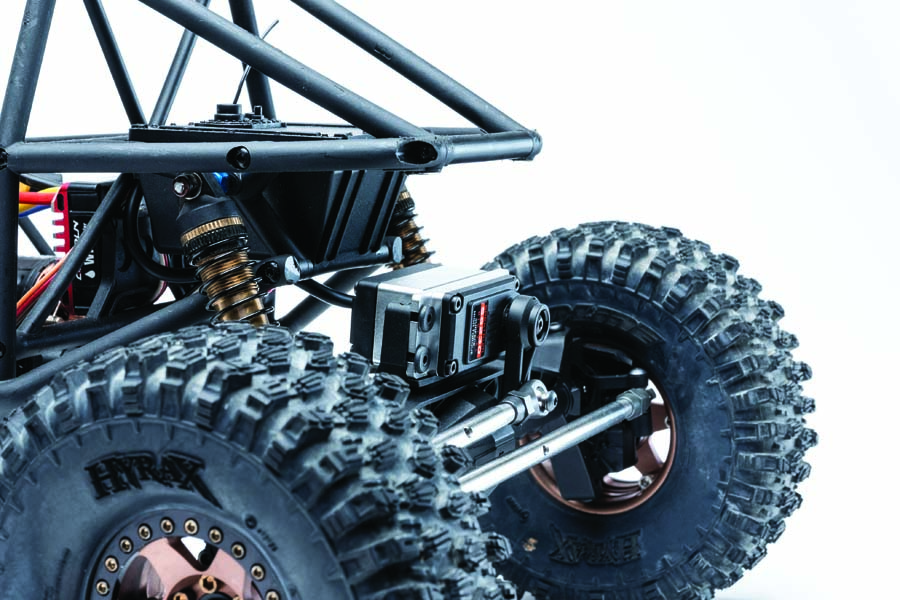 First thing we need to do is loosen and remove the rear cage brace. This is the main structural brace of the rear-most part of the roll cage. Cut away the middle portion of the brace along with the lower crossbar (shown in red), leaving only the top crossbar when we are finished.

Next up, cut away the lower-most area from the rear of the cage (shown in red). Make sure to cut at the same spot on both sides. This can be easily done using a cutoff wheel on a rotary tool.

Once done, this trimming will clear plenty of space for the newly added rear steering servo, allowing for full suspension compression and articulation. I highly recommend using low-profile steering servos since we don’t want to compromise the sealed receiver box. I opted to install a pair of Spektrum S6230 high-torque servos for this exact reason. A review of the S6230 servo can be found in this month’s Test Bench. 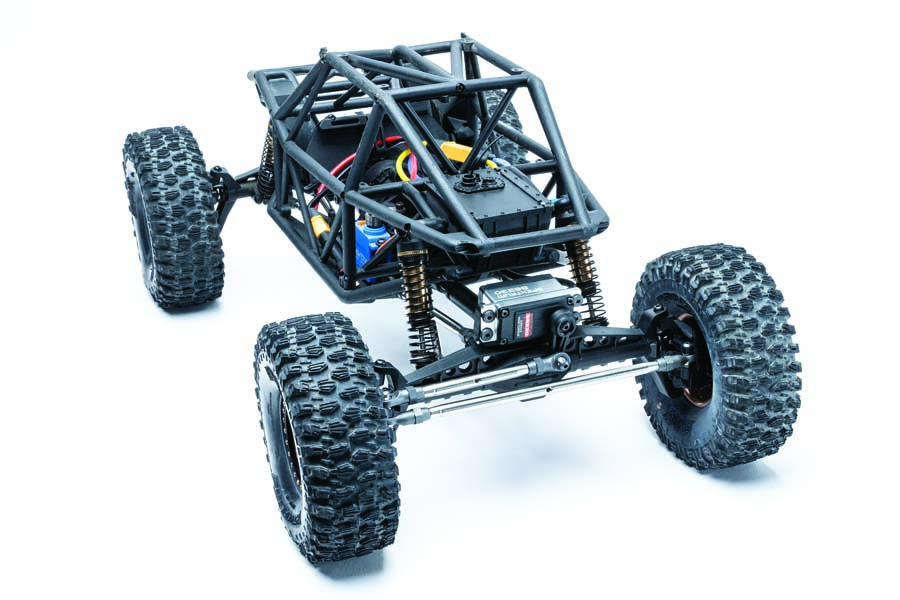 And there you have it. Converting our original Axial Capra to include 4-wheel steering is a simple and straightforward process. All you need is a few parts, a bit of time, and the proper radio. With the newly added 4WS functionality I instantly noticed a huge increase in the steering performance and maneuverability of the vehicle, allowing us to conquer a ton of potential obstacles that we couldn’t have before. As always, thanks for joining us for this brief write-up. We hope you found it helpful. See you in the next one!

Text and Images by Lauren Short