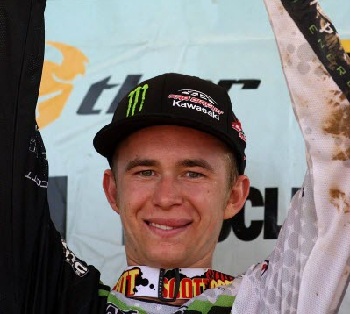 Pro Circuit/Kawasaki/Traxxas rider Blake Baggett (#57) claimed his second overall win of the season with an impressive 1-1 finish at the third round of the AMA Motocross Championship Series at High Point Raceway in Mt. Morris, PA. Tyla Rattray (#28) showed off his speed with a 3-2 finish for second overall and took over the points lead from his teammate Dean Wilson (#15). Rattray is now the third Monster Energy/Pro Circuit/Kawasaki rider to hold the red plate in three races. After finishing second in the first moto, Wilson went down on the opening lap and ended the day in fourth with a 2-8 finish. Broc Tickle (#20) had the best showing of the season with a 10-4 for fifth.

After a tough Round 2, Baggett found redemption with a 1-1 come-from-behind finish in Western Pennsylvania. Starting off in ninth in Moto 1, Baggett had his work cut out for him, but managed to pick off all of the riders in his path to eventually taking the moto win by almost 12 seconds. His second moto also saw him come back after going down, but he still managed to move into the lead and win by 14 seconds.

“I was ready to redeem myself after Freestone,” said Baggett. “I knew the second moto was going to be tough after it rained. I ended up crashing pretty good, but was still feeling confident that I could catch Tyla. I am really happy to feel good again and hope I can make it through Budds Creek with another good finish.”

In the first moto, Rattray showed his endurance with a last lap charge for third to end up on the Moto 1 podium. The second moto put him out front after Baggett went down, but he would eventually come out of the moto as the runner-up. With his 3-2 finish at High Point, Rattray took over the points lead from his teammate Wilson.

“It’s nice to have the points lead, but I’m not going to be thinking too much about that right now,” said Rattray. “I just want to put in solid finishes week after week and hopefully I can be there at the end. I feel good right now and I am going to work hard this week to try and get another good finish at Budds Creek.”

Although he finished second in the first moto, Wilson had to overcome a crash on the opening lap of the slippery second moto. He remounted in 20th and began to pick off riders on the tough track. He would eventually break into the top-10 and finish in eighth to finish just off the overall podium in fourth with a 2-8.

“I am really bummed that I keep putting myself in good position and somehow I manage to keep myself from the win,” said Wilson. “I know the track was really slick, but I got a little too eager on the opening lap. We are headed to Budds Creek where I got my first win so hopefully I can bring it all together there for my first of the season.”

Finishing with his best overall of the season, Tickle proved he could come-from-behind and show off his speed. In the firstmoto, he got pushed out on the start and came across the first lap in 20th. He made smart passes and worked his way into 10th. He was ready to redeem himself the second moto and kept it on two wheels to finish in fourth. His 10-4 score was good enough for fifth overall.

“It’s good to start making progress and see the improvement,” said Tickle. “I have been feeling good, but the results haven’t been showing that. I just wanted to prove that I could ride well outdoors and today was a good step in the right direction. Hopefully we can do it again next week.”

The Monster Energy/Pro Circuit/Kawasaki team will be heading to Budds Creek MX in Mechanicsville, Md this weekend. Rattray currently leads the 250 Motocross class with 127 points, while Wilson remains close with 125 in the runner-up spot. Baggett moved into third with 116 points, and Tickle’s good finish keeps him moving up the leaderboard in eighth with 67 points.